Cardiac amyloidosis (CA) is an infiltrative disease primarily caused by extracellular tissue deposition of amyloid fibrils in the myocardial interstitium (1). In normal situation, the cyclic left ventricular (LV) twisting deformation is resulted from clockwise LV basal rotation and counterclockwise LV apical rotation due to complex motion of two orthogonally oriented muscular bands of the LV helical myocardial structure (2). Three-dimensional (3D) speckle-tracking echocardiography (STE) is a new imaging technique with potential for noninvasive assessment of this LV myocardial movement (3). The aim of the present study was to examine LV rotational mechanics in CA by 3DSTE.

Ten patients with CA entered the study. All living CA patients who were treated and managed by the outpatient clinic or the haematology division of our center were involved in the present work. The diagnosis of CA was confirmed by biopsy in all subjects. The first positive biopsy site was myocardium in four cases, bone marrow in one case, duodenum in one case, salivary gland in one case, colon in one case and kidney in two cases in CA patients. CA proved to be AL amyloidosis in eight cases and transthyretin amyloidosis in two cases. Heart involvement was defined as mean LV wall thickness (half of the sum of ventricular septum and posterior wall thickness) >12 mm at echocardiography in the absence of other cardiac diseases and/or by biopsy, according to the International Society for Amyloidosis criteria (4). All cases have been included in the MAGYAR-Path Study (Motion Analysis of the heart and Great vessels bY three-dimensionAl speckle-tRacking echocardiography in Pathological cases). The institution’s human research committee approved the study, and informed consent was obtained from each patient. The study protocol conformed to the ethical guidelines of the 1975 Declaration of Helsinki.

Toshiba ArtidaTM echocardiography equipment (Toshiba, Tokyo, Japan) with PST-30SBP (1-5MHz) and matrix PST-25SX (1-4MHz) phased-array transducers was used for routine two-dimensional (2D) Doppler echocardiographic and 3DSTE studies. 3DSTE was performed regarding to recent practices detailed previously (3). Shortly, six wedge-shaped subvolumes were acquired from the apical window within a single breath-hold. A full-volume pyramidal 3D dataset was then created automatically, in which LV chamber quantification was performed offline using 3D Wall Motion Tracking software version 2.7 (Toshiba Medical Systems). LV was analysed in apical 4-chamber (AP4CH) and 2-chamber (AP2CH) views as well as in three short-axis views which were selected automatically from the 3D dataset by the software. A virtual 3D model of the LV was created following manual definition of the LV endocardium at the edges of the mitral valve and the LV apex on AP2CH and AP4CH views. Automatic reconstruction and tracking of the endocardium throughout the cardiac cycle were then obtained. For quantification of 3DSTE-derived global peak apical, midventricular and basal LV rotations were calculated for each patients.

Clinical and 2D echocardiographic characteristics of CA patients are presented in Table 1. LV rotational characteristics of each CA patients are presented in Figures 1 and 2. Although a relatively small number of CA patients were examined, LV basal and apical rotations were in the same counterclockwise direction in 6 out of 10 CA patients demonstrating near absence of LV twist [LV rigid body rotation (RBR)]. Apico-basal difference was near 3 or less degrees in three patients, and 6–10 degrees in the other three subjects with LV-RBR. One another patient showed normal rotational mechanics, while two patients had significant hyporotations and one had significant hyperrotations in normal directions. The mean basal LV rotations were 0.3±3.8°, while mean apical LV rotations proved to be 7.0±3.3° in CA patients. 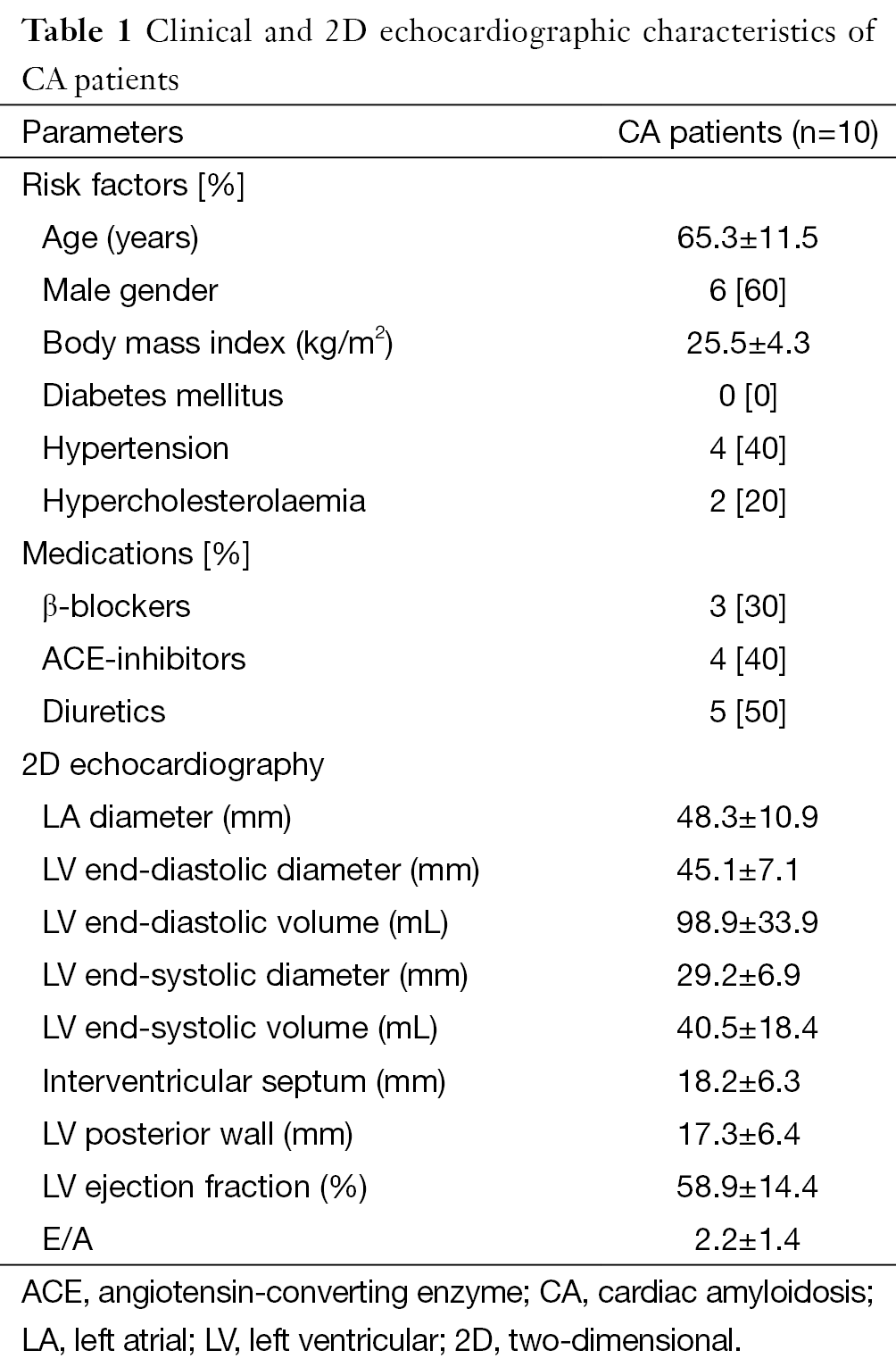 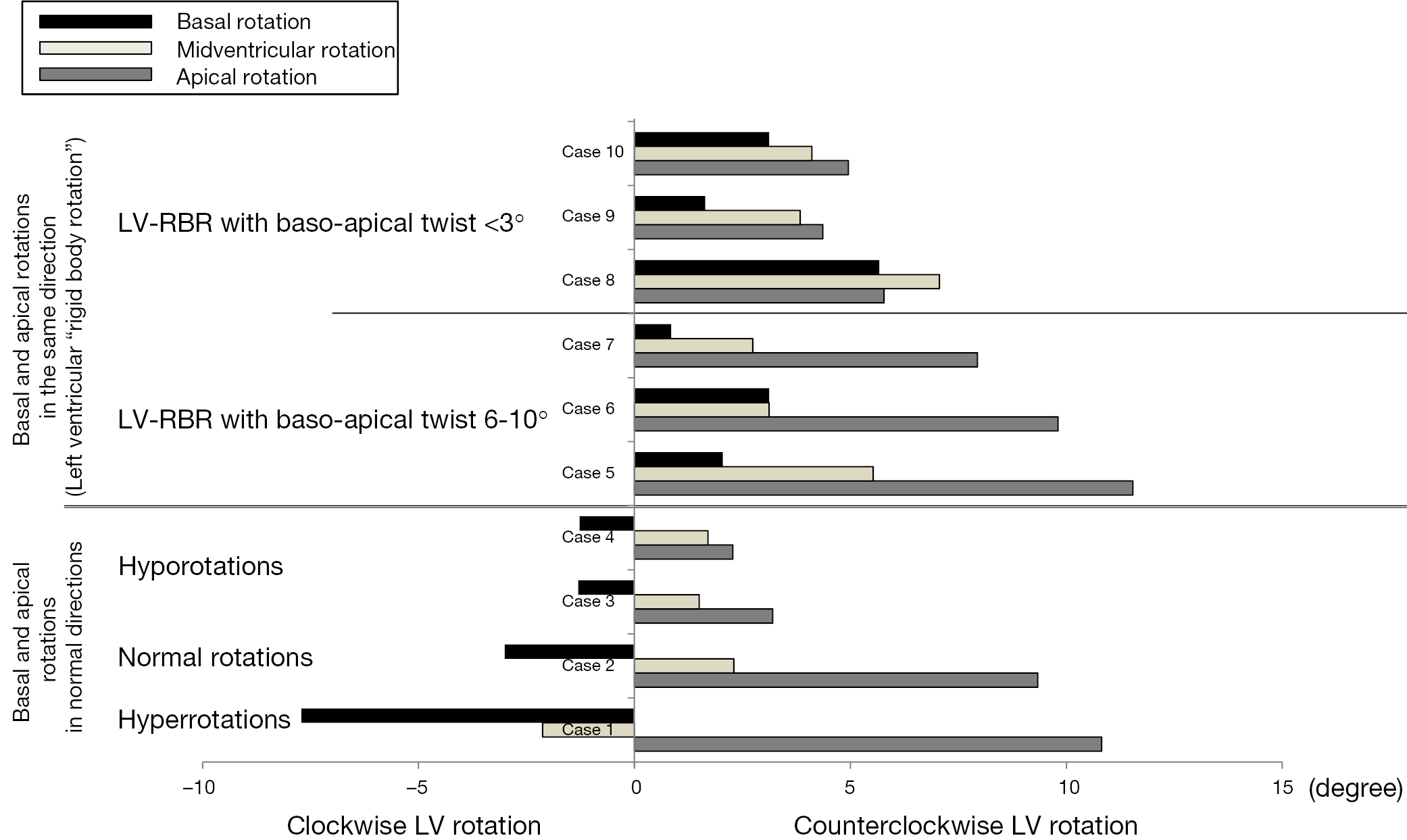 It is known that amyloid fibrils disrupt tissue architecture and the pre-fibril oligomers are directly toxic to myocardiac cells (5). Due to these facts cardiac dysfunction and heart failure are frequent findings in CA. Moreover, cardiac involvement inversely correlates with survival (6). Although LV twist is an essential part of LV function, the number of clinical studies in which LV rotational mechanics has been evaluated in CA is limited (7-10). Regarding to the available literature, basal LV rotations have been found to be −4.0±4.4° (7,8), −0.6±3.4° (9) and −2.9±2.5° (10) in CA (our results proved to be 0.3±3.8°). The apical LV rotations were 5.0±2.4° (7,8), 1.1±9.4° (9), 9.3±3.0° (10) and 7.0±3.3° by the same authors. These results show large diversity and suggest that apical and basal LV rotations and, therefore, LV twist are severely reduced in the presence of CA. However, due to relatively large standard deviations of rotational data of CA patients it was suggested to be managed separately in the present study. Different patterns of LV rotational mechanics including normo-, hypo- and hyperrotations of basal and apical segments in normal directions could be demonstrated in some CA patients. However, LV-RBR seemed to be a frequent phenomenon in CA. This finding could be partially explained by the above mentioned effects of amyloid fibrils, by other reasons could not be excluded.

Treating symptomatic CA is based on two options: therapy of heart failure and treatment of the underlying disease (11). For the underlying disease, the main therapy is chemotherapy mainly bortezomib-based regimens, high-dose melphalan with autologous hematopoietic cell transplantation (HCT) in certain cases. Regarding the cardiac therapy, loop diuretics, beta blockers and angiotensin-converting enzyme inhibitors are used, sometimes heart transplantation could be an option. Heart transplantation needs to be followed by high-dose chemotherapy and autologous HCT within 12-month period in certain cases (11,12). The prognosis was evaluated in a study of 346 stage III CA patients treated with standard chemotherapy. The median survival proved to be 7 months, with 24% surviving rate until 24 months. The overall haematologic response rate was 33%, including a complete response rate of only 12% (13).

To conclude with, significant alterations in segmental LV rotation could be demonstrated in CA including frequent exist of LV-RBR. Further studies with larger number of CA patients are warranted to confirm our findings with deeper insights into pathomechanism evaluating the relationship between different rotational subgroups of CA patients and other LV volumetric and functional properties, especially with newer echocardiographic techniques like 3D and/or STE.