Prognosis and clinical characteristics of patients with early ventricular fibrillation in the 6-week guideline-offered time period: is it safe to wait 6 weeks with the assessment? (results from the VMAJOR-MI Registry)

The most common early lethal complication is an early ventricular fibrillation (EVF) following acute coronary syndrome (ACS) or acute myocardial infarction (AMI) (1,2). Ventricular arrhythmias occur in 80–85% within 48 hours after the event. Early or primary ventricular fibrillation (PVF) develops in 48–72 hours after the start of the myocardial infarction (MI) symptoms and has no relationship to any recurrent ischaemia or heart failure.

The rate of death, including sudden cardiac death (SCD) is the highest in the early phase after a MI. There is no special guidance, how to treat MI patients suffering EVF, no protocol about their secondary prevention, among others early implantable cardioverter defibrillator (ICD) implantation. Current guidelines do not suggest prevention of SCD within 40 days (3). According to the guidelines, ICD therapy is recommended to prevent SCD for patients with symptomatic heart failure (NYHA Class II–III) and left ventricular ejection fraction (LVEF) ≤35% despite optimal medical therapy but just 6 weeks past the event. Earlier (<40 days) ICD implantation or the use of wearable cardioverter defibrillator may be considered in a selected patient group—incomplete revascularization, pre-existing LVEF dysfunction or occurrence of malignant arrhythmias 48 hours after ST-segment elevation MI (STEMI) (1,4). However, there are conflicting results regarding the prognosis of EVF survivors (2,5). EVF has a significant effect on in-hospital mortality (6). Even in the percutaneous coronary intervention (PCI), PCI-era, acute phase of ventricular tachyarrhythmia (VT) or ventricular fibrillation (VF) was associated with higher in-hospital mortality in case of STEMI (7). Solomon et al. found that the risk of SCD is the highest within 30 days after the MI in patients with reduced EF or heart failure. The rate of SCD is 1.4% in the first month, and 0.14% in 2 years (8). On the other hand there are results suggesting that prophylactic ICD therapy does not reduce overall mortality (3), not even in high-risk patients but was associated with reduction of death due to arrhythmia (9).

In a high-volume, modern PCI-centrum, in order to be able to manage the great number of patients, after couple of days they are either discharged home, to a rehabilitation facility or transferred to another hospital for further evaluation.

The present study was designed to assess the survival of MI patients with EVF after the guideline recommended 6-week time period. It is evident that the patients’ general condition has an effect on the prognosis. But there is no data whether it is safe to wait 6 weeks with the decision. There may be a high-risk patient group that would benefit from an early judgment and more specialised treatment at a cardiac centrum. In order to find the clinical characteristics of the high-risk patients, we aimed to examine whether the general condition of the patients at discharge has any relation to the prognosis.

A total of 11,582 patients with ACS have been revascularised between 2005 and 2013 at our Institution. These consecutive patients were enrolled to a registry, named Városmajor Myocardial Infarction Registry (VMAJOR-MI Registry), in which all the available demographic (gender, date of birth, date of admission, date of death) and clinical patient data—laboratory findings [troponin T, creatine kinase-MB (CK-MB), creatinine, glucose, cholesterol, low-density lipoprotein (LDL)-cholesterol], type of infarction [STEMI, non-STEMI (NSTEMI)]—results from echocardiography (LVEF), coronary angiography—have been summarised. The acute event has been characterised by its severity—complicated by EVF, cardiogenic shock, on site resuscitation—and by its complications—heart failure, invasive respiratory treatment. EVF-positive patients’ data has been supplemented by the following factors: laboratory parameters [potassium, white blood cell (WBC) count, C-reactive protein (CRP)], detailed coronary-status (number of vessels affected, number of vessels treated by PCI).

Two groups were created based on the fact that AMI was complicated by EVF or not. VF requiring defibrillation in the first 48 hours of the peri-hospital period was used as a definition of EVF. Other types of ventricular arrhythmias, such as ventricular tachycardia was not examined. Patient group with EVF was further divided regarding their general condition (good vs. poor). We evaluated the patients’ clinical characteristics at discharge. Patients who were released home or to a cardiac rehabilitation facility and did not require further in-patient cardiac care (no heart failure, no recurrent malignant arrhythmia) created the good general condition patient group. To the poor general condition group, we enrolled patients who died at our institution or were transferred to another department on invasive respiratory treatment or needed further in-patient cardiac care because of heart failure, arrhythmias or any other even non-cardiac reasons.

Only patients with primary revascularization were included into the study which was defined as PCI in the first 12 h of symptom onset (10). Patients undergoing coronary artery bypass grafting surgery were not eligible for the study, as well as we excluded those who were managed conservatively. Coronary stenosis was evaluated from multiplane projections and a luminal diameter reduction of >50% was considered significant.

The study protocol conformed to the ethical guidelines of the 1975 Declaration of Helsinki and was approved in advance by the locally appointed ethics committee (30088-2/2014/EKU). The primary outcome of the study was all-cause mortality. The National Health Care Institute provided the accurate details on the above endpoint with occurrence dates.

The analysis was performed using Statistica 13.2 statistical software. Continuous variables were expressed as mean and standard deviation (mean ± SD), categorical variables were summarized as sample size (n) and frequencies. For assessment of normality of distribution, Shapiro-Wilks test was used. Levene’s test was used to evaluate homogeneity of variances. Student’s t-test was used for comparison of normally distributed data and Mann-Whitney U test for not normally distributed data. Categorical variables were compared using Chi-square test. For offline data analysis and graph creation a commercial software package was used (Microsoft Excel 2016). 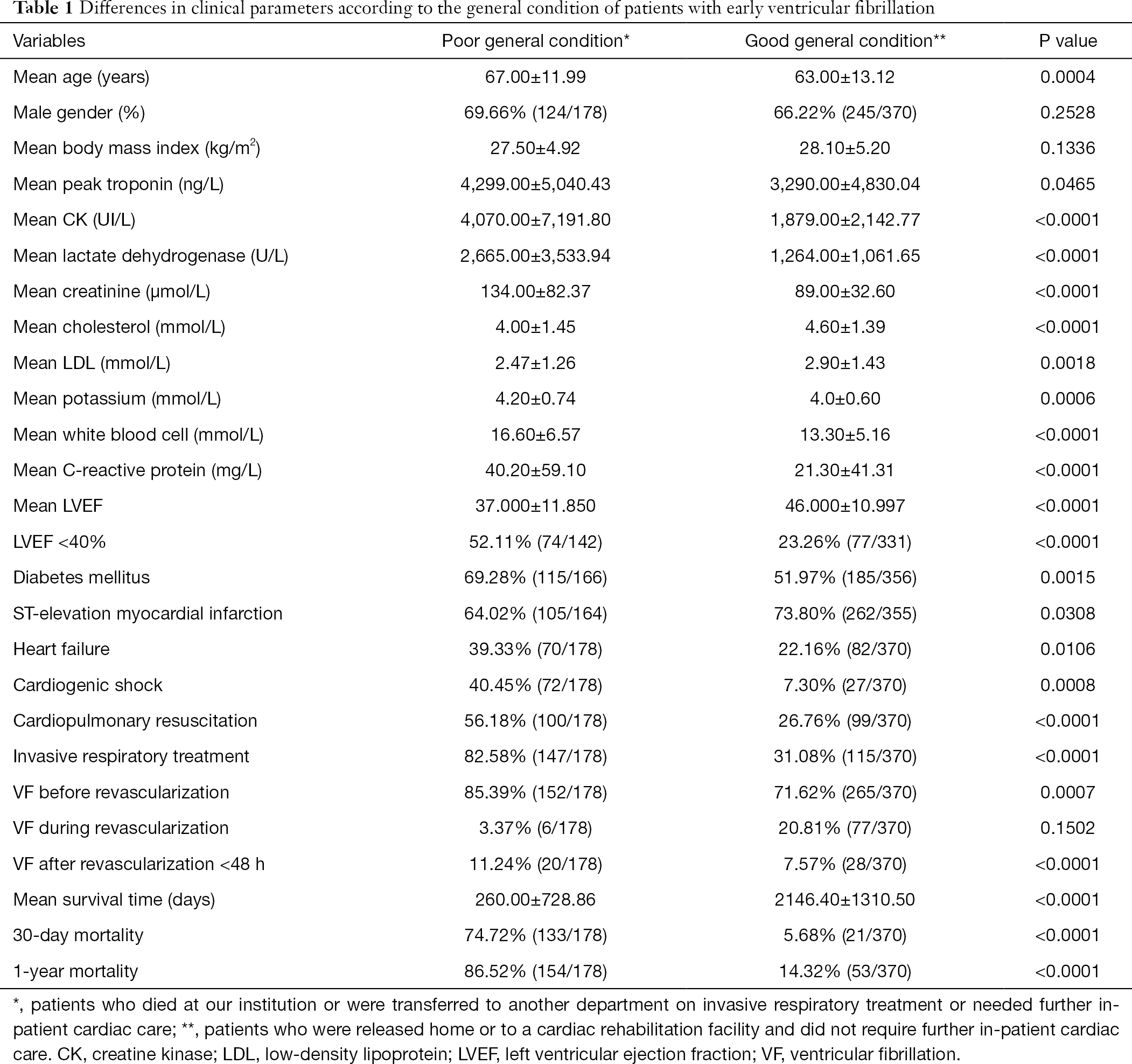 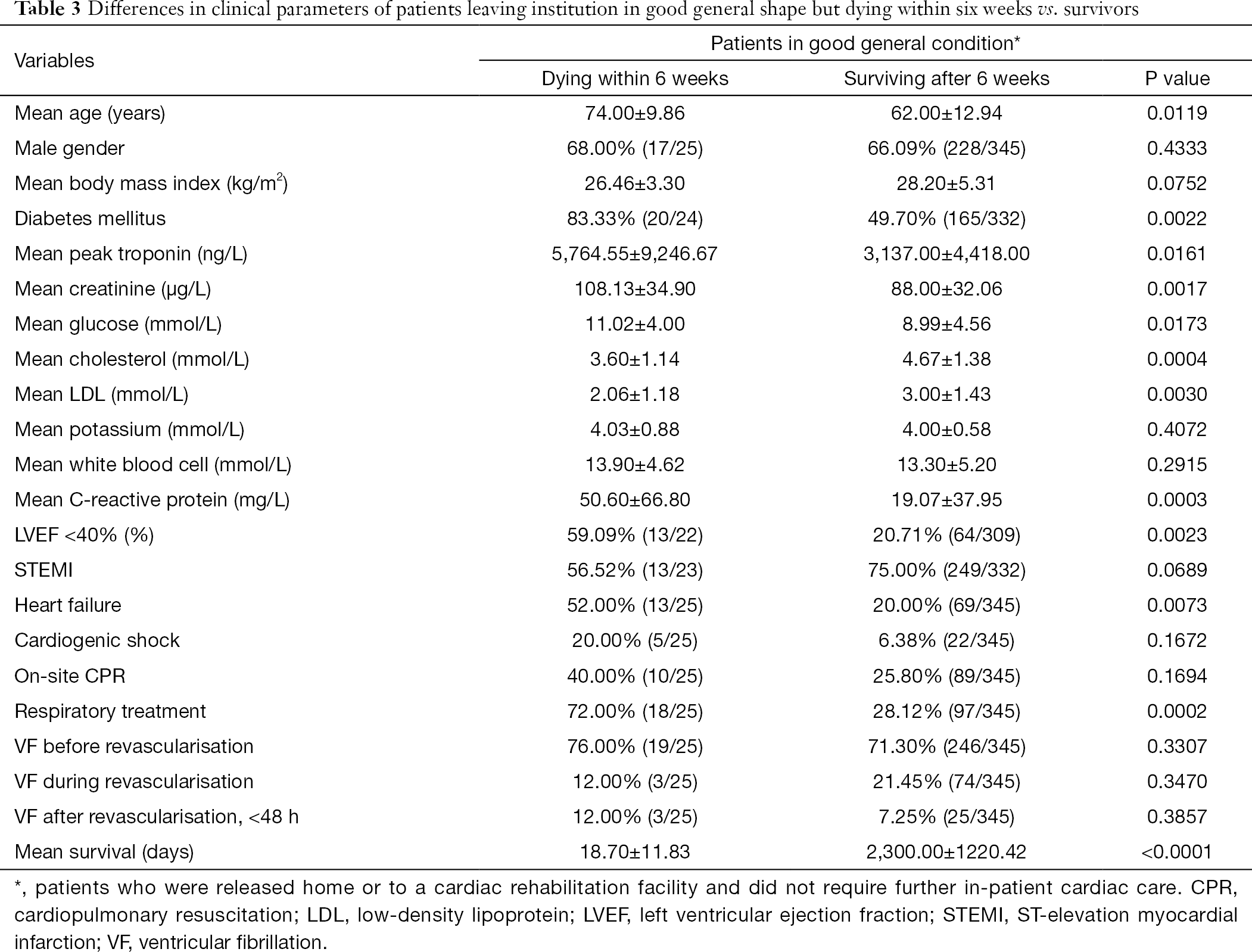 Our results are based on a registry in which the data of the index ACS has been collected between 2005 and 2013. We use this database as background for long-term follow-up. This timeframe does not affect the results, since the guidelines and the policy of our institute about revascularisation have not change.

Following AMI there is an increased risk of SCD, especially showing reduced LVEF (<40%) or frequent ventricular premature beats (VPBs). In high-risk post-MI patients, the risk of arrhythmic death (AD) is higher for up to 2 years. However, risk stratification for ICD would be optimal in the first 6 months, noticing that the chance for both arrhythmic and non-AD is the highest within 6 months (11). Theoretically, ICD implantation following AMI and revascularization would save lives due to presence of higher SCD incidence (12). Although ICD implantation for both secondary and primary prevention has been shown reducing all-cause mortality, DINAMIT and IRIS trials demonstrated that early ICD implantation within 40 days does not reduce mortality in high-risk post-MI patients. These findings could be explained by the increase in death due to non-arrhythmic causes (e.g., heart failure, free wall rupture etc.) (3,9). Based on these results ICD implantation for primary prevention in post-MI patients is recommended later than 40 days (1,13). In AMI, the incidence of ventricular arrhythmias including EVF is about 2–8% (1,2). However, results according to its significance on prognosis is controversial. Masuda et al. stated that acute phase VT/VF associated with in hospital mortality even in the PCI era, moreover with increased 5-year mortality in high-risk patients (GRACE Risk Score >115) (7). In the era of routine primary PCI era in STEMI although overall STEMI mortality declined, PVF remained as predictor for 30-day and 1-year mortality (14). Results from the database of APEX-AMI trial showed increased 90-day mortality in patients with VT/VF presenting for primary PCI (15). On the other hand the prospective GISSI-2 trial revealed that both early (<4 h) and late (4–48 h) PVF was an independent risk factor for in hospital death but post-discharge to 6 months prognosis was unaffected (16). Other studies found similar results, EVF had significant effect only on in-hospital mortality (6,17). High short-term survival was detected by STEMI patients undergoing PCI and receiving drug eluting stents (18).

Seeing these conflicting results about the post-discharge prognosis of EVF patients, comparing patients based on their general condition at discharge had the following result. Higher age, larger infarct size—meaning higher biomarker levels (troponin T, CK), higher LDH, inflammation (WBC count, CRP levels), more comorbidities (diabetes, poor renal function), more severe acute event resulting in cardiogenic shock, heart failure correlates with poor general condition. These patients had significantly lower mean survival time, high 75% short-term, 30-day and high 86.5% long-term, 1-year mortality. Being sad that they remain a high-risk patient group who would benefit at least from a closer follow-up in the 6-week time-period recommended by the guidelines. Gheeraert et al. found that out of hospital VF in patients with AMI has angiographic determinants (19). Considering that the amount of myocardium at risk may have an effect on prognosis, we found that the extent of the CAD resulted in higher 6-week mortality only in high-risk patients, in the poor general condition patient group. Mortality and the extent of the disease in patients with good general condition were not related. The technological impact of advances on PCI revascularization has not affected our results, being sad that our institute’s invasive approach has always been high. PCI rates in NSTEMI patients with EVF (81%, 122/151) exceeded percentage seen in literature (20).

We could select those patients in good general condition who have low mortality risk in the critical 6-week period—before they are assessed whether to get an ICD or not. However, age, diabetes, reduced LVEF, larger infarct size (higher troponin level), NSTEMI, reduced kidney function count as risk factors for dying within 6 weeks in spite of the good general condition. Overall comparing 6-week mortality characteristics of EVF− patients to EVF+ cases in good condition, there is no significant difference between the two groups.

The general condition of the patients at discharge influence the prognosis. Patients with poor general condition and those in good general condition but having NSTEMI, reduced LVEF may benefit from a closer follow up at a high volume invasive cardiac centrum employing telemedicine devices. In assorted cases earlier ICD implantation would be beneficial. In conclusion, it is safe to say that there is a low risk of dying within the 6-week time period offering by the guidelines.

The most important limitation is that the present study was a retrospective observational study with its special limitations. Factors affecting the prognosis such as medication intake, compliance could not be investigated.

Conflicts of Interest: All authors have completed the ICMJE uniform disclosure form (available at http://dx.doi.org/10.21037/qims-20-973). AN serves as an unpaid editorial board member of Quantitative Imaging in Medicine and Surgery. The other authors have no conflicts of interest to declare.

Ethical Statement: The study protocol conformed to the ethical guidelines of the 1975 Declaration of Helsinki and was approved in advance by the locally appointed ethics committee (30088-2/2014/EKU).