As a significant cause of death and disability, coronary heart disease (CHD) can result in myocardial infarction (MI), ischemic cardiomyopathy, and ischemic mitral insufficiency, leading to left ventricular (LV) remodeling (1). Major cardiac remodeling can cause progressive deterioration of cardiac function (2-5). The remodeling process often involves increases in myocardial mass. Irrespective of etiology, LV hypertrophy, and increased LV mass are independent risk factors for cardiovascular mortality and morbidity (6-8). In patients with CHD, MI, or hypertension, LV hypertrophy leads to a 2- to 4-fold increase in the incidence of death or nonfatal complications (6).

Coronary artery bypass grafting (CABG) is an effective procedure for treating CHD. Along with the aging of the population and improvements in percutaneous coronary intervention (PCI), the complexity of patients referred to CABG is increasing, and so too are the rate of the patients with LV remodeling and LV hypertrophy. The current systems for evaluating the outcomes of cardiac surgery, including the European System for Cardiac Operative Risk Evaluation (EuroSCORE) and the EuroSCORE II, do not consider the impact of LV mass and geometry on surgical outcomes, which hold significant prognostic value (9).

Despite the association between the prognosis of CHD, MI, or hypertension and LV hypertrophy, there is still uncertainty about whether LV geometry, left ventricular mass index (LVMi), and relative wall thickness (RWT) have independent prognostic value on the outcomes of CABG (10). This study aims to explore the prognostic value of LV geometric patterns in CABG patients.

The institutional ethics board approved the study of Rui Jin Hospital (No. 2018-15), and informed consent was obtained from all patients. We enrolled patients between January 2012 and September 2016. Patients who underwent CABG and had available preoperative echocardiographic recordings met the criteria for inclusion in this study. Patients undergoing emergency surgery repeated CABG, or undergoing other procedures in addition to CABG were excluded from the study.

Echocardiography was with recommendations from the European Association of Cardiovascular Imaging (EACVI) and the American Society of Echocardiography (ASE), using commercially available systems (11,12). The preoperative echocardiography in this study was transthoracic. Echocardiographic variables include posterior wall thickness at end-diastole (PWTd), left ventricular end-diastolic internal diameter (LVIDd), and interventricular septum thickness at end-diastole (IVSTd). Figure 1 demonstrates the measurement of these parameters. Following the recommendations of the ASE, the LV mass was calculated using the formula LV mass =0.60+ [(PWTd + LVIDd + IVSTd)3 − LVIDd3] ×1.04×0.80. LV mass index (LVMi) was calculated using the formula LVMi =(LV mass)/[body surface area (BSA)], and RWT was calculated using the formula RWT =2× (PWTd)/(LVIDd) (11,13). We used the Du Bois formula to estimate BSA (14). LV hypertrophy was defined as LVMi >95 g/m2 for women and >115 g/m2 for men, and increased RWT was defined as RWT >0.42 (11,13). According to a previous study by Verma et al., we assigned patients into the following 4 groups with LVMi and RWT: normal geometry (normal LVMi and normal RWT), concentric remodeling (normal LVMi and increased RWT), eccentric hypertrophy (LV hypertrophy and normal RWT), and concentric hypertrophy (LV hypertrophy and increased RWT) (15). 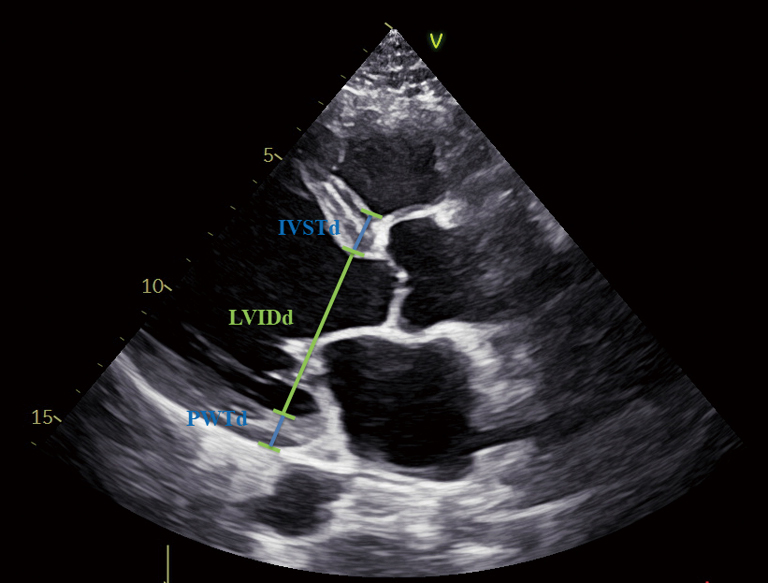 The database was reviewed yearly to identify regular follow-up information. Furthermore, we contacted all participants in this study again by phone using standard forms and procedures.

The propensity scores of all patients were established by using a multivariate logistic regression model. The variables in Table 1, except systolic blood pressure and diastolic blood pressure, are the prespecified covariates. Concentric hypertrophy patients were matched with the normal geometry, concentric remodeling, and eccentric hypertrophy patients by using nearest-neighbor propensity score matching. Categorical variables are summarized as percentages, and continuous variables as median (the 25th percentile, the 75th percentile) or mean (± standard deviation). ANOVA or a Kruskal-Wallis test was used to compare continuous variables of more than 2 groups. A Mann-Whitney U test or Student’s t-test was used to compare continuous variables between 2 groups. Fisher’s exact test or χ2 test was used to compare categorical variables. The Kaplan-Meier method and the log-rank test were used to calculate and compare the cumulative survival rate and freedom from MACCE. The independent predictors of MACCE or death were determined by using a Cox proportional hazard model. Variables associated with MACCE or death in the univariate analysis (P<0.1) are included in the multivariate analysis as confounding variables. The area under the curve (AUC), category-free net reclassification improvement (NRI), and integrated discrimination improvement (IDI) were used to evaluate the predictive value of LV geometry for MACCE and death. AUC was calculated by using receiver operating characteristic (ROC) analysis, and NRI and IDI were obtained by using the R package PredictABEL (Suman Kundu, Yurii S. Aulchenko, and A. Cecile J.W. Janssens, 2014). We performed all analyses using R version 3.4.3 and SPSS version 22.0 (IBM, Chicago, Illinois). P values <0.05 were considered significant. A Bonferroni’s test was used for post-hoc comparisons. 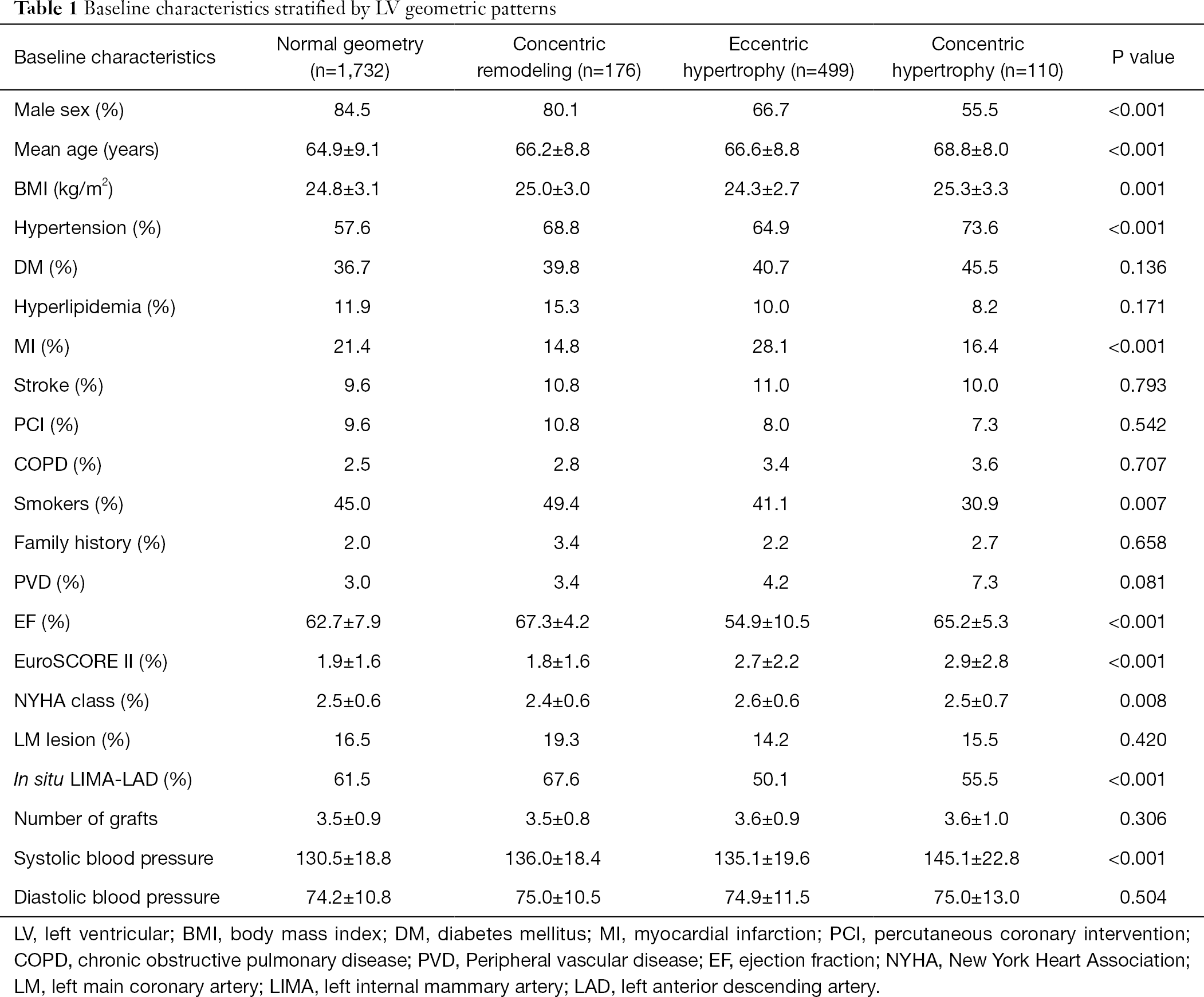 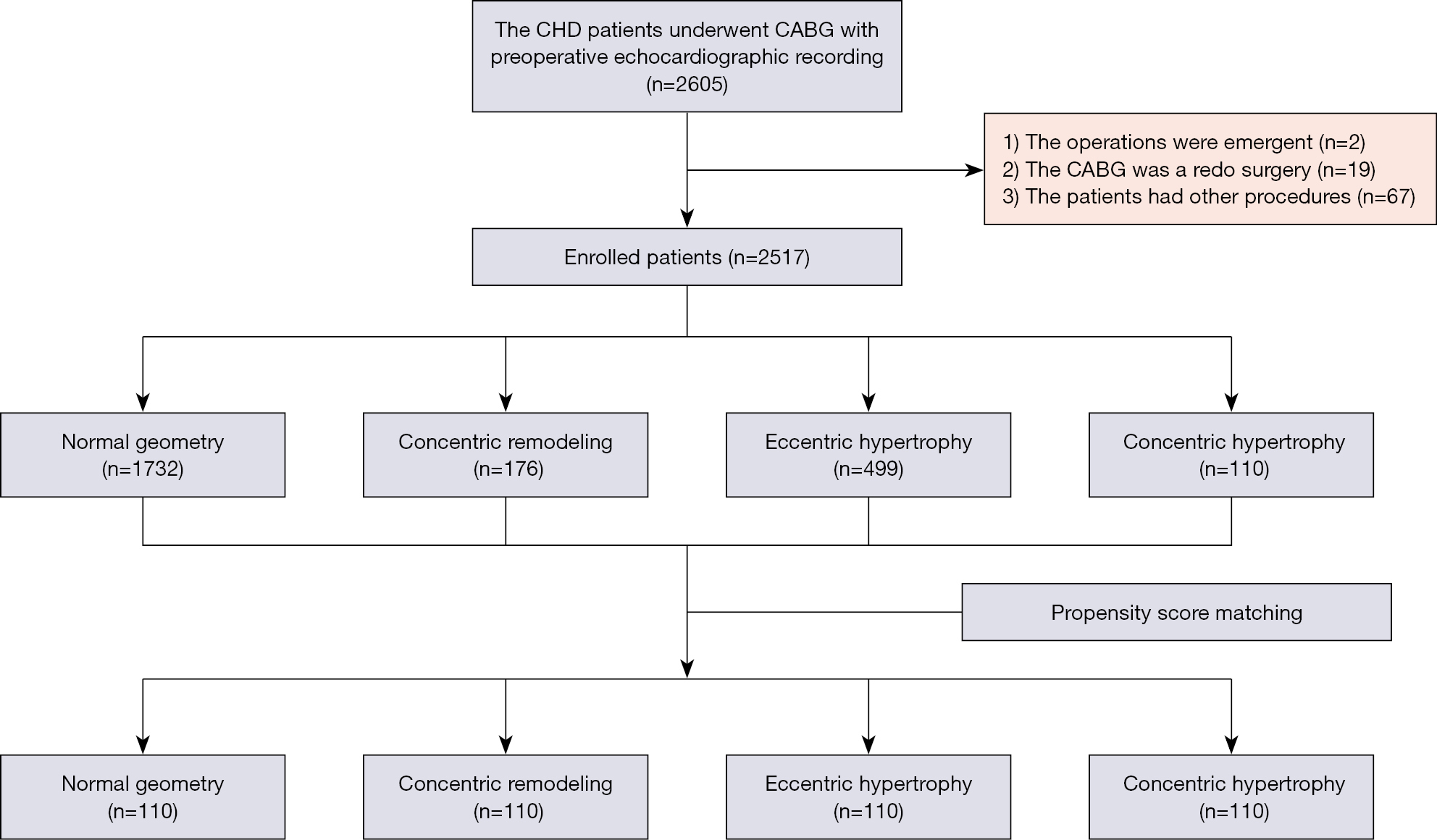 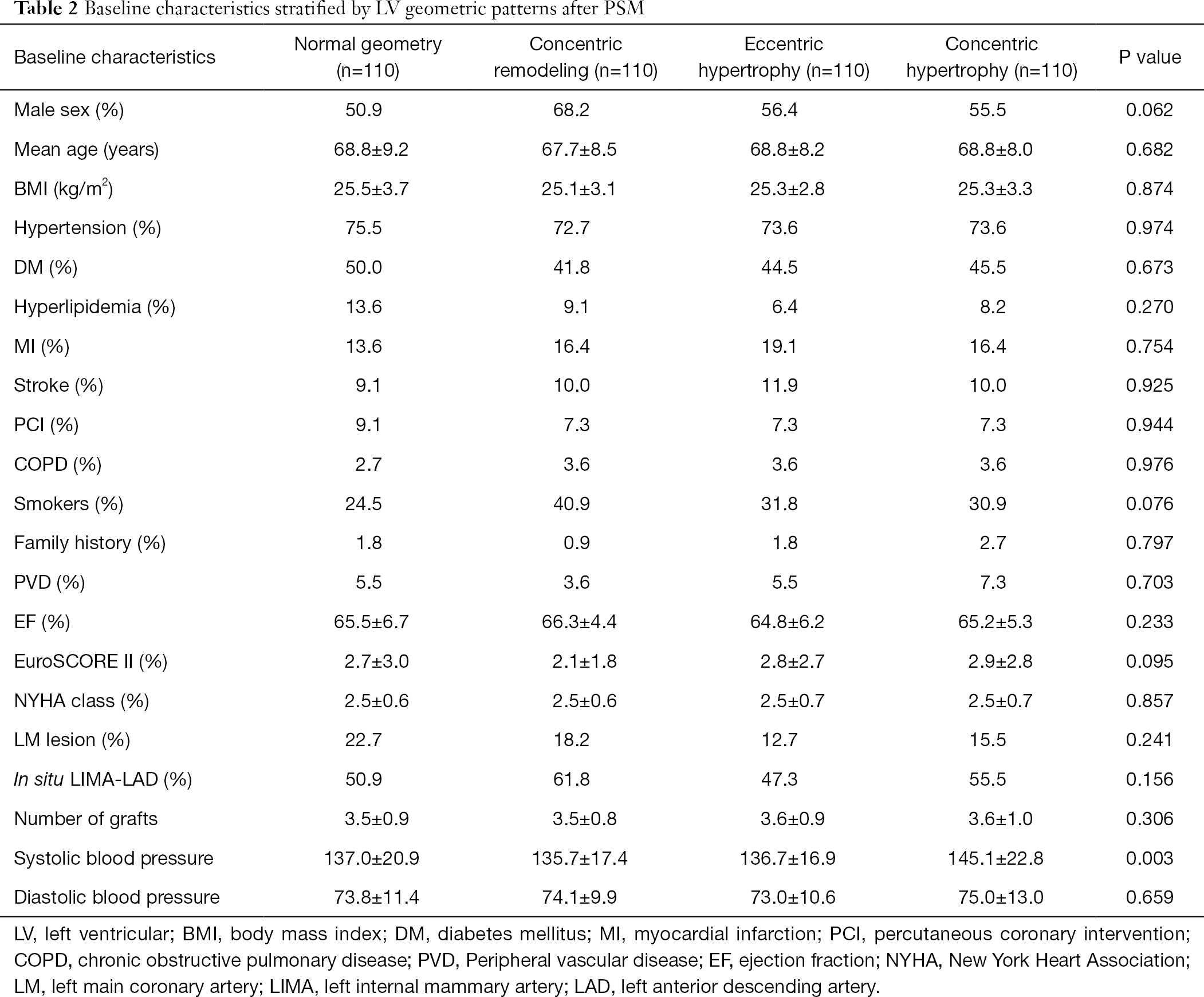 The relationship between LV geometry and outcomes after CABG 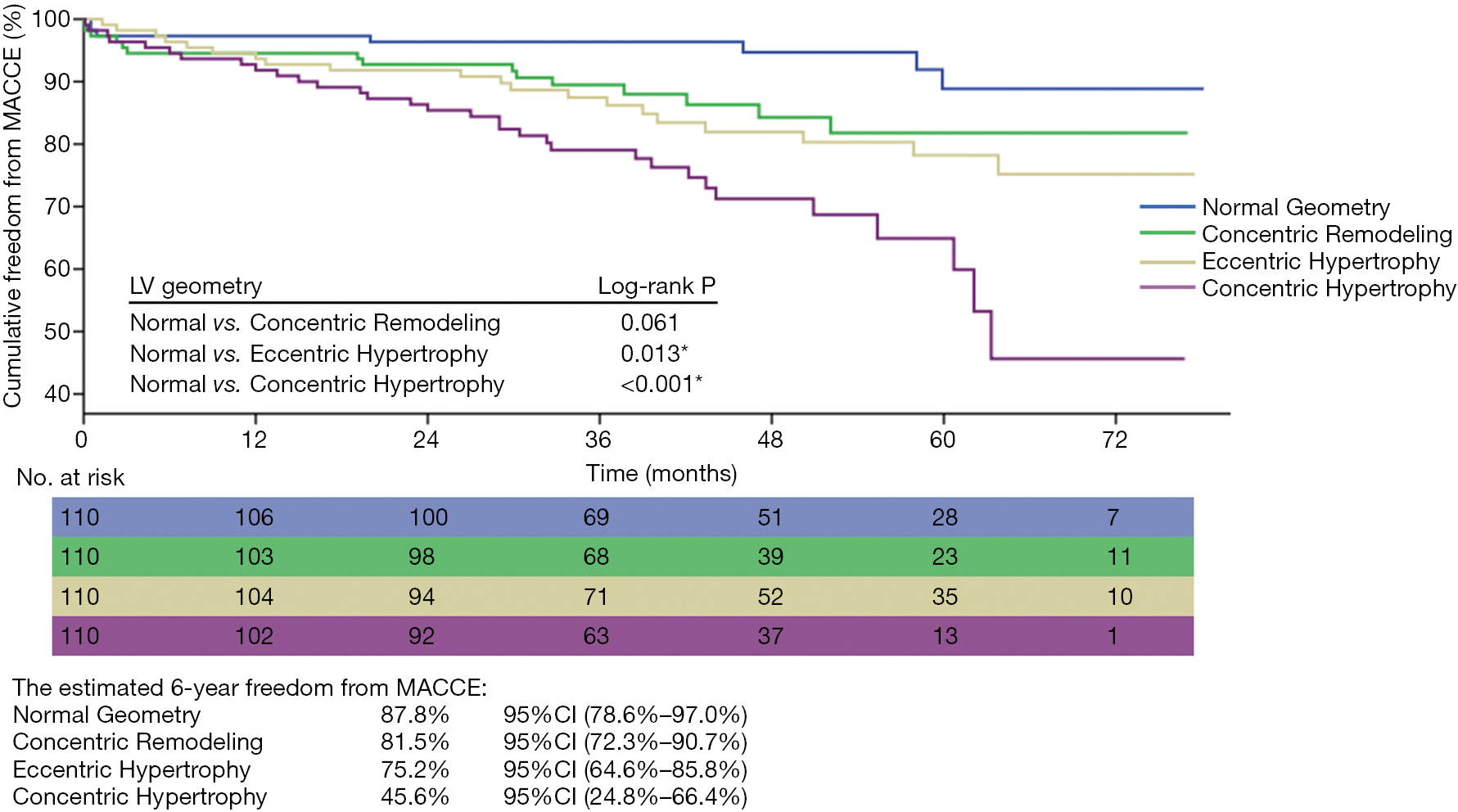 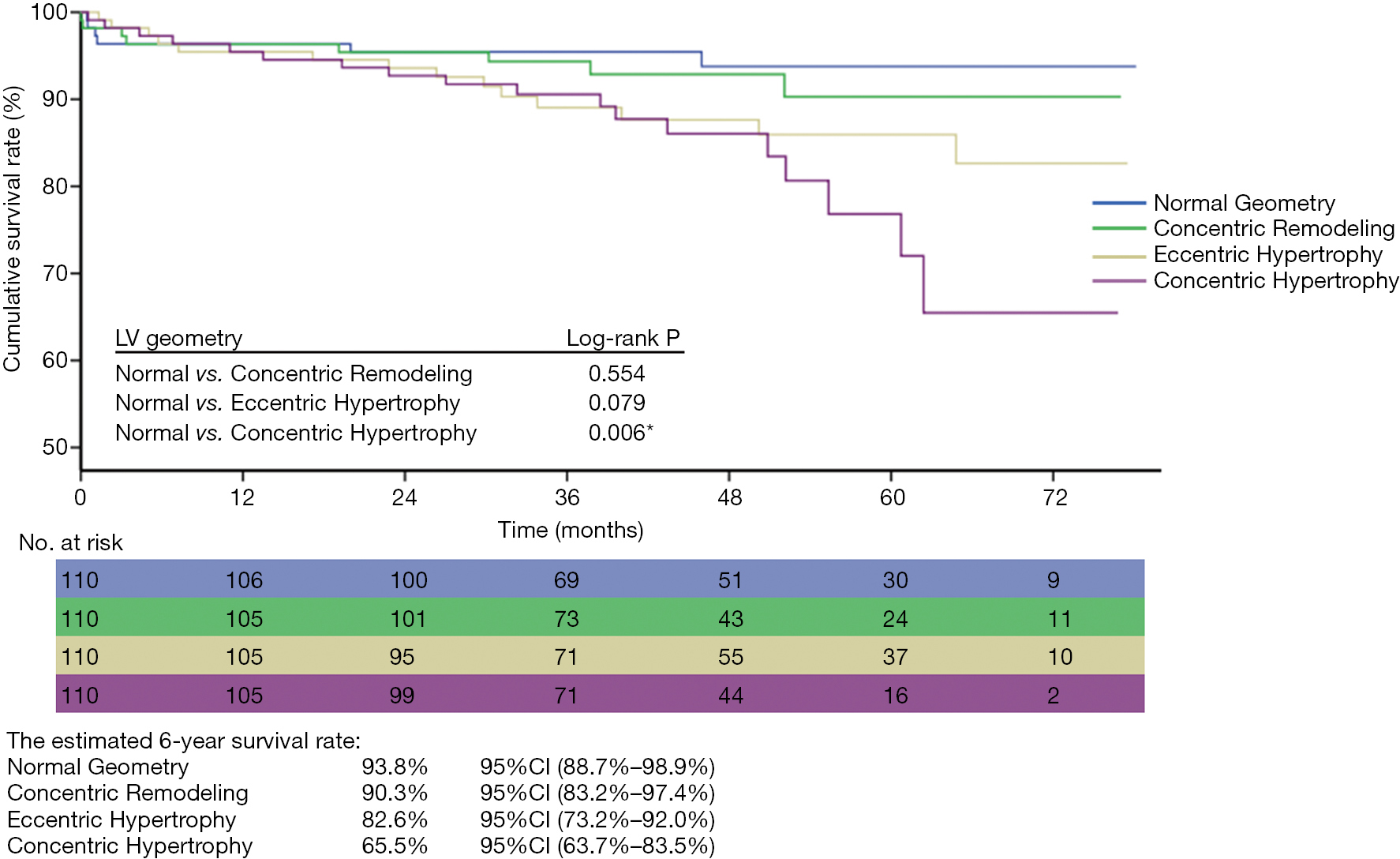 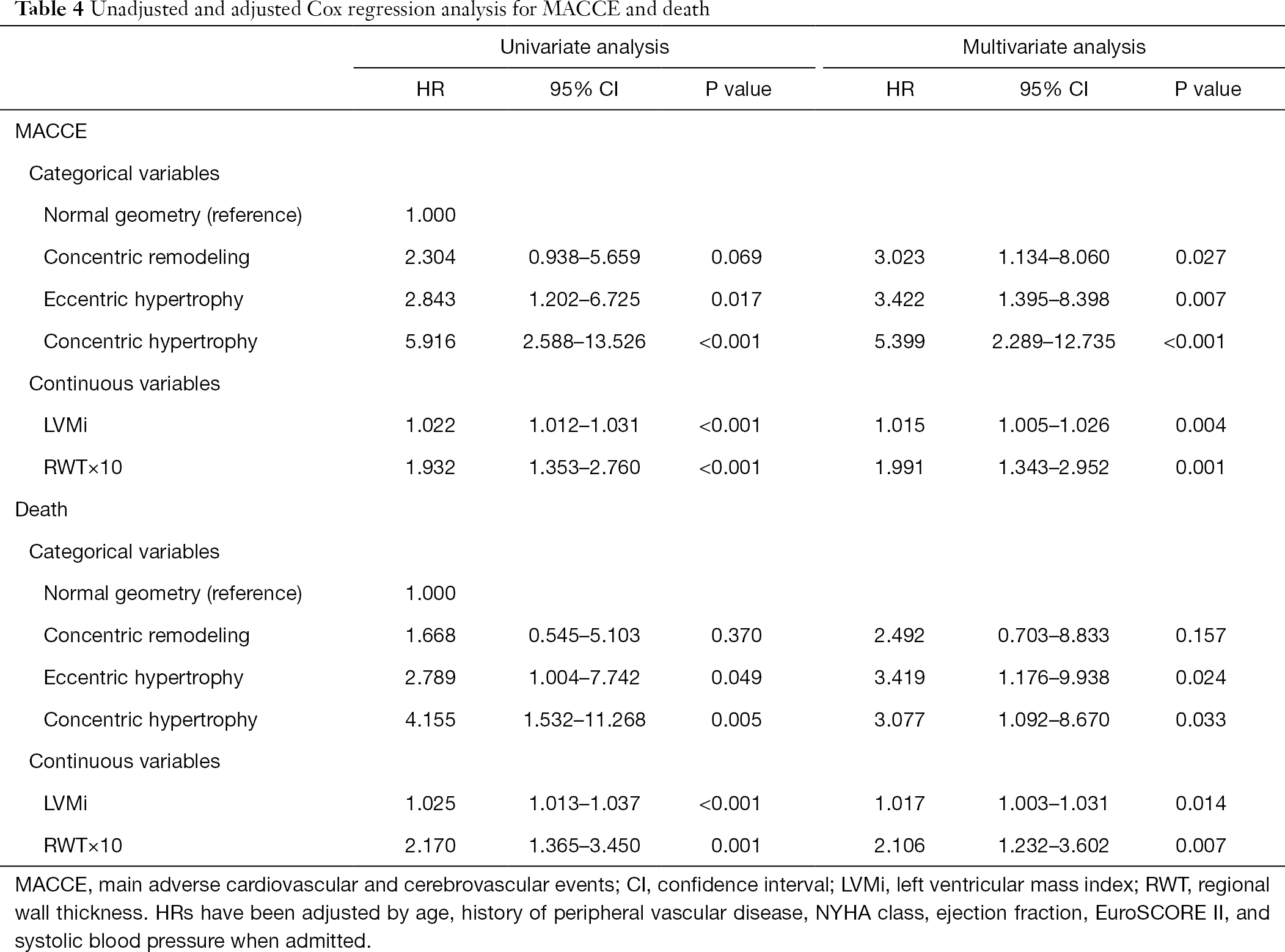 Increased LV mass and abnormal LV geometric patterns, including concentric ventricular remodeling, eccentric hypertrophy, and concentric hypertrophy, result from volume and pressure overload (6,15). They are considered to reflect the chronicity and severity of cardiovascular risk factors and may have better prognostic ability than current predictors (16,17). The prognostic implications of LV mass and geometry have been confirmed in populations with different cardiac diseases, including CHD, left ventricular systolic dysfunction and aortic stenosis (18-20). However, clinical data on the prognostic value of LV geometry in CABG patients is lacking. CABG is an essential treatment for CHD. CABG patients usually have severe CHD, and an increasing proportion of patients referred for CABG have severe complications and LV geometric adaptations. Since LV geometry has predictive value for CHD prognosis, there may be predictive potential for CABG patients.

This study demonstrated a significant association between abnormal LV geometry and cardiovascular risk. According to the multivariate Cox regression analyses, all LV geometric adaptations are independent risk factors for MACCE, and concentric LV hypertrophy has the highest risk of adverse events, therefore confirming the prognostic value of LV geometry in CABG patients. The renin-angiotensin-aldosterone system and hypertension play essential roles in the progression of LV hypertrophy and CHD. Increased LV mass that exceeds the scope of compensation for the increased cardiac load is a pathological process found in concentric LV hypertrophy (21,22). Moreover, there is abnormal collagen deposition around the intramyocardial coronary arteries and the extracellular matrix in patients with pathological increases in LV mass, inducing medial thickening, and stenosis of coronary arteries (23,24). For CABG patients, the extracellular collagen deposition is also associated with the calcification and failure of vein graft (25). LV hypertrophy induces disorganization of the sarcomere, loss of myocytes with fibrotic replacement, changes in glycolytic metabolism, alterations in calcium handling, adaptations in contractility, diastolic and systolic dysfunction, and electrical remodeling (26). These changes in structure, metabolism, and function may facilitate the association between LV hypertrophy and graft lesions, heart failure, or adverse cardiovascular events.

The rapidly growing use of PCI for myocardial revascularization and the aging of the population has led to many patients with severe complications, and abnormal LV geometry refers to CABG, which increases the risk of adverse events. Hence, better risk stratification and tailored treatment strategies are needed. There have been some evaluation systems used to predict the risk of perioperative and long-term adverse events in patients undergoing cardiac surgery, including EuroSCORE and EuroSCORE II (27-31). None of these evaluation systems incorporate information about LV geometry, despite being significantly associated with adverse events after CABG, as observed in this study. We demonstrated that LV mass or geometry provided an incremental prognostic value EuroSCORE II to predict mid-term MACCE or death in patients after CABG. Given that echocardiography is one of the routine tests before CABG, echocardiographic based LV geometry assessment can, therefore, be a practical and useful clinical tool for improving risk prediction and risk management in CABG patients.

This initial analysis of LV mass and geometry focused on individuals undergoing CABG. There is an additional need for accurate cardiovascular risk prediction for other cardiac interventions. Furthermore, this study is non-randomized, and another potential limitation of this study is that there might still be residual confounders. Moreover, patients without echocardiographic measurements at admission were not included in this study, which might have introduced selection bias.

LV geometry was an independent and incremental prognostic factor for MACCE and death in CABG patients.

We thank Dr. Yuehua Fang for the valuable discussion.

Funding: This paper was supported by the Cultivation Program from Ruijin Hospital for Youth Program of National Natural Science Foundation (2019QNPY02021).

Conflicts of Interest: All authors have completed the ICMJE uniform disclosure form (available at http://dx.doi.org/10.21037/qims-19-926). The authors have no conflicts of interest to declare.

Ethical Statement: The institutional ethics board approved the study of Rui Jin Hospital (NO. 2018-15), and informed consent was taken from all the patients.