Ultrasound assessment in psoriatic arthritis (PsA) and psoriasis vulgaris (non-PsA): which sites are most commonly involved and what features are more important in PsA?

Psoriatic arthritis (PsA) is a chronic inflammatory joint disease associated with psoriasis, which is deforming and destructive in 40–60% of patients and entails consequent functional impairment, decreased quality of life, psychosocial disability, and an increased risk of death (1,2). It is a heterogeneous disease with different domains and particular sites involved. Its heterogeneity is such that the term “psoriatic disease” has been suggested to encompass involvement at many different tissue levels, including joints, entheses, tendon, bursae, skin, and nails (3,4).

Not only has it been demonstrated that ultrasound (US) is more sensitive than radiography, but it is also more sensitive than clinical examination for the assessment of inflammatory and structural changes in inflammatory arthritis, including PsA, and particularly synovitis, enthesitis, tenosynovitis, and bursitis (5-7). US results are comparable to those of magnetic resonance imaging (MRI), except for bone marrow edema detection. The reproducibility and low cost of the US provide advantages over MRI for PsA detection (8-10). The current European League Against Rheumatism (EULAR) recommendations favor the use of US in rheumatoid arthritis (RA). In routine practice and clinical trials of PsA, disease activity is still monitored by RA-specific clinical composite scores. These measures, however, are of questionable value for PsA because of the heterogeneous nature of the disease characterized by various joint, enthesis, tendon, and bursa features (11-13). Therefore, a dedicated US examination is needed to monitor disease activity and progression of PsA.

However, a complete US examination of all joints, entheses, tendons, and bursae that can be affected in PsA would be extremely time consuming and infeasible. Also, there is no current agreement on the optimal number or the specific sites which should be assessed for a sensitive and feasible US assessment (14). Furthermore, which ultrasonic features are most important are still unknown. The aim of this study was to find out the most common involvement sites of joints, entheses, tendons, and bursae by ultrasonography and discover the most important ultrasonic features in PsA, which are of great value in daily US practice. 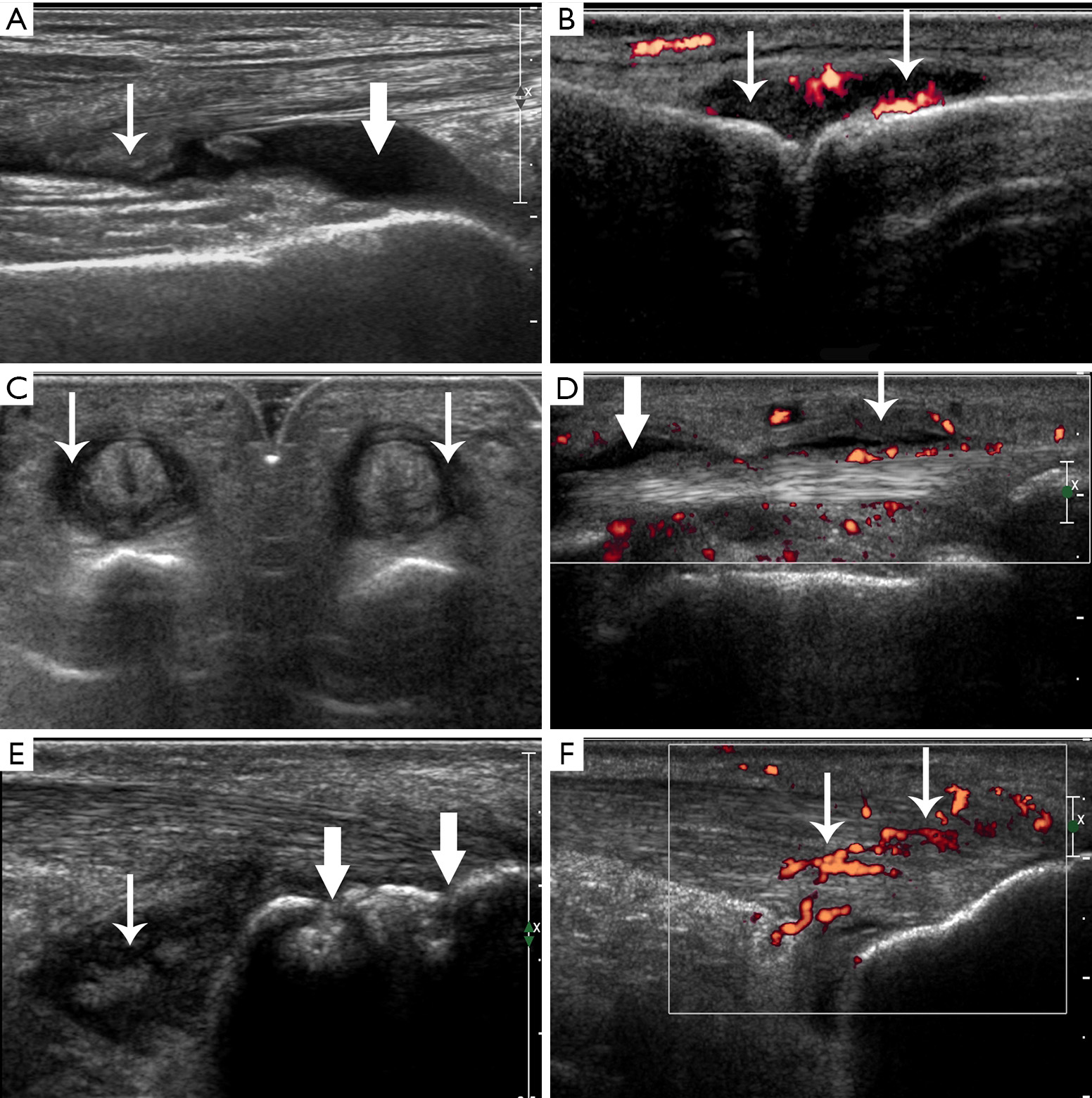 US scan was performed by 2 adept radiologists with 7 and 10 years’ experience in musculoskeletal US imaging. The scanning time was about 30 to 60 min per individual. The imaging experts were blinded to patient data; all patients underwent the US in random order and were instructed not to communicate with the sonographer about their disease during the US assessment. Before the study, the investigators reached a consensus on the US scanning technique and method of data interpretation to adopt. A diagnostic consistency test was conducted, and a κ value of 0.85 was obtained. Briefly, the above-mentioned joints, entheses, tendons, and bursae of the 10 PsA patients were evaluated by the two radiologists. Grayscale and PD changes of these joints, entheses, tendons, and bursae were observed.

Our current study included 120 PsA patients and 320 non-PsA patients. The main characteristics of the study patients are shown in Table 1. Age, sex distribution, body mass index (BMI), and duration of psoriasis in PsA and non-PsA patients showed no significant difference (all P>0.05). 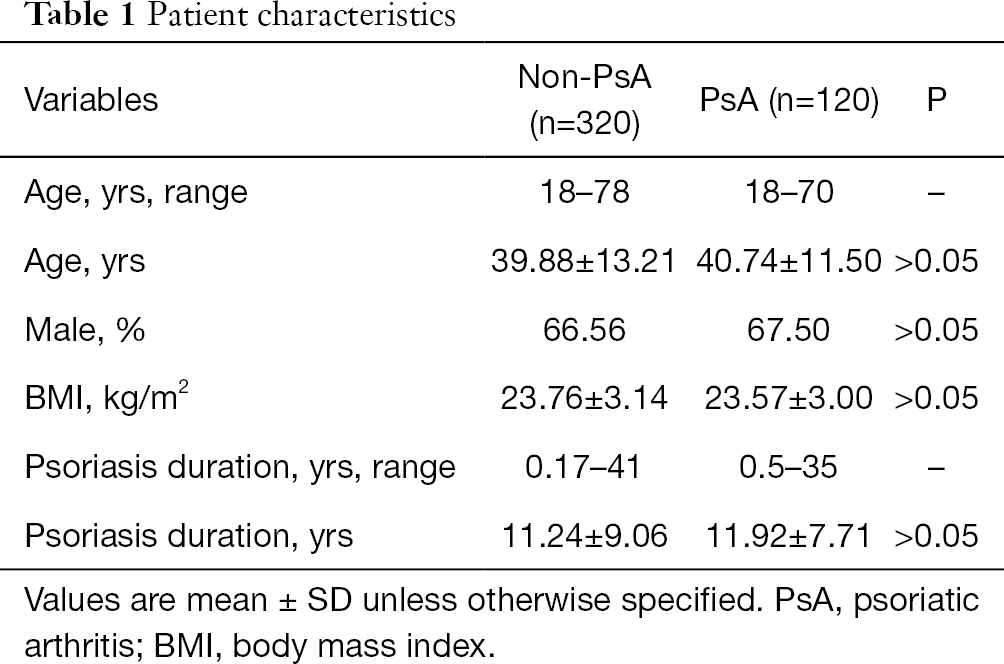 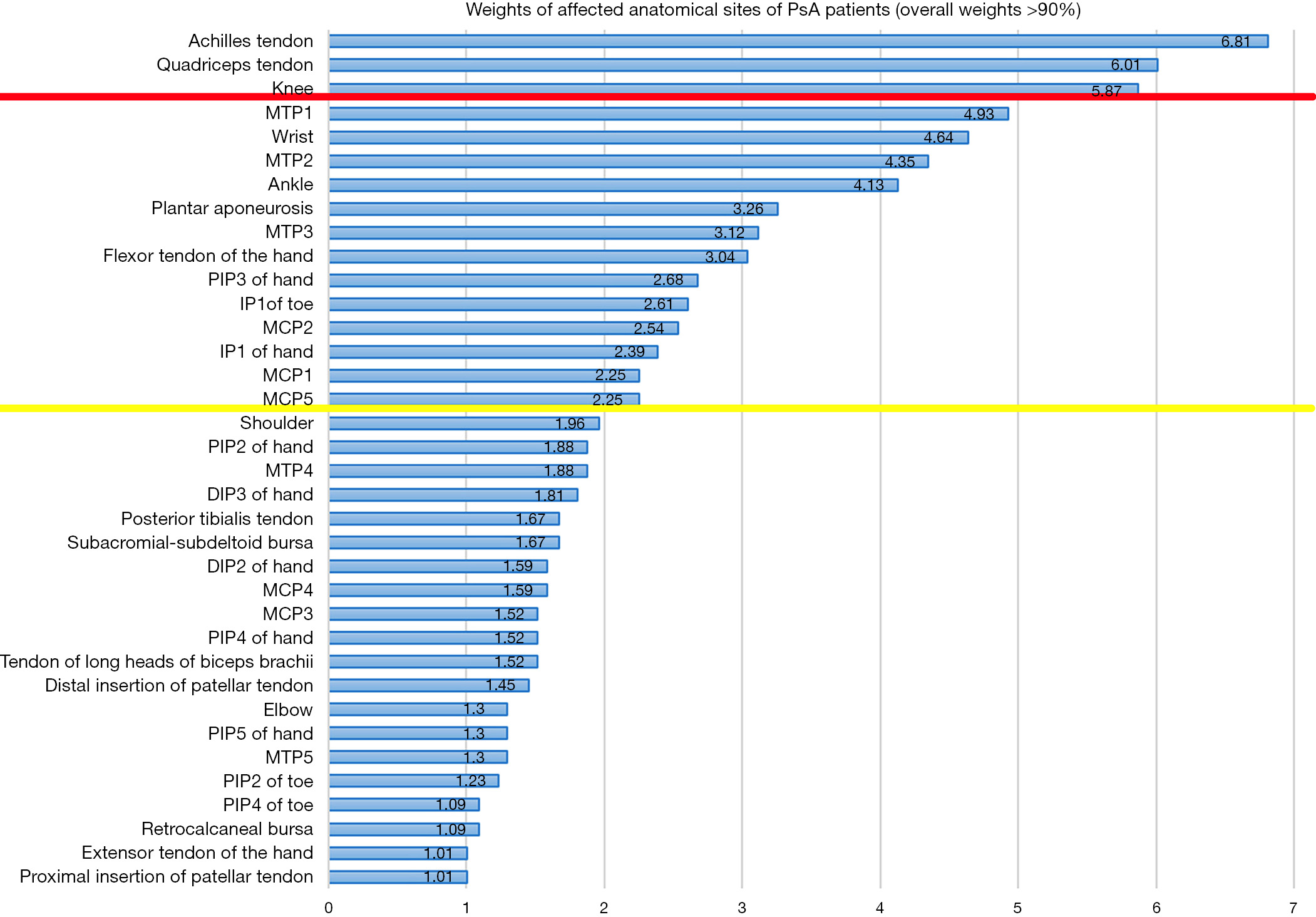 Comparison of affected anatomical sites between PsA and non-PsA patients

Comparison of ultrasonic features between PsA and non-PsA patients

The results are summarized in Table 3.

Test performance of ultrasonic features for the diagnosis of PsA

The most commonly involved sites

Meanwhile, ultrasonic features of joint osteophytes, tendon thickening, tendon hypoechogenicity, tendons PD signals, enthesis thickening, enthesis hypoechogenicity, enthesis calcifications, and all bursa lesions showed no significant differences between PsA and non-PsA patients. As indicated by our study, these features were relatively unimportant compared with the above-mentioned features of PsA. However, one recent study published by the Outcome Measures in Rheumatology (OMERACT) imaging group showed that the final agreed definition of a US-detected enthesitis in patients with PsA was the following: hypoechoic and/ or thickened insertion of the tendon close to the bone which exhibits Doppler signal if active and which may show erosions and enthesophytes/calcifications as a sign of structural damage (23). However, this study did not compare PsA patients with non-PsA patients. Thus, further studies by US are needed in clinical trials and practice.

Our study has some limitations. First, other abnormalities of PsA, such as dactylitis and nail changes, were not assessed despite the good sensitivity of the US. Second, our study did not compare the findings of PsA with other arthritis, such as rheumatic arthritis or osteoarthritis. These limitations should be addressed in future studies.

The most common involvement sites of PsA were the Achilles tendon, quadriceps tendon, and knee, and some sites in the non-PsA patients were also highly involved. The most important features in PsA included joint PD signal grades, joint bone erosions, enthesis bone erosions, and enthesis PD signals in US assessment.

Funding: This study was supported by the National Natural Science Foundation of China (81671696) and Science and Technology Support Program of Sichuan Province, China (2019YFS0444).

Ethical Statement: The study was approved by the West China Hospital of Sichuan University Ethics Committee. Informed consent was obtained from all volunteers.