Non-invasive imaging techniques for quantifying blood flow, down to the capillary level without the use of contrast agents, are of great value for several biomedical research applications, as well as for the clinical diagnosis and treatment of several diseases that have vascular involvement. Current imaging methods have several limitations such as invasiveness (e.g., radioactive methods), inability to provide three-dimensional (3D) information (e.g., laser speckle contrast imaging), poor spatial and temporal resolution (e.g., MRI), or limited imaging depth (e.g., confocal microscopy, which images up to a depth of <300 µm). Therefore, there is a need for a label-free method capable of non-invasively measuring the 3D blood perfusion in tissues in vivo, with high resolution (e.g., <10 µm).

Optical coherence tomography (OCT) (1,2) is an imaging technique which has enabled the visualization of several 3D biological tissue structures with micrometer resolution, and up to a depth of a few millimeters. Previous efforts have enabled OCT to isolate the blood vessels from the tissue microstructures, such as phase resolved optical Doppler tomography (PRODT) (3). The method relies on evaluating the phase difference between adjacent A-scan OCT signals within one B-scan, which is directly related to the blood flow velocity. Although PRODT has been widely used, its sensitivity to blood flow is low, making it difficult to visualize capillary vessels which have a flow velocity of 0.1-0.9 mm/s (4) and even lower in a diseased state. To improve the sensitivity, efforts have been made into other alternatives such as phase variance between adjacent B-scans (5). Given that the time interval between the adjacent B-scans is relatively long (microseconds), the method is sensitive to slow flows within the capillary vessels. However, this method has a long acquisition time (~25 min), and is more sensitive to motion artifacts. Other methods have also been proposed, such as resonant Doppler flow imaging (6), joint spectral and time domain imaging (7-9), speckle variance imaging (10), phase variance contrast imaging (11), and single-pass flow imaging (12,13).

Optical microangiography (OMAG) (14) is an imaging method capable of resolving three-dimensional distribution of dynamic blood perfusion at the capillary level within microcirculatory beds in vivo. This is achieved by the efficient separation of the moving scattering elements from the static scattering ones within tissue. The initial effort of OMAG development started with the full range complex Fourier domain OCT (15,16), and later, various forms of implementations were proposed to efficiently extract the blood flow signals from the overwhelming scattering background with improved system sensitivity to the blood flow. Its imaging contrast comes from the light backscattering from endogenous moving particles (e.g., flowing blood cells within patent vessels), thus, no exogenous contrast agents are used. OMAG has been applied to analyze the phase difference for both adjacent A-scans and B-scans. In this highlight we describe the OMAG system and demonstrate a few applications for studies of in vivo biological tissues.

OMAG is an extension of Fourier domain OCT (FDOCT), which can simultaneously obtain the microstructural and microvascular images of the scanned tissue sample in 3D. The schematic diagram of the spectral domain OCT system (one of the forms of the FDOCT) used for OMAG is presented in Figure 1A. The description of the system has previously been detailed (17). Briefly, a light source, such as a superluminescent diode or a supercontinuum light source is used. The sample light is coupled into a fiber optic probe, consisting of a pair of X-Y galvanometer scanners, and the optics that deliver the probing light to and from the sample of interest. The lateral resolution is determined by the objective lens while the axial resolution is given by the light source central wavelength and is inversely proportional to its bandwidth. The resolutions are typically ~10 µm each. The light returning from the reference and sample arm is recombined and sent to a spectrometer, which is usually controlled by a computer where the data is stored and processed.

At each position, an A-line (in depth) is acquired. The combination of several A-lines at different lateral positions is known as a B-scan and several B-scans at different positions produce a C-scan or three-dimensional data set, as shown in Figure 1B.

The principle of OMAG is based on analyzing the spectral interference signal collected by the spectrometer, which is given by:

where k is the wavenumber; t is the timing when an A-line is captured, ER is the light reflected from the reference mirror, S(k) is the spectral density of the light source used; n is the refractive index of the tissue; z is the depth coordinate; a(z,t) is the amplitude of the back scattered light; v is the velocity of moving blood cells in a blood vessel, which is located at a depth z1. Given that the light backscattered from the sample is weak compared to the light reflected from the reference mirror, we do not consider the self cross-correlation between the light scattered from different positions within the sample. The dc signal does not contribute to useful OMAG signal; therefore, it is not considered as well. A high-pass filter is applied based on a differential operation:

where i represent the index of the A-line. The filter can be applied in the B or C direction, for fast or slow flow velocities, respectively. Alternatively, one can also apply Eq.[2] in time domain signals (e.g., OCT signals). Doppler OMAG has also been demonstrated to quantify blood flow velocities in the functional blood vessels within the microcirculation tissue beds in vivo. The method takes advantage of both OMAG and phase resolved method, and introduces a digitally reconstructed tissue background that is optically homogeneous (17). The flow velocity depends on the time interval between two A-line (Δtb), given by:

where λ is the wavelength of the light, Δϕ is the phase difference between two A-lines, and n is the index of refraction of the sample. OMAG has demonstrated flow sensitivities of 160 µm/s in the fast scan direction (B scan) (17), and 4 µm/s in the slow scan (C-scan) or M-mode scan (repeated scan) direction (18).

The ability to quantify the three-dimensional vessel morphology in individual capillaries within human and animal tissues in vivo, has proven invaluable in understanding the mechanisms of several diseases. OMAG has been previously used to monitor the microangiography of biological tissues in vivo including a mouse ear (19), the retina in humans (20) and rats (21), the corneo-scleral limbus in humans (22), the cerebrovascular perfusion in mice with an intact skull (23), the cochlea of gerbil (24) and mouse (25), the renal microcirculation in mice (26), the vessels in normal and psoriatic human skin (27), and the gastrocnemius muscle in mice (28). The repeatability of the OMAG technique has previously been studied, and methods for quantifying the images based on vessel length fraction, vessel area density and fractal dimension have been developed (29).

Figure 2A presents a cross-section slice (B-scan) of a microstructural image from the retina of a human subject across the fovea. In the image, different layers can be observed (e.g., choroids, retinal pigment epithelium and nerve fiber layer). After applying the OMAG algorithm to the data, it is possible to extract the location of the blood vessels (Figure 2B). By combining several cross-section images in the C-direction, a three-dimensional volume is yielded, and a projection view image of the vessels can be extracted. Several projection view images, of approximately ~2 mm × 2 mm, were stitched together to show a larger view of the retina, as shown in Figure 2C. The vessels can also be segmented based on their location within the different layers observed in the structural image.

Figure 2 Images from the retina of a human subject. A. OCT structural image of the cross-section of the fovea where the different layers can be observed; B. OMAG image cross-section of the fovea where the blood vessels can be observed at each layer; C. Projection view image of the vessels located in the retina. Several ~2 mm × 2 mm images were stitched together. Scale bar: 500 µm

Figure 3 presents another example of a projection view image of the blood vessels located in the back of the finger from a human subject. It can be observed how the vessel structure (e.g., length, diameter, density and tortuosity) differs significantly from the vessels in the human retina. The tip of the vessels present a loop structure which is typical for normal skin (30). The study of these vessels may have applications in diagnosing and understanding connective tissue diseases, Raynaud’s disease and diabetes.

Figure 3 A. Picture showing the location on the finger where the OMAG image was obtained; B. Projection view image of the vessels located in the back of the finger of a human subject. The loops at the tip of the capillaries can be observed. Scale bar: 500 µm

Figure 4 shows an example of a projection view image of the vessels located in a mouse ear, using the OMAG technique. The mouse ear has been previously used as a model for studying the changes in blood flow due to a burn injury (19) as well as tumor (31). 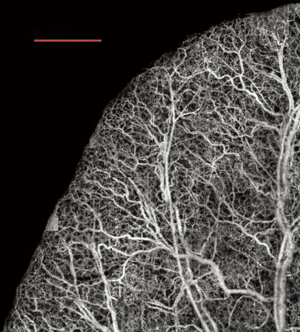 The last example is presented in Figure 5 where we show a projection view image of the vessels located in the mouse brain with an intact skull. This method has been previously demonstrated (23). Mouse brain has served as a good model for studies of stroke though mid-cerebral artery occlusion, traumatic brain injury, and for studying the influence of drugs in cerebral blood flow. 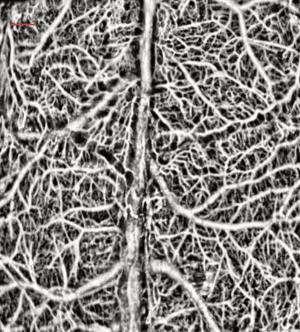 Figure 5 Projection view image of the vessels located in the mouse brain with an intact skull. Scale bar: 500 µm

OMAG is a useful imaging tool which provides a non-invasive label-free method for obtaining three-dimensional angiography of tissue vasculature with capillary resolution. The technique takes advantage of the optical scattering signal properties of the Fourier domain OCT interferograms, which enable the separation of the blood perfused vessels. Although this work highlights the benefit of the method as a label-free technique, contrast agents (e.g., nanoparticles and microbubbles) may offer a potential to increase the light backscattered from the moving elements. OMAG can obtain images up to a depth of a few millimeters with high spatial and temporal resolution. There has been a wide range of applications of the OMAG technique for imaging in vivo biological tissues, such as the brain, ear, retina, cochlea and skin. Studies of tissue angiography will be beneficial for understanding several pathologies (e.g., angiogenesis, age related macular degeneration) and the development of therapies (e.g., drugs for wound healing).

We would like to thank Mr. Lin An, Dr. Suzan Dziennis, Dr. Peng Li, Mrs. Jia Qin, Dr. Lei Shi, Mr. Siavash Yousefi and Mr. Zhongwei Zhi for providing the images that are used in this highlight. This work was supported in part by research grants from the National Institutes of Health (R01HL093140, R01HL093140S, R01EB009682 and R01DC01201) and the American Heart Association (0855733G). The content is solely the responsibility of the authors and does not necessarily represent the official views of grant-giving bodies.

Disclosure: The authors declare no conflict of interes.