Hydroxychloroquine (HCQ) is toxic to the retina in proportion to daily dose and duration of use, causing a characteristic Bull’s eye retinopathy with loss of photoreceptors and retinal pigment epithelium (RPE) changes in the macula (1-3).

In 2011, the American Association of Ophthalmology (AAO) recommended new screening guidelines, which included multifocal electroretinography (mfERG), spectral domain optical coherence tomography (SD-OCT), fundus autofluorescence (FAF) and Swedish Interactive Threshold Algorithm (SITA) 10–2 automated field. Although the mechanism of this HCQ toxicity is unclear, as animal experiments have shown the drug can affect all retinal layers (4), the damage observed in clinical imaging is primarily to the outer retina (5).

The OCT angiography system operated at a central wavelength of 840 nm and with an A-scan speed of 67,000 scans per second. Three scanning protocols were performed, which included a 512×128 macular raster scan for conventional 3D OCT image, a single high density B-scan with 1,024 A-scans to provide high definition OCT cross sectional image, and a montaging OMAG scan to acquire 6.5 mm × 6.5 mm 2 field of view microvascular image. The montage scan was achieved by using a motion tracking line scanning ophthalmoscope (LSO) built-in system and was composed of 3×3 single cube scans. Each cube had a field of view of 2.4 mm × 2.4 mm at the surface of retina. Transverse scanning was obtained with a total of 245 A-lines to form a single B scan. Four repeated B-scans were performed at each fixed location. Over a distance of 2.4 mm, 245 B scans were sampled with each scan measuring 9.8 microns apart. The acquisition rates were ~222 frames per second (fps). The OMAG algorithm (8,11) was applied to the volumetric dataset to obtain microstructural and microvascular images within the retina and choroid. The average OCT B-scans were examined in the regular OCT data to show cross-sections as well as en-face projections of the retinal tissue.

The retina and choroid were accurately segmented into different distinct physiologic layers using a semi-automatic segmentation software (12). Two layers were segmented in the retina: an inner layer from ganglion cell layer (GCL) to inner plexiform layer (IPL) which excluded the retinal nerve fiber layer (RNFL); and a deep layer from outer plexiform layer (OPL) to external limiting membrane (ELM). The choroidal segment contained both the choriocapillaris and choroidal layers. The segmentation was performed using the OCT cross sectional structural images based on the intensity differences of the retinal layers. The three dimensional structure of the retina and microvasculature were rendered and projected using a 3D visualization program coded with Matlab®.

The 66-year-old Caucasian female with history of rheumatoid arthritis taking 400 mg/day of HCQ for 13 years with no prior eye examination or HCQ screening was referred for decreased vision in both eyes. Her best corrected visual acuity (BCVA) was 20/30 in both eyes. On examination, her weight was 55 kg and height was 157 cm. She denied any significant weight changes in the last 13 years (>10 lbs). Her most recent comprehensive metabolic panel (CMP) illustrated mild to moderate loss of kidney function with a glomerular filtration rate (GFR) of 50. Her liver function was normal. She denied dosing changes of HCQ from the initiation of the drug. 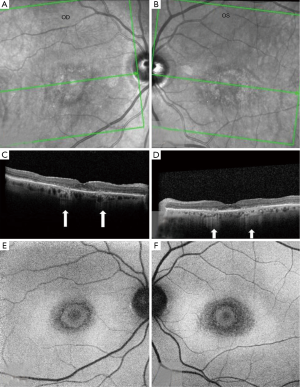 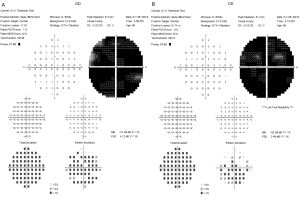 The OMAG enface images (Figures 3,4) demonstrated the loss of parafoveal deep microvasculature and choriocapillaris, the features of which are well comparable with the findings by SD-OCT, auto-fluorescence and HVF. The normal vascular ring around the foveal avascular zone (FAZ) was present in both eyes; however the capillary vascular density was dramatically reduced radially in the parafoveal area. The choroidal layers displayed increased intensity of microvasculature due to a window defect. This can be attributed to the atrophy of the RPE and outer retina in the parafoveal area consistent with this disease process (13). 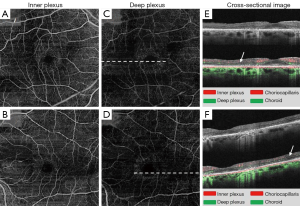 Figure 3 OMAG retinal angiograms of the macular region of approximately 6.5 mm × 6.5 mm field of view: right eye (top row) and left eye (bottom row). Shown are the enface OMAGs for the inner (A,B) and deep plexus (C,D) within retina. (E,F) OCT-B scan structural image (top) together with overlaid flow signals (bottom) at the positions marks by dashed line in (B,E) are provided to appreciate the deterioration of retinal vasculature due to HCQ toxicity. The results show relatively normal vascular ring around the FAZ, however the capillary vascular density is almost absent in the parafovea and the outer retinal layers (arrows). OMAG, optical coherence tomography based microangiography; HCQ, hydroxychloroquine. 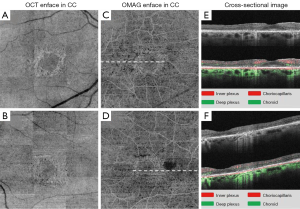 Figure 4 OMAG choroidal angiograms of the same macular region as in Figure 3: right eye (top row) and left eye (bottom row). OCT enface images (A,B) obtained from the CC slab (8 micron-slab beneath Bruch’s membrane) demonstrate a ring shaped hyper-reflection OCT signals centered at the fovea. The corresponding OMAG images (C,D) of the choriocapillaris show loss of capillary vessels in the CC. (E,F) OCT-B scan structural image (top) together with overlaid flow signals (bottom) at the positions marks by dashed line in (C,D) are provided to appreciate the deterioration of choroidal vasculature due to HCQ toxicity. The OMAG displayed increased intensity of microvasculature of the choroidal layers from the choroidal vasculature exposure due to a window defect. OMAG, optical coherence tomography based microangiography; OCT, optical coherence tomography; HCQ, hydroxychloroquine.

In this study, we utilized the OMAG imaging modality to investigate the retinal and choroidal microvascular architecture in a patient with HCQ toxicity. The resulting retinal images correlated well with the results obtained from SD-OCT, HVF and FAF. The OMAG has provided detailed information of parafoveal microvasculature mapping in our patient with HCQ toxicity. The deep parafoveal microvasculature displayed areas of capillary drop out when compared with the normal subjects. The appearance of outer retina in standard SD-OCT images and the RPE changes seen with FAF were consistent with the microvascular loss as observed in the OMAG images. OMAG is able to provide detailed information about the microvasculature in different layers of the retina and choroid. This imaging technique is noninvasive and objectively provides detailed images with a short capture time and enables the analysis of its correlation with the central visual deficiencies seen on HVF 10–2. OMAG may be useful as a novel screening method and early diagnostic tool for HCQ toxicity.

OMAG’s ability to visualize microvasculature within retinal layers in HCQ may help facilitate the early assessment and diagnosis of disease and possibly provide better understanding of disease progression and efficacy for potential future treatment. OMAG is a newer form of non-invasive imaging technology that promises the investigation of certain retinal and optical nerve pathologies. It is as safe as current SD-OCT and does not require exogenous dye injection. This study illustrates the ability of OMAG to evaluate the retinal and choroidal microvasculature consistent with findings of current standards.