As the most common type of drug-resistant epilepsy in clinics, temporal lobe epilepsy (TLE) is primarily accompanied by temporal cortex lesions (1,2). Generally, the drug-refractory epilepsy can be effectively treated by surgical resection of epileptogenic focus (3). However, distinguishing temporal lobe epileptic seizures (TLES) from organic non-epileptic seizures (ONES) during diagnosing epilepsy (4) remains as a challenging task. ONES is regarded as paroxysmal events that will be mistaken for epilepsy, but is actually not triggered by the epileptic disorder. Instead, it describes a symptom for a diverse group of disorders, including a wide range of conditions, e.g., hypertension, cerebrovascular disease of acute onset, migraine, transient ischemic attack, syncope, dizziness vertigo (4-6).

When patients behave abnormally, their performances are easily reminiscent of epilepsy. Therefore, seeking a scientifically accurate diagnosis and treatment is urgently called for. During TLES, the patients have impairment of consciousness, sudden limb tic, etc. The seizures last 30 seconds to a couple of minutes. And these conditions also exist in patients with ONES (4). At the same time, the correct diagnosis and classification of epileptic seizures depend highly on the extent and quality of evidence acquired at the time of initial diagnosis and additional evidence accumulated over time. At present, the diagnosis methods of epilepsy include magnetic resonance imaging (MRI) and video electroencephalography (V-EEG) (7). The brain MRI might reveal a structural cause for epilepsy, such as mesial temporal sclerosis, but 20% to 30% of patients with TLES demonstrate no MRI abnormalities (8). V-EEG monitoring may be time-consuming and have limited spatial sampling (9). The average duration of this process is three days (standard deviation ±1, ranging from 1 to 9 days) to obtain an accurate diagnosis (10), and interictal epileptiform discharges alone cannot reliably distinguish epileptic seizures from non-epileptic events in all cases (11).

Planned magnetic resonance spectroscopy (MRS) study of patients with frequent or continuous partial seizures may offer a unique opportunity to discover the brain metabolic pattern during ictal events. Figure 1 shows that MRS, which can reveal the metabolic abnormalities in brain tissues of patients who have normal MRI (12) (Figure 1A,B), is a potent tool to locate the seizure focus of epileptic patients by a quantitative analysis of the proton metabolite concentration in the brain (13). A previous study showed that the main contribution of MRS for diagnosis of epilepsy came from N-acetyl-aspartate (NAA) (1), Creatine phosphate (Cr) (13), and Choline containing compound (Cho) (14). In this work, we will compare the metabolite ratios differences between TLES patients, ONES patients and healthy controls, expecting to assist identification and classification of TLES and ONES in the early stage. We did this work in a retrospective way.

Figure 1 Negative craniocerebral MRI of patient M (A): a clear boundary between gray and white matter without significant abnormal signals in the brain parenchyma and hippocampal, no expansion of the ventricular system, normal size, and shape of the cistern and sulci. MRS of patient M (B) and healthy control N (C).

Under the authorization of the Medical Ethics Committee of the Second Hospital of Xiamen City, the subjects signed informed consent forms in this examination. The subjects included 23 patients with clinically diagnosed TLES (15 males and eight females, age: 32.9±13.3), nine patients with clinically diagnosed ONES (four males and five females, age: 39.8±20.8), and 15 healthy controls (five male and ten females, age: 27.0±4.26). All subjects underwent MRI and MRS examinations. TLES represents the most prevalent form of localization-related epilepsies. The diagnosis was based on the following criteria: (I) the region of interest (ROI) was in accordance with ictal onset zone owing to clinical features in consistence with seizures of temporal lobe origin and EEG (Figure 2), (II) the collected MRI and MRS confirmed qualitatively by experienced neuroradiology technicians to give diagnosis opinions, and then reviewed by authoritative clinical neurologists combining with clinical manifestations and electrophysiology to diagnose diseases. Clinically, all patients were diagnosed by means of clinical features, onset history, neurological exam, blood test, EEG, MRI and MRS. And demographic and clinical characteristic of subjects is given in Table 1 and Table 2. All patients were in the observation stage of hospitalization. After the habitual seizures of patients, they must be evaluated and confirmed by the neurologists, and these patients in postictal phase were immediately sent to the imaging center. The total acquisition time of both MRI and MRS was almost 1 h. 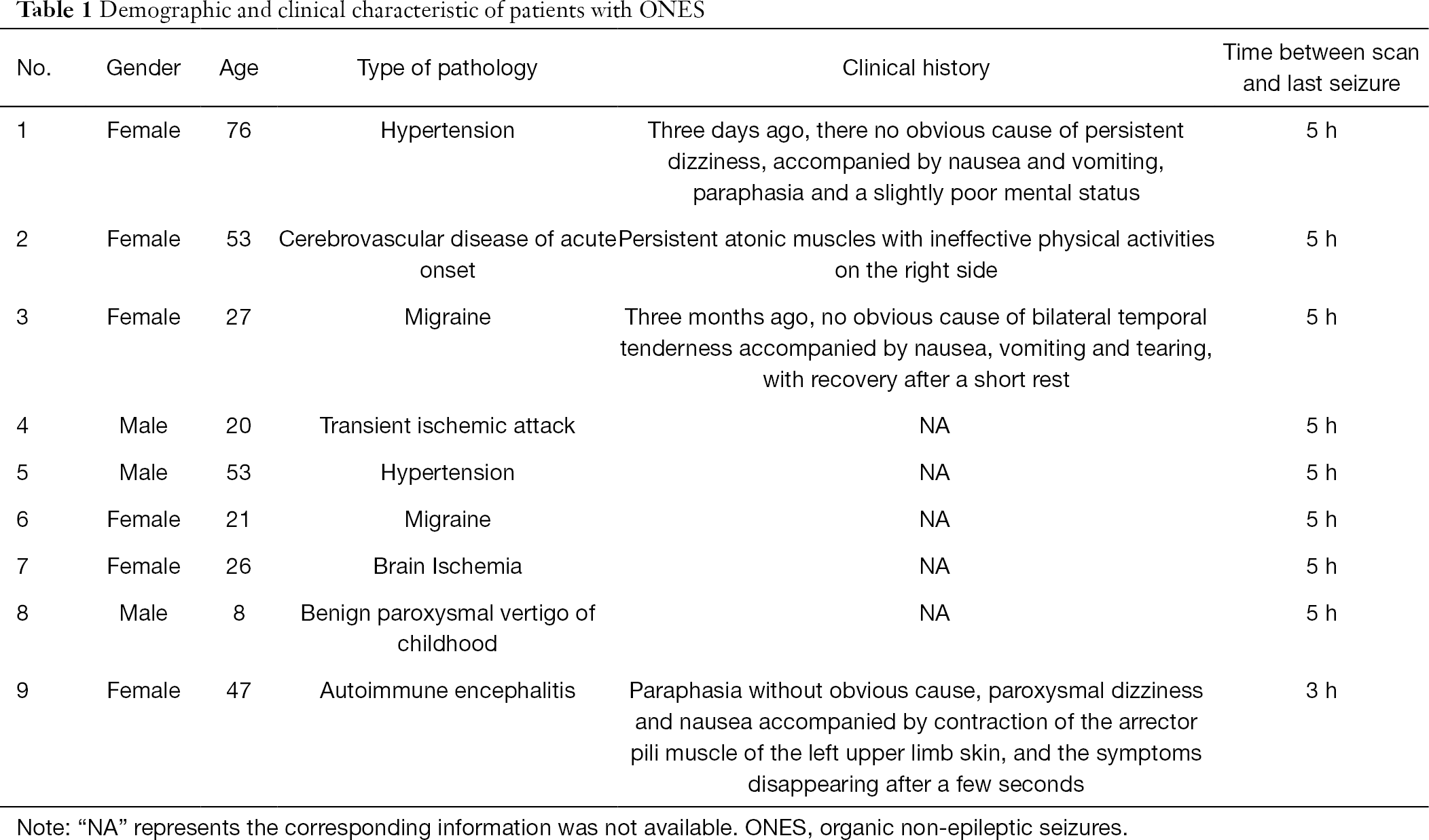 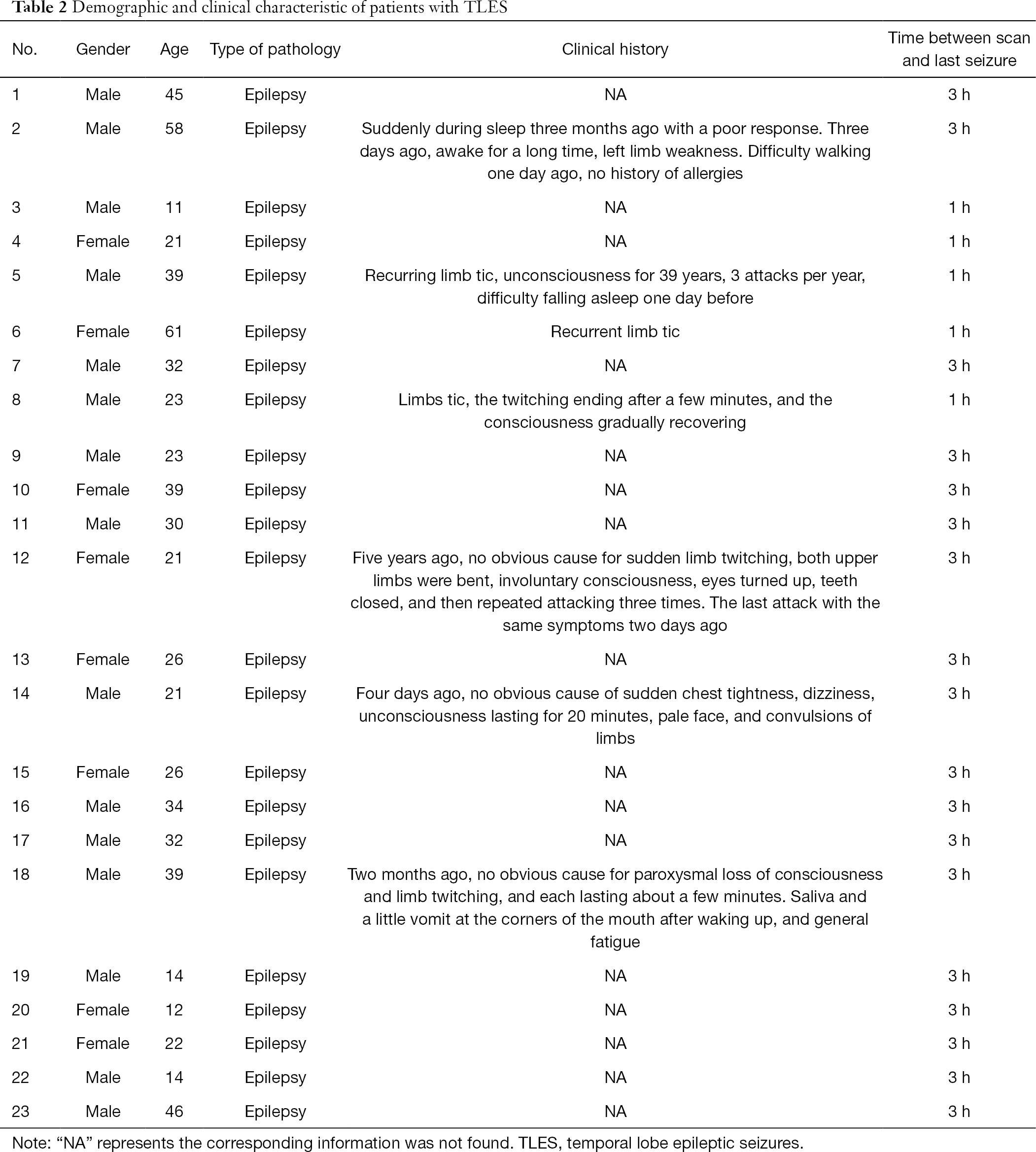 Small temporal pole encephaloceles are now recognized for being a hidden cause of MRI-negative TLES (15). The most common abnormality reported in TLES patients is a reduction in levels of NAA or NAA/Cr (16). Abnormalities in these parameters have also been noted in the contralateral temporal lobe and in other lobes (17), and no significant difference between the two hemispheres of the human brain (18). Accordingly, the ROI was set in the left and right temporal lobe regions. The single-voxel spectra were collected from the left temporal pole firstly and then the right. The location of the single-voxel spectral target volume was planned in high-resolution T2WI images. In addition, only neuroradiology technicians, who have at least five years of clinical experience, were allowed to manually place these ROIs. On the same scanner, MRS studies were acquired with imaging parameters: point-resolved spectroscopic sequence (PROBE-P), axial sampling plane, FOV =20 mm × 20 mm, the voxel thickness =20 mm, the chemical displacement imaging (CSI) layer thickness =20 mm, NEX =8. The PROBE-P image (TR/TE =2,000/144 ms) was used in the coronal view. The subjects underwent an MRS scan to acquire the metabolite spectrum results and then conduct a comparative test to determine the difference between ONES and TLES (Figure 3). 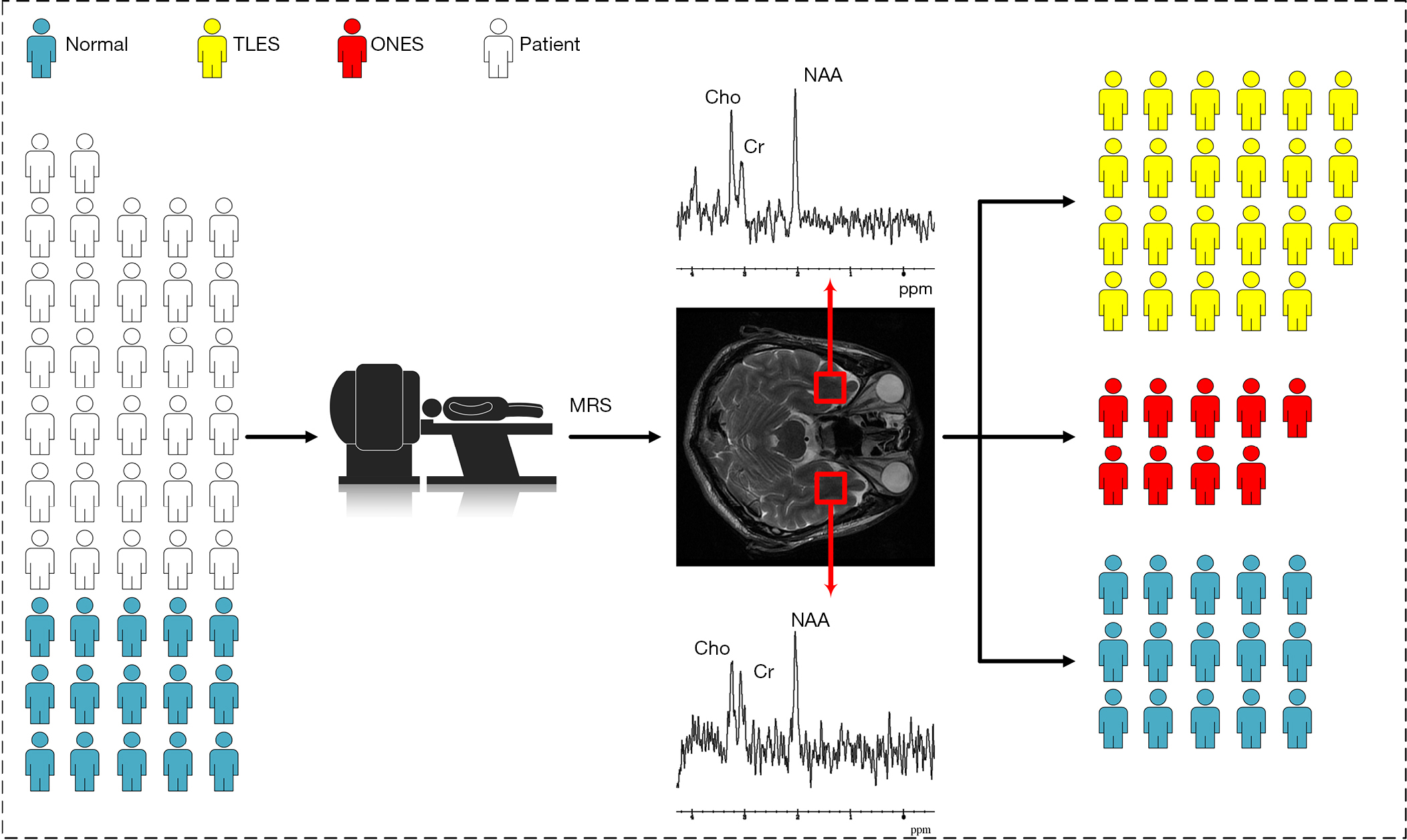 Figure 3 The process diagram of controlled trial by MRS: placement of ROI over the left and right part at the temporal pole regions of patient M with epilepsy, obtaining the contents of N-acetyl-aspartate, Creatine, and Choline.

After the acquisition, the data were automatically processed in the default manner by using the MR spectroscopic post-processing software package (SAGE 7.1) built in the GE 1.5T system. The technicians and authors did not perform any extra processing. To determine the relative concentration, integrations over ranges of chemical shifts are as follows: NAA 2.20–1.80 ppm, Cho 3.34–3.19 ppm and Cr 3.12–2.97 ppm. The following metabolites ratios were measured: NAA/Cr, NAA/Cho, NAA/(Cho + Cr), Cho/Cr (19).

Statistical analyses were performed by the Mann-Whitney U test with age as covariate (20), and our data met the assumptions of the Mann-Whitney U test. Considering the influence of multiple comparisons on the P values, P values have been processed with the Bonferroni correction. The entire metabolic contents of NAA, Cho, and Cr were obtained by MRS, and NAA/Cr, NAA/Cho, NAA/(Cho + Cr), Cho/Cr were calculated. Differences of statistical significance (P<0.05) were taken into consideration.

The difference between TLES group and ONES group was reflected only on NAA/Cr, which has not been found in the references to the best of our knowledge. Besides, NAA/Cr, NAA/Cho, and NAA/(Cho + Cr) ratios in temporal pole of TLES group in postictal phase were lower compared with healthy controls, suggesting a decrease as demonstrated by a previous study (20).

Non-epileptic seizures (NES) resemble epileptic seizures (ES) in outward appearance, even though their causes are very different. Differences in metabolites are common in brain research. Previous studies on the metabolites of epilepsy mainly focused on NAA, Cr, and Cho. In neuro histochemical studies (1), NAA, localized in perikaryal, axons, and dendrites of neurons, is synthesized mainly in neuronal mitochondria. Another metabolite, Cr, is a reliable marker of brain energy metabolism and is considered as a marker of membrane integrity (1). Moreover, previous studies indicate that NAA concentration decreases during medial TLES (1), the mobility of choline increases in postictal phase of seizures (14,21). Decreased NAA was present in the temporal lobe of TLES patients, indicating that the change was characteristic of the focus of the seizures (Figure 4). Low NAA may reflect the degree of seizure discharge originating in the temporal lobe. The previous study (20) showed statistically significant decreases in NAA/Cr, NAA/Cho and NAA/(Cho + Cr) immediately after ictus in TLES group as compared with control data and those ratios in TLES group in interictal phase. In contrast, no statistically significant difference was presented between TLES group in interictal phase and control data. Our result revealed that NAA/Cr, NAA/Cho, and NAA/(Cho + Cr) ratios in temporal pole of TLES group in postictal phase were lower compared with healthy controls, suggesting a decrease demonstrated by a previous study (20). The majority of ONES (22) are caused by traumatic experiences, developmental factors, vasovagal mechanisms, or other less benign cardiac etiologies.

While no single diagnostic method works perfectly to determine whether loss of consciousness with associated convulsions results from ES or NES, accurate metabolites measurement could be an efficient diagnostic tool, and MRS will be helpful. MRS is used to investigate seizures, which displays highly aberrant metabolism. It is wise to use MRS to locate the focus area and detect brain metabolites (23).

At present, the brain metabolites researches on NES are still very rare. However, when measured in the first 2 h after the index event, serum lactate level has a high clinical utility in the differential diagnosis of ES and NES (24). And epidemiological evidence implies that epilepsy and ONES may be comorbid conditions, such that the existence of one condition increases the risk of the other (25). Our result reported in this work provides a new idea for TLES and ONES. Namely, NAA/Cr in the postictal phase can be a reference value for distinguishing TLES from ONES, and MRS detection has excellent potential in TLE related metabolites content changes. If the data to be processed is too large, using artificial intelligence to analyze MRS may be a wise choice (26,27).

However, there are still some limitations to this study. When comparing ONES group, we can only ensure NAA/Cr ratio in our study is statistically different from that in TLES group. What’s more, many kinds of neurological diseases can affect the metabolism of NAA and Cr. Therefore, when faced with other diseases, there is no guarantee that NAA/Cr ratio is the same as that of non-epileptic patients involved in this research. Besides, the hypothesis needs to be tested in a prospective manner, with a larger sample size of ONES testers, to result in a firmer conclusion.

In conclusion, we found that TLES patients and ONES patients had NAA/Cr differences in the postictal phase. This finding suggests MRS can be an effective method in diagnosing or studying brain diseases like ES and NES. This result requires prospective verification of a large number of TLES and ONES patients to promote the development of the medical problem of epilepsy.

We sincerely thank all participants in this project and all of our collaborators in the second affiliated hospital of Xiamen Medical College.

Conflicts of Interest: All authors have completed the ICMJE uniform disclosure form (available at http://dx.doi.org/10.21037/qims-20-1147). The authors have no conflicts of interest to declare.

Ethical Statement: The authors are accountable for all aspects of the work in ensuring that questions related to the accuracy or integrity of any part of the work are appropriately investigated and resolved. All procedures performed in studies involving human participants were in accordance with the ethical standards of the institutional and/or national research committee(s) and with the Helsinki Declaration (as revised in 2013). Written informed consent was obtained from the patient.