Low-dose spiral computed tomography (CT) screening for the high-risk lung cancer population can reduce lung cancer mortality by 20% (1). Through the application of low-dose spiral CT, more solid pulmonary nodules can be discovered. In China, surgery is the preferred treatment for lung nodules in patients highly suspected with lung cancer (2). In a study of direct surgical resection of 8–20-mm pulmonary nodules, 35% of nodules were found to be benign postoperatively (3); thus, patients with benign pulmonary nodules may benefit from preoperative biopsy. CT-guided percutaneous biopsy is one of the easiest and fastest methods for the preoperative diagnosis of nodular lung cancer; it has high diagnostic accuracy (4), can provide a decision-making basis for appropriate clinical procedures, and can also relieve the psychological pressure on patients. However, biopsy has also been reported to lead to disease recurrence and may affect patients’ long-term survival (5,6). In cases of cancerous lung nodules, whether the percutaneous biopsy process increases the likelihood of recurrence and affects long-term survival remains controversial.

We collected the clinical information of patients who underwent radical resection and were postoperatively diagnosed with stage IA NSCLC between January 2010 and December 2014 from the databases of 7 medical centers. All data were processed according to the 8th edition of the Union for International Cancer Control’s tumor, node, metastasis (TNM) staging system (7). The following patient information was obtained: sex, age, smoking history, lesion size (≤2 vs. 2–3 cm), preoperative biopsy (yes vs. no), lesion location (left lung vs. right lung), pathological subtype (adenocarcinoma vs. squamous cell lung cancer and other types of NSCLC), and postoperative adjuvant chemotherapy within 6 months (platinum-based chemotherapy regimens). The CT-guided needle biopsy (CTNB) group mainly included patients with atypical imaging features or patients who refused direct surgical resection. 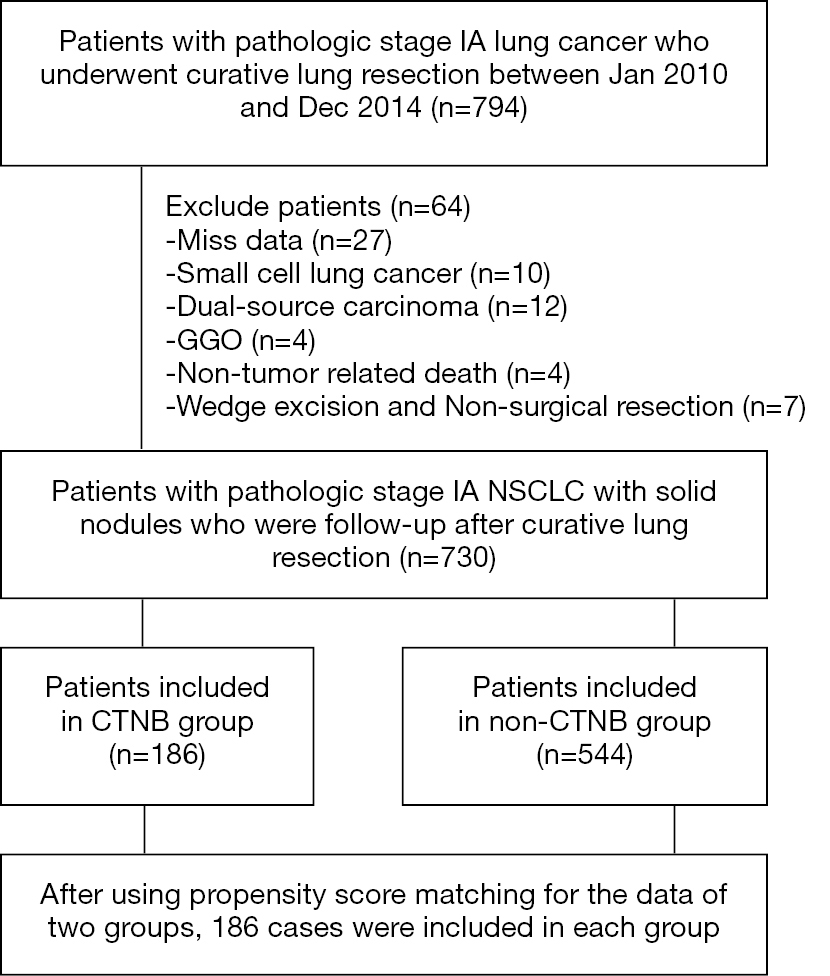 Evaluation of recurrence and survival

The patients’ CT scan information was reviewed; postoperatively, scans had been conducted at intervals of 6–12 months for a 5-year period. Metastatic lesions were diagnosed based on the occurrence of new lesions, as well as an increased size and number of lesions during the CT follow-up. The first instance of disease recurrence was defined as the endpoint of disease-free survival (DFS). If CT follow-up data could not be obtained, the time at which metastasis was first discovered (based on the patient’s complaint) was considered to be the endpoint of DFS.

All data were described as the means ± standard deviation for continuous variables and as numbers (percentages) for categorical variables. Data were compared using the t-test for continuous variables, and Pearson’s χ2 test or Fisher’s exact test for categorical variables. To ensure balance between the groups, propensity score matching (PSM) was carried out to match the patients in both groups (caliper value of 0.05). The matched variables included sex, age, smoking history, lesion size (≤2 vs. 2–3 cm), lesion location (left lung vs. right lung), and pathological type (adenocarcinoma vs. non-adenocarcinoma). The Kaplan-Meier method with the log-rank test was used to estimate the difference in time-to-event outcomes between the CTNB and non-CTNB groups using two-sided P values. Cox regression was used in a single-factor analysis to identify the factors affecting DFS in stage IA NSCLC patients. In all analyses, a two-sided P value <0.05 was considered to be an indication of a statistically significant difference. Statistical analyses were performed using SPSS version 25.0 software (SPSS, Chicago, Ill, USA). 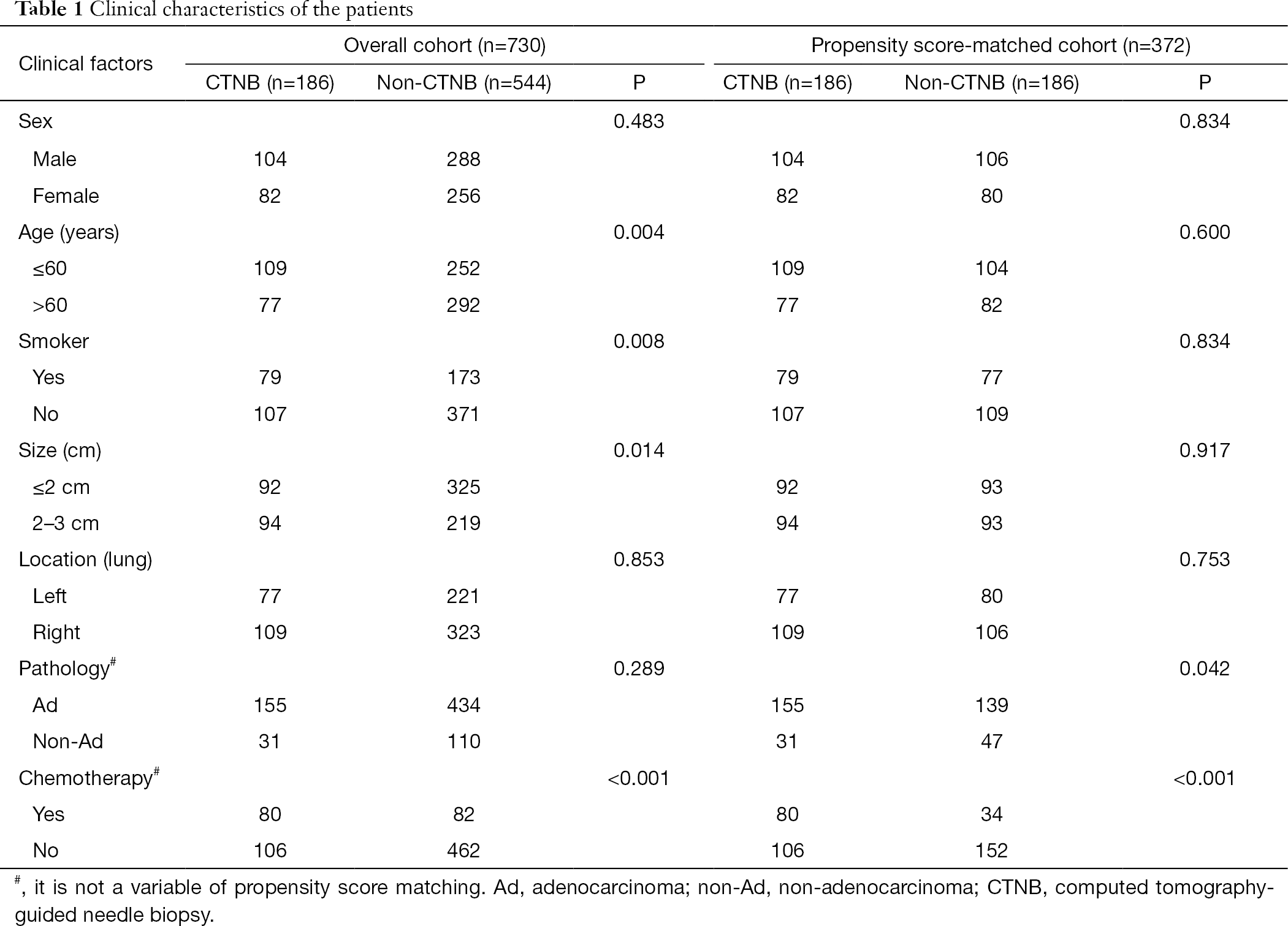 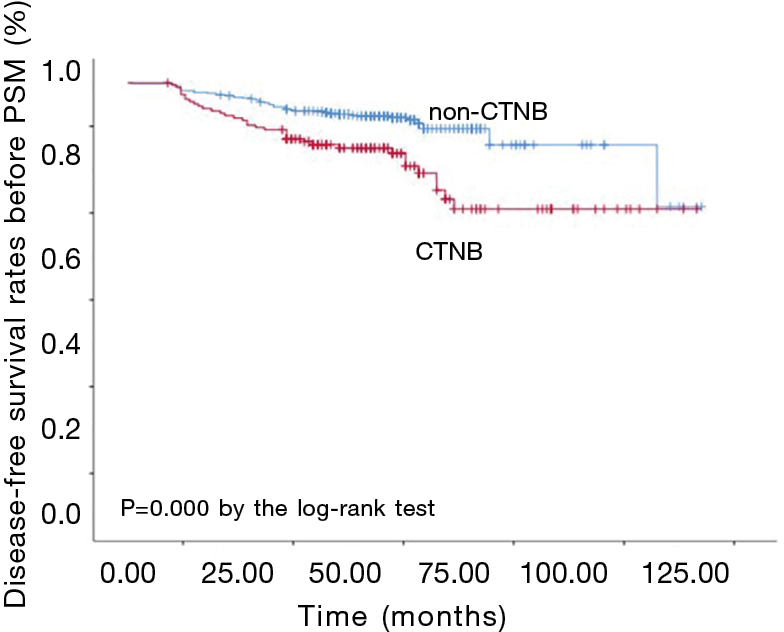 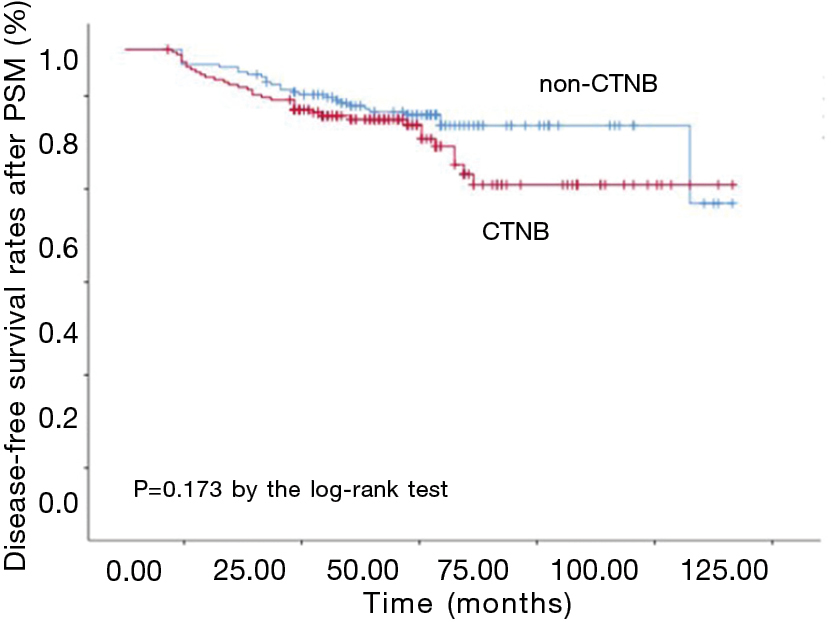 Univariate and multivariate analyses of recurrence 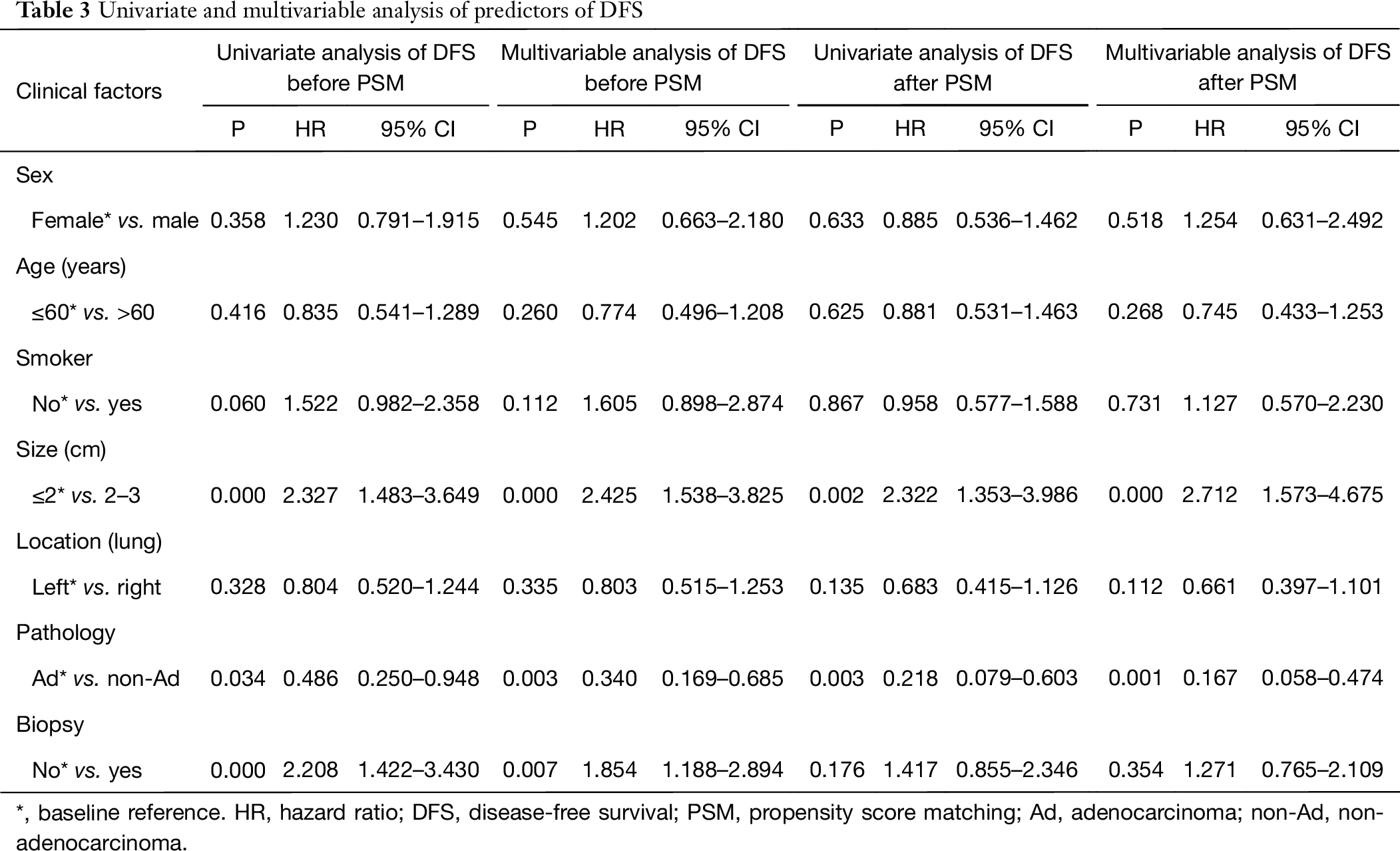 Compared with transbronchial lung biopsy, percutaneous biopsy has higher accuracy for diagnosing lung nodules (8). The diagnostic accuracy of biopsy for sub-centimeter lung nodules can reach 88–95% (9). Our study showed that the diagnostic accuracy of pathological biopsy for benign and malignant nodules reached 99.5% (185/186). Moreover, comparing the results of our team’s previous study (4) with those of the study by Tanner et al. (3), no significant differences in the two methods (biopsy vs. surgery) exist in the observation rates for benign and malignant pulmonary nodules (χ2=0.568, P=0.451). Hemorrhage and pneumothorax are the common complications of solid nodule percutaneous biopsy (10). With the development of percutaneous biopsy instruments and advances in surgical techniques, the incidence of both common and rare surgical complications can be effectively controlled.

With the continuous improvement of treatment methods, especially targeted and immunotherapeutic applications, patients with recurrence can achieve better OS. Therefore, we primarily used DFS as the study endpoint. The CTNB group in this study had significantly increased recurrence rates before PSM, and the DFS was also significantly shortened. To standardize the baseline data of the two groups, the PSM method was used. After PSM, no significant differences were noted between the recurrence rates of the two groups, or in DFS or OS. Therefore, we believe that preoperative biopsy does not promote recurrence or affect the DFS or OS of patients, which reinforces the results of previous retrospective research (19-22). However, other retrospective studies have reported that percutaneous biopsy may promote recurrence and metastasis of early-stage lung cancer and is extremely likely to affect the long-term survival of patients (5,23). At the same time, our study showed that adjuvant chemotherapy in the biopsy group did not have a DFS benefit for patients (χ2=0.001, P=0.970) and that adjuvant chemotherapy is not recommendable for patients after percutaneous biopsy. However, further prospective studies are needed to confirm these findings.

Recurrence following radical resection of early-stage NSCLC remains poorly understood and is multifactorial in nature. Multivariate analysis before PSM demonstrated that preoperative biopsy, lung adenocarcinoma, and tumor size were factors affecting the DFS of patients. The influencing factors of DFS in stage IA NSCLC were also analyzed after PSM. After matching the two datasets, we found that tumor size and lung adenocarcinoma were the influencing factors of DFS. Significant differences in DFS were observed between patients with tumor sizes ≤2 cm and those with tumor sizes of 2–3 cm (log-rank/χ2=9.960, P=0.002), which is consistent with the results of Zhang et al. (24). In the current multivariate analysis, tumor size (>2 cm) was again confirmed to be an important predictor of recurrence following resection of stage IA NSCLC. Studies have shown that non-squamous cell carcinoma is a risk factor for the prognosis of NSCLC (25). The present study categorized the pathological types into adenocarcinoma and non-adenocarcinoma, with the latter comprising squamous cell carcinoma and NSCLC with other pathological types. Lung adenocarcinoma type was also found to be a risk factor for the prognosis of NSCLC, with the DFS of patients with adenocarcinoma being statistically significantly shorter than that of non-adenocarcinoma patients (log-rank/χ2=10.428, P=0.001).

This study has some limitations that should be noted. Firstly, this study did not provide accurate and complete data for analyses of whether or not the lesions were subpleural nodules, the degree of pathological differentiation, the extent of infiltration, or the specific specifications of the percutaneous biopsy needles, which is the primary drawback of this study. Secondly, the design of retrospective studies has inherent flaws, which make further validation by prospective studies necessary. Thirdly, in the CTNB and non-CTNB groups, bias existed in the patient selection; although, we did attempt to reduce this bias through PSM analysis. Fourthly, this study utilized the overall recurrence rate, and metastatic sites were not included in the analyses. Finally, although we used DFS as the primary endpoint, the small number of DFS outcomes reduces the reliability of the multivariate analysis results.

However, this research also provides valuable information. In our Chinese study population, we found that the use of preoperative biopsy in patients with stage IA NSCLC undergoing radical resection of lung cancer did not increase the incidence of recurrence and did not affect patient survival. Moreover, this study is the first multicenter retrospective cohort study on preoperative biopsy for early lung cancer in China and provides guidance for future clinical practice.

Conﬂicts of Interest: All authors have completed the ICMJE uniform disclosure form (available at http://dx.doi.org/10.21037/qims-20-931). The authors have no conflicts of interest to declare.

Ethical Statement: The authors are accountable for all aspects of the work in ensuring that questions related to the accuracy or integrity of any part of the work are appropriately investigated and resolved. The retrospective study was conducted in accordance with the Declaration of Helsinki (as revised in 2013), and was approved by the Ethics Committee of the First Affiliated Hospital of the Army Medical University (IRB No. KY201905). Informed consent for the use of medical data was waived as the patient information was anonymized and de-identified prior to analysis.