Usefulness of computed tomography during arteriography in a selective arterial calcium agent injection test for pancreatic gastrinoma: a case description

Pancreatic gastrinoma is a rare pancreatic neuroendocrine tumor with an incidence of about 0.5–21.5 cases per million people worldwide. The most common sites are the duodenum (75%), pancreas (20%), and other organs (5%). Gastrinomas are malignant in about 60–90% of cases (1-5). Malignant gastrinomas originating beneath the duodenal mucosa often metastasize to the liver, even if the tumor diameter is ≤1 cm. Therefore, in patients with gastrinoma and Zollinger–Ellison syndrome, it is important to determine the number and site(s) of gastrinoma(s), as well as the presence or absence of liver metastases. However, the detection sensitivity of computed tomography (CT) and magnetic resonance imaging is about 10–50%, that of angiography is 20–50%, and that of somatostatin receptor scintigraphy is 30–70%.

Tumor size is strongly correlated with the detection sensitivity of any examination modality, and tumors of <1 cm in diameter are often difficult to detect (1,2). Therefore, the selective arterial calcium agent injection (SACI) test was developed as an effective method to detect small gastrinomas (2,6,7). In the SACI test, calcium gluconate is injected via a microcatheter into selected arterial branches to stimulate gastrin secretion from the gastrinoma located in the corresponding arterial territory. Generally, calcium gluconate is selectively injected into the gastroduodenal artery (GDA), superior mesenteric artery (SMA), distal or proximal portion of the splenic artery (distal SpA, proximal SpA), and the proper hepatic artery (PHA). The subsequent increase in the serum gastrin level is monitored using blood samples taken from the hepatic vein before and at 30, 60, 90, and 120 s after the injection. The location of the gastrinoma is determined based on a significant increase in serum gastrin levels in response to calcium gluconate (maximum serum gastrin level after calcium injection/serum gastrin level before calcium agent injection; with a median change of about 4.21 times baseline) (8). However, there are two limitations of the SACI test. First, the distribution of calcium varies between individual patients due to anatomical differences in the pancreatic arterial branches and the arterial territories. Second, there are many false positives following the injection of calcium gluconate into the GDA (median change of 4.15 times the baseline value) because calcium gluconate may stimulate normal gastrin-secreting cells in the gastric prepylorus and duodenal bulbus (8,9). It is possible to visualize the distribution of calcium following its injection by performing CT during arteriography (CTA). Here, we report a case in which the SACI test was combined with CTA for the diagnosis of a gastrinoma located in the pancreatic head and to exclude the presence of liver metastases.

A 49-year-old man with a history of repeated diarrhea, gastrointestinal ulcers, and hypergastrinemia was referred for testing. Contrast-enhanced CT revealed a 13-mm-diameter nodule located in the pancreatic head that showed gradual enhancement. Somatostatin receptor scintigraphy showed increased 111In uptake in a region consistent with the nodule in the pancreatic head. Thus, imaging suggested a gastrinoma located in the pancreatic head. He was diagnosed with a gastrin-positive neuroendocrine tumor following endoscopic ultrasonographic fine needle aspiration. An SACI test was performed to confirm whether the case had a solitary gastrinoma in the pancreatic head, and to determine the appropriate treatment plan. Because the patient had severe symptoms of gastrointestinal ulcers, proton pump inhibitors could not be discontinued during the SACI test. 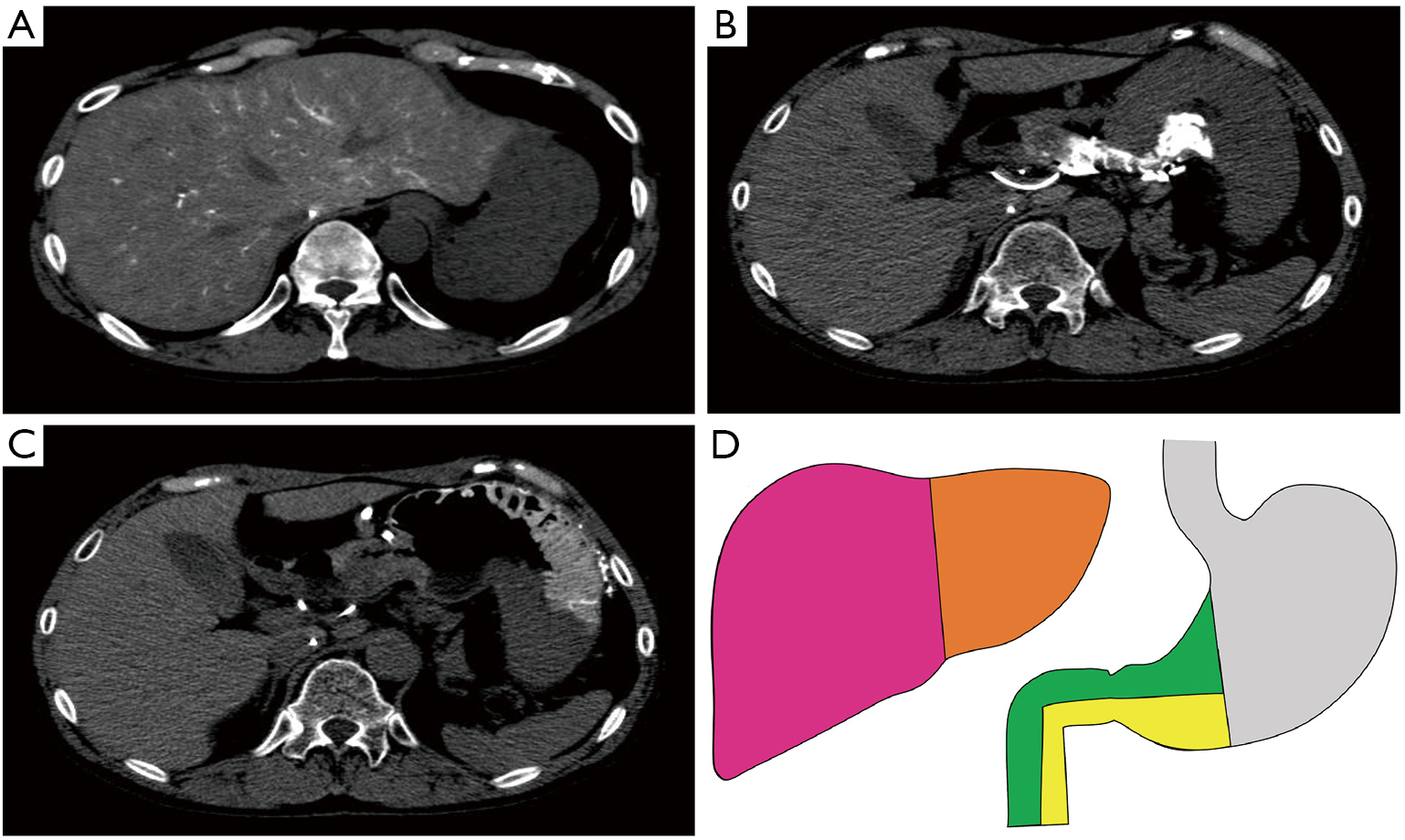 Determining the location of a gastrinoma or insulinoma is an important factor when determining the treatment plan, and the SACI test is an effective diagnostic method for this purpose (8,10). The SACI test is effective for detecting small lesions, but it has a high false positive rate (8). False positives are due to the distribution of calcium gluconate into the stomach and duodenum (8), as observed in our case. However, this limitation can be solved by mapping the vascular anatomy, and evaluating the region of each organ supplied by each artery. Therefore, in our case, we visualized and mapped the arteries suppling the pancreas, stomach, duodenum, and liver by performing CTA. Effective localization of a gastrinoma using the SACI test is dependent on super-selective stimulation through appropriate arteries. In particular, the serum gastrin level increases when calcium gluconate flows into the stomach and duodenum, even in the absence of a gastrinoma. The RGA and RGEA supply the gastric prepylorus and duodenal bulbus. When diagnosing the presence of liver metastasis, calcium gluconate should be injected into an artery that the RGA or RGEA does not branch from, or it should be injected directly into the hepatic artery. The RGA is a branch of the common hepatic artery (CHA) and PHA in about 40% of individuals, of the LHA in 40.5%, the RHA in 5.5%, and the GDA in 8% (11). Because the RGA branches from the hepatic artery in about 50% of individuals, it is important to evaluate the artery that the RGA branches from before performing the SACI test, and to perform the SACI test with super-selective injection of calcium gluconate into specific arteries. In terms of the vascular anatomy of the RGEA, the GDA forms the RGEA after the ASPDA branches from the GDA. One way to improve the accuracy of the SACI test is to specifically inject calcium gluconate into the PSPDA and ASPDA, or into the GDA and RGEA. If the injections into the GDA and RGEA yield similar increases in serum gastrin levels, these changes are likely to be due to stimulation of normal gastrin-producing cells. In addition, by evaluating the territory supplied by each artery, the region into which calcium gluconate flows can be accurately determined. In this way, the lesion’s location can be accurately determined. Accurate diagnosis of localization is important in performing surgical treatment.

There are some limitations to the report. In particular, no clear cut-off value has been reported for the changes in serum gastrin levels due to stimulation of normal gastrin-producing cells. In other words, if there are high gastrin levels after injection of calcium gluconate into the RGA or RGEA, the possibility of a submucosal gastrinoma in the stomach or duodenum cannot be eliminated. One solution is to perform the SACI test by super-selective injection of calcium gluconate into both the RGA and RGEA, as in our case. If the serum gastrin levels increase similarly after injection into the RGA and RGEA, it is possible that the increase is due to stimulation of normal gastrin-producing cells.

Conflicts of Interest: All authors have completed the ICMJE uniform disclosure form (available at http://dx.doi.org/10.21037/qims-20-1224). The authors have no conflicts of interest to declare.

Ethical Statement: The authors are accountable for all aspects of the work in ensuring that questions related to the accuracy or integrity of any part of the work are appropriately investigated and resolved. All procedures performed in studies involving human participants were in accordance with the ethical standards of the institutional and/or national research committees and with the Helsinki Declaration (as revised in 2013). Written informed consent was obtained from the patient.