In recent years, the development of computational power and image feature extraction has led to the use of high-throughput extraction of quantitative imaging features combined with different kinds of diagnostic models to assist clinical decisions, in a process called radiomics (1,2). Extensive research indicates that radiomics has shown promise in pulmonary nodule characterization, histopathologic staging, prognostic analysis, and recognition of gene mutations (3-7).

At present, chest low-dose computed tomography (LDCT) is the recommended modality for screening non-small cell lung cancer (NSCLC) (8). In addition to monitoring the size of pulmonary nodules, LDCT is also widely used in radiomics analysis (9-11). Owing to developments in computed tomography, the wide applicability of iterative reconstruction (IR) algorithms has enabled the realization of ultra-low-dose CT (ULDCT), which has a lower radiation dose than LDCT. The radiation dose of ULDCT is <0.2 mSv, which is comparable with the dose of chest radiography (12-14). As a third-generation IR, adaptive statistical iterative reconstruction-V (ASiR-V) has the ability to reduce image noise and is widely adopted in the image reconstruction of ULDCT (15,16).

Recently, there have been many reports on the reliability of ULDCT for screening NSCLC, with some researchers even recommending replacing LDCT with ULDCT for NSCLC screening (17-20). Nevertheless, these studies focused on conventional image diagnosis by the naked eye and ignored the ULDCT radiomic quantification in pulmonary nodules in vivo. The reproducibility of CT radiomic features between LDCT and ULDCT remains unknown. Moreover, some studies have shown that changing the weightings of IR can affect the reproducibility of CT radiomic features (21). However, there are only a few studies on the effect of IR algorithms on CT radiomic quantification considering the high number of commercial IR algorithms that are composed of different models (22-26). The effect of changing the weightings for different IR algorithms on the reproducibility of CT radiomic features needs to be investigated further.

From August 2019 to January 2020, we enrolled patients who underwent LDCT for pulmonary nodule follow-up in our radiology department. The inclusion criteria were as follows: (I) age ≥18 years and body mass index (BMI) ≤35 kg/m2, (II) acceptable diagnostic image quality of LDCT, (III) ≤5 pulmonary nodules without calcification, and (IV) solid nodules (SNs) and pure ground-glass nodules (pGGNs) with diameters of 4–15 mm (the diameter was calculated as the mean of the longest diameter and perpendicular diameter of a nodule) (27). The exclusion criteria were as follows: (I) LDCT with the tube voltage of 100 kV, (II) patients with diffuse consolidation and/or other diseases, making pulmonary nodules unevaluable, and (III) patients with pulmonary part-solid nodules (PSNs).

This study was approved by the institutional review board of our department, and informed consent was obtained from the participants.

All CT scans were performed on a revolution CT scanner (GE Healthcare, Milwaukee, WI, USA) and conducted with the patient in a deep inspiratory breath-hold. Patients were scanned using a conventional non-enhanced LDCT protocol, immediately followed by ULDCT. The interval between the two protocols was <1 min. All scans were used in helical mode, with a scan range from the costophrenic angle to the pulmonary apex.

The LDCT dataset was obtained with a collimation of 64×0.625 mm, beam pitch of 0.984:1, Assist tube voltage of 120/100 kV, Smart mA with a noise index of 14.1 HU (min/max mA, 50/680), and gantry rotation time of 0.28 s. Identical parameters were used for ULDCT, except that the tube voltage was fixed at 120 kV and the tube current was Smart mA with a noise index of 28 HU. LDCT images were reconstructed with ASiR-V 50%, which was described as LDCT50%. ULDCT images were reconstructed with ASiR-V 50%, 70%, and 90%, which were described as ULDCT50%, ULDCT70%, and ULDCT90%, respectively. ASiR-V levels used for the image reconstruction of ULDCT were based on the results of our previous study (published in Chinese domestic core journal). All images were obtained using a slice thickness of 1.25 mm with an increment of 1.25 mm. The image matrix was 512×512 pixels.

All patient identifiers (including name, age, sex, and medical record number) were removed from the images. Images were presented with a fixed window center of −600 HU and width of 1,600 HU. Image quality of LDCT was assessed by a radiologist (Doctor A with 5 years’ experience in radiology). Images with moderate or mild artefacts which do not affect diagnosis were seen as acceptable. Pulmonary nodule segmentation was performed by two radiologists (Doctor B with 6 years’ experience in chest CT and Doctor C with 8 years’ experience) in consensus using a semiautomatic segmentation and radiomic feature extraction tool (RadCloud version 3.0; Huiying Medical Technology Co., Ltd.). If the discrepancy of volumes of interest drawn by two doctors was more than 5% (29), the segmentation performed by a third reader (Doctor D with 26 years’ experience in chest CT) was chosen. The process of nodule segmentation for both SNs and pGGNs is shown in Figure 1.

Agreement between ULDCTs with different ASiR-V levels for all features 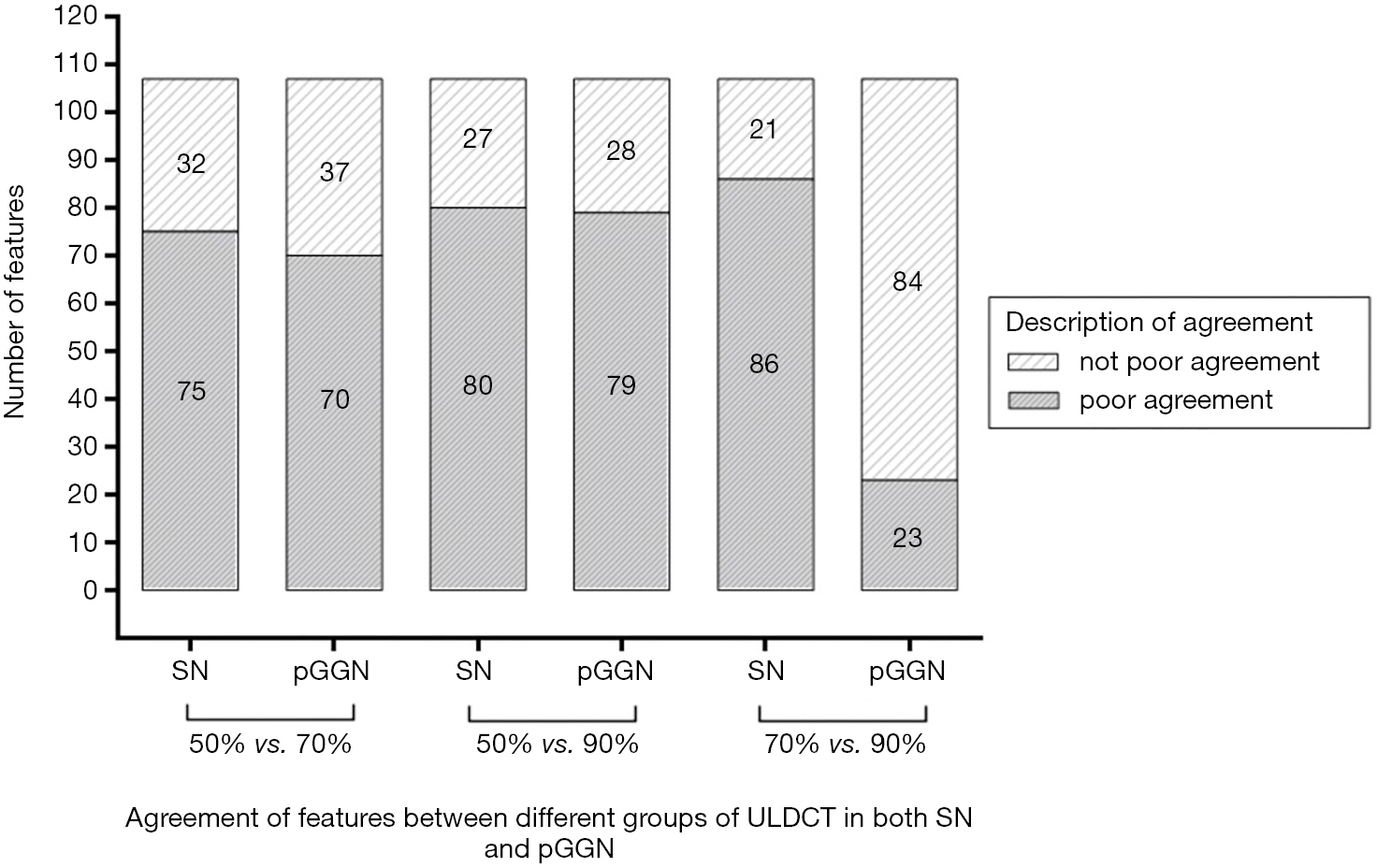 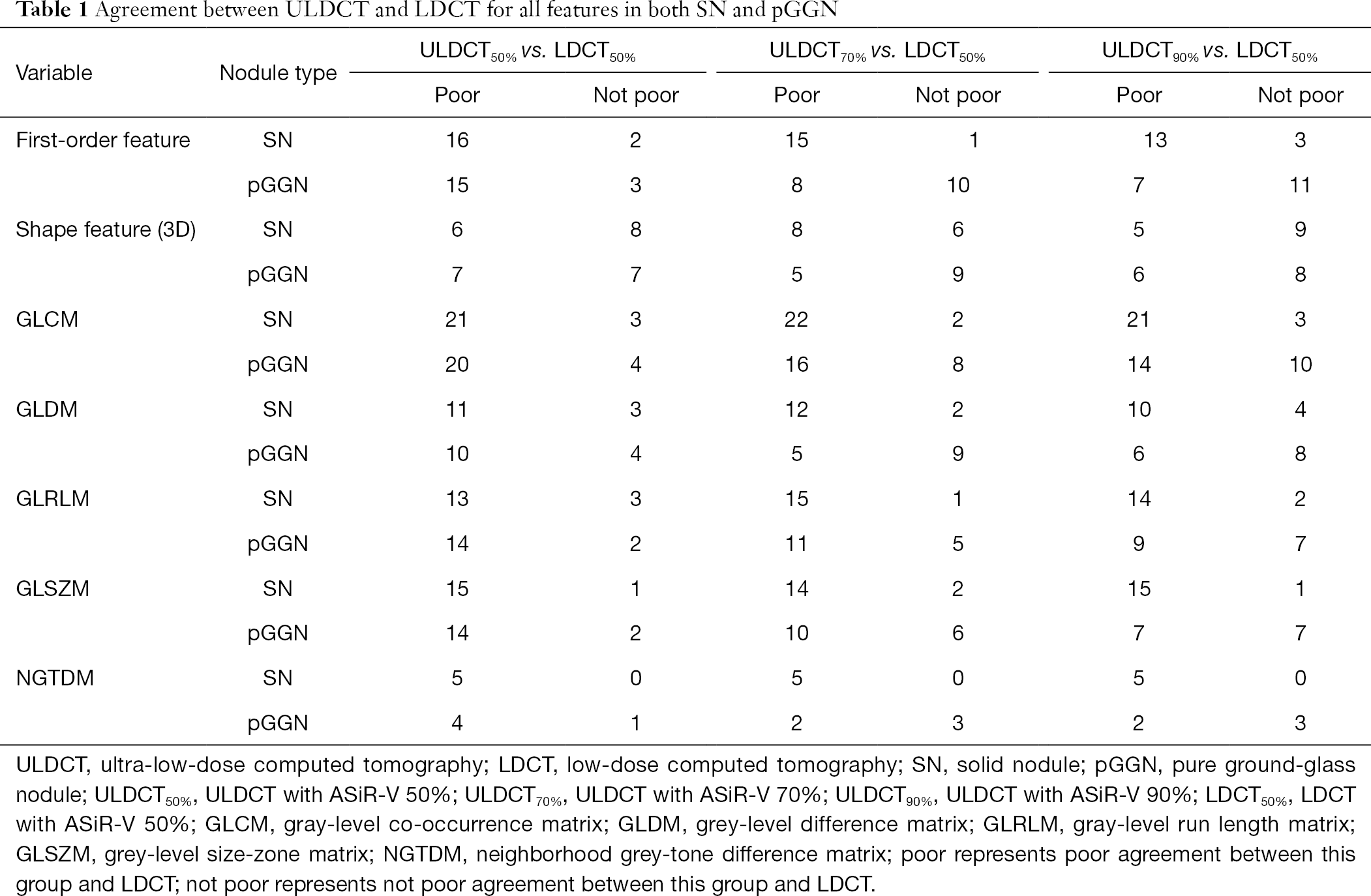 Proportion of features with CCC >0.9 between ULDCTs with different ASiR-V levels and LDCT

Table 2 Comparison of proportions of features with CCC >0.9 between ULDCT with different ASiR-V levels and LDCT
Full table

Because of the differences in acquisition parameters and reconstruction techniques of CT images, there was controversial about the reproducibility of CT radiomic features. In a study on the effect of reconstruction algorithms on CT radiomic features of pulmonary tumors, Kim et al. (32) found that 66.7 (4/6) first-order tumor intensity features and 75% (3/4) GLCM features were significantly influenced by the noise reduction strength of Sinogram Affirmed Iterative Reconstruction (SAFIRE) from level 3 to level 5. In the meantime, Prezzi et al. (21) investigated whether ASiR affected CT radiomic quantification in primary colorectal cancer and found that incremental ASiR levels determined a significant change in most statistical radiomic features. Our results also indicated that the ULDCT radiomic features would be strongly influenced by the change in ASiR-V levels in both SN and pGGN. There were at most 86 features with CCC<0.9 in SN, and the number in pGGN reached at most 79, which was more than 73% of the total features. These studies indicated that CT radiomic quantification would be markedly influenced by the change in ASiR levels, similar to other IR algorithms such as SAFIRE and ASiR.

In conclusion, we have confirmed that ASiR-V levels can also significantly affect the quantification of radiomics features computed at ULDCT in pulmonary nodules, similar to the radiation dose, and that pGGN was more sensitive than SN. The increase in ASiR-V levels could enhance the reproducibility of radiomic features between ULDCT and LDCT to some degree. In the future, higher ASiR-V levels may be taken when radiomics models based on the ULDCT images are used in the diagnosis of pulmonary nodules.

We would like to thank Editage () for English language editing.

Conflicts of Interest: All authors have completed the ICMJE uniform disclosure form (available at http://dx.doi.org/10.21037/qims-20-932). The authors have no conflicts of interest to declare

Ethical Statement: This study was approved by the institutional review board of our department (NO. M2019296), and informed consent was obtained from the participants.