Myopia is a common cause of vision impairment, projecting to affect approximately 50% of the world’s population by 2050 (1). Although the etiology of myopia has not been fully elucidated, lower ocular blood flow has been consistently reported in myopic eyes regardless of the imaging modalities (2). Optical coherence tomography angiography (OCTA) is a novel noninvasive modality that provides images with capillary-level resolution of the retinal vasculature (3,4). Moreover, OCTA has proven clinically useful for the assessment and diagnosis of myopic choroidal neovascularization (5,6).

OCTA is becoming increasingly popular in the investigation of the retinal and choroidal blood flow in myopia (7-12). OCTA parameters such as retinal vessel density (RVD) and choriocapillaris (CC) flow deficits provide information about the perfusion status of the retinal vasculature and CC. In OCTA studies, decreased, unchanged, or increased RVD has been reported in myopic eyes in comparison to emmetropic eyes (7-12). However, different from emmetropia, eyes with myopia usually have longer axial length, which may induce significant ocular magnification on OCTA images. According to the Littman (t = p × q × s) and the modified Bennett [q = 0.01306 × (x – 1.82)] formulae, the true size t of a retinal feature increases with axial length when imaging with the same fundus camera optical system (13,14). Currently, commercial optical coherence tomography (OCT) devices do not implement the function to correct image magnification. Therefore, it is essential to manually correct image magnification individually in myopic subjects for accurate measurements of OCT and OCTA parameters. It has been demonstrated that ocular magnification (attributable to axial length) significantly affects the OCT measurements including optic disc size and retinal nerve fiber layer thickness in myopia (15,16). However, there is limited literature has focused on the magnification error of quantitative OCTA measurements in myopic eyes. The purpose of this study is to investigate the potential impact of ocular magnification on retinal and CC blood flow quantification using OCTA in myopic eyes.

This study was approved by the Capital Medical University (Beijing, China) and the University of Washington (Seattle, USA). The study design followed the tenets of the Declaration of Helsinki. Signed informed consent was obtained from each subject before inclusion in the study.

SS-OCTA data were acquired using the PLEX® Elite 9000 SS-OCT system (Carl Zeiss Meditec, Dublin, CA, USA) with a central wavelength of 1,060 nm and a speed of 100-kHz A-scan rate. The 6×6 mm2 scanning protocol was used for imaging, with 500 A-lines per B-scan and 500 B-scans with two repeated scans in each fixed location. OCTA data were generated using complex optical microangiography (OMAGc) algorithm (17). Per recommendation from the manufacturer, scans with signal strength less than seven or obvious artifacts were excluded from the analyses.

Retinal and CC slabs were segmented using a validated semi-automated segmentation method (18). The retinal vasculature slab was defined as a slab extending from the inner limiting membrane to the outer plexiform layer. Following the guidelines in the previous study (19), the CC slab in myopic eyes was defined as a slab extending from approximately 4 to 14 µm below the outer boundary of Bruch’s membrane (BM). The CC en face flow images were generated using the sum projection, followed by removal of the retinal vessel projection artifacts (20) and compensation for the CC signal strength due to heterogeneous optical properties of the retinal pigment epithelium (21) before the identification of CC flow deficits (FDs). All images were analyzed with MATLAB (R2017b; MathWorks, Inc., Natick, MA, USA).

The retinal vessel area density (RVAD) and retinal vessel skeleton density (RVSD) were calculated from the en face retinal flow images using our previously published algorithm (22). The percentage of CC FDs (CC FD%) was calculated using a previously described global thresholding method, followed by removal of the CC FDs with an equivalent diameter smaller than the normal intercapillary distance of 24 µm (21,23). All the parameters were quantified within a 5-mm-diameter circle centered on the fovea in the en face OCTA images (Figure 1). Examples of the en face retinal flow image, the en face CC flow image, and the quantitative maps are shown in Figure 2. 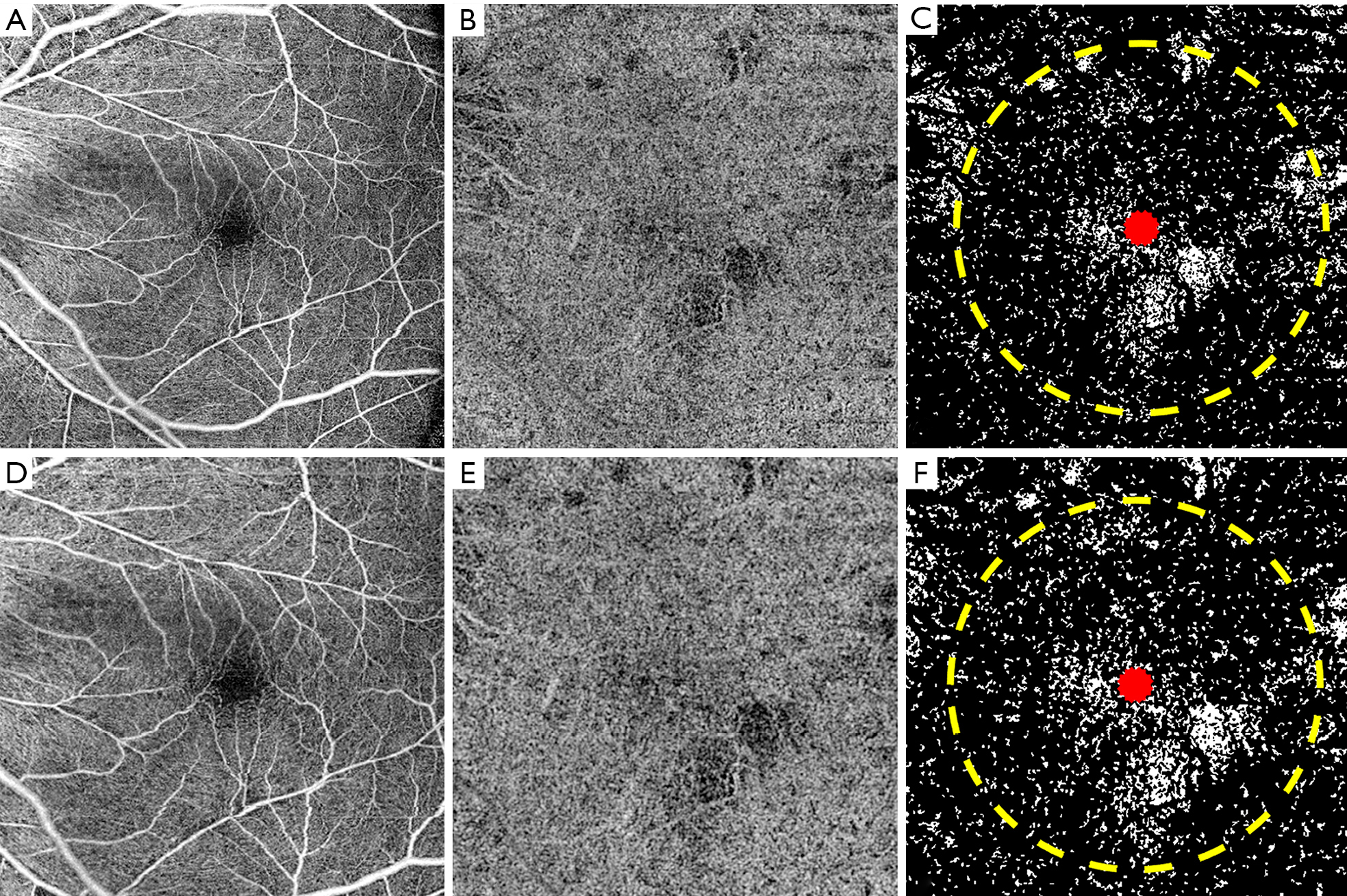 Statistical analysis was conducted using the commercial statistical software (IBM SPSS Statistics version 25.0; IBM Corporation, Armonk, NY, USA). Variable normality was inspected using histograms and the Shapiro-Wilk test. The OCTA measurements before and after magnification correction were compared with paired t-test or Wilcoxon matched-pairs signed-rank test as appropriate. For all comparisons, a P value of less than 0.05 was considered statistically significant.

Comparison of OCTA measurements before and after image magnification correction 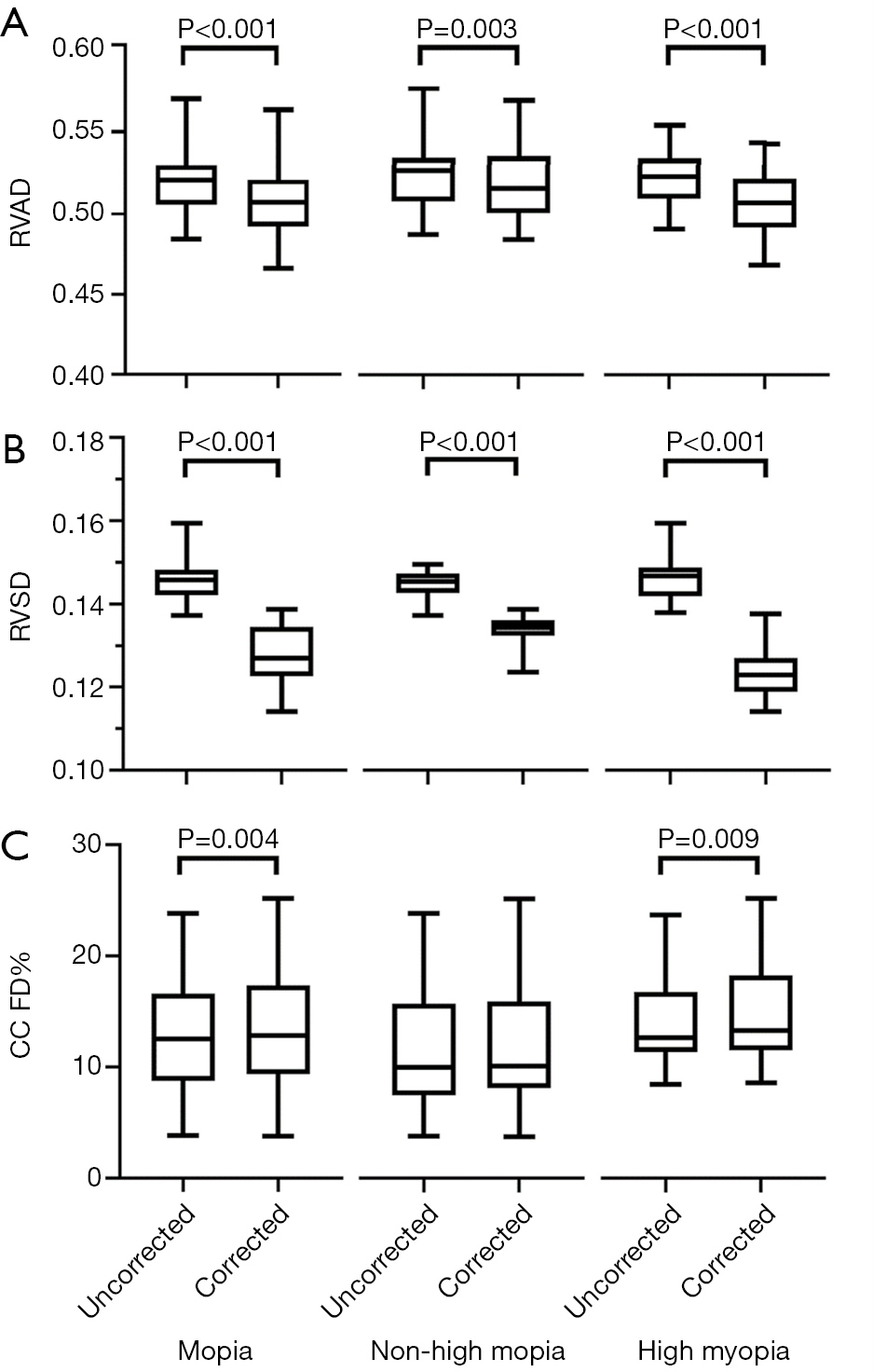 In the current study, we evaluated both RVAD and RVSD measurements from the 6×6 mm2 OCTA scans in myopic eyes. Our results showed that both the corrected RVAD and the corrected RVSD measurements significantly decreased after correcting ocular magnification. In OCTA, the scan area of 6×6 mm2 was calculated from the linear distance on the surface of the retina subtended by an angular size of approximately 20°×20° using the default axial length adopted by the OCT system. In myopic eyes, a longer axial length would result in a larger retinal area being scanned than the nominal 6×6 mm2 area, which makes the retinal vascular network appear artificially denser.

For accurate comparison of the interocular OCTA parameters, RVAD and RVSD were quantified within a 5-mm-diameter circle centered on the fovea in the present study. After correcting magnification in myopic eyes with longer axial length, the foveal avascular zone occupied a relatively larger portion in the 5-mm-diameter circular region, resulting in decreased RVSD measurements from the corrected images compared with the uncorrected ones. Meanwhile, parts of the large-caliber vessels were also excluded from the measuring circle after magnification correction. As a result, the corrected RVAD was lower than the uncorrected RVAD in myopic eyes. Therefore, for more accurate quantification of RVAD and RVSD in myopic eyes, the ocular magnification effect should be taken into consideration.

We also evaluated the magnification effect on the CC blood flow quantification since abnormal CC flow has been reported in myopic eyes (12,25). In the current study, CC en face flow images were generated from a 10-µm-thickness slab below BM based on CC thickness measurements in myopic eyes using our previously described algorithm (unpublished data) (26). No statistically significant difference was observed between the corrected and uncorrected CC FD% measurements in eyes with non-high myopia. In our preliminary observation, CC FDs in non-highly myopic eyes were basically uniformly distributed in the central 5-mm-diameter circular region. As a relative value, CC FD% measurements did not change before and after ocular magnification correction in eyes with non-high myopia. However, the current study showed that the mean corrected CC FD% was significantly higher than the uncorrected CC FD% in eyes with high myopia. In highly myopic eyes, CC FDs might merge into a large area where CC was completely lost. When these lesions were located in or around the measuring circular region, significant differences were observed between the corrected and uncorrected CC FD% measurements (Figure 1). Consequently, when calculating CC FD% in highly myopic eyes, ocular magnification correction is recommended.

While we have demonstrated that magnification correction should be considered for more accurate quantification of OCTA images in myopic eyes, this consideration would be equally applicable to hyperopic eyes. In eyes with hyperopia, a shorter axial length will result in a smaller retinal area being scanned than the nominal defined area in OCT. As a result, the true values of RVAD and RVSD should have been higher than the uncorrected values in hyperopic eyes. Furthermore, magnification correction is also important for accurate assessment of longitudinal changes in retinal and CC blood flow in eyes undergoing axial growth. The decrease of RVAD or RVSD may not be detected if OCTA measurements were not corrected with elongated axial lengths in myopic eyes. When it comes to myopic eyes or hyperopic eyes with retinal or CC pathologies, changes in RVAD, RVSD, and CC FD measurements before and after magnification correction are even more complicated. Therefore, it is recommended to correct all quantification values derived from OCTA for accurate and reliable assessments of the retinal and CC blood flow in all ametropic eyes.

We acknowledged several limitations to our study. First, due to the poor fixation and low vision status of some myopic subjects, not all OCTA images are optimal for quantitative analysis. Therefore, our study is limited by a relatively small sample size. However, this study still included myopic eyes with a broad axial length ranging from 24.50 to 33.22 mm, which demonstrated the magnification effect on retinal and CC blood flow quantification in low myopia, moderate myopia, high myopia, and extremely high myopia. Second, in the current study, image magnification error was corrected based on Bennett’s formula with an abbreviated axial length. For more accurate correction, detailed calculations utilizing the axial length, keratometry, ametropia, anterior chamber depth, as well as the lens thickness might be considered (14). However, measurements of multiple variables might introduce multiple measurement errors in the calculation. Since Bennett’s formula has been demonstrated differs little from more detailed calculations (27), we adopted Bennett’s method as our magnification correction algorithm.

In conclusion, the current study shows that ocular magnification significantly affects the results of retinal and CC blood flow quantification with OCTA in myopic eyes. For accurate determination of the OCTA derived parameters in myopia as well as other ocular disease investigations, magnification correction should be taken into consideration.

Funding: This work was supported by Carl Zeiss Meditec; and an unrestricted grant from the Research to Prevent Blindness. The funding organizations had no role in the design or conduct of this research.

Provenance and Peer Review: With the arrangement by the Guest Editors and the editorial office, this article has been reviewed by external peers.

Conflicts of Interest: All authors have completed the ICMJE uniform disclosure form (available at http://dx.doi.org/10.21037/qims-20-1011). The special issue “Advanced Optical Imaging in Biomedicine” was commissioned by the editorial office without any funding or sponsorship. RKW served as the unpaid Guest Editor of the specail issue and serves as an unpaid Deputy Editor of Quantitative Imaging in Medicine and Surgery. RKW received research support from Carl Zeiss Meditec and an innovative research award from Research to Prevent Blindness. RKW is a consultant to Carl Zeiss Meditec. The authors have no other conflicts of interest to declare.

Ethical Statement: This study was approved by the Capital Medical University (Beijing, China) and the University of Washington (Seattle, USA). The study design followed the tenets of the Declaration of Helsinki. Signed informed consent was obtained from each subject before inclusion in the study.