Near infrared (NIR) fluorescence imaging and sensing has been attracting much attention in biomedical applications during the past decades due to its non-invasive operation, high sensitivity and specificity, non-ionizing radiation as well as deep penetration in biological tissue (1). In comparison to other imaging techniques, such as ultrasound, X-ray, magnetic resonance imaging (MRI), and positron-emission tomography (PET), fluorescence imaging provides benefits such as low cost, bio-safety, and fast detection. Also, fluorescence imaging is capable of multicolor imaging and thus it could track many interesting cellular and/or molecular-level biological interactions (2).

Recently, switchable fluorescence probes (SFPs) have gained great interest for detecting specific environmental changes in biological tissue. They have high sensitivity and specificity to a certain stimulus (3-5). A SFP usually stays at an “off” state so its fluorescence is weak. When a stimulus is applied, it can be switched “on” to emit strong fluorescence. The types of the stimulus can be physical (such as temperature), chemical (such as pH) or biological (such as biomolecule interaction) (4). Among various SFPs, one of them is the temperature-switchable fluorescence probe (T-SFP) (6-12). When a polarity- and viscosity-sensitive fluorophore is encapsulated in temperature-sensitive polymers, the fluorescence could become temperature-sensitive. This is because when the temperature rises over the lower critical solution temperature (LCST) of the polymers, the polymers experience a phase transition from hydrophilic to hydrophobic. Thus, the encapsulated fluorophores experience a microenvironment change from water-rich to polymer-rich and therefore a change of the polarity and/or viscosity of the microenvironment. This change can significantly increase the quantum yield of the polarity- and viscosity-sensitive fluorophore. As a result, when a T-SFP stays in a temperature below the LCST, its fluorescence is usually weak. When temperature rises over the LCST, the T-SFP can emit strong fluorescence.

In our previous works (6), we summarized five parameters that characterize the performance of a T-SFP. They are: (I) the fluorescence peak excitation and emission wavelengths (λex and λem); (II) the fluorescence intensity ratio between its on and off states (Ion/Ioff); (III) the fluorescence lifetime ratio between its on and off states (τon/τoff); (IV) the temperature threshold to switch on the fluorescence (Tth); and (V) the temperature transition bandwidth (TBW). In this work, we synthesized, characterized, and selected a series of T-SFPs. We adopted two series of NIR fluorophores aza-BODIPY (ADP, we will use ADP for abbreviation in this work) and Zinc phthalocyanine (ZnPc) and four pluronic polymers. Each of fluorophore was encapsulated in one type of pluronic polymer to form temperature-switchable nanoparticles by sonication. The dyes in the ADP and ZnPc families are excellent NIR fluorophores and their quantum efficiencies vary in response to solvents’ polarity and viscosity change (8,9,13,14). The pluronic polymers (i.e., F127, F98, F68, and F38) contain two hydrophilic poly(ethylene oxide) (PEO) and one hydrophobic poly(propylene oxide) (PPO), and they are arranged in a PEO-PPO-PEO triblock structure. When the polymers form nanoparticles, the dye molecules may be more likely encapsulated inside the particles by the hydrophobic part. When the temperature is increased above a threshold, the particle structure may be changed significantly, which makes the dye environment more hydrophobic, less polar and more viscous. Thus, the polarity- and/or viscosity-sensitive dyes experience an increase of the quantum efficiency and the fluorescence emission intensity. By combination of the two series of dyes and the four polymers, we can select the nanoparticles with excellent temperature-switchable fluorescence properties.

We characterized these nanoparticles based on the above mentioned parameters. We also investigated several factors that might change their Tths. These nanoparticles can be potentially used for fluorescence imaging and sensing (15-25). This work has several novelties (1). This work adopted four pluronic polymers (F127, F98, F68, and F38). The four polymers have different lower critical solution temperatures (LCSTs) and thus provide a wide dynamic range of Tth (2). This work recognized two factors that could significantly affect the nanoparticle’s Tths: one is pluronic categories as mentioned in (I), and another is nanoparticles’ concentration. The nanoparticles’ concentration will affect their Tths significantly. Base on (I) and (II), we can synthesize the nanoparticles with a wide range and a precise control of Tths, and this is very useful when they are adopted for temperature sensing/imaging (IV). This work adopted two series of NIR dyes (ADP and ZnPC) for the synthesis and provide different spectral fingerprints for multi-color fluorescence imaging.

The ADP fluorophores include BF2-chelated azadipyrromethene (i.e., aza-BODIPY, ADP is used in this study for short. As a note, in the following paragraphs, when we refer ADP as a specific dye, it means azaBODIPY without any additional functional group unlike other three types do.), BF2-chelated 4-{2-[3-(4-hydroxyphenyl)-5-phenyl-1H-pyrrol-2ylimino]-5-phenyl-2H-pyrrol-3-yl}phenol (ADP(OH)2-Top), BF2-chelated [5-(4-hydroxyphenyl)-3-phenyl-1H-pyrrol-2-yl]-[5-(4-hydroxyphenyl)-3-phenylpyrrol-2-ylidene] amine (ADP(OH)2-Bottom), BF2-chelated azadipyrromethene with two cyanocinnamic acid groups (ADP(CA)2). They were synthesized at the Department of Chemistry, University of North Texas (Denton). The details of aza-BODIPY fluorophores can be found in our previous works (8,9,26-28). The ZnPc fluorophores include zinc phthalocyanine (ZnPc), zinc 2, 9, 16, 23-tetra-tert-butyl-29H, 31H-phthalocyanine (ZnttbPc), and zinc 1, 2, 3, 4, 8, 9, 10, 11, 15, 16, 17, 18, 22, 23, 24, 25-hexadecafluoro-29H, 31H-phthalocyanine (ZnHFPc). They were purchased from Sigma-Aldrich Corporate (St. Louis, MO, USA). The details of ZnPc related fluorophores can be found in manufacturer’s datasheet (29). The polymers include pluronics F127, F98, F68, and F38. Tetrabutylammonium iodide (TBAI), pluronic F127, and chloroform was purchased from Sigma-Aldrich Corporate (St. Louis, MO, USA). Pluronic F98, F68, F38 were purchased from BASF Corporation (Vandalia, IL, USA). All chemicals were used as received without further purification.

The synthesis protocol is from our previous work (8,9). 5 g (or 1 g) pluronic polymer (F127, F98, F68, or F38) was dissolved in 100 mL DI water (pH=8.5) to make 5% (or 1%) pluronic solution. Each of ADP-series fluorophores (ADP, ADP(OH)2-Bottom, ADP(OH)2-Top, or ADP(CA)2) or ZnPc-series fluorophores (ZnPc, ZnttbPc, or ZnHFPc) was selected and encapsulated in the nanoparticles. 0.4 mg ADP fluorophore (or 1.2 mg ZnPc fluorophore) was mixed with 4.8 mg TBAI (cosolvent) and then dissolved in 6 mL chloroform. The fluorophore solution was added dropwise to 15 mL of the pluronic solution, with 600 rpm stirring. The mixture was then under sonication (power =40 Watts) for 4 mins to form fluorophore-encapsulated pluronic-based nanoparticles. The mixture was stirred at 475 rpm in chemical hood overnight until chloroform evaporated thoroughly. The solution was filtered (filter pole size: 450 µm) to purify the sample. All steps were conducted at room temperature. The synthesis protocols are the same for all polymers’ and dyes’ combination.

The measurement system was developed in our previous work (6). Briefly, the excitation light was from a sub-nanosecond nitrogen-pumped pulsed dye-laser with wavelength centered at 655 nm and pulse width ~0.8 ns. One band-pass interference excitation filter (650/60 nm) was placed in front of the laser output. The nanoparticle sample (volume =3 mL) was placed in a quartz cuvette and submerged in a transparent glass tank filled with water. The water temperature was controlled via a temperature controller. The laser beam illuminated the sample in the cuvette and the emitted fluorescence photons were captured by a photomultiplier tube (PMT) at a 90-degree angle from the laser beam. One band-pass interference emission filter (711/25 nm) was placed in front of the PMT. Finally, the signal was acquired in a multichannel oscilloscope. The fluorescence pulses were recorded at different temperatures. The excitation laser pulse was also measured. We adopted the measured laser pulse as an impulse response function (IRF) of the system. At each temperature, we counted the signal pulse peak as fluorescence intensity. In order to calculate fluorescence lifetime, we de-convolved the normalized fluorescence pulse from IRF and got an exponential decay function. We counted the decay constant as fluorescence lifetime. It is worth mentioning that we measured all the samples’ fluorescence response to a temperature change through conventional heating (i.e., water bath) rather than ultrasound-induced heating, because the purpose of this study is to quantify the thermal properties of these agents.

Characterization of thermal switchable properties of fluorescence from the nanoparticles 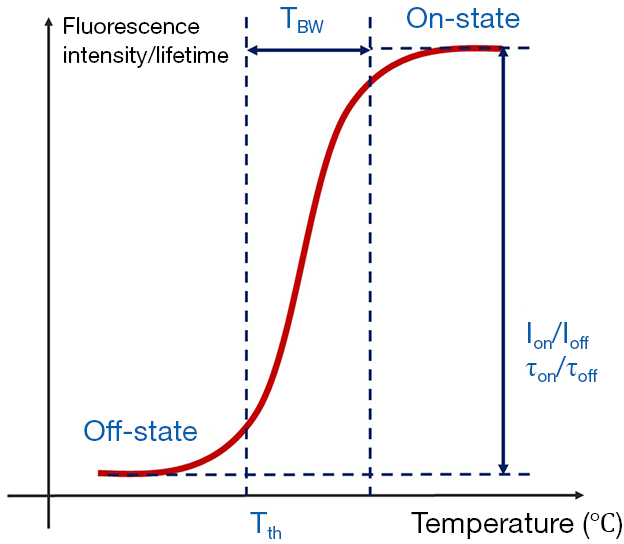 Fluorescence intensity and lifetime vs. temperature

As described in the Methods, we measured the nanoparticles’ fluorescence intensity and lifetime as a function of temperature and characterized the measurement results. Figure 2 shows two examples. In Figure 2A, it shows the measurement of ADP encapsulated in 5% pluronic F98 nanoparticle. It has a high Ion/Ioff =~1,845, and a high τon/τoff =2.86 (τon =2.11 ns), which means both its fluorescence intensity and lifetime increase significantly when the temperature rises over its Tth. Its Tth =~28 °C, and Tbw =~6 °C. Figure 2B show the measurement of ZnttbPc in 1% pluronic F68 nanoparticle. Similarly, it also has a high Ion/Ioff =~16,395. Differently, its fluorescence lifetime slightly changes with a temperature rise. Its τon/τoff =1.06 (τon =3.25 ns). Its Tth =~56 °C, and Tbw =~15 °C. Based on these two examples, we found their Ion/Ioff, Tth, τon/τoff, and Tbw varied. Their characterizations were also presented in Table 1. In this work, we synthesized all the nanoparticles based on different combinations of fluorophore categories and pluronic categories as well as pluronic concentrations. Then, we characterized and selected these nanoparticles based on their thermos-switchable properties of fluorescence, from three perspectives: (I) those with a high Ion/Ioff; (II) those with a high τon/τoff; and (III) those with various Tths. Note that some nanoparticles didn’t show a thermal-switchable property (i.e., a low Ion/Ioff and/or τon/τoff) and were excluded. After selection, we studied several factors that affected the nanoparticles’ Tths. The results were presented and discussed in the next sections. 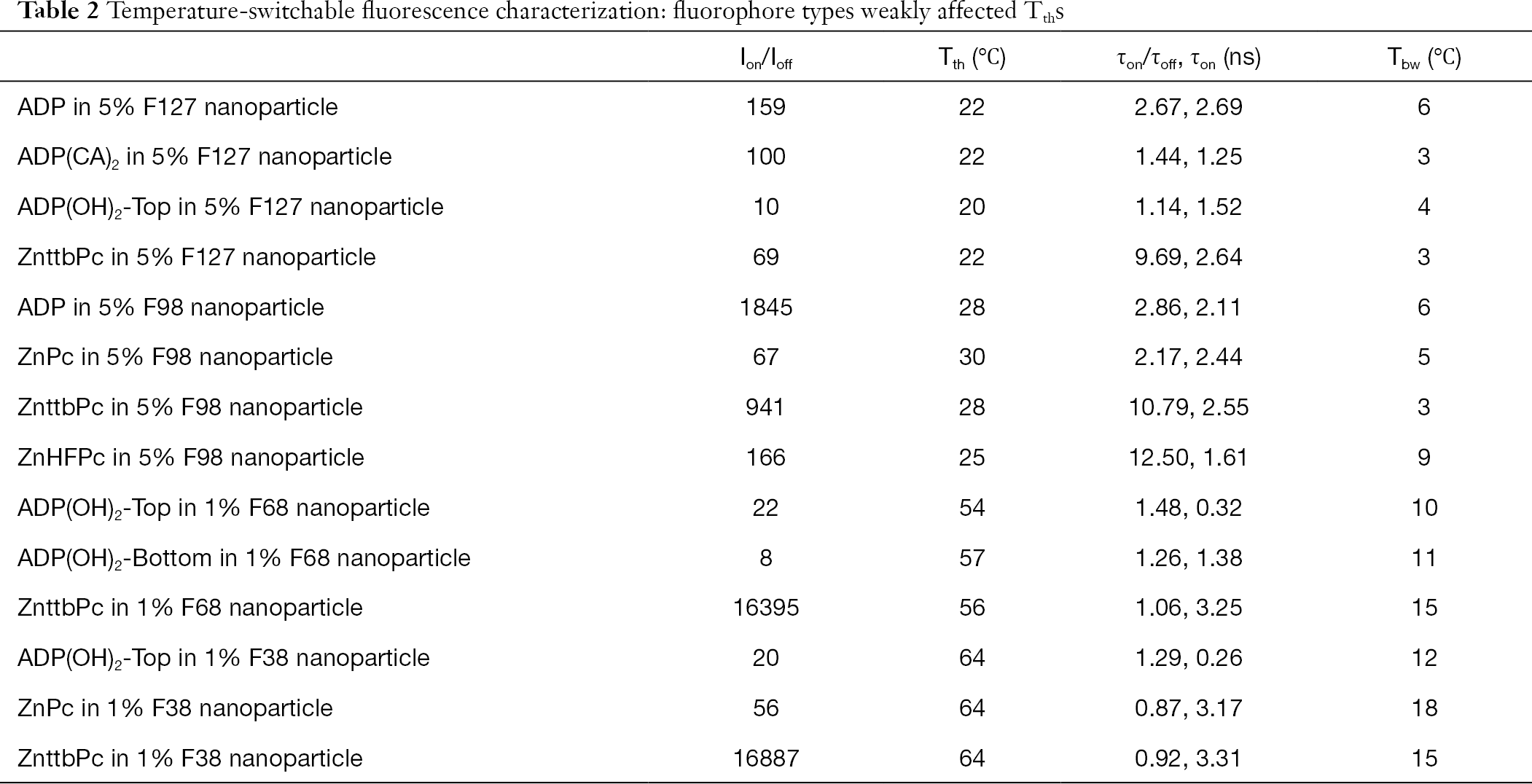 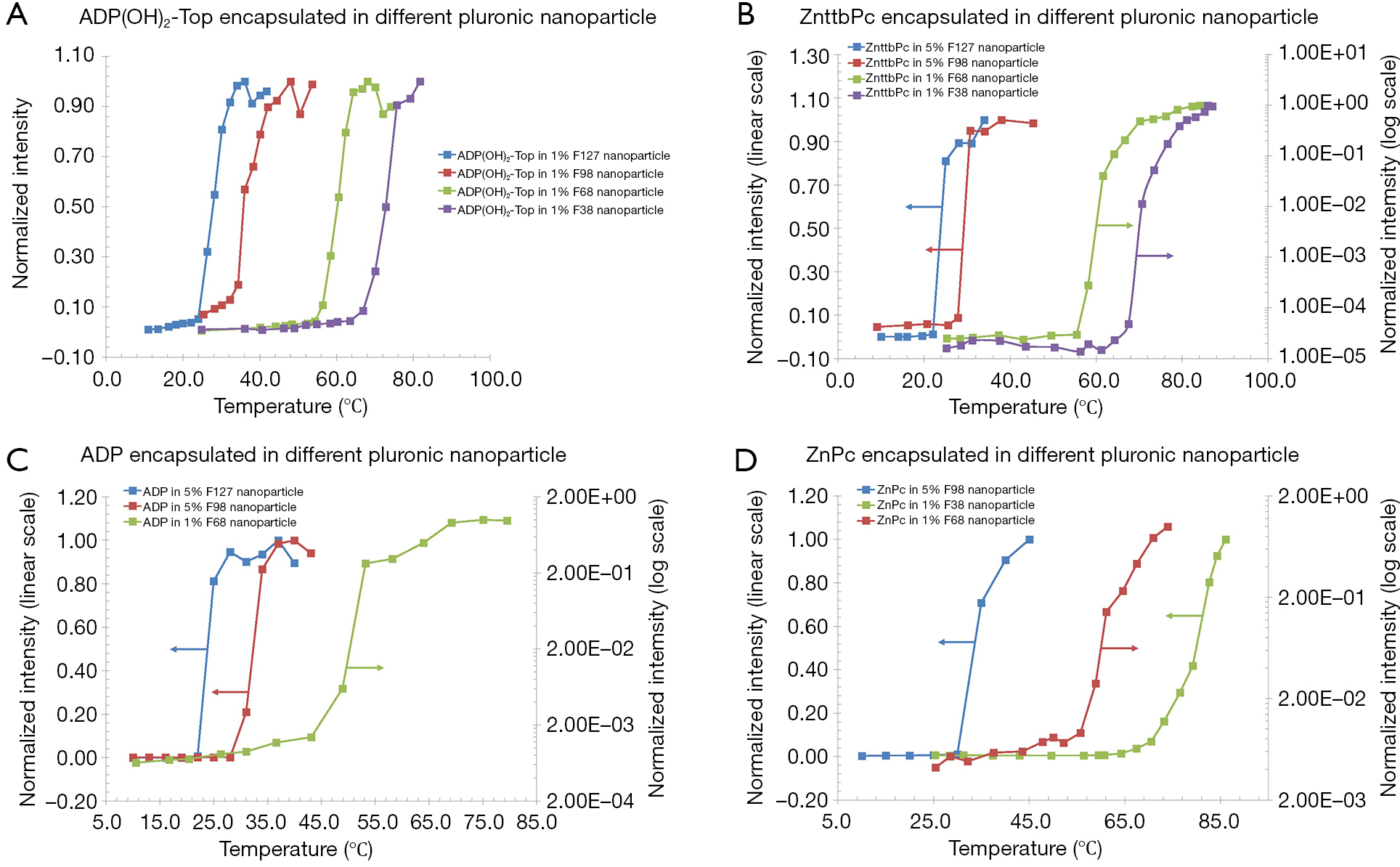 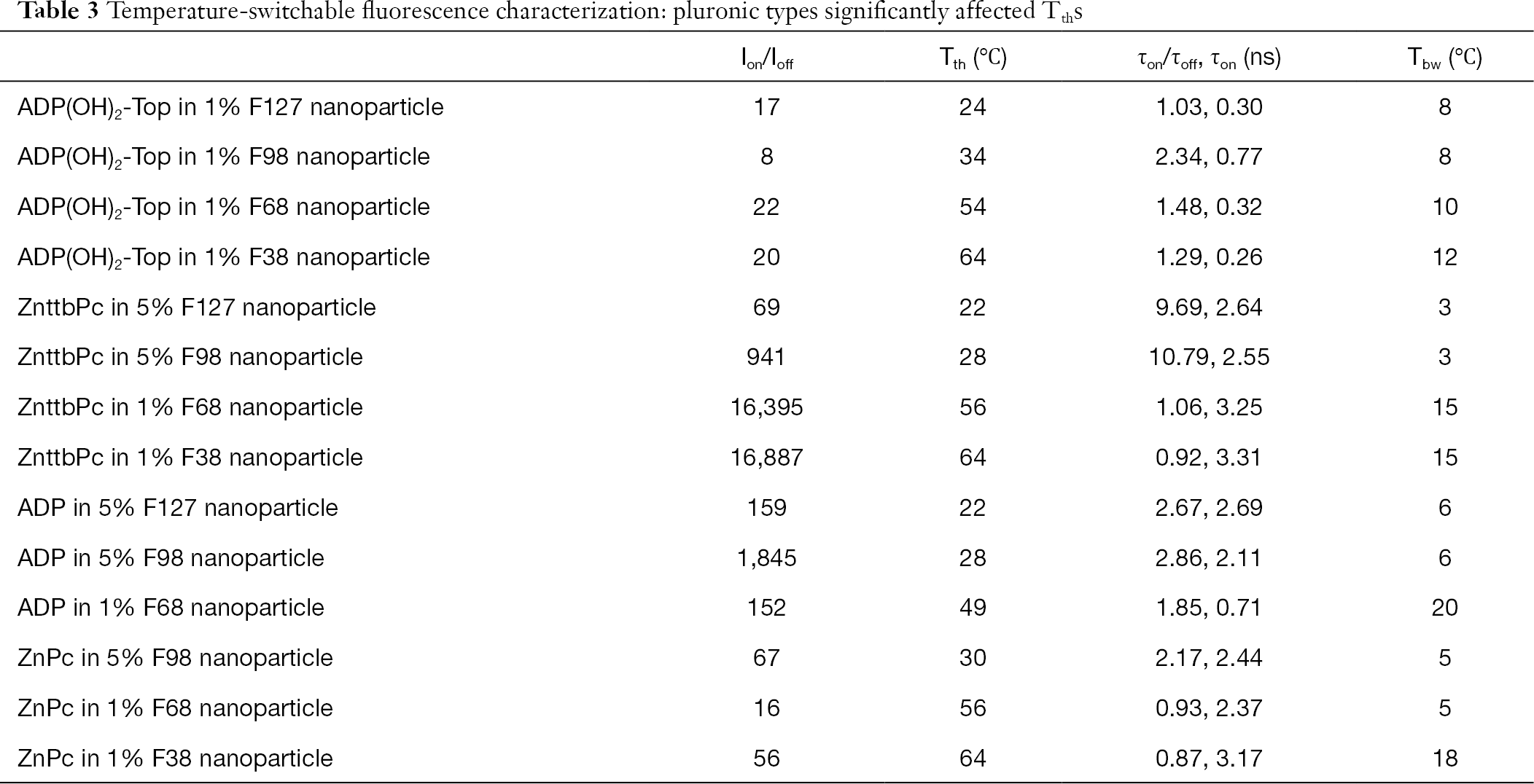 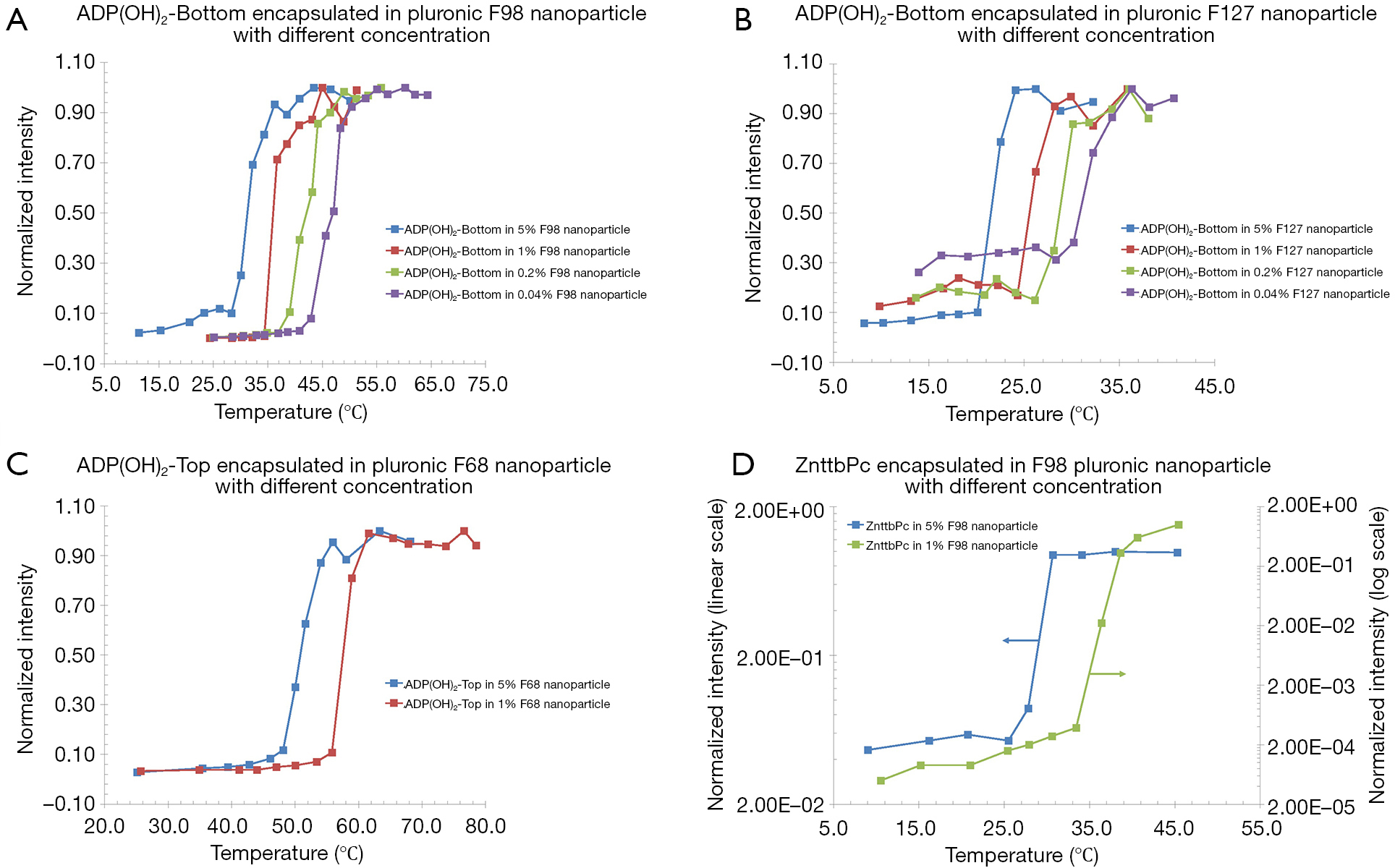 Observation of different temperature-switching thresholds of nanoparticles under a camera

The nanoparticles are appropriate for ultrasound-switchable fluorescence (USF) imaging

Some pluronic nanoparticles have been selected and adopted as USF contrast agents in our previous work (8,15-17). They have several advantages in USF imaging. First, the fluorophores (i.e., ADP or ZnPC series) are NIR dyes so their fluorescence can penetrate deeper biological tissue compared with light with visible wavelengths. Second, compared with other USF contrast agents, many nanoparticles (i.e., ADP in 5% F98 nanoparticle) show a high Ion/Ioff, which helps quench the background fluorescence to reduce background noise and further improve signal-to-noise ratio (SNR) in USF image. Third, some nanoparticles (i.e., ZnttbPc in 5% F98 nanoparticle) also showed a high τon/τoff. A high τon/τoff could help increase the SNR of a USF image when using a time-domain USF imaging system (20). In conclusion, the nanoparticles have excellent thermal-switchable properties and are appropriate contrast agents for USF imaging.

The nanoparticles are appropriate for temperature sensing

Thanks for Dr. Kytai Nguyen and Dr. Yi Hong for allowing us to use some equipment in their labs to synthesize and characterize contrast agents. Thanks for Dr. Francis D’Souza for providing the ADP series fluorophores.

Funding: This work was supported in part by funding from Cancer Prevention & Research Institute of Texas (CPRIT) RP170564 (Baohong Yuan).

Provenance and Peer Review: With the arrangement by the Guest Editors and the editorial office, this article has been reviewed by external peers.