Sarcopenia is considered as a progressive and generalized musculoskeletal disorder associated with impaired muscle quality and muscular performance increasing the risk of fracture, disability and mortality according to a recent consensus paper on modified taxonomic recommendations (1-3). Analogously to the described entity, cachexia is a severe, adverse side effect of advanced oncological diseases accompanied by elevated general catabolic activity, muscle wasting and overall therapeutic outcome (4-6). To detect the onset of cachexia in a clinical setting and reduce or delay the aggravating and life quality limiting side effects, the merit of several diagnostic modalities was evaluated in previous studies (7,8). The described catabolic alterations in these disease entities require precise diagnostic assessment of pathophysiological changes in muscle composition and morphology for subsequent implementation in clinical diagnostics (9).

There are established imaging methods to assess muscle mass and composition including dual energy X-ray absorptiometry (DXA) and computed tomography (CT) (10). Single-voxel proton magnetic resonance spectroscopy (MRS) and chemical shift encoding-based water-fat magnetic resonance imaging (MRI) are gaining importance in preclinical and clinical settings. They enable the investigator to extract surrogate parameters of the muscle composition like the proton density fat fraction (PDFF) and even for the identification of the chemical structure of fatty acids and their magnitude with high congruence to histology (11). In previous studies, Azzabou et al. and Barnouin et al. already described water-fat separation imaging based on a 3-point Dixon technique to reliably quantify intramuscular fat compositions in the quadriceps femoris using manual segmentation methods (12,13).

In the past a vast amount of literature has been published on water-fat MRI studying the muscle composition of major muscle groups like the paraspinal or thigh musculature in healthy adults (12-18). These studies showed that the thigh and the paraspinal musculature morphology, i.e., their muscular fatty infiltration and their cross-sectional area (CSA) is individually susceptible to age and additionally but also varying with different anatomic locations (12,14,16).

In a clinical setting the normative studies conducted investigating fat distribution patterns in healthy collectives can provide physiological benchmark values with regard to improve early diagnostics catabolic diseases like sarcopenia or cachexia. However, as one major confounding factor limiting the benefit of quantitative MRI in displaying muscular fatty infiltration in a clinical setting age has to be kept in mind. Against this background Dahlqvist et al. and Crawford et al. amongst others already showed the strong association of senescent, healthy adults and muscle loss (15,16).

It would be of interest to elucidate the association of large muscle groups’ composition, e.g., the thigh and paraspinal musculature, as they comprise the major muscle compartments of the body and are of relevance in musculoskeletal disorders. A homo- or heterogenous muscle composition across different muscle groups affects the choice where to measure the muscle composition and disease status best. Furthermore, it will give us more insights into the muscle (patho-)physiology.

Therefore, this study investigated the fat distribution patterns of the psoas, erector spinae, quadriceps femoris and hamstring muscle groups and their association to each other using chemical shift encoding-based water-fat MRI in adult volunteers.

Thirty Caucasian volunteers with self-reported clean medical history (male =15, female =15) were recruited for this study. A body mass index (BMI) between 20 and 33 kg/m2 and an age between 20 and 40 years were defined as inclusion criteria to obtain rather broad BMI and age ranges. All subjects were right-footed. Exclusion criteria were history of metabolic disorders, spine or thigh trauma, and MRI contraindications. 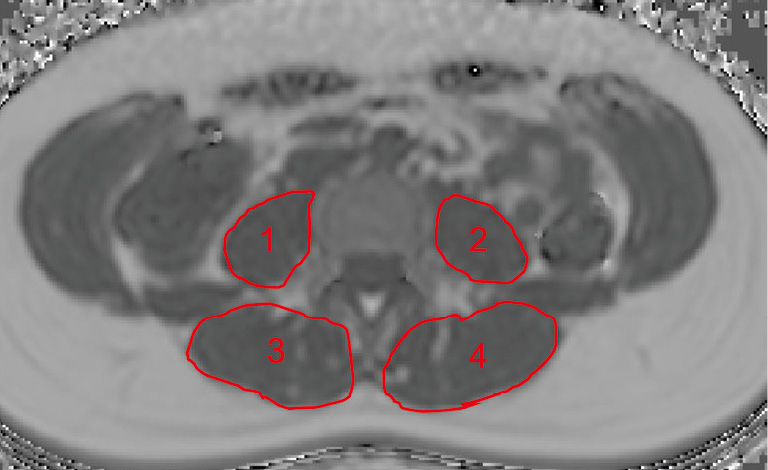 Figure 1 Representative segmentation of the right [1] and left [2] psoas muscle and the right [3] and left [4] erector spinae muscle.

At the thigh, we firstly identified the cranial surface of the greater trochanter and caudal surface of femur condyles in each thigh. These were used as anatomical landmarks to define the most central slice of each thigh in the axial images. Then, both sides of the quadriceps femoris and the hamstring muscle groups were segmented manually in the 10 most central slices depicting the outer muscle contour of each muscle group (Figure 2). Segmentation time per subject amounted 15 min. CSA (mm3) and PDFF (in %) were extracted and averaged over the right and left side. On basis of the extracted PDFF and CSA values the contractile mass index (CMI) was calculated as follows: CMI = CSA × (1 − PDFF) (9).

Figure 2 Representative segmentation of the thigh muscles: right [1] and left [2] quadriceps femoris muscle and the right [3] and left [4] hamstring musculature.

The Kolmogorov–Smirnov test indicated not normally distributed data. Differences in age, BMI, CSA, CMI, and PDFF of all muscles between male and female subjects were assessed with the Wilcoxon-Mann-Whitney-test. Correlations between PDFF and CMI of the different muscle groups were determined by using the Spearman correlation coefficient r. 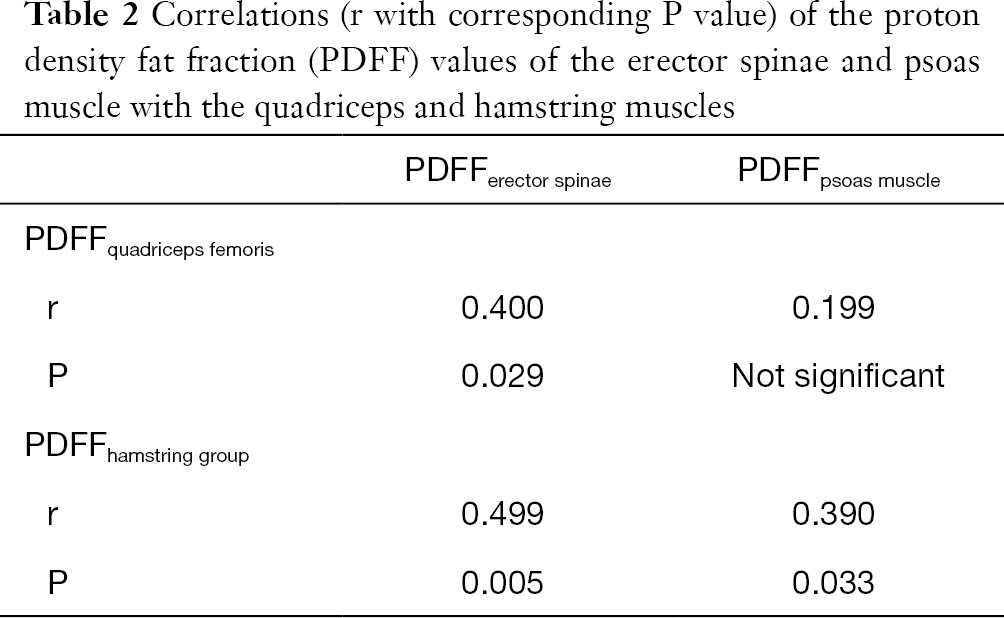 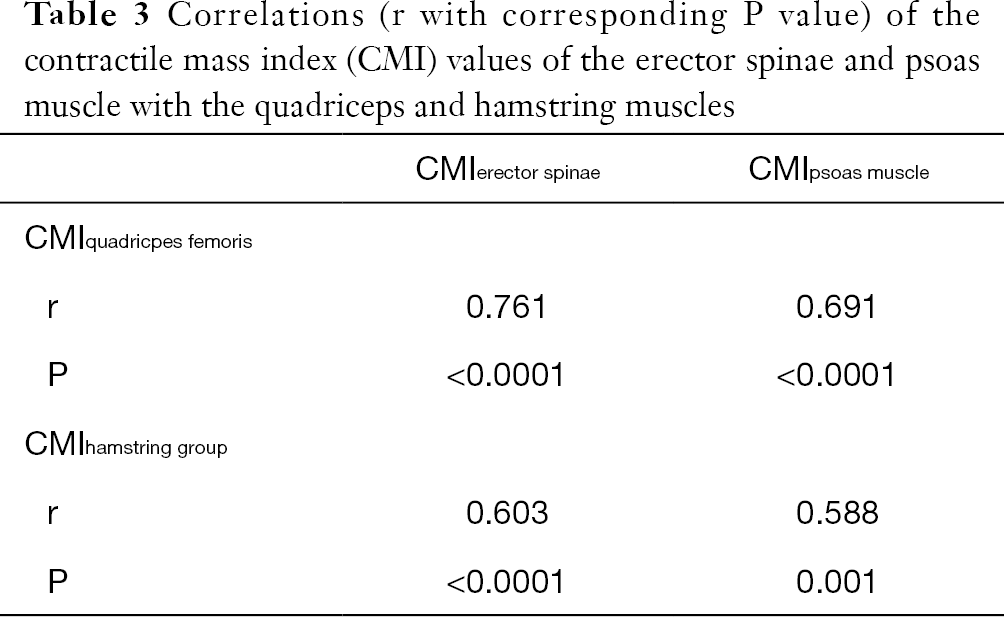 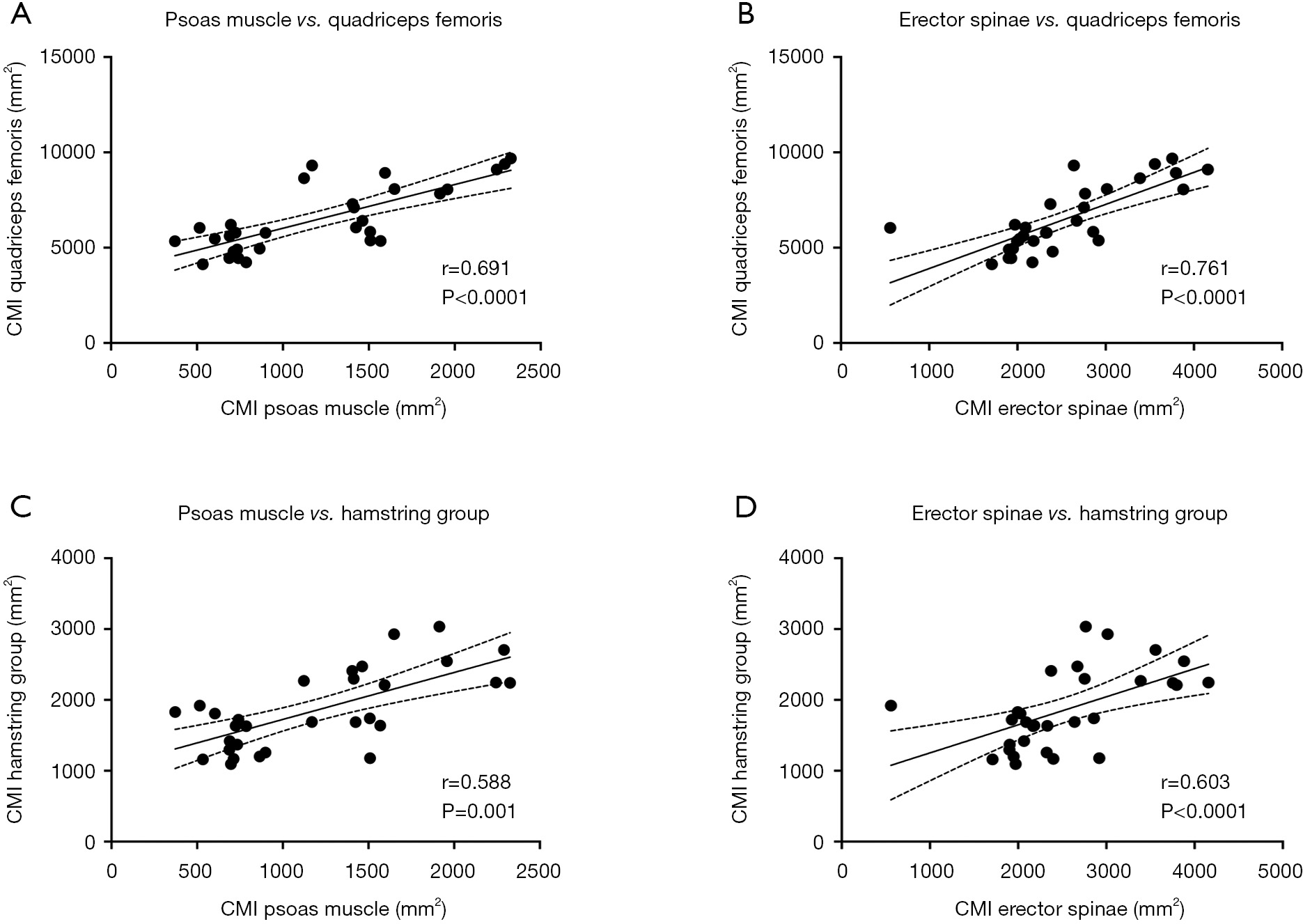 Figure 6 This figure plots the contractile mass index (CMI) of the psoas muscle against the quadriceps muscle (A) and the hamstring muscle group (B). Furthermore, the CMI of the erector spinae is plotted against the quadriceps muscle (C) and the hamstring femoris muscle group (D). The areas between the dotted lines represent the 95% confidence band of the best-fit line.

Previous studies showed that characteristic structural and compositional peculiarities exist for different muscle groups depending on their function and topography. These macroscopic and microscopic structural patterns are dependent on intra- and interindividual specifications like anatomic location, age and BMI (20,22-24). In contrast to the abundance of data on the physiology and pathology of musculoskeletal motion segments of the vertebral column there is a scarcity of information on thigh muscle composition (25-29). There are only few studies analyzing thigh muscle composition with state-of-the-art techniques like water-fat MRI. In the past several approaches towards muscle quality assessment using CT and T2 based MRI have been conducted allowing for extraction of CSA values and estimates for muscle fat fraction (8,18).

A cross-sectional study by Kumar et al. revealed significant correlations between the degree of intramuscular fat accumulation in the quadriceps femoris verified by water-fat MRI and the presence and severity of knee osteoarthritis confirmed by conventional radiography and functional isokinetic strength measures (30). Furthermore, Grimm et al. showed that extracting PDFF values from MRS in semitendinosus muscle provides valid and reproducible surrogate parameters for muscle quality allowing for quantification of the tissue alterations and damage due to aging or muscular diseases (31).

Even if the correlations of the PDFF distribution patterns have to be considered rather weak, our findings point to resembling fatty infiltration mechanisms in the flexors and extensors of the thigh and the erector spinae muscle in this young cohort of subject with a representative BMI. A potential reason for the weak significance may be the relatively small sample size (n=30). Keeping this drawback in mind it still can be concluded that the presented results indicate a rather homogenous muscle composition across paraspinal and thigh muscle groups except for the psoas muscle. The methodical reproducibility of the acquired sequence protocol was validated in previous studies on the thigh and paraspinal musculature (20,32).

When interpreting the results of the present study there are certain limitations, which are elucidated in the following. First, the relatively small cohort size with a narrow age range limits this study with regard to aging. Additionally, the average BMI values of the subjects included in this study are considered overweight according to the World Health Organization (WHO). However, it has to be kept in mind that current estimates conducted by the WHO state that, e.g., 65% of US adults are overweight to obese (33). Thus, the presented cohort can be considered representative regarding these global changes. In future studies, an analogously balanced but extended cohort with senescent subjects would be reasonable. Second, the cross-sectional study design does not allow for evaluation of temporal and intraindividual dynamics.

In the present study, strong statistically significant correlations for CMI values of the erector spinae as well as the psoas muscle with the quadriceps and hamstring musculature could be revealed. Furthermore, the PDFF values for the erector spinae and both thigh muscle groups showed a comparable distribution range. The presented findings may indicate a certain association in regard of fatty infiltration patterns of these muscle groups. The concordant spatial fat accumulation within the analyzed muscles suggest the potential suitability as biomarkers in holistic muscle assessment approaches.

Funding: The present work received funding by the European Research Council (grant agreement No 677661 – ProFatMRI and grant agreement No 637164 – iBack), TUM Faculty of Medicine KKF grant H01, the German Research Foundation (DFG-SFB824/A9) and Philips Healthcare. Additionally, this work was supported by the German Research Foundation (DFG) and the Technical University of Munich (TUM) in the framework of the Open Access Publishing Program.

Ethical Statement: This study was approved by the Institutional Review Board and was conducted in accordance with the Declaration of Helsinki. Written informed consent was obtained from all study participants.