An atypical presentation of frontotemporal dementia

Frontotemporal dementia (FTD) is a group of neurodegenerative conditions affecting the frontal and temporal lobes (1). FTD is the fourth overall most prevalent dementia subtype accounting for <5% of cases, rising to approximately 10% in the ‘early onset’ (under 65) cohort (2).

FTD encompasses three overlapping clinical syndromes consisting of predominantly behavioural and executive function deficits (behavioural variant), or language deficits further categorised into semantic or non-fluent primary progressive aphasia (1,3). Behavioural variant FTD (bvFTD) in the early stages typically manifests with personality change, disinhibition and social inappropriateness (1). Further, mood disturbance, compulsive behaviour and hyperphagia are also commonly observed. For this reason, adult-onset psychiatric disease can easily be misdiagnosed, not conducive to the effective management of the condition (4). Other dementia subtypes can demonstrate clinical and neuropathological overlap with FTD, although a predominance of cognitive rather than behavioural dysfunction with neuropathology extending globally beyond the frontal and temporal lobes is often observed (5).

Correct early diagnosis of FTD and mobilisation of support services is vital for optimising management, yet this is not often the case in reality. Diagnosis is multidisciplinary in nature, with collateral history, cognitive assessment and neuro imaging all integral to the diagnostic process (1,3). Here, we describe a diagnostically atypical case of FTD, initially presenting following an acute hyponatraemia secondary to primary polydipsia (PP).

A 66-year-old, right handed and trilingual Caucasian lady presented to hospital with a first episode of seizure. Upon admission she was found to be hyponatraemic with a plasma sodium of 108 mmol/L and had sustained fractures to C2–C5 spinous processes which were managed conservatively. Her profound agitation and confusion necessitated 7 days of intensive care unit (ICU) admission with intubation to facilitate correction of hyponatraemia and enable further investigation. Following investigation (Table 1), PP was deemed causative of her hyponatraemia, and a perseverative desire to drink water persisted alongside clear cognitive impairment despite normalisation of serum sodium. Her routine blood tests were within normal ranges, excluding a vitamin B12 deficiency that was corrected. Autoimmune and infective encephalitis were excluded, and cerebral spinal fluid showed no evidence of infection. Magnetic resonance imaging (MRI) of the brain was reviewed by the neurology multidisciplinary team, including specialist neuroradiologists, who identified global cerebral atrophy with disproportionate involvement of the medial temporal, and frontal lobes; hippocampal atrophy was asymmetrical (Figure 1). 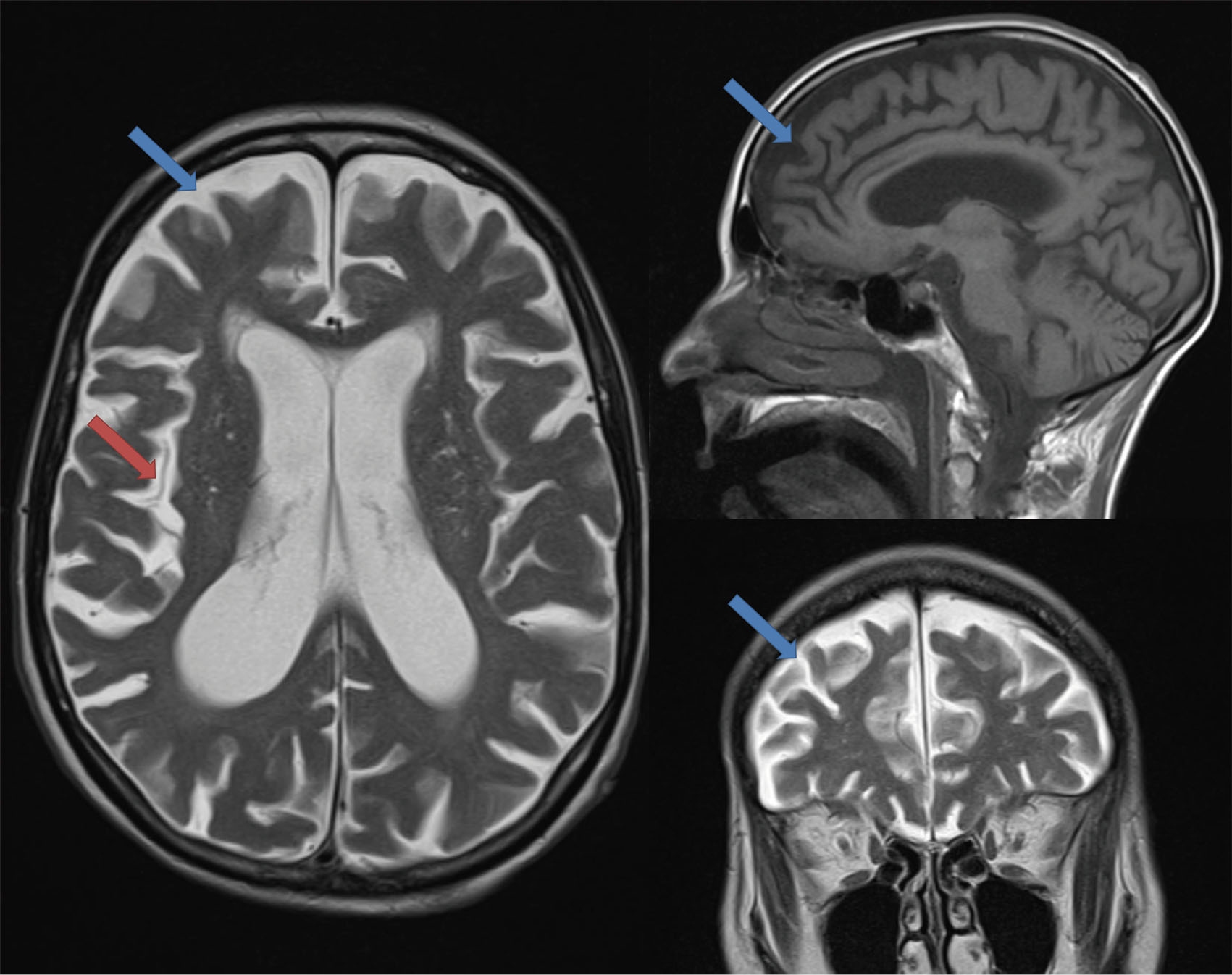 Post ICU admission, impairment of episodic memory continued, with mild fluent aphasia and compromised executive function. She also exhibited behavioural and psychological symptoms of dementia (BPSD) including agitation, aggression, wandering, and visual hallucination. She displayed hyperphagic predilection for sugary foods and 1:1 supervision was required to enforce fluid restriction; preventing relapse of water intoxication. Her original diagnosis made by a Psychiatrist was Alzheimer dementia (AD). Both donepezil and memantine were trialled but neither provided symptomatic benefit and were actually found to exacerbate symptoms.

At the multidisciplinary memory clinic, she was reviewed by a Geriatrician and Neurologist. Her family mentioned they had sought medical advice for her episodic memory decline approximately 4 years previously, resulting in a diagnosis of anxiety and alcohol related cognitive impairment without further specialist input. Her cognitive decline accelerated 6 months prior to her hospital admission; she began wandering, and developed a compulsion to drink water, consuming up to 15 L per day. Neuropsychometric testing revealed severe frontal lobe dysfunction (Table 2), and she showed signs of disinhibition and repetitive compulsive behaviour. By combining the comprehensive history, neuropsychometric testing and specialist review of neuroimaging, a diagnosis of probable bvFTD was made in accordance with the international consensus criteria for bvFTD (9). Positron emission tomography (PET) scanning was considered for this patient, but in consideration of family members’ wishes the team decided it would not be tolerated well and would thus not be in her best interests. Following diagnosis, memantine was stopped and trazodone was introduced which reduced her agitation.

In humans, bvFTD is predominated by perseverative behavioural abnormalities, with hyperphagia a highly specific symptom (1,10). The initially insidious decline in memory with preservation of executive function observed here was atypical for a case of bvFTD; the aberrant social function and personality change observed later on were much more emblematic of the diagnosis (10). A multidisciplinary approach utilizing a range of specialties and investigations was pivotal in obtaining the most probable diagnosis here, aided by an international diagnostic criteria; definitive diagnosis would only be achieved through post mortem histopathology or demonstration of a pathological genetic mutation (9). There is currently no standard approved pharmacological treatment for FTD. Previous pilots were suggestive of symptomatic benefit with acetylcholinesterase inhibitors as seen in AD, but two randomised control trials failed to show efficacy (11,12), a result observationally reinforced by this case.

The authors are only aware of one other published case of PP in an FTD patient (13); its aetiology remains poorly understood and potentially under diagnosed among chronic psychiatric patients (14). PP is life threatening; failure of the kidneys to excrete excess fluid results in hyponatraemia, which can lead to significant cerebral or visceral oedema and associated somatic or psychiatric symptoms termed ‘water intoxication’ (15). It is especially arduous and resource intensive to manage behaviourally and pharmacological strategies frequently used to manage frontal lobe symptoms such as selective serotonin reuptake inhibitors (SSRI) may exacerbate the ensuing hyponatraemia (13).

FTD remains a challenging condition to manage for both clinicians and caregivers. Distinct management options are available to each dementia subtype, hence early and correct diagnosis is important and enhanced by the multidisciplinary team. Awareness and vigilance for complicating features, such as PP, where possible can minimise premature deterioration of patients’ condition.

We would like to thank the patient and family discussed in this report. Written consent was obtained to publish their clinical details and clinical images.

Ethical Statement: Written informed consent for publication of their clinical details and/or clinical images was obtained from the patient and their family.