Integrated imaging of adrenal oncocytoma: a case of diagnostic challenge

Oncocytomas are in most cases benign tumors, usually arising in kidneys as well as thyroid, parathyroid, salivary or pituitary glands (1,2). This kind of tumor is extremely rare in adrenals and it is usually discovered as incidental finding because is nonfunctional; however, in about 20% of cases features suggestive for malignancy and/or adrenal hypersecretion have been reported (3). Tumor size criterion often allows to differentiate a benign from a malignant adrenal mass, but in oncocytic neoplasm neither size lesion nor imaging findings are useful for this purpose; indeed, usually oncocytomas present as large adrenal masses and surgical excision is often required (4,5). Therefore, a careful diagnostic evaluation is recommended for lesion characterization as well as for the assessment of potential malignancy.

We aimed to describe imaging features of adrenal oncocytoma and to highlight the diagnostic pitfalls that can be encountered in the interpretation of images obtained from different modalities reporting a case of a female patient evaluated in our institution.

A 34-year-old-woman suffering from recurrent cystitis underwent an abdominopelvic ultrasound. As incidental finding, a lobulated solid adrenal mass (47 mm × 30 mm) was detected. The patient underwent laboratory evaluation of adrenal function and no abnormal cortical and/or medullary hormonal values were detected (Table 1). DECT (tube voltages of 150 and 100 kVp) acquired before and after iodinate contrast medium administration was performed showing a solid nodular patchy mass of the right adrenal gland (39 mm × 24 mm × 40 mm) with inner septa, pre-contrast attenuation coefficients suggestive of solid tissue (40 HU) and a fat fraction of 15.5%. The lesion had an irregular vascularization due to the presence of hemorrhagic foci, showed a rapid outflow of contrast medium after 10 minutes with an Absolute Wash-out rate (AWO10) of 43%, and a Iodine density of 3.0 mg/mL (57%). Moreover, a decrease of attenuation coefficients was observed between low (115 HU) and high (67 HU) energies in the portal phase. The mass was not separated from the liver parenchyma, inferior cava vein and superior pole of right kidney (Figure 1). To further characterize the adrenal lesion, a contrast-enhanced magnetic resonance imaging (MRI) examination was performed, showing: (I) absence of intracellular fat on in & out-of-phase images; (II) hypointense hemorrhagic components on T2-weighted images; (III) significant restriction on DWI; (IV) and increased contrast enhancement on dynamic sequences with an AWO10 rate 37.7% (Figures 2,3). Finally, a 2-(18F)FDG PET/CT scan was performed to assess the metabolic activity of the lesion, showing high (SUVmax =26.4) tracer uptake within the nodule (Figure 4). On the basis of DECT, 2-(18F)FDG PET/CT and MRI features a malignant nature of the lesion was suggested. The patient underwent surgical excision of the right adrenal nodule; however, histology demonstrated a benign cortical adrenal oncocytoma (Figure 5). 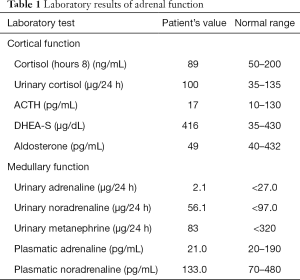 Figure 3 Diffusion-weighted imaging (DWI) MRI; DWI (A) and apparent diffusion coefficient (ADC) map (B): a significant restricted diffusivity of the adrenal mass (white arrow in A and black arrow in B) is detected (ADC value =1.1). MRI, magnetic resonance imaging. 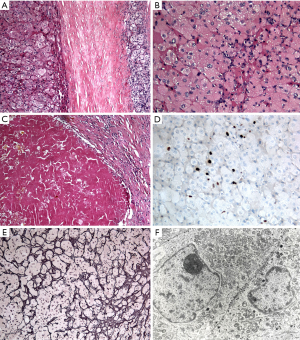 We report a case of an adrenal oncocytoma in which a significant increase of 2-(18F)FDG uptake was observed. DECT, MRI and 2-(18F)FDG PET/CT features were also suggestive for malignancy, but histology after surgical excision demonstrated a benign nature.

Adrenal oncocytoma is a very rare disease, observed within the adrenal cortex and frequently encountered in female patients. Up to 70% of oncocytomas are non-functional and the majority is incidentally detected (2). In a minority of cases these tumors may be symptomatic due to adrenal hypersecretion. The histological characteristic of oncocytoma is the predominance of oncocytes, that are epithelial cells characterized by abundant granular eosinophilic cytoplasm packed with plentiful mitochondria. Some tumors display areas of hemorrhage and necrosis, while the classic central radiating scar that has been described in most renal oncocytomas is not always present in adrenocortical oncocytoma (3).

Imaging characterization of adrenal tumors is based on CT and MRI criteria consisting of tumor size, morphological features, pre- and post-contrast CT densitometry as well as MRI pre-and post-contrast signal intensity characteristics (4). When CT and/or MRI images are uncertain for tumor characterization, functional radionuclide modalities may be used with 2-(18F)FDG PET/CT or PET-MRI hybrid imaging (6). According to the current literature in which tumor size is considered less sensitive than imaging features in predicting malignancy, in our case a significantly high maximum diameter (4 cm) was observed in a benign lesion (5). CT and MRI features were also suggestive for malignancy. Indeed, pre-contrast CT densitometry was 40 HU and post-contrast CT scan demonstrated a solid lesion with an indeterminate wash-out rate of 43%, inferior to thresholds commonly reported in the literature for the diagnosis of adenoma, the most common benign adrenal lesions (7). Furthermore, the lesion showed a significant decrease of attenuation coefficients at 150 kVp as compared to 100 kVp, a fat fraction of 15.5% and an iodine density of 3.0 mg/mL, features that have been previously observed in adrenal metastases (8). In this setting, in a previous study conducted by Martin and colleagues on adrenal adenomas and metastases using DECT, adrenal adenomas demonstrated a significantly higher fat fraction (34.2%) and lower iodine density as compared to metastases (34.2% vs. 10.7% and 1.35 vs. 3.2 mg/mL respectively) (9). As also previously suggested, when CT and MRI findings fail to differentiate an adrenal oncocytoma from adrenal malignant one, 2-(18F)FDG PET/CT may be helpful to differentiate benign from malignant non-functioning adrenal masses. However, this imaging technique could be misleading in cases of adrenal oncocytomas since increased 2-(18F)FDG uptake may occur (6-16). These peculiar findings of adrenal oncocytoma could be probably explained by the different cellularity (related to the absence of intracellular fat), and the high metabolic activity (probably underpinning a greater blood supply) of oncocytomas as compared to adenomas, similar to those of malignant lesions. Similarly, MRI features consisted of absence of intracellular lipid, presence of hemorrhagic foci, significant restriction on DWI and post-contrast dynamic characteristics with indeterminate wash-out rate (10).

The adrenal oncocytoma we described in our case showed similar characteristics as compared to those previously reported in literature in last ten years such as higher frequency in female, fortuitous findings, large lesion size and high 2-(18F)FDG uptake (13-15). A false positive finding of metaiodobenzylguanidine scintigraphy has been also described in such lesions (17). In addition to previous studies, we also reported DECT imaging features of adrenal oncocytomas in terms of CT densitometry and fat fraction that also failed to properly characterize the lesion.

Since the imaging characterization of adrenal oncocytoma effectively represents a diagnostic challenge, the definitive diagnosis of adrenal oncocytoma could be pre-operatively secured by fine-needle aspiration cytology and/or biopsy (18). Adrenalectomy is the treatment of choice, but the prognosis depends on immunohistochemical classification system that classifies adrenal oncocytoma on the basis of the risk of recurrence, metastasis, and death (2,7,19).

In conclusion, imaging findings alone, even with the addition of more advanced imaging techniques, are not able to characterize adrenal oncocytoma. Morpho-functional integrated imaging is recommended to characterize adrenal tumors, but since 2-(18F)FDG uptake may often occur in adrenal oncocytoma, malignancy may be overestimated. Therefore, this peculiar finding should be taken into account for appropriate imaging interpretation of incidental adrenal lesions, especially when encountered in young females.