Aortic stenosis (AS) is the most frequent native valvular heart disease and typically presents as calcified degeneration in adults of advanced age (affecting 2–7% of those aged over 65 years) (1). Current guidelines recommend aortic valve replacement (AVR) with the onset of symptoms (angina, exertional dyspnoea, syncope) or cardiac dysfunction [left ventricular ejection fraction (LVEF) <50%] as class I indications (2).

Calcific AS is associated with a long latent phase without symptoms, which varies widely in duration between individuals (3-6). In this asymptomatic group, 2-year event-free survival ranges from 20% to more than 50% (6). However, the onset of symptoms marks a bleak prognosis (7). Given the lack of a direct relation between hemodynamic severity and clinical outcome, guidelines indicate careful history taking at each visit as critical to proper patient management (7). However, symptom onset can be insidious and patients’ reports are often ambiguous as they subconsciously reduce their activities or incorrectly ascribe a decline to other causes (8).

Left ventricular hypertrophy occurs in AS reflecting compensation for increased mid-wall stress from chronic pressure overload (9). Eventually an afterload mismatch impairs LV performance despite preservation of ejection fraction (10). Indeed, impaired LVEF represents an end stage of AS with worse outcomes even in those who receive corrective treatment (11).

Assessment of myocardial deformation parameters provides superior quantification of systolic function, with increased sensitivity to subtle myocardial dysfunction than global LVEF (12) and holds prognostic value in patients with AS (13) even when asymptomatic (14). Cardiovascular magnetic resonance (CMR) tagging is accepted by many as the gold standard for measurement of circumferential and longitudinal myocardial strain (15,16) and has good demonstrated reproducibility (17).

The aim of this study was to objectively define LV systolic and diastolic function, using CMR strain quantification, across a spectrum of symptom profiles in patients with severe AS and to determine whether strain assessment could potentially contribute to the decision-making process, particularly in patients with preserved LVEF and equivocal symptoms.

Forty two patients with severe degenerative AS were prospectively recruited between July 2008 and December 2013 from the University Hospitals of Leeds and Leicester, UK. Based upon transthoracic echocardiography (TTE), severe AS was defined as an aortic valve area (AVA) of ≤1.0 cm2 or peak velocity >4 m/s. Clinical evaluation comprised the elucidation of symptoms (NYHA functional class, angina, syncope) and physical examination. Demographic data and risk factors for cardiovascular were also documented. Patients were then grouped into those reporting “no/mild” symptoms (NYHA class I, II) and those reporting “significant” symptoms (NYHA class III, IV, angina, syncope). We also enrolled 13 age-matched healthy volunteers who underwent an identical CMR protocol. Exclusion criteria included any patients with more than mild aortic regurgitation, any contraindication to CMR, and for the healthy volunteers, symptoms or history of heart disease, abnormal resting blood pressure or diabetes mellitus. The study was approved by a national ethics committee, complied with the Declaration of Helsinki and written informed consent was provided by participants.

CSPAMM analysis was performed using a dedicated tagging analysis package (inTag© software, Creatis, Lyon, France). Epicardial and endocardial contours were drawn for each slice. A mid-myocardial contour was automatically calculated and contours were propagated through all cardiac phases. Strain was measured in the mid-myocardial layer which has previously been reported to be the most reproducible (17). Peak circumferential LV strain was measured for the three slices at apex, mid-ventricle, and base. Peak systolic and diastolic LV strain rates were measured from the mid-ventricular slice. 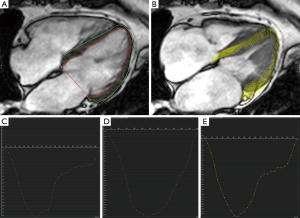 Figure 1 Feature tracking analysis demonstrating measurement of peak longitudinal strain (PLS) derived from LV contours in diastole (A) tracked through to systole (B); generating strain curves in a healthy control (C, PLS =−21), a patient with “no / mild” symptoms (D, PLS =−18) and a patient with “significant” symptoms (E, PLS =−16).

A total of 42 patients with severe AS were studied along with 13 healthy controls, matched for age, LVEF and body mass index (BMI) (Table 1). The patients with severe AS were further subdivided into two groups; those with “no/mild” symptoms (n=21), and those with “significant” symptoms (n=21). These two groups were comparable for age, surgical risk score, LV mass, measures of AS severity and history of ischaemic heart disease (Table 2). Across all three individual groups, average LVEF was above 50% (the defined cut-off for a class I indication for surgical valve replacement). 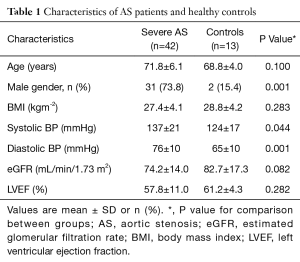 Table 1 Characteristics of AS patients and healthy controls
Full table 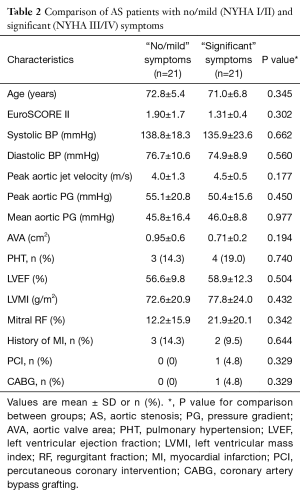 Comparison of healthy controls and severe AS 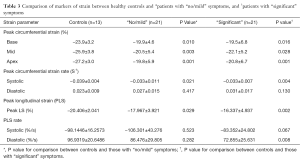 Table 3 Comparison of markers of strain between healthy controls and *patients with “no/mild” symptoms, and †patients with “significant” symptoms
Full table

Comparison of severe AS patients reporting “no/mild” and “significant” symptoms 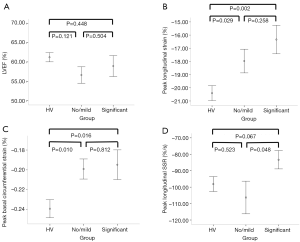 This prospective two-centre study has comprehensively characterised LV mechanics using CMR in patients with severe AS and in healthy age-matched controls. Patients with severe AS exhibit diminished longitudinal and circumferential LV strain when compared to controls, despite preservation in LVEF. Importantly, we have demonstrated patients with severe AS and no or only minimal symptoms still exhibit LV systolic dysfunction that is comparable to those with significant symptoms who fulfil a class I indication for aortic valve surgery. CMR strain analysis may therefore have a future role in clarifying patient selection for AVR, particularly when symptoms are equivocal, given the ability to detect LV functional decline in the AS disease process more sensitively than global LV ejection fraction.

Valvular AS is a slowly progressive disease and symptom onset can be insidious. However, in patients with preserved systolic function, it is the significance of symptoms that clinically determines referral for surgery. In the Euro Heart Survey, 24% of patients with severe AS presented with congestive heart failure and the use of medical therapy was frequent. These observations suggest a sizeable group of patients with severe AS were managed at an advanced stage of their disease process (16). Mild symptoms are often denied or erroneously dismissed to advancing age or an intercurrent illness (8) which may potentially reduce their survival. The Euro Heart Survey reflects real world practise in which equivocal symptom reporting in the context of high risk aortic valve surgery is frequently managed conservatively.

The origin of exercise intolerance or symptoms in patients with severe AS is poorly understood (19) and there is considerable variation in the degree of stenosis associated with symptom onset. In our study, patients with no/mild and significant symptoms were comparable in age, LVEF, LV mass, mitral regurgitation, presence of pulmonary hypertension (PHT), history of coronary disease and aortic valve haemodynamics. It is notable LVEF is normal in most patients with severe AS, even when symptoms develop and that valve area and transvalvular gradients do not predict clinical outcomes following AVR (20). It can be challenging to clinicians to decipher a genuine change in symptoms attributable to AS. Similar to previous studies (19,21), our work highlights the need for novel objective measures of early LV decline that could guide a clinician to offering timely intervention.

This is the first study to use CMR strain analysis to attempt to differentiate patients with severe AS based on their symptomatic state. Our data suggests that those with significant symptoms (and thus clear surgical indication) have statistically worse peak longitudinal systolic strain rates than those with no/mild symptoms (in whom decision making can be challenging), despite other comparable measures of LV function by strain. Strain rate represents the rate of myocardial deformation and is an energy-requiring process (22). Compared with strain, it is less dependent upon pre-load, afterload and heart rate; and is representative of regional contractile function (23). Nonetheless, caution is required in interpreting this finding given the sample sizes, and larger study is required to clarify this reported depreciation of strain rate and its potential impact on clinical surveillance.

Our study using CMR confirms severe valvular AS confers a chronic pressure overload that is detrimental to myocardial fibre function. This subtle detection of both systolic and diastolic LV dysfunction even in those with no or mild symptoms may explain previous findings that early elective AVR in asymptomatic patients affords beneficial early and late outcomes (26,27). It is noteworthy that delayed surgical treatment is the principal determinant of reduced late survival (27). Our observation of comparable impairment between those with significant symptoms, in whom AVR is clearly indicated, and those with no/mild symptoms suggests referral for surgery based on assessment of LV mechanics (and thus earlier than current guidelines would recommend) could avert a delay of prognostic importance. Indeed, our observation is noteworthy in light of recent data. In a sizeable multicentre registry comprising 3,815 patients, conservative management of asymptomatic severe AS patients was associated with a dismally higher incidence of mortality and hospital admission at 5 years when compared with an initial AVR approach (28). It is entirely possible the poor outcomes in these reportedly “asymptomatic” patients related to advanced subclinical LV dysfunction comparable to those with symptoms who would ordinarily have been intervened upon earlier.

A number of studies indicate the clinical importance of longitudinal strain measurement in patients with severe AS. It has the potential to predict recovery of LV dysfunction following surgery (9), the requirement for AVR in the future (29) and also independently predict all-cause mortality (30). Recently, deteriorating LV global longitudinal strain has also demonstrated incremental prognostic value in addition to symptom profile and surgical risk scoring; being superior to measures of aortic pressure gradient (PG) and stroke volume (13). Our study reflects this observation; demonstrating both longitudinal and circumferential strains are sensitive in detecting pathology before they are evident on conventional history taking. Given our observation of similar longitudinal strain between those with no/mild symptoms and those with significant symptoms, our study indicates the need to measure longitudinal strain in patients with ill-defined symptoms to determine whether they potentially fall into the same prognostic group as those with a manifest requirement for AVR.

This was an observational study and associations do not prove causality. Our study population was relatively small and included patients with coronary artery disease and hypertension, rather than being restricted to isolated AS. This is however generalizable to real world clinical practice and reduces the effect of selection bias. Given the potential for type I statistical errors, our findings should be validated in a larger patient population to confirm any future clinical utility. We have used feature tracking, rather than CSPAMM, for the analysis of longitudinal strain. Tissue tagging is hampered by a lower temporal resolution and tag fading during diastole and feature tracking to determine longitudinal strain has demonstrated good reproducibility in patients with severe AS (31). Thresholds for normal versus pathological strain and strain rates may vary with different analysis software and pulse sequence acquisitions; thus our absolute values may not be translatable to other acquisition/analysis platforms.

In conclusion, LV deformation assessment using CMR offers a potentially valuable non-invasive assessment of patients with severe AS, more sensitive than the elucidation of symptoms at detecting a decline in LV performance. Patients with no or only mild symptoms exhibit comparable reduction in circumferential and longitudinal fibre function to those with significant symptoms in whom AVR is clearly indicated. Thus, CMR characterisation of LV strain may guide optimal decision making when caring for asymptomatic patients or those with borderline symptoms. Future larger prospective studies are needed to validate this interesting observation.

Ethical Statement: The study was approved by a national ethics committee (REC 08/H1307/106), complied with the Declaration of Helsinki and written informed consent was provided by participants.