Connective tissue disease (CTD) is a group of heterogeneous immune-mediated systemic diseases that can affect various organs and systems. Interstitial lung disease (ILD) is one of the pulmonary manifestations of CTD and can cause significant morbidity and mortality (1,2). Lung ultrasound (LUS) has been widely used to diagnose various lung diseases (3-7). The diagnostic value of LUS in CTD-ILD has been reported worldwide (8-11). However, there is no standard scanning method or scoring method, rendering it necessary to establish a set of standard evaluation methods.

Barskova et al. (12) showed that the B-line could appear in the early stage of the disease, and that it had a high sensitivity for the diagnosis of ILD and can be used as a screening tool for ILD. Wang et al. (13) found that the B-line score was valuable in diagnosing CTD-ILD and correlated well with the high-resolution computed tomography (HRCT) score. Autopsy studies have shown that up to 70% of rheumatoid arthritis (RA) patients have at least slight pleural changes, which are the signs of lung involvement, and 17% of RA patients without dyspnea have signs of ILD (14). Therefore, the evaluation of CTD-ILD should be based on the number of B-lines as well as a comprehensive evaluation of its possible ultrasonic signs. Buda et al. (15) developed a semiquantitative scoring method to comprehensively evaluate the LUS signs that may appear in ILD patients. However, their scoring method had the lowest score in the white lung, which was not consistent with the idea that the white lung was the most seriously affected. Moreover, the whole lung was only divided into 3 regions: upper, middle, and lower; the scanning scope was not sufficiently refined; and the grade score of the B-line and the pleural line was not adequately detailed. Therefore, existing reports have developed a modified LUS scoring method by referring to the Buda ultrasound scoring method (15) and the HRCT Warrick scoring method (16).

In our previous study (17,18), 28 intercostal spaces (ICS) scan of anterior chest wall, 72 ICS scan of anterior and posterior chest wall and modified 14 ICS scan of anterior and posterior chest wall, which are the most commonly used at home and abroad, were used to examine ILD patients, and the feasibility and diagnostic efficiency of each method were analyzed. Finally, it was found that 72 ICS scan had the best diagnostic performance. We combined this approach with the modified LUS scoring method. Then, we inspected patients with CTD-ILD, analyzed the diagnostic values of the evaluation, and compared those values with the Buda ultrasound scoring method to find a new evaluation scheme for the ultrasonic diagnosis of CTD-ILD. We present the following article in accordance with the STARD reporting checklist (available at https://qims.amegroups.com/article/view/10.21037/qims-22-153/rc).

A total of 60 patients with clinically confirmed CTD and suspected ILD in the Respiratory Department and Immunology Department of the Second Affiliated Hospital of Fujian Medical University from June 2019 to October 2020 were included in the present study. Among the participants, 20 had RA, 19 had systemic lupus erythematosus, 10 had Sjogren’s syndrome, 6 had systemic sclerosis, and 5 had polymyositis. There were 18 males and 42 females, aged 27–89 years, with a quartile of 61.0 (range, 50.0–69.0) years (Table 1). The general inclusion and exclusion processes are shown in Figure 1. The diagnosis of CTD was based on respective international standards (19-25). The diagnosis of ILD followed the 2018 Clinical Guidelines for ILD issued by the American Thoracic Society/European Respiratory Society (ATS/ERS) (26). Patients were included if they had been diagnosed with CTD; had a cough, chest tightness, labored shortness of breath, and other symptoms; and had undergone an HRCT examination. Patients were excluded if they had other lung diseases, such as lung infection, lung tumor, and previous lung surgery; had heart failure, diastolic dysfunction, asthma, pulmonary edema, and other issues caused by interstitial fluid; were unable to cooperate with clinical examination, such as HRCT and ultrasound, had incomplete clinical data; or had poor image quality. All participants underwent HRCT and LUS examinations.

The clinical information of the recruited patients 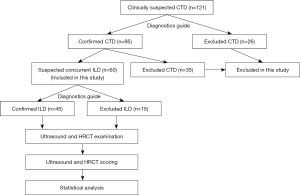 The examinations were performed by 2 sonographers and imaging physicians who had received 3 years of training and had 2 years of experience in pulmonary imaging diagnostic studies. Radiographers used HRCT Warrick scoring. Sonographers used Buda ultrasound scoring and modified ultrasound scoring in a double-blind setting. The study was conducted in accordance with the Declaration of Helsinki (as revised in 2013). The study was approved by the Ethics Committee of the Second Affiliated Hospital of Fujian Medical University (No. 2018-24), and informed consent was provided by all participants.

The tests were carried out using the Voluson E8 system (GE, Chicago, IL, USA) with the use of a linear probe (4.0–13.0 MHz) and a convex probe (1.0–7.0 MHz). The convex probe was used to observe the B-line and chest condition of the lungs. The linear probe was used to observe the pleural line. The anterior, lateral, and posterior chest wall 72 ICS scan method was used to carefully scan and evaluate each participant, including anterior, lateral, and posterior aspects of the chest wall (Figure 2) (27). The whole chest of the patient was scanned by positioning the probe sagittal to the chest wall in the ICS. The probe was moved from medial to lateral, from anterior to posterior along the anatomic reference line, including the bilateral parasternal line, midclavicular line, anterior axillary line, midaxillary line; bilateral spinal paravertebral line, scapula line, and posterior axillary line. Each chest wall point was observed 3 times. Patients were in a supine position to scan the anterior lung area and a sitting position to observe the posterior lung. We appropriately adjusted the grayscale imaging parameters to obtain the maximum contrast between all inspected structures. 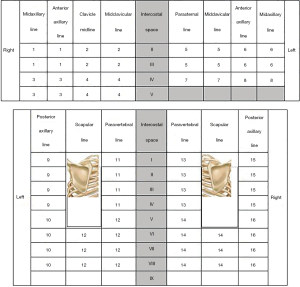 Figure 2 A 72 ICS scan of bilateral anterior, lateral, and posterior chest wall, in which we divided the entire chest into 16 zones as shown. ICS, intercostal space.

The score for each region was the sum of the three scores of the B-line, pleural line and complications, and the score for the entire lung was obtained by adding the scores of sixteen areas (as shown in Figure 1). CTD-ILD, connective tissue disease-associated with interstitial lung disease. 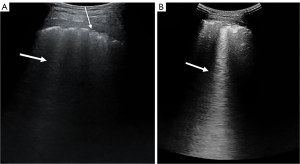 Figure 3 Lung ultrasonogram of CTD-ILD. (A) The thick arrow shows the B-line, and the thin arrow shows the fragmented pleural line. (B) The arrow indicates the Am-line. CTD-ILD, connective tissue disease-associated with interstitial lung disease.

For statistical analysis, we used SPSS 22.0 (IBM Corp., Armonk, NY, USA). Data with a normal distribution were expressed as the mean ± standard deviation (), data with a nonnormal distribution were expressed as the median (interquartile range), and categorical variables were expressed as a count and percentage. Differences in the test variables were compared using the chi-square test. The area under the ROC curve and 95% CI were used to calculate the diagnostic efficiency of CTD-ILD by the modified ultrasound scoring method, Buda ultrasound scoring method, and HRCT Warrick scoring method. The Kappa consistency test was used to evaluate the consistency of the 3 scoring methods in the diagnosis of CTD-ILD. Pearson correlation was used to analyze the correlation between the 3 scoring methods. The Mann-Whitney U test was used to compare differences in test variables between the different groups. The sensitivity, specificity, and optimal cutoff value of the modified ultrasound score method for predicting the severity of CTD-ILD were analyzed using ROC curve analysis. P values less than 0.05 were considered statistically significant.

Diagnostic efficacy of the 3 scoring methods for CTD-ILD 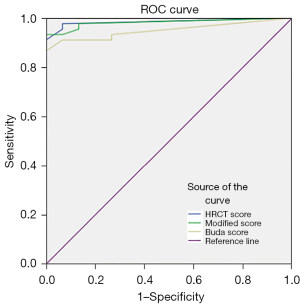 Data in this table are presented as median (interquartile range) (*). a, P<0.05 versus mild group; b, P<0.05 versus moderate group. CTD-ILD, connective tissue disease-associated with interstitial lung disease. 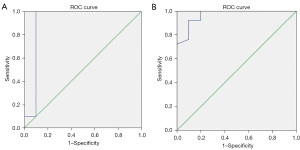 Assessing pulmonary interstitial fibrosis is an important aspect of autoimmune diseases. An accurate assessment of the condition and prognosis of the patient can help with the clinical adjustment of the treatment plan.

In this study, we developed a modified LUS scoring method that included 3 types of ultrasound performance: typical B-line manifestations of the lungs, abnormal pleural lines, and complications. In contrast to a previous study, the white lung score was adjusted from 1 point to 3 points (15). This new ultrasonic method includes various ultrasonic signs with different degrees of severity, facilitating the accurate diagnosis ability. Evaluation of CTD-ILD should be based on a comprehensive evaluation of possible ultrasound signs. Therefore, the pleural line, pulmonary parenchyma, and complications were comprehensively observed. Furthermore, there were more details in the modified scoring method, such as the more grades of B-line and the addition of pleural thickness, more possible complications as the abnormal manifestations to diagnose CTD-ILD.

The 72 ICS scanning method is a comprehensive LUS scanning scheme used to scan the whole lung of patients and observe all abnormal signs that may appear in CTD-ILD patients (27). In addition, during the scan, the 2 lungs were divided into 16 areas in the modified scoring system. Compared with the previous 12 divisions, the lateral chest wall was subdivided further. The anterior axillary line and the midaxillary line were combined. The posterior axillary line was disassembled. The first reason for this was that the scan of the ICS in the anterior and midaxillary lines differed from the scan of the ICS in the axillary lines. The second reason was that patients with severe ILD often had diffuse lesions in both lungs. Not having an average score for each division may cause a low score and underestimate the severity of severe patients. Each area was carefully observed, scored independently, and summed to obtain the total score.

Furthermore, Buda et al.’s (15) study found a new sign, called the Am-line. An Am-line artifact was defined as reverberation artifacts in the subpleural region, characterized by numerous horizontal lines. An Am-line usually arises from the pleural line (narrow) and reaches the edge of the screen (wide). An Am-line might result from the multiple reflections of ultrasound waves between 2 border surfaces, such as a pulmonary bulla or cavitation (28). The first border surface would be that of the pleural line and the second surface would be the wall of the emphysematous bulla or subpleural cyst. In this study, Am-lines were also found; they often appeared in patients with severe CTD-ILD, which may be the ultrasonic manifestation of subpleural pneumocysts caused by severe ILD. Therefore, we believe that the Am-line is also an important ultrasonic sign of ILD.

This study has some limitations. The evaluation of signs such as B-line number, pleural line shape, and the identification of false positive areas (such as pulmonary edema) mainly depended on the subjective judgment of the examiners, which inevitably led to errors. In addition, the sample size of this study was small, and the modified ultrasound scoring method and HRCT scoring method might vary with the different CTD. Consequently, the results of large-sample and multicenter studies are needed for further verification.

Funding: This study was sponsored by the Youth Research Project of Health and Family Planning Commission of Fujian Province, China (No. 2018-1-62) and the Quanzhou Science and Technology Project (No. 2018N012).

Reporting Checklist: The authors have completed the STARD reporting checklist (available at https://qims.amegroups.com/article/view/10.21037/qims-22-153/rc).

Conflicts of Interest: All authors have completed the ICMJE uniform disclosure form (available at https://qims.amegroups.com/article/view/10.21037/qims-22-153/coif). The authors have no conflicts of interest to declare.

Ethical Statement: The authors are accountable for all aspects of the work in ensuring that questions related to the accuracy or integrity of any part of the work are appropriately investigated and resolved. The study was conducted in accordance with the Declaration of Helsinki (as revised in 2013). The study was approved by the Ethics Committee of the Second Affiliated Hospital of Fujian Medical University (No. 2018-24), and informed consent was provided by all participants.