Ectopic hepatocellular carcinoma (EHCC) occurs in ectopic liver tissue (ELT) and is difficult to diagnose before surgery (1,2). ELT grows outside the mother liver and has no anatomical connection to it (3). It is extremely rare, with an incidence of 0.24–0.47% worldwide, and is mostly found by laparoscopic exploration or autopsy (4,5). In approximately 7–30% of cases, ELT undergoes malignant transformation to EHCC (6). The most common organ in which ELT develops is the gallbladder, followed by the thoracic cavity, perihepatic sclerenchyma, pancreas, retroperitoneum, spleen, and adrenal gland (5,7).

All procedures performed in the study were in accordance with the ethical standards of the institutional and/or national research committee(s) and with the Helsinki Declaration (as revised in 2013). Written informed consent was given by the patient for publication of this case report and accompanying images. A copy of the written consent is available for review by the editorial office of this journal.

A 30-year-old man with a known history of hepatitis B virus (HBV) infection presented to the oncology surgical clinic with a 1-year history of intermittent abdominal pain. He had been previously healthy and denied any history of prior hypertension, diabetes, coronary artery disease, or tumor. History of smoking and alcohol consumption was also denied. Upon examination, a mass without tenderness was palpable in the patient’s right upper abdomen. Laboratory studies showed an alpha-fetoprotein (AFP) level of 51,583.00 ng/mL and an HBV DNA (HBV-DNA) level of 2.55×102 IU/mL. The patient had normal liver function of transaminases and bilirubin, and there was no evidence of cirrhosis.

Because the mass and adjacent organs could not be completely scanned via upper abdominal dynamic contrast-enhanced magnetic resonance imaging (DCE-MRI) or lower abdominal DCE-MRI, abdominal B-ultrasound and enhanced computed tomography (CT) of the whole abdomen were performed. B-ultrasound revealed a solid mass in the right retroperitoneal space that might have originated from the right adrenal gland and was indistinguishable from the adjacent right lobe of the liver and the right kidney. Enhanced CT showed an irregular, heterogeneous mass in the right adrenal region that was displacing the vasculature and right kidney (Figure 1), but no abnormal density in the liver parenchyma. Enhanced CT of the chest did not provide any new information.

A multidisciplinary team composed of personnel from the departments of medical imaging, hepatobiliary oncology, abdominal oncology, gastroenterology, and pathology convened for discussion to clarify the diagnosis. Adrenal pheochromocytoma occurs in adults between the ages of 20 and 50 years and is characterized by paroxysmal or persistent hypertension and metabolic disorders. On imaging, it usually appears as a solid mass with central cystic changes due to hemorrhage and necrosis. A 24-h urine sample was collected from the patient for urinary vanilloid amygdalin (VMA) testing, but there was no obvious abnormality in the 3 days of continuous monitoring; 24-h ambulatory blood pressure monitoring also showed no abnormal change. Thus, the diagnosis of adrenal pheochromocytoma was excluded. Retroperitoneal liposarcoma is a solid soft tissue mass with mixed density, and the lesion is mainly composed of adipose tissue. This diagnosis of was ruled out after comparing the patient’s enhanced CT imaging with the typical imaging features of liposarcoma. Therefore, the diagnoses of adrenal pheochromocytoma, liposarcoma, and other possible diseases were excluded, and the team diagnosed the mass in the right adrenal region as EHCC. Ultrasonically guided liver biopsy was suggested to further clarify the pathological nature of the mass. However, the patient and his family refused biopsy and strongly requested that the mass be surgically removed.

An encapsulated mass with the dimensions of 12.0 cm × 10.0 cm × 8.0 cm was found tightly adhered to the right kidney but separate from the liver. It was resected together with the right kidney (Figure 2A,2B). Histopathological examination and immunohistochemistry (IHC) confirmed that the mass was HCC (Figure 2C-2F). 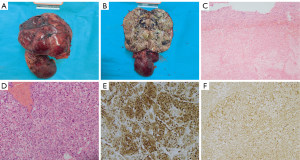 Liver function recheck on the first day after surgery showed the patient had a transient alanine transaminase elevation of 66 U/L. His total hospitalization was 24 days, and he was discharged on the 5th day after surgery. Interestingly, right adrenal tissue was not found in the resected tissue. We hypothesized that the tumor mass had inhibited the growth of the right adrenal gland, resulting in its disappearance.

The patient took the antiviral drug entecavir throughout the course of treatment. At 1 month after surgery, the patient presented for re-examination. The DCE-MRI of the upper abdomen showed that the right kidney and right adrenal gland were absent, and no abnormal signals or enhancement shadows in the liver parenchyma were found (Figure 3). As the diameter of the mass was >10 cm and the patient had high risk factors for postoperative recurrence, he was advised to have adjuvant therapy in our department, but he rejected this on the basis of his home being located far from the hospital. We learned from telephone follow-up that he received molecular targeted therapy with regorafenib for 6 months following surgery to avoid recurrence at the suggestion of the local hospital. His levels of AFP and HBV-DNA decreased to normal within 3 months after surgery, and no recurrence was found in either the liver or operation site on DCE-MRI at 1-year follow-up.

Patients with EHCC usually have no symptoms, and it is not easily detected unless compression symptoms or abdominal bleeding develop (2). In this case, the patient presented with a 1-year history of intermittent abdominal pain, and physical examination revealed an obvious abdominal mass. The EHCC occurred in the right adrenal region, which is rare. ELT is usually caused by abnormal migration during embryonic liver development (4-6). The complications of ELT include torsion, peritoneal bleeding, steatosis, cirrhosis, and cancer (3). Compared with normal liver tissue, ELT is more likely to develop into HCC (4-6). A previous study showed that the histological characteristics of liver tissue, including portal vein structure, regular lobules, and central veins, are preserved in ELT (8). Difficulties in biliary drainage and insufficient arterial blood supply and venous drainage may be some of the reasons for the carcinogenesis of ELT (8). Studies have revealed that the blood supply of ELT does not originate from the hepatic artery, and a portal vein system does not exist in ELT, with no bile duct system found under microscopy (2,6,9). Thus, the histological characteristics of ELT need to be further confirmed in a large number of clinical specimens.

No abnormal lesion has been found in the mother liver in the preoperative examination of any EHCC cases reported worldwide (1,2,6,10,11). Although the majority of the patients undergo radical surgical excision, several of them develop recurrence in the mother liver or abdominal cavity (1). These patients usually have preoperative AFP levels >1,000 ng/mL, with approximately 30% having a history of HBV infection and 27–32% having cirrhosis in the mother liver (2,6,11). Conforming with previously reported cases, our patient showed active virus replication as indicated by HBV-DNA examination, a high AFP level of 51,583.00 ng/mL, and no history of liver cirrhosis (6). Laparoscopy has a minimal role in patients with HCC of tumors >10 cm in diameter due to lack of working space, anatomical distortion, and difficulty in manipulating the lesion for safe dissection (12). In the present case, the EHCC was in the right adrenal region and closely connected with the right kidney and peripheral blood vessels, necessitating open surgery to remove the mass. Because preoperative retrograde pyelography showed that the left and right kidneys had no abnormal excretory function, the mass and the right kidney were resected together. HCC of the caudate lobe was not considered because during the intraoperative exploration, it was apparent that the tumor had a clear boundary with the liver capsule. Postoperative pathology and IHC supported the diagnosis of HCC. Arginase-1 (Arg-1) is the most sensitive and specific marker of hepatocyte differentiation (>90%) and is the first-line marker for distinguishing HCC from other tumors (11,13). AFP is mainly expressed by HCC (11). Previous studies have reported high positive expression of Arg-1 and AFP in patients with EHCC. Consistent with these early reports, immunohistochemical analysis in this case revealed positivity for Arg-1 and AFP (11,13).

At present, the preoperative diagnosis of EHCC is difficult (1,2). “Wash-in and wash-out” refers to an imaging manifestation of HCC, which shows homogeneous or heterogeneous enhancement in the arterial phase with lower enhancement in the portal vein and delayed phase compared with the surrounding liver parenchyma (14). A previous study reported that in the preoperative enhanced CT scans of EHCC, the heterogeneous enhancement of the lesion was found in the arterial phase, whereas no elution of the contrast medium was found in the portal and delayed phases (2). No such phenomenon was found in our case. EHCC should be considered if an extrahepatic mass of uncertain origin is present and the AFP level exceeds 1,000 ng/mL even if medical imaging examination finds no abnormal liver lesions. EHCC should be strongly considered if the mass exhibits the characteristic of wash-in and wash-out.

The first-line treatment for EHCC is the same as that for HCC, and surgical resection to remove the mass and regular re-examination after surgery, including imaging, are recommended. At present, no standard treatment exists to prevent postoperative recurrence (1,2,4-6). Postoperative chemotherapy has been reported, but not the specific regimen (11). In 2 cases of adjuvant chemotherapy based on cisplatin and bleomycin, neither showed local recurrence or distal metastasis 8 months after surgery (1,15). Targeted therapy with sorafenib and recurrence-free survival of more than 1 year have also been reported (7). In some cases of EHCC, no postoperative adjuvant therapy was administered (9,10). Our patient showed no recurrence or metastasis on DCE-MRI of his upper abdomen 1 month after surgery, but given the impact of the novel coronavirus pneumonia, he was not been regularly reviewed in our hospital since then, only by telephone.

This case of EHCC provides further details of its characteristics. EHCC should be considered if an extrahepatic mass of uncertain origin is present and the AFP level exceeds 1,000 ng/mL even if medical imaging finds no abnormal liver lesions. Surgical resection is the first-line treatment, and some postoperative adjuvant therapy is necessary to prevent recurrence even though there is not yet standardized treatment.

Funding: This work was supported by a grant from the National Natural Science Foundation of China (No. 82173317).

Conflicts of Interest: All authors have completed the ICMJE uniform disclosure form (available at https://qims.amegroups.com/article/view/10.21037/qims-22-629/coif). The authors have no conflicts of interest to declare.

Ethical Statement: The authors are accountable for all aspects of the work in ensuring that questions related to the accuracy or integrity of any part of the work are appropriately investigated and resolved. All procedures performed in the study were in accordance with the ethical standards of the institutional and/or national research committee(s) and with the Helsinki Declaration (as revised in 2013). Written informed consent was given by the patient for publication of this case report and accompanying images. A copy of the written consent is available for review by the editorial office of this journal.