Nutcracker syndrome (NCS) refers to compression of the left renal vein (LRV) and involves symptoms such as hematuria and low back pain. There are two variants of NCS: anterior (ANCS) and posterior (PNCS). In ANCS, the LRV is compressed between the aorta and the superior mesenteric artery, whereas in PNCS, the LRV has a retroaortic course and is compressed between the aorta and vertebral column. Posterior NCS is the rarer of the two variants, with a prevalence of 0.77–1.56% (1,2).

Ultrasound is an important tool for examining blood flow in the LRV as well as the spectrum, with high sensitivity (69–90%) and specificity (89–100%) (3). However, few studies have focused on the ultrasound features of PNCS. In this paper, we describe the clinical and ultrasound characteristics of eight cases of PNCS that could help to establish an accurate diagnosis. We also followed up these cases in an effort to gain an understanding of the features and prognosis of PNCS.

All procedures in this study were performed in accordance with the ethical standards of the Biomedical Ethics Review Committee of West China Hospital of Sichuan University and in line with the Declaration of Helsinki (as revised in 2013). Written informed consent was obtained from the patients for the publication of their case reports and accompanying images. A copy of the written consent is available for review by the editorial office of this journal.

The ultrasound database of the West China Hospital of Sichuan University was searched retrospectively for diagnoses of “posterior nutcracker phenomenon” (PNP) made between January 2010 and July 2021 by professors in the Department of Ultrasound’s vascular subspecialty group, all of whom have considerable experience. The criteria for a diagnosis of PNP in the Department of Ultrasound are presented in Table 1. After patients with PNP had been identified, the hospital’s electronic medical records were searched to obtain the patients’ demographic information, including their age and sex, laboratory results, other imaging reports, and management details. Patients were contacted via telephone and outpatient follow-up to obtain treatment and follow-up information.

During the study period, eight patients were diagnosed with PNP. The features and follow-up information for these eight patients is summarized in Table 2. All eight patients were adults (aged 26–48 years) and four were female. One patient (case 7) presented to the West China Hospital of Sichuan University with gross hematuria, whereas the other patients had only microscopic hematuria. These eight cases accorded with the features of PNCS. None of the patients had a family history of PNCS. Comorbidities were absent in all but one patient (case 8), who had a history of hepatocellular carcinoma. Physical examinations of the patients were normal. Typical ultrasound images of PNCS in a 34-year-old woman (case 5) are shown in Figure 1. 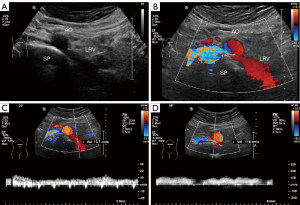 Another patient, a 31-year-old female (case 7), had combined NCS, where there was compression in duplication of LRV with a pre- and retroaortic course. Ultrasound and CT vein reconstruction images for this patient are shown in Figure 3.

As part of the clinical workup, ultrasound of the renal veins, as a cheap and non-invasive procedure, is the initial investigative tool. Patients are recommended to fast before undergoing this examination. Patients should be examined in both supine and upright positions, which will aggravate the stenosis to help to confirm the diagnosis.

Because there are no specific ultrasound diagnostic criteria for PNP, NCS diagnostic criteria were used (4,5). The criteria used to diagnose patients with PNP in the Department of Ultrasound are presented Table 1. Specifically, for a diagnosis of PNP, gray-scale images must show compression of the retroaortic LRV between the aorta and the vertebral column (i.e., narrowing of the LRV between the abdominal aorta and spine, and dilation of the distal part of the LRV). A diagnosis of PNP should be considered if the ratio of the diameter of the dilated part of the LRV to that of the narrow part is >3:1 in the supine position or >4:1 in the spinal extension position. Venous stenosis can be detected by comparing the peak velocity in the vein proximal to the aortic transition with that in the vein distal to the aortic transition (6). A ratio of peak systolic flow velocity (PSV) at the narrow part of the LRV to that at dilated part >3:1 may also be helpful in making a diagnosis.

Detailed ultrasound information for all eight patients is presented in Table 3.

Ultrasound information for all the patients (n=8)

Posterior NCS is a rare disease that is often found after further examinations for microscopic hematuria detected during urine examinations. Underlying anatomical variants, such as a retroaortic LRV or renal collar, aortic pathology like abdominal aneurysms, and lumbar osteophytosis (e.g., vertebral pathology), can result in PNCS (7). Symptoms of renal venous hypertension, such as abdominal flank pain, hematuria, left-sided varicocele, pelvic varices (if decompressed by collaterals), and chronic pelvic pain, are related to pelvic venous disorders that accompany compression of the LRV. The so-called “nutcracker phenomenon” means that the LRV is compressed between the superior mesenteric artery and the abdominal aorta or between the aorta and spine, and can only be seen on imaging without clinical manifestations (8,9). There is another type of anatomical variant, circumaortic venous ring, in which there are two LRVs compressed along the aortic-mesenteric and aortic-vertebral course (3).

Ultrasound is the most commonly used tool for the diagnosis of NCS; it allows for the detection of LRV stenosis, possible kidney dysfunction, and varicocele secondary to obstruction of venous reflux in the LRV (3,9,10). However, ultrasound is limited in that it depends on the examiner’s experience and is difficult to perform in patients with obesity. The compressed LRV may result in pelvic venous stasis or varicocele. In this situation, the spermatic vein and left ovarian vein are tortuous and dilated, which can present as beaded changes in gray-scale ultrasound images, as well as abundant blood flow signals on color Doppler ultrasound during the Valsalva maneuver. There is are no specific criteria for PNCS, so doctors at the Department of Ultrasound of West China Hospital refer to the criteria used to diagnose NCS (Table 1). A previous study reported that the mean (± SD) PSV after stenosis was 110.7±35.8 cm/s (11), and that a five-fold increase in the PSV of the LRV as it passes the retroaortic space (12) could help with diagnosis. When an accurate diagnosis cannot be made using ultrasound, abdominal CT or magnetic resonance imaging can be used for further examinations. When PNCS cannot be confirmed using these non-invasive examinations, an invasive examination should be performed. Phlebography and measurement of the venous pressure gradient between the LRV and inferior vena cava are considered gold standards for diagnosis (3). Intravascular ultrasound has also become an extremely important diagnostic adjunct in deep venous pathology and has higher specificity than phlebography (13).

For patients with NCS who have discrete hematuria and mild symptoms, conservative treatment is recommended (3). Drug therapy, such as angiotensin-converting enzyme inhibitors and aspirin, is used to ameliorate proteinuria and renal perfusion. If symptoms—which can include recurrent gross hematuria, flank or abdominal pain, impaired kidney function, and varicocele formation—are not alleviated and conservative measures are ineffective, surgery (open, laparoscopic, and/or endovascular) should be considered (3).

In the present study, none of the patients experienced an improvement in their symptoms. Despite this, the prognosis of PNCS in this case series was good, with no significant impact on the patients’ quality of life. This is in agreement with the findings of a previous study, in which all patients who received conservative treatment had either well-controlled symptoms or experienced spontaneous resolution (14). In females, pelvic congestion syndrome—the characteristics of which are lower abdominal pain, dysmenorrhea, dyspareunia, and vulval, gluteal, or thigh varices—will also affect the quality of life (15). Obstruction of the LRV reflux may lead to kidney congestion, and if prolonged, can progress to chronic interstitial nephritis (15).

This study has some limitations. First, follow-up data (clinical information, laboratory tests, and ultrasonography) were incomplete or missing for some patients who did not attend regular follow-up reviews. Moreover, these patients did not undergo other examinations, such as phlebography and intravascular ultrasound, to further confirm their diagnoses.

In the clinical setting, the possibility of NCS should be considered if the patient has non-glomerular hematuria and varicocele (in males) or ovarian varices (in females). Ultrasound is a widely used diagnostic imaging method for NCS. If ANCS is ruled out, consideration should be given to the possibility of PNCS. An accurate diagnosis can provide guidance for treatment. Posterior NCS in young patients is characterized by a good prognosis.

The authors thank Chun-Cheng Liu, Ting Zhang, Yu-Jia Yang, and Yuan-Jiao Tang, who are professors in the vascular subspecialty group at the Department of Ultrasound, West China Hospital of Sichuan University, for acquiring the images for the cases presented herein.

Funding: This study was supported by the National Natural Science Foundation of China (No. 82102067) and 1·3·5 Project for Disciplines of Excellence-Clinical Research Incubation Project, West China Hospital of Sichuan University, Sichuan, China (No. 2020HXFH049).

Conflicts of Interest: All authors have completed the ICMJE uniform disclosure form (available at https://qims.amegroups.com/article/view/10.21037/qims-22-166/coif). The authors report that the study was supported by the National Natural Science Foundation of China (No. 82102067) and 1·3·5 Project for Disciplines of Excellence-Clinical Research Incubation Project, West China Hospital of Sichuan University, Sichuan, China (No. 2020HXFH049). The authors have no other conflicts of interest to declare.

Ethical Statement: The authors are accountable for all aspects of the work in ensuring that questions related to the accuracy or integrity of any part of the work are appropriately investigated and resolved. All procedures in this study were performed in accordance with the ethical standards of Biomedical Ethics Review Committee of West China Hospital of Sichuan University and with the Declaration of Helsinki (as revised in 2013). Written informed consent was obtained from the patients for publication of this case report and accompanying images. A copy of the written consent is available for review by the editorial office of this journal.