Positron emission tomography/computed tomography (PET/CT) provides functional and anatomical information about the human body in a single scan and has been widely used in clinical practice (1). Images from PET can yield the metabolic information with 18F-fluorodeoxyglucose (FDG) for tumor staging and other diagnostic information; however, its low spatial resolution and high noise level limit the ability to locate lesions precisely. It is a common approach to use CT images in PET/CT to acheive automatic organ segmentation. Automatic pulmonary region segmentation is a basic task in computer-aided diagnostic systems. The location and distribution of lesions can be a signiﬁcant factor in determining the follow-up treatment. The National Emphysema Treatment Trial Research Group’s study (2) reported that locally distributed emphysema could be treated more effectively by lobar volume resection than homogeneously distributed emphysema. In addition, the early diagnosis of lung disease indicates a good prognosis. Recent advances in deep learning (DL), especially the deep convolutional neural network (CNN), have accelerated the development of automatic pulmonary nodule detection and classiﬁcation system (3-7), which can assist radiologists in minimizing workloads. Precise segmentation of lung lobes and airway trees also contributes to the accurate identification of the lesion positioning, preventing the ignorance of location information during the direct lesion segmentation.

There have been some unsupervised models with traditional computer vision methods used in lung lobe segmentation, which usually include detecting ﬁssures and locating bronchi and vessels (8,9). Common techniques are the main solution in the airway trees segmentation task (10-17). Other methods proposed in the past include rule-based methods (14,18), energy function minimization (17), and region of interest (ROI) modiﬁcation-based techniques (19). Schlathoelter et al. (20) used a front-propagation algorithm for segmenting airway trees. Branch points are detected when the front splits up. With the development of computer technology, DL has emerged as the most promising technology. The CNN models have matured and now demonstrate considerable performance guarantees through many developmental milestones (21-26). Currently, research under the medical images domain widely leveraged the CNN models, including lesion detection, quantitative diagnosis, lesion segmentation, and so on (27-31).

The end-to-end trained fully convolutional networks (FCN) were initially developed as the solution for image segmentation problems in the computer vision domain (32,33). They were a popular model in the region and lesion segmentation task. In Gibson et al. (34), a new CNN architecture, dense V-network (DenseVNet), was reported and demonstrated in the multi-organ segmentation task on abdominal CT. Imran et al. (35) developed a new model for lung lobe segmentation using DenseVNet and progressive holistically nested networks on routine chest CT. Nadeem et al. (36) used the U-Net followed by a freeze-and-grow propagation algorithm to increase the completeness of the segmented airway trees iteratively. Garcia-Uceda et al. (37) developed a fully automatic and end-to-end optimized airway trees segmentation method for thoracic CT based on the U-Net architecture. However, most current algorithms are proposed only for lung lobe or pulmonary airway tree segmentation (20,21), and lack a suitable algorithm for simultaneous segmentation of pulmonary lobes and airway trees.

The focus of this study was to segment five lobes and airway trees, leveraging CT images in PET/CT scanning via DL combined with post-processing methods. We present the subsequent sections following the MDAR reporting checklist (available at https://qims.amegroups.com/article/view/10.21037/qims-21-1116/rc).

We retrospectively enrolled patients who underwent both PET/CT and separate CT at Peking Union Medical College Hospital. All cases were observed to have pulmonary nodules. The study was conducted in accordance with the Declaration of Helsinki (as revised in 2013) under the approval of the Institutional Review Board of the Peking Union Medical College Hospital, and individual consent for this retrospective analysis was waived. The PET/CT scan was performed on a Siemens Biograph Truepoint PET/CT scanner (Siemens Healthineers, Erlangen, Germany). The whole-body PET/CT scanning protocol was described in a previous study (21). A separate chest CT imaging was also performed. The voltage output of the X-Ray generator was 120 kVp, and the X-Ray tube current was 300 mA. Using a standard reconstruction algorithm, the thin-slice reconstruction thickness was 1.25 mm, and the interval was 0.8 mm. The scanning range spanned from the apex of the lung to the diaphragm. CT images were recorded in the standard Digital Imaging and Communications in Medicine (DICOM) format with a voxel spacing 0.8×0.8×1 mm3 with dimensions of 512×512×337.

The CT dataset was randomly divided into the training, validation, and independent test sets. A total of 476 cases were used in the training model. The validation included 134 cases and was used for fine-tuning the hyperparameters and select for the best parameters, and the independent test dataset included 30 cases and was used to evaluate the performance of our methods.

All images were processed on an open-source platform named 3D Slicer (version 4.6) (38). The ground truth of pulmonary lobes and airway tree segmentation was marked by a nuclear medicine physician supervised by a senior physician with experience in chest diagnosis. The pulmonary region was labeled with six labels based on anatomy: three labels in the right lung, two labels in the left lung, and one label in the airway trees.

In this paper, we combined the DL method and traditional image post-processing methods to obtain the final segmentation of lung lobes and airway trees. The workflow is shown in Figure 1. 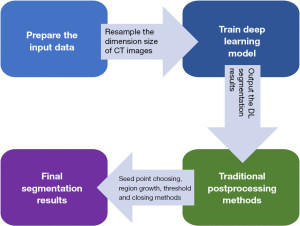 The DL method used the DenseVNet, and the architecture is shown in Figure 2. Before inputting the image to the DL model, the dimension of input data was resampled to 200×200×160 due to the high resolution of the medical three-dimensional (3D) images. Each convolutional kernel size in the dense feature block was 3×3×3. The max pooling method was used after the dense feature block ,and rectified linear unit (ReLU) was used to represent nonlinear functions. During the training procedure, the Dice score was used as the loss function, and Adam optimizer with lr=0.001 and mini batch size of 6 for 7,000 iterations were also used. Training each instance of the network took approximately 12 hours using v100 16G GPUs (NVIDIA Corp., Los Alamitos, CA, USA).

The traditional image post-processing methods were applied to increase the accuracy of segmentation results gained from DenseVNet. The region growing algorithm based on seed points is mainly used in the post-processing of airway trees, and it includes three steps. First, calculate the mean Hounsfield unit (HU) value (M) from the original airway trees label that comes from the DL segmentation model. Second, find the seed point on the largest connected area of the original airway trees label. Third, compute the final airway trees based on the seed point in the threshold (–1,024, M) range via the region growth method.

Three essential metrics were used to assess the DenseVNet and the combined model. The average was used to summarize the evaluation metrics. The agreement between the results and the ground truth was calculated via the Bland–Altman plot. Student’s t-test or the Wilcoxon rank sum test was used to compute the differences between results and references, depending on if the data were normally distributed. Statistical analysis was performed on R software (version 3.5; R Foundationt for Statistical Computing, Vienna, Austria, http://www.r-project.org). A P value less than 0.05 was considered statistically significant. 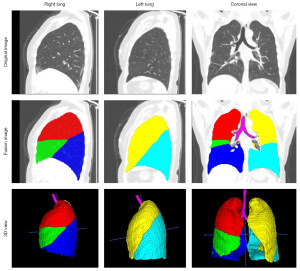 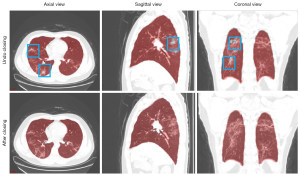 Figure 4 The results for one case before and after using the closing method in pulmonary lobes segmentation (blue box) in axial, sagittal, and coronal views.

We further used Bland-Altman plots to evaluate the agreement between the combined model (DL model with post-processing method) and ground truth segmentations based on the voxel volumes in the test set. Good agreement was observed between our segmentation in every plot because 95% of cases in the dataset fell within two standard deviations (within an interval between two dotted lines), as shown in Figure 5. 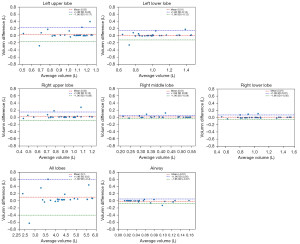 We showed that this automatic DL-based post-processing method could be a valuable tool for the simultaneous segmentation of the lung lobes and airway tree. In our study, we chose independent CT images other than the fusion PET/CT scans to do the segmentation due to the high image quality of the chest CT scans. This study serves as a preliminary attempt at the feasibility of the segmentation methods, and further works will focus on the additional functional information from PET images.

The improved DenseVNet exhibited better performance in segmenting multi-organs on abdominal CT compared with previous models (34). The shallow V-network architecture and densely linked layers are important factors in this network. Normal organs can achieve accurate segmentation results, but our datasets’ occupancy lesions like lung nodules lead to unsatisfactory results. After using the post-processing method in the original results of pulmonary lobes and airway trees, the accuracy of the model could be increased. Figure 4 shows that the missing parts of the pulmonary lobes are filled in after using the closing method in the segmentation of the pulmonary lobes. Figure 6 demonstrates clearer airway tree segmentation using the seed point in the threshold (−1,024, M) range via the region growth method.

Figure 6 The results for one case before (A) and after (B) using post-processing of pulmonary airway trees segmentation in 3D view. 3D, three-dimensional.

There were some limitations to our study. First, this was a single-center study; the training and test data set were from a single hospital, and the final model should be validated and tested on multi-center data sets. Second, patients with lung nodules were involved in this study, and it is necessary to include other lung disease data to improve the model’s generalization in future studies. Overall, we proposed a combined DL-based post-processing method that had good performance for segmenting the lung lobes and airway trees. The efficiency based on a single DL and joint model was compared. Our results indicate this combined model can be helpful in precise anatomical information for further PET/CT lesion location issues.

Reporting Checklist: The authors have completed the MDAR reporting checklist. Available at https://qims.amegroups.com/article/view/10.21037/qims-21-1116/rc

Conflicts of Interest: All authors have completed the ICMJE uniform disclosure form (available at https://qims.amegroups.com/article/view/10.21037/qims-21-1116/coif). XZ, YN, and SW are employed at GE Healthcare, whose products or services may be related to the subject matter of the article, although these authors provided technical support only. The other authors have no conflicts of interest to declare.

Ethical Statement: The authors are accountable for all aspects of the work in ensuring that questions related to the accuracy or integrity of any part of the work are appropriately investigated and resolved. The study was conducted in accordance with the Declaration of Helsinki (as revised in 2013). The study was approved by the Ethics Committee of Peking Union Medical College Hospital, and individual consent for this retrospective analysis was waived.