Impaction of fish bones in the submandibular gland following ingestion

Following ingestion, foreign bodies, such as fish bones, are mostly found in the pharynx or the roots of the tongue, and in most cases, can be diagnosed by visual images or fiberoptic laryngoscopy (1-3). However, migration of an ingested fish bone to the submandibular gland is relatively difficult to diagnose and/or remove (3-5). If the foreign body is unrecognized, subsequent inflammatory reaction as a result the foreign body can cause obstructive symptoms and consequential acute or chronic infection (5-7). We wanted to emphasize this rare, but possible, incarceration of submandibular gland and to draw reader’s attention for careful detecting of the extrapharyngeal foreign bodies after a fish bone is ingested by mistake.

In this case, an 80-year-old man was admitted to the hospital, complaining that he had been experiencing paroxysmal jaw pain for one month after eating bones of sparus latus. No treatment had been administered, he reported that his pain worsened with swallowing. Swelling and tenderness were observed in the left submandibular area. He had no history of a submandibular space abscess, and his medical history was unremarkable. With mechanical stimulation, no secretion was observed on the left side of the submandibular area. Examination of the pharynx was performed by fiberoptic laryngoscopy, and no abnormalities were observed. The radiographs of the frontal and lateral neck also showed no foreign bodies (Figure 1A,1B). The patient had no clinical signs of fever or trauma, except for discomfort during palpation of the left submandibular region. Laboratory data revealed normal leukocyte, hemoglobin, platelet counts, and C-reactive protein levels. 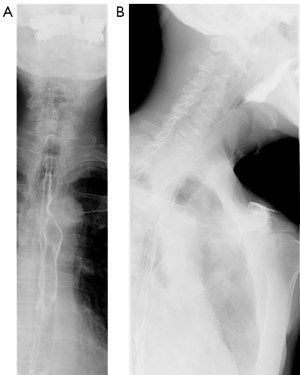 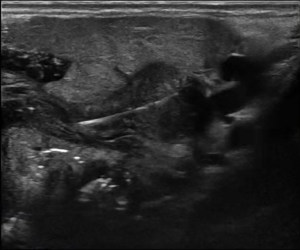 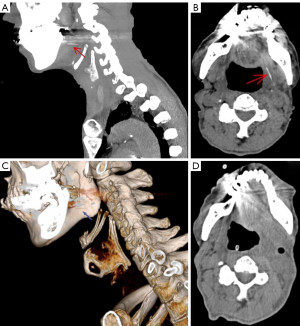 Surgical intervention was done on admission. The patient underwent transoral endoscopic under general anesthesia, exploring the left tongue root. An incision was made approximately 1 cm behind the left angle of the mandible along the direction of the submandibular gland, and the skin flap was elevated along with the adjacent tissue. The submandibular gland was exposed and the adjacent tissues appeared to be normal, with no foreign bodies visible. Probing of the submandibular gland with a mosquito clamp revealed a sharp and hard foreign body on the surface of the left submandibular gland. The foreign body was enclosed by adjacent tissues, because it remained in the pharynx for a long time. The tip of the fish bone was completely removed, and the incision was closed, bleeding was minimal. As the fish bone was precisely located in the suggested region of the ultrasonography and CT images, no complications occurred during the surgery, postoperative course was uneventful, re-examination of CT 3 days after the operation showed the foreign body was removed (Figure 3D), administration of antibiotics was continued after the surgery, swelling and dysphagia gradually disappeared.

The ingestion of a foreign body is a common phenomenon in clinical settings, and most patients undertake improper measures after swallowing foreign bodies, causing the foreign body to migrate to distant tissues by penetrating the pharynx or esophagus. In most cases, foreign bodies are sharp fish bones, originating from the pharynx or esophagus. Forward movement of the fish bones into the submandibular gland is very uncommon (3-5). Although the mechanism of migration is unclear, the main reason for the movement of fish bone to the pharyngeal cavity is that the front end of the fish bone is sharp, according to the angle of penetration into the pharyngeal mucosa, the fish bone may be buried outside the pharyngeal cavity. In addition, once a foreign body impinges into the pharyngeal muscle, muscle spasm and peristalsis caused by pain can create a push to thrust deeper. Moreover, the movement of mouth opening-and-closing or chewing also promote migration. For example, swallowing rice or steamed bun after swallowing foreign bodies by mistake is one of the main causes of foreign bodies moving out of the pharynx. In this case, due to muscle spasms caused by pain and tongue movement caused by articulation and swallowing rice the fish bone that pierced into the left side of the lingual muscle layer moved deeper into the submandibular gland. One of the complications of foreign bodies in the oral cavity is an abscess. Fortunately, no abscess was observed in this case. The absence of severe secondary infection was attributed to the fact that the bone did not penetrate the deep fascial spaces.

However, foreign bodies in the oral cavity are often complicated by severe infection or abscess formation in deep cervical fascia spaces, even chronic obstruction of a salivary gland, which call nonspecific sialoadenitis (5,8,9). Therefore, identification and removal of the body as early as possible is important (1,4,10). The retrieval of foreign bodies may be challenging due to the size of the object, its site, and the surrounding anatomical structures. Accurate localization of the foreign body before its removal is essential.

The submandibular glands are a pair of salivary glands located in the bottom of the tongue, on each side of the lower jaw. The primary function of the submandibular glands is to control the flow of saliva into the area of the mouth that is located just under the tongue. As the submandibular area contains many important vascular and vital glands and duct (11,12), any foreign body may cause problems such as infection or chronic inflammation in the long-term follow-up, which can lead to serious complications. It is important to treat the foreign bodies carefully. With time, diagnoses of these foreign bodies are much more difficult because some materials such as fish bone enclosed by adjacent tissues cannot be easily detected radiologically and can also lead to loss of some anatomic structures.

In this case series, the patient experienced a pricking sensation, accompanied by swelling of the neck, and pain in the throat, after mistakenly swallowing a fish bone. The patient was referred to the hospital 30 days after onset. Throat fiberoptic laryngoscopy and neck chest radiography were performed, with no abnormalities detected. In an attempt to remove the source of pharyngalgia, the patient reported repeated swallowing of green vegetables and rice. In this situation, the fish bone may have been buried in the mucosa of the throat or pharynx in the early stages, and repeated chewing may have subsequently promoted migration. Physicians must not just focus on the throat or X-ray radiography of the neck and chest and subsequently deny the existence of a foreign body based on the negative results. These results are due to the insensitivity of X-ray radiography in the consistent identification of fish-bone foreign bodies, as there have been reports of higher efficacy CT scans for the identification of fish-bones (9,13). Thus, in similar cases with no positive detection of foreign bodies on throat fiberoptic laryngoscopy examination or X-ray radiography, ordering a CT scan or Ultrasound of the neck is advisable. The patient underwent ultrasonography and CT scans after admission to the hospital. The foreign body was extracted under general anesthesia via a Surgical excision method. The patient had a successful recovery.

Conflicts of Interest: All authors have completed the ICMJE uniform disclosure form (available at https://qims.amegroups.com/article/view/10.21037/qims-22-275/coif). The authors have no conflicts of interest to declare.