In this study, the relationship between subclinical hypothyroidism and the risk of individual CSVD lesions (assessed using the biomarkers WMH, lacunes, microbleeds, and EPVS), the overall CSVD load, and brain atrophy in the stroke-free population was assessed.

Stroke-free individuals who underwent a health check-up in the First Affiliated Hospital with Nanjing Medical University from July 2016 to December 2018, were consecutively and retrospectively screened for eligibility to this study. Patients were included if they satisfied the following inclusion criteria: (I) no history of stroke; (II) TSH, free thyroxine (FT4), and free triiodothyronine (FT3) data were available (thyroid-related antibodies were not routinely tested); (III) complete echocardiography data were available (Philipa, Netherland); (IV) assessment of carotid arteriosclerosis was conducted by Doppler Ultrasound (Toshiba, Japan); and (V) MRI data were available. Patients were excluded if they presented with the following: (I) overt thyroid disease defined by TSH >10 mIU/L, FT4 out of reference range, or FT3 out of reference range; (II) a history of thyroid diseases, or were treated with antithyroid medications or replacement thyroxine therapy; (III) bright signal on diffusion-weighted imaging (DWI)-MRI; (IV) carotid arteriosclerosis with lumen stenosis greater than 70% and left ventricular ejection fraction <50%; and (V) a history of brain tumor, brain trauma, or malignancy.

This study was conducted in accordance with the Declaration of Helsinki (as revised in 2013). The study protocols were approved by the Ethics Committee of the First Affiliated Hospital with Nanjing Medical University, and informed consent was obtained from all subjects or their representatives.

Peripheral serum was collected to determine the concentrations of serum TSH, FT4, and FT3 using an automated electrochemiluminescence immunoassay (IMMULITE, Diagnostic Products Corporation, CA, USA). According to the international standard (7), elevated TSH levels (4.5–10.0 mIU/L) with normal FT4 levels (9.0–24.4 pmol/L) were defined as subclinical hypothyroidism. Individuals with normal thyroid function were assigned to the normal group. The normal reference range for TSH, FT4, and FT3 are 0.41–4.49 mIU/L, 9.0–24.4 pmol/L, and 3.1–6.6 pmol/L, respectively. 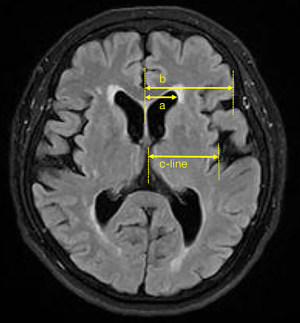 The SPSS software (version 22.0) was used for all statistical analyses. Categorical variables are expressed as n (%), and continuous variables are expressed as mean ± standard deviation (SD). Differences in baseline characteristics between two groups were analyzed using χ2 or Kruskal-Wallis test where appropriate. Binary logistic regression was used to explore the association of subclinical hypothyroidism with individual CSVD markers, including confluent WMH, lacuna, microbleeds, and EPVS. Ordinal regression was performed to investigate the association of subclinical hypothyroidism with the overall CSVD load and brain atrophy (increase in the a/b ratio or reduction of the c-line distance, where a/b and c-line distance were categorized as quartiles). Statistical significance was defined as P<0.05 (two-tail).

A total of 354 participants (66.9% males) with a mean age of 69.4±12.8 years was enrolled in this study. In this cohort, 53.4% presented with hypertension, 31.4% had hyperlipidemia, 30.5% had diabetes mellitus, 7.6% had atrial fibrillation, 56.8% had carotid arteriosclerosis, and 18.6% presented with coronary heart disease. A history of smoking was reported in 26.8% of participants, and 18.6% reported a history of drinking. Subclinical hypothyroidism was observed in 44 (12.4%) patients. Table 1 illustrates the demographic, laboratory, and clinical characteristics of the participants grouped by subclinical hypothyroidism. Patients with subclinical hypothyroidism tended to be older (P=0.035), male (P=0.027), experienced more prevalent hypertension (P=0.035) and carotid arteriosclerosis (P=0.022), and were less likely to have a history of smoking (P=0.021) and drinking (P=0.018).

The demographic, laboratory, and clinical parameters of the participants grouped by subclinical hypothyroidism (SCH)

The relationship between subclinical hypothyroidism and overall CSVD load

This study demonstrated that subclinical hypothyroidism was significantly related to overall CSVD load and EPVS in the stroke-free population. Moreover, these relationships were still evident after controlling for possible confounding factors.

An important function of the perivascular space is to drain interstitial fluid back to the circulation (19). The perivascular space is subject to blood-brain barrier dysfunction and increases in intra- and extra-cranial vascular pulsatility (20,21). While most patients with subclinical hypothyroidism do not exhibit clinical symptoms, subclinical hypothyroidism can negatively affect the vascular system (5,6). For instance, when the vessels are stiff, high pulsatile waves are transmitted to the vascular bed of the terminal organ, forcing the arterioles to adapt to higher blood flow, which might impair endothelial function and compromised the drainage of interstitial fluid (4,22). Eventually, the perivascular spaces lose the ability to drain interstitial fluid and become enlarged (23).

The current study had several strengths. The stroke-free status of patients was determined according to a positive history or positive findings on diffusion-weighted MRI. Both carotid arteriosclerosis and left ventricular eject fraction were assessed. Furthermore, a comprehensive assessment of various visible CSVD markers on brain MRI and several covariates were applied to analyze the relationship between subclinical hypothyroidism and CSVD. The relationship between subclinical hypothyroidism and brain atrophy was also investigated.

However, a causal relationship could not be established between subclinical hypothyroidism and CSVD, as there were several limitations to the current study. First, data were collected from a single center with a sample size of 354, which may lead to sampling bias. Second, data were observational, and the location of lacuna and the volume of WMH were not measured. Third, this is a cross-sectional study, and single measurements of TSH, FT3, and FT4 may lead to inevitable misclassification. Future large-scale longitudinal studies with repeated measurements of TSH, FT3, and FT4 are warranted to address these issues.

Funding: This work was supported by the National Natural Science Foundation of China (Grant No. 81771286).

Conflicts of Interest: All authors have completed the ICMJE uniform disclosure form (available at https://dx.doi.org/10.21037/qims-21-190). The authors have no conflicts of interest to declare.

Ethical Statement: The authors are accountable for all aspects of the work in ensuring that questions related to the accuracy or integrity of any part of the work are appropriately investigated and resolved. The study was conducted in accordance with the Declaration of Helsinki (as revised in 2013). This study protocol was approved by the Ethics Committee of the First Affiliated Hospital with Nanjing Medical University, and informed consent was obtained from all subjects or their representatives.