In the fields of diagnosis and treatment, full knowledge and accurate understanding of detailed anatomical information is a vital requirement. Cinematic rendering (CR) is an emerging methodology for three-dimensional visualization of volumetric imaging. The use of a global lighting model and direct and indirect lighting is the most prominent feature of CR to create images (1). CR images contain more shadowing and depth details that are not available from maximum intensity projection and volume rendering (2). Therefore, CR may promote image interpretation and improve the visualization of anatomical features such as tissues and bones.

A 54-year-old man presented with a 1-year history of worsening severe pain in the right hip joint, without a history of lower extremity trauma or surgery. The pain intensity increased during walking. Physical examination demonstrated a full range of motion of the hip joints without atrophy, swelling or deformity. The patient had received conservative treatment in other hospitals but did not show any response to the treatment.

To clarify the etiology, the patient received related examinations in the radiology department. At admission, pelvic X-ray and computed tomography (CT) showed an osseous prominence protruding from the lesser trochanter, narrowing the distance between the lesser trochanter and the ischial tuberosity (Figure 1A,1B). The bone marrow of the osteochondroma that compressed the QF was continuous with the bone marrow of the lesser trochanter. In this report, the CR image from CT data could realistically show the relationship between the parent bone and the osteochondroma from different views (Figure 2). Magnetic resonance imaging (MRI) revealed that the osteochondroma (size: 22×11×34 mm3) originated from the lesser trochanter and the hyperintense signal was indicative of edema in the QF (Figure 3A). The MRI signals revealed severe narrowing of the right ischiofemoral space (IFS) and the quadratus femoris space (QFS) (distances of 10 and 6 mm, respectively) compared with the contralateral side. In addition, the CR image from MRI data had even better performance in showing the narrowing of the IFS and edema of the QF (Figure 3B) 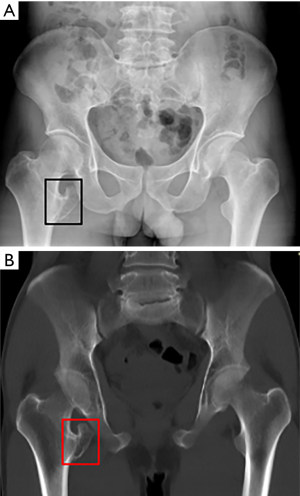 Figure 1 X-ray and CT MIP reconstruction results. (A,B) Pelvic X-ray (A) and coronal CT MIP reconstruction (B) (slice thickness: 10 mm) show the presence of an osteochondroma of the lesser trochanter and narrowing of the distance between the lesser trochanter and the ischial tuberosity (black and red frames). CT, computed tomography; MIP, maximum intensity projection. 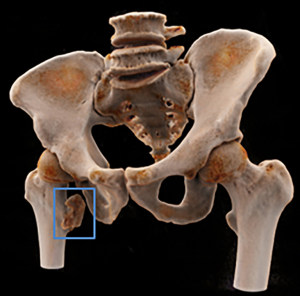 Figure 2 CR image from the CT data at the coronal plane. This CR image contained detailed anatomical information of the osteochondroma in the right lesser trochanter bone and the relationship between the osteochondroma and the parent bone (blue frame). CR, cinematic rendering; CT, computed tomography. 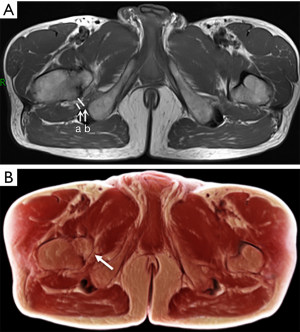 Figure 3 Axial MRI image and CR image from the MRI data. (A) Axial MRI T1-weighted image showing mild edema and focal fatty infiltration in the QFS, and narrowing of the QFS (a, 6 mm) and IFS (b, 10 mm). (B) CR image from MRI data, which more realistically demonstrated the narrowing of the IFS and edema of the QF (white arrow), allowing for easier understanding of this disease by the orthopedic surgeon and the patient. MRI, magnetic resonance imaging; CR, cinematic rendering; QFS, quadratus femoris space; IFS, ischiofemoral space; QF, quadratus femoris.

The large-sized osteochondroma was surgically removed and was post-surgically confirmed to be an osseous prominence from the lesser trochanter with entrapment of the QF that presented with edema. Histopathological examination showed an osteocartilaginous mass with no cellular atypia or malignant differentiation. Therefore, the diagnosis of osteochondroma was confirmed. Postoperatively, the patient was allowed to use crutches to bear weight and was discharged 4 days later. During the 3-week follow-up, the patient’s mobility was dramatically improved, and he was able to walk without crutches.

Ethical approval was granted from the hospital’s ethics committee, and all procedures performed in studies involving human participants were in accordance with the ethical standards of the institutional and/or national research committee(s) and with the Helsinki Declaration (as revised in 2013). Written informed consent was obtained from the patient for publication of this case report and accompanying images. A copy of the written consent is available for review by the editorial office of this journal.

Hip impingement is a bone-related condition that can cause hip and pelvic pain (6). The abnormal contact between the acetabulum and the femur or between the ischium and the femur are the two main causes of hip impingement (7). IFIS has not been studied in much detail but has recently received increased recognition (8,9). IFIS is characterized by narrowing the space between the proximal femur and the ischium and compression of the QF, which causes chronic pain in the buttock (10). IFIS with cartilaginous exostosis at the lesser trochanter has been reported (11), but there are few reports of IFIS caused by solitary osteochondroma.

For diagnostic purposes, an X-ray of IFIS revealed a reduced distance between the osseous prominences of the lesser trochanter and the ischium and an osteochondroma on the lesser trochanter. When radiographs showed normal findings, the diagnosis of IFIS was confirmed by MRI of the pelvis, which showed narrowing of the IFS or QFS and edema of the QF. The IFS is usually defined as the minimum distance between the lateral cortex of the ischial tuberosity and the medial cortex of the lesser trochanter, while a distance less than 17 mm indicates an abnormal finding. The QFS is the minimum space with passage of the QF between the superolateral surface of the hamstring tendons and the posteromedial surface of the distal iliopsoas tendon, and QFS less than 8 mm represents an abnormal finding (7,15). When the QF develops edema, fatty replacement, or atrophy, narrowing of these spaces can occur.

Similarly, narrowing of the IFS and the QFS can compress the QF, further leading to edema and atrophy (16). MRI examination enables precise assessment of the degree of IFS and QFS stenosis and the degree of muscular edema/fatty replacement and atrophy (12). Radiologists should be aware of the radiographic features of this syndrome.

CR is a newly developed reconstruction technique for three-dimensional visualization of volumetric imaging data, providing clearer images of vascularized structures and contrast-enhanced blood vessels, tissues, and bones and describing complex anatomical structures more accurately. CR images contain dynamic and continuous information of the lesion, from the surface to the interior. This technique can greatly improve the exchange of information between clinicians and radiologists or between clinicians and patients.

Osteochondroma arising from the lesser trochanter is one of the causes of IFIS, the diagnosis of which should be considered when QF edema combined with narrowing of the IFS and QFS is observed. Radiography may be useful for detecting osteochondromas, but cannot evaluate the secondary effect on the soft tissue. MRI is the preferred tool for direct assessment of both narrowings of the IFS and the associated soft tissue edema in the QF. Moreover, CR can provide more photorealistic images to evaluate the narrowing of the bony ischiofemoral tunnel and edema or atrophy of the QF. Therefore, the use of multiple approaches for imaging examination can provide a better assessment of IFIS.

Conflicts of Interest: All authors have completed the ICMJE uniform disclosure form (available at https://dx.doi.org/10.21037/qims-21-525). The authors have no conflicts of interest to declare.

Ethical Statement: The authors are accountable for all aspects of the work in ensuring that questions related to the accuracy or integrity of any part of the work are appropriately investigated and resolved. All procedures performed in studies involving human participants were in accordance with the ethical standards of the institutional and/or national research committee(s) and with the Helsinki Declaration (as revised in 2013). Written informed consent was obtained from the patient for publication of this case report and accompanying images. A copy of the written consent is available for review by the editorial office of this journal.