Hemophilia is an X-linked inherited disorder primarily affecting males, its major types are type A (deficiency in factor VIII) and B (deficiency in factor IX) and is considered to be the most common severe congenital coagulation factor deficiency (1). Its estimated prevalence is 17.1 cases/100,000 males for all severities of hemophilia A and 3.8 cases/100,000 males for all severities of hemophilia B (2). Together with atrial fibrillation, there is a possible higher risk for coronary artery disease (CAD) in hemophilia and its incidence is increasing due to the fact that life expectancy of hemophilia patients approximates that of the general population (3,4). However, CAD mortality in hemophilia is lower compared to that of the general population possibly due to the protective effect on thrombus formation of the existing hypocoagulable state (4). Outcome of treatment for cardiovascular disease is similar to that in the general population in hemophilia (5). Moreover, no differences in cardiovascular comorbidities and their earlier onset could be demonstrated in hemophilia A compared to controls (6). Although lot of facts are known about cardiovascular diseases and the risk in hemophilia, no clinical data are available about hemophilia-related potential changes in myocardial mechanics.

Myocardial mechanics is highly dependent not only on cellular dysfunction, but also on left ventricular (LV) hypertrophy, fibrosis and wall stress (7). Hemostatic mechanisms are altered in hemophilia, which plays a major role in maintaining the structural and functional integrity of the vascular system, theoretically having effects on myocardial mechanics as well via changing wall stress (shear stress) (8). In all disorders in which any of these parameters are affected, theoretically myocardial mechanics could change. LV rotational mechanics is an important part of the LV pumping function showing early alterations in several disorders (9,10). Three-dimensional (3D) speckle-tracking echocardiography (3DSTE) is a new clinical tool with the ability of non-invasive analysis of LV rotational mechanics using digitally acquired 3D “echocloud” to create a virtual cast of the LV (11). The present study was designed to test whether any differences in LV rotational mechanics could be demonstrated between male patients with hemophilia and healthy controls using 3DSTE-derived virtual LV model.

The present study consisted of 17 patients with hemophilia, who were recruited on voluntary bases prospectively from the outpatient clinic of our tertiary Hematology Division, Department of Medicine, University of Szeged, Hungary. None of them had any known cardiovascular disorder. Due to insufficient image quality, 3 patients with hemophilia were excluded. In the remaining 14 patient population, 12 patients had hemophilia A and 2 patients had hemophilia B (mean age: 42.2±18.9 years, all males). From cardiovascular risk factors, 3 patients had hypertension, 2 patients showed hyperlipidaemia and 1 subject had type 2 diabetes mellitus. One patient was obese, smoking was present in 2 cases. All above mentioned risk factors were managed with mono- or combined therapy. Although none of the subjects had any known cardiovascular disease, hepatitis C virus (HCV) positivity was present in 8 subjects and hemophilic arthropathy was diagnosed in 6 patients. Diagnosis was established in infant age in all cases. Symptoms were mild in 6 cases and severe in 8 subjects. Factor level was below 1% in 7 cases and 4% in 2 cases, 6% in 1 case, 9% in 2 cases, 10% in 1 case, 29% in 1 case, respectively. Therapy was based on demand in 7 patients and was prophylactic in 7 subjects. The mean dose of factors was between 1,000–6,000 U/week for each patient. The control group comprised 16 age-matched healthy subjects (46.0±5.9 years, all males). A subject was considered to be healthy, if he/she had no symptoms or cardiovascular risk factors, no history of chronic disease or medication use, had a negative physiological examination and routine electrocardiography (ECG) and echocardiography showing normal results.

Complete two-dimensional (2D) Doppler echocardiographic examination and 3DSTE were performed in all patients with hemophilia and controls by the same sonographer (ÁK). The presented work is a part of the Motion Analysis of the heart and Great vessels bY three-dimensionAl speckle-tRacking echocardiography in Pathological cases (MAGYAR-Path) Study, which aimed to assess diagnostic and prognostic value of 3DSTE-derived LV rotational parameters among others in different disorders including hemophilia (“magyar” means “Hungarian” in Hungarian language). The local institutional ethical committee approved the study, which complied with the ethical guidelines set in the 1975 Declaration of Helsinki (and updated versions) and all patients and controls gave informed consent. 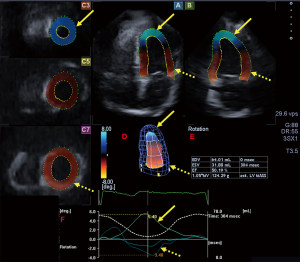 Variables were presented as mean ± standard deviation or frequencies and percentages (%). Normality of distribution was assessed by Shapiro-Wilks test, while homogeneity of variances was tested by Levene’s test. In case of normally distributed datasets, Student’s t-test was performed, in case of not-normally distributed datasets, Mann-Whitney Wilcoxon test was used. GPower 3.1.9 Software (Heinrich-Heine Universität, Düsseldorf, Germany) was used to calculate power: in the presence of effect size: 0.8, alpha: 0.04, power: 0.8, the minimum group size is n=13. Intraobserver and interobserver variability were assessed by intraclass correlation coefficient (ICC) determination. Group comparisons were performed by Student’s t-test and Fisher’s exact test, when appropriate. Two-tailed P value <0.05 was used to establish statistical significance. MedCalc software was used in all statistical analyses (MedCalc, Inc., Mariakerke, Belgium).

3DSTE is one of the most recent developments in cardiovascular imaging with capability of virtual 3D-model-based volumetric and functional assessment of heart chambers and valvular annuli (11,15,16). It provides a non-invasive, fast and easy-to-learn opportunity to perform 3D analysis of the atria and ventricles. While mathematical formulas are used for LV measurements during M-mode and 2D echocardiography, an accurate 3D cast of the LV is created in the course of ECG-gated 3D endocardial tracking during 3DSTE leading to a true volumetric chamber quantification (17). It is known that 3DSTE-derived LVEF is somewhat lower compared to M-mode or 2D echocardiography-derived values due to underestimated LV volumetric parameters, where EDV is more affected than ESV resulting in a lower 3DSTE-derived LVEF (18,19). Over volumetric measurements, quantitative features of contractility of heart chamber walls represented by LV strains could also be measured in certain directions (radial, longitudinal and circumferential) in the 3D space using the same LV cast (11,15-17).

Moreover, there is a complex movement of the LV during the cardiac cycle called LV rotational mechanics, which could be analysed in detail by the recently developed 3DSTE. In general, the base of the LV rotates in clockwise direction, while the LV apex rotates in counterclockwise direction in systole, which is followed by rapid untwisting in diastole in normal circumstances (9,10). This sort of special and sensitive “towel-wringing”-like LV motion is called LV twist and it is responsible for remarkable part of the ejection. Physiologically, it is based on the helical arrangement of the myocardial fibers: while subendocardial myocardial fibers are right-handed, subepicardial ones are left-handed with dominant effects on LV rotational mechanics due to their larger radius (9,10). LV rotational mechanics seem to be sensitive movement that are affected by aortic elasticity and stiffness, balance of contraction of subendocardium and subepicardium, orientation of myocardial fibers and degree of myocardial contraction and relaxation even in healthy subjects (9,13). Calculation of 2D echocardiography-derived LV twist is not suggested by the most recent guidelines due to the fact, that LV twisting mechanism is a 3D motion of the LV, therefore its 2D projected measurement would be far from the reality (9,20). Therefore, 3DSTE, which is able to measure the exact degrees of LV rotation of each LV segments/regions and global LV twist from a single acquisition, seems to be the optimal solution.

The most important finding of the present study is that significant 3DSTE-derived LV rotational abnormalities could be demonstrated in patients with hemophilia. Although a small number of patients were examined, reduced apical LV rotation and twist were found in hemophilia. Moreover, one patient showed LV-RBR. The correct explanation is not obvious, but decreased LV twist and apical rotation should be considered as a fine compensational mechanism related to hemophilia-related hemostatic changes and related alterations in wall stress/shear stress. It is strengthened by a recent study from the MAGYAR-Path Study, where only certain regional LV circumferential strains (CSs) proved to be reduced in hemophilia, global and mean segmental LV strains and other regional LV strains did not differ between patients with hemophilia and matched controls (21). Due to known relationship between LV-CS and LV twist, fine settings of LV mechanics via LV apical rotation could be theorized due these abnormalities in hemophilia. However, other factors like vascular functional alterations, the effects of concomitant cardiovascular risk factors, or other factors could also not be excluded (4,8,22). According to recent findings, hypertension was found to be a frequent finding in hemophilia with some increase in septal thickness and changes in diastolic function (23). Forty-three percent of our patients had hypertension, which is known to be associated with increased LV twist, which further strengthen our theories (24). In a recent study, children with severe hemophilia A showed higher arterial stiffness, and myocardial performance index, whereas the ejection time was shorter than in the control group (22). Similar alterations in LV rotational mechanics could be detected in other hematological disorders as well including hypereosinophilic syndrome and amyloidosis with larger ratio of patients with LV-RBR (25,26). However, further studies are warranted in a larger patient population to confirm our findings.

The following important limitations should be considered when interpreting the results. Hemophilia is a rare disease, therefore only limited number of patients could be collected and involved in the study from the tertiary center for patients with hematological disorders of our university responsible for the treatment of South-East Hungary. The present study aimed to analyse 3DSTE-derived LV rotational mechanics in hemophilia. Neither chambers other than the LV, nor LV strains featuring LV contractility were aimed to be assessed by 3DSTE (11). Several technical limitations are known to affect 3DSTE including low temporal and spatial resolution (11,15,16). Some adult hemophilia patients had risk factors and/or were treated with factor replacement therapy to prevent bleeding, which could theoretically have effects on findings.

Conflicts of Interest: All authors have completed the ICMJE uniform disclosure form (available at https://dx.doi.org/10.21037/qims-21-30). AN serves as an unpaid editorial board member of Quantitative Imaging in Medicine and Surgery. The other authors have no conflicts of interest to declare.

Ethical Statement: The authors are accountable for all aspects of the work in ensuring that questions related to the accuracy or integrity of any part of the work are appropriately investigated and resolved. The study was conducted in accordance with the Declaration of Helsinki (as revised in 2013). The study was approved by institutional ethics committee of the University of Szeged (NO.: 71/2011) and informed consent was taken from all the patients.