Calciphylaxis diagnosis is challenging, for which skin biopsy is a gold standard. Nonetheless, it increases the risk of ulceration, bleeding, and necrosis owing to deep incisions (2). A noninvasive tool for diagnosing calciphylaxis lesions is beneficial for patients with skin lesions and CKD.

The potential usefulness of noninvasive radiology, including plain radiography and bone scintigraphy, has been reported, whereas the usefulness of computed tomography (CT) has not been assessed (3-5). We hypothesized that histological changes, covering vessel calcification, thrombosis, interstitial calcium deposits, and adipose tissue remodelling, in the subcutaneous tissue of calciphylaxis lesions (1,2,6-8) would be reflected in the CT value and texture adopting the radiomic method, which is a high-throughput approach using image features calculated from histogram and texture analysis (9,10).

Hence, this research aims to develop and test a CT-based radiomic model for noninvasive detection of calciphylaxis in patients with CKD.

This retrospective, cohort study was conducted in accordance with the Declaration of Helsinki (as revised in 2013) and was approved by the local institutional ethics review board. Additionally, the need for written informed consent from the participants was waived.

In the next step, CT scan data involving lesion location was searched. For instance, if one patient had ulceration in the right leg, the researcher would find lower extremities’ non-contrast CT images in Picture Archiving and Communication Systems. All CT scan followed routine CT scan protocols.

Nevertheless, for limited negative cases, based on the hypothesis, Patients with CKD underwent dialysis during the same time period with abdominal CT, who displayed no features of calciphylaxis comprised the non-calciphylaxis cohort (CKD-non-calciphylaxis) (Group III), so as to extract radiomics features about subcutaneous tissue.

The training cohort comprised 70% of patients randomly selected from those with calciphylaxis and all non-calciphylaxis patients with CKD.

The independent test cohort consisted of the remaining 30% of patients with calciphylaxis and all patients suspected of having calciphylaxis. There was no overlapping between training and test data.

Figure 1 displays the pipeline of the radiomic model with the feature extraction and model building on each lesion unit.

The CT images containing the lesion patches were segmented using 3Dslicer (version 4.10.0; https://www.slicer.org/) (Figure 1). As determined by an experienced nephrologist and radiologist based on photos or records, a 50×50×50 mm3 box was placed in the area of the lesion for patients with calciphylaxis and those suspected of calciphylaxis. For CKD-non-calciphylaxis patients, 2 boxes of the same size were placed at the L3 vertebra of their backs. Apart from muscle and bone in the box, all subcutaneous tissues would be segmented as lesion patches.

In the first step, all images and masks were resampled to form isotropic voxels of unit dimension with 1 voxel corresponding to 1 mm3 to guarantee comparability. By centring the image at the mean with a standard deviation and re-charting the histogram to conform to l±3r (l: the average grey level within the VOI; r: the grey-level standard deviation), image normalization was realised.

For each lesion, there were a total of 774 features. In accordance with pyradiomics, both first-order and textural features were calculated from the original images and those with the wavelet filter (14).

Normalisation was applied to the feature matrix with each vector featured with a zero centre and standard deviation.

To reduce the space dimensionality of the feature, the Pearson correlation coefficient (PCC) of the feature pair was adopted. Subsequently, Relief was employed to identify the features most closely correlated with the outcome, selecting the sub dataset and finding relative features according to the label by recursion.

The model and the robustness of the extracted features were built and verified, respectively, through two different supervised learning algorithms, namely the support vector machine (SVM) and the logistic regression (LR) (15). The former searches the hyper-plane to label the cases by mapping the features in a higher dimension, whereas the latter is deemed as a linear classifier via penalised maximum likelihood. Moreover, the linear kernel was used for explicable feature coefficients in the SVM model. In the training course, the 5-fold cross-validation of the training dataset was conducted to confirm the model’s performance.

In line with the method described in Chilamkurthy et al. (16), high specificity and sensitivity points were selected from the receiver operating characteristic (ROC) curve of the training dataset.

Since the diagnostic performance of plain radiography (presence of vascular calcification in lesion peripheries) and bone scintigraphy in the test dataset was assessed, the AUCs of the radiomic model were compared with those of other radiological methods through the Delong test.

To determine the ability of the model to identify the calciphylaxis lesion in CKD patients, rather than classify the extremities and abdomen tissue: (I) this research did not extract shape-based features and designed three verification studies. (II) prior to study, it researched the abdomen CT scan at the time of initial diagnosis in the test dataset.

Study I: there was a comparison between the results of the suspected lesion and L3 subcutaneous tissue in suspected calciphylaxis patients.

Study II: there was a comparison between skin lesion and L3 subcutaneous tissue in calciphylaxis patients. Patients with skin lesion in the back would be excluded.

In order to assess the patients’ clinical and demographic characteristics, the Chi-square test (or the Fisher's exact test if necessary) was conducted to assess categorical variables, while the Mann-Whitney test was used for evaluating continuous variables in SPSS (version 22.0. IBM Crop. Armonk, NY, USA). Then, feature selection and model establishment were realised through FeAture Explorer (FAE, v0.2.5, https://github.com/salan668/FAE) on Python (3.6.8, https://www.python.org/). Furthermore, SPSS and Python were employed to calculate test values including the AUCs with 95% confidence interval (CI), the sensitivity, and the specificity. The Delong test was performed using the “pROC” package (R language 3.0.2, R Core Team, 2013), and a statistically significant P value should be smaller than 0.05.

Baseline demographic and clinical characteristics of patients are outlined in Table 1. No dramatic differences existed in all baseline characters (P>0.05). The location of the skin lesions and CT scan of patients in Group I and II are listed in Table 2. 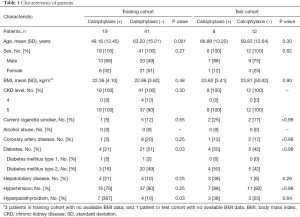 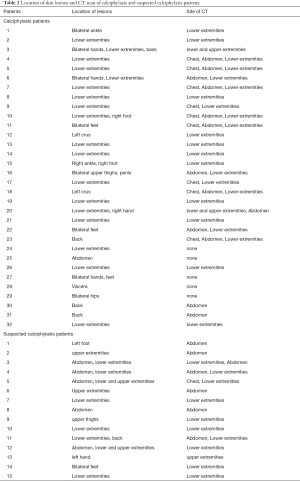 Performance of the radiomic model

The model, based on 8 features including 4 first-order features and 4 textural features, showed the highest AUC on the validation data set. Significant features and coefficients utilised in the models are manifested in Table S1. 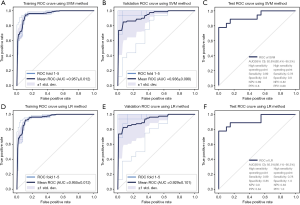 In this retrospective study, it proposed the radiomics method and demonstrated the effectiveness of the noninvasive machine learning technique in diagnosing skin lesions in patients with calciphylaxis (Figure 2).

Calciphylaxis diagnosis is challenging. In the test dataset, radiomic models performed well for diagnosing calciphylaxis in CKD patients, which was better than conventional radiology methods such as plain radiograph and bone scintigraphy (Table 3), the performance of which was similar to that in previous studies (3,5). The exploration of diagnostic models has confirmed the possibility of a non-invasive diagnosis method that might provide clinicians with an alternative when histopathological examination is impossible and thereby reducing the incidence of complications due to invasive operations, especially at the skin lesions (2). However, bone scintigraphy also showed high specificity based on our dataset (0.82), while its sensitivity was 0.5. Specificity in this study is comparable to that in the research of Paul et al. (0.97) but the sensitivity is much lower (0.89) (5). However, a more accurate noninvasive method can be provided for calciphylaxis diagnosis by combining radiomics methods on CT and bone scintigraphy.

Secondly, the radiomics and machine learning methods were adopted in this study, which are popular in disease diagnosis and prognosis prediction (9). In the models, 50% of the features included were first-order, while the rest were second-order. Nevertheless, they showed a potential to detect inflammation, fibrosis, and vascularity in adipose tissue, and made the model more robust by being less sensitive to an absolute value (17,18). Similarity in AUC, sensitivity and, specificity for SVM and LR methods demonstrated the robustness of the same radiomic features, based on the prior studies’ result that the classification method played the most dominant role in the variability of model (15).

This research has several limitations. It was a retrospective study, and given the low morbidity of calciphylaxis, a small sample size of both patients and controls was enrolled. In the meantime, this research selected a special dataset of negative cases and lesions in training, which might give rise to selection bias. Secondly, this is a single-centre study, and model performance could be different in a large population and other centres. Future studies should explore and validate the noninvasive methods for diagnosis of calciphylaxis in more patients and centres including both imaging-based and serum-based methods.

To the best of our knowledge, this research is the first to develop a radiomics method in calciphylaxis diagnosis. CT radiomics features hidden within skin lesions were extracted and the radiomic model demonstrated preliminary feasibility as a noninvasive technique for calciphylaxis diagnosis in patients with CKD when invasive procedures are not available.

Conflicts of Interest: All authors have completed the ICMJE uniform disclosure form (available at https://dx.doi.org/10.21037/qims-20-1211). The authors have no conflicts of interest to declare.

Ethical Statement: The authors are accountable for all aspects of the work in ensuring that questions related to the accuracy or integrity of any part of the work are appropriately investigated and resolved. This retrospective, cohort study was conducted in accordance with the Declaration of Helsinki (as revised in 2013) and was approved by the local institutional ethics review board. Additionally, the need for written informed consent from the participants was waived.