Minimizing the electromagnetic (EM) coupling among coil elements is critical to RF coil array designs, given that better decoupling could lead to higher SNR and better parallel imaging performance. In telecommunication applications, a large amount of studies have been focused on reducing the coupling of monopole and dipole antennas. In references (19,20), different kinds of metamaterials were applied to decouple two nearby monopoles. Above from that, hybrid couplers using L/C network or microstrip line approach (21,22) have been used to achieve port decoupling for monopole or dipole antennas. All these methods could suppress the coupling effect, but suffer from complicated structures and might not be suitable for MRI applications.

In reference (23), a decoupling structure using a phase shifter and a bridge capacitor was successfully implemented to diminish the coupling between two printed monopoles. In MRI applications, tunable decoupling networks are preferred since different imaging samples or loads might cause the change of mutual coupling, consequently the fine adjustment of decoupling circuit is often needed. Since phase shifters are not easy to adjust in practice, this approach might not be suitable in MRI applications. In this study, we proposed a combined decoupling and matching network (DMN) for radiative coil arrays in ultrahigh field MRI, providing a convenient approach to feed and decouple radiative RF arrays. 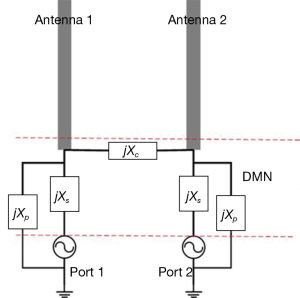 Since Xc affects the odd but not the even mode, it can be used to make the odd mode impedance approach to the even mode impedance. In some special cases where the coupling is totally reactive, the even and odd mode impedance at the new ports can be equal to each other, which means that the new ports are decoupled. In general cases, a more complex network, e.g., T-shaped or π-shaped network, is needed for decoupling (24). In this study, Xp was partly used to form a π-shaped network with Xc for port decoupling, and partly used to form an L-shaped network with Xs for port matching.

In order to verify the proposed design, a 2-channel monopole array with DMN is numerically computed using ANSYS HFSS, as shown in Figure 2. The width and length of each monopole element are 1 cm and 25 cm, respectively. The distance of the two monopole elements is about 6 cm. A cylindrical water phantom with an outer diameter of 16 cm and a length of 30 cm is placed 2 cm below the monopole elements. The EM parameters of the water phantom are set as follows: conductivity σ =0.59 s/m; relative permittivity; εr =78. 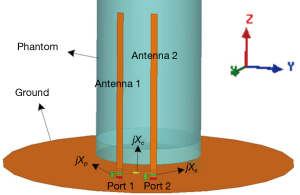 Figure 2 Simulation geometry of two monopoles with the DMN. The width and length of each monopole is 1 cm and 25 cm, respectively. The distance between the two monopoles is about 6 cm. DMN, decoupling and matching network.

For comparison, we also simulated a 2-channel monopole array without decoupling treatments and a single monopole. Values of all reactive components were obtained by RF circuit co-simulation method (25,26). The operate frequency is 297.2 MHz, which is the Larmor frequency of our unitized 7T MRI scanner.

Figure 3 depicts the frequency response of the magnitudes of the S-parameters, with S11 and S21 representing reflection and mutual coupling, respectively. The values of reactive components used are as follows: Xc =6.6 pF, Xs =13.5 pF, Xp =71.9 nH. Figure 3A,C show the S-parameter of two coupled monopoles. As can be noticed, mutual coupling between the monopoles is nearly −5 dB at desired frequency when both monopoles are matched. With the proposed DMNs, ports 1 and 2 are well decoupled (−24.8 dB) and matched to 50 ohm (Ω) simultaneously, as shown in Figure 3B,D. It is worth noting that the S11 bandwidth of decoupled monopoles is rather small. This is partly due to the changing self-impedance, and partly due to the changing radiation pattern of the monopoles. 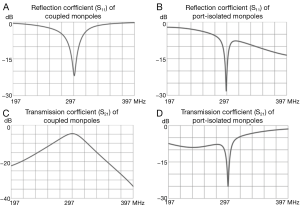 We also evaluated the normalized noise matrixes (Ψ) of the two arrays by calculating Eq. [1] and [2] (27), where Ekm is the local electric field of voxel k from channel m, σk is the local conductivity of voxel k, ∆x, ∆y and ∆z are the voxel size in x, y, and z directions. In this study, the voxel size for noise matrix calculation in x, y, z directions is 2, 2 and 5 mm, respectively. The noise correlation of the monopole arrays without decoupling treatments and with the proposed DMN are 0.41 and 0.15, respectively.

Figure 4 shows the current distribution of two monopole elements when only port 1 was excited with 1W power. Figure 4A shows the current distribution of the two close-spaced monopoles without decoupling treatments. Arrows in red color indicate the current directions along the monopole elements. It is obvious that the current flows into port 2 and the right monopole, leading to strong EM coupling between two ports. When the decoupling network was added, however, the induced current becomes almost zero at the feed-point of the right monopole, as shown in Figure 4B. This has also been validated by S-parameter results as described above.

From Figure 4B, it is also seen that not the monopole elements but the ports are decoupled. That means both monopole elements are excited when only one port is fed. The current distribution of the two-element array is characterized by “large” currents flowing in opposite directions. Similar results have also been observed in previous study (28). 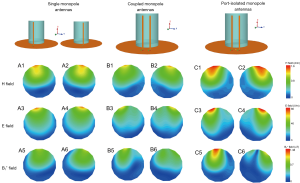 As expected, part of the power was transferred to the other monopole element when no decoupling treatments were used, as shown in Figure 5A,B. The field result is consistent with the S21 result as described above (about −5 dB). It is worth noting that the electromagnetic fields of decoupled monopole elements are still different from that of single monopole even though the S21 is as low as −24.8 dB, as shown in Figure 5A,C. This also indicates that the proposed method is a port decoupling method rather than an element decoupling method.

In summary, by applying the proposed L/C network, the port isolation between two monopoles can be improved from −5 dB to −25 dB meanwhile excellent matching performance can also be attained. In the conventional approaches, decoupling network and matching network are separated which increases the circuit complexity. In this study, we utilized a combined DMN and thus the number of required components can be minimized. Since less number of tuning components is required, this design is advantageous to MRI applications.

It is noted that the proposed method is a port decoupling approach rather than an element decoupling approach. Therefore, the electric and magnetic fields of the decoupled monopole are different from those of single monopoles. This feature can be seen from Figure 4 that the two monopole elements with decoupling network have a similar current distribution as the loop coil, with currents on two conductors flow in different directions. This makes the H field and B1 field strong at the peripheral area on the phantom, as shown in Figures 5C1-C6.

Funding: This study was supported in part by the National Natural Science Foundation of China Grant (51228702) and National Institutes of Health (NIH) R01EB008699.