Since its introduction in 2009, feature tracking (FT) has become an innovative tool in the growing armamentarium of CMR. It allows for the quantitative assessment of deformation characteristics (strain, strain rate, displacement and velocity) on global and regional level. Global indices—especially global longitudinal strain (GLS)—have been applied in research extensively and could prove their diagnostic and prognostic significance in various structural cardiac diseases, as well as in ischemic heart disease and STEMI (4-8). Regarding regional strain, the available evidence is less conclusive. There is a limited number of studies assessing regional strain (mostly in circumferential and radial orientation) in acute myocardial infarction patients. Results have in part successfully been correlated to other imaging surrogates, such as wall thickening or presence of microvascular obstruction (9-11). Yet, there is no reference standard for regional strain assessment and reporting. Consequently, different imaging sequences and post-processing methods have been used, leading to heterogenous results. The role of regional strain assessment in acute myocardial infarction thus remains unclear.

In our study, patients with acute reperfused STEMI underwent a comprehensive CMR protocol at baseline and follow-up. The objective was the description of regional strain characteristics in the acute and chronic phase of the infarction and the correlation of the results to clinical features and other imaging derived surrogates.

The study population has been derived from the previously published Abciximab Intracoronary versus Intravenously Drug Application in STEMI (AIDA STEMI) trial (12). In brief, AIDA STEMI was a randomized, open-label, multicenter trial (registration at ClinicalTrials.gov under NCT00712101). We present data from patients enrolled at the University of Ulm between September 2008 and April 2011. Patients presenting with acute STEMI (symptom-to-balloon time <12 h) were enrolled and assigned in a 1:1-fashion to intracoronary versus intravenous abciximab bolus during percutaneous coronary intervention. The primary endpoint was the composite of all-cause mortality, recurrent infarction, or new congestive heart failure within 90 days of randomization. Patients with history of myocardial infarction or previous surgical revascularization were excluded. The study was conducted in accordance with the Declaration of Helsinki (as revised in 2013). The study was approved by institutional ethics board of Ulm University (NO.: 15/18) and individual consent for this retrospective analysis was waived.

Within the AIDA STEMI trial, a CMR substudy was conducted, consisting of 795 patients enrolled at 8 centers. For the present study, patients recruited at the University of Ulm were retrospectively analyzed. All patients received a comprehensive CMR examination 1 to 10 days after the index event and at follow-up approximately 6 months later. CMR studies were conducted on a 1.5T whole-body scanner with dedicated cardiac 32 phased-array receiver coil (Philips, Best, the Netherlands). Details on the CMR protocol have been published earlier (13). It comprised the thorough assessment of right and left ventricular function, mass and volumes, as well as the analysis of tissue characteristics such as myocardial salvage index, infarct size, and presence and extent of microvascular obstruction.

Validated CMR evaluation software was used for all quantitative analyses including strain assessment (cmr42 version 5.6.5, Circle Cardiovascular Imaging Inc., Calgary, Alberta, Canada). Regions of infarcted myocardium were detected on short axis images using a semiautomated computer-based threshold approach (14). In principle endocardial and epicardial contours were delineated manually in the 3D short axis stack. Afterwards, a region of interest was drawn in remote, i.e., non-infarcted myocardium. By using the 5 standard deviation threshold technique, infarcted myocardium was detected automatically by the software. Manual correction was performed where necessary to avoid signal contamination by epicardial adipose tissue. Results were reported as a percentage of left ventricular volume according to the 16-segment model of the American Heart Association (15). Deformation parameters (i.e., strain, strain rate, displacement and velocity) were assessed by manual delineation of endocardial and epicardial contours on short-axis and corresponding long-axis cine sequences (16). Global indices as well as segmental values were calculated by the software. Papillary muscles were excluded from left ventricular mass, left ventricular outflow tract was excluded from left ventricular volumes. CMR analysis was performed by two experienced readers in consensus in all cases. Interobserver variability varied between 0.90 and 0.98 (intra-class correlation) for the different strain parameters.

Continuous variables were tested for normal distribution by the D’Agostino-Pearson test and reported as mean ± standard deviation or median with interquartile range (25th–75th percentile), respectively. For comparison, a two-tailed t-test was applied in case of normal distribution, otherwise the Mann-Whitney rank sum test was used. Correlation coefficients and regression analyses were calculated to evaluate relationships between continuous variables. A receiver operating characteristics curve analysis was used to calculate the ability of abnormal segmental radial strain to predict relevant myocardial necrosis.

The study population consisted of 51 patients. Mean age was 58.2±12.4 years, 42 patients were men (82.4%). Hypertension was present in 29 (56.9%) subjects, 6 patients had diabetes mellitus (11.8%). The culprit vessel was found in 22 cases (43.1%) to be the left anterior descending (LAD), in 24 cases (47.1%) the right coronary artery (RCA) and in 5 patients (9.8%) the left circumflex (LCX). Randomization assigned 23 subjects (45.1%) to the intravenous Abciximab bolus group, 28 patients (54.9%) received intracoronary Abciximab. All patients received guideline directed medical therapy. The frequency and distribution of cardiovascular risk factors, as well as clinical baseline characteristics are depicted in Table 1. 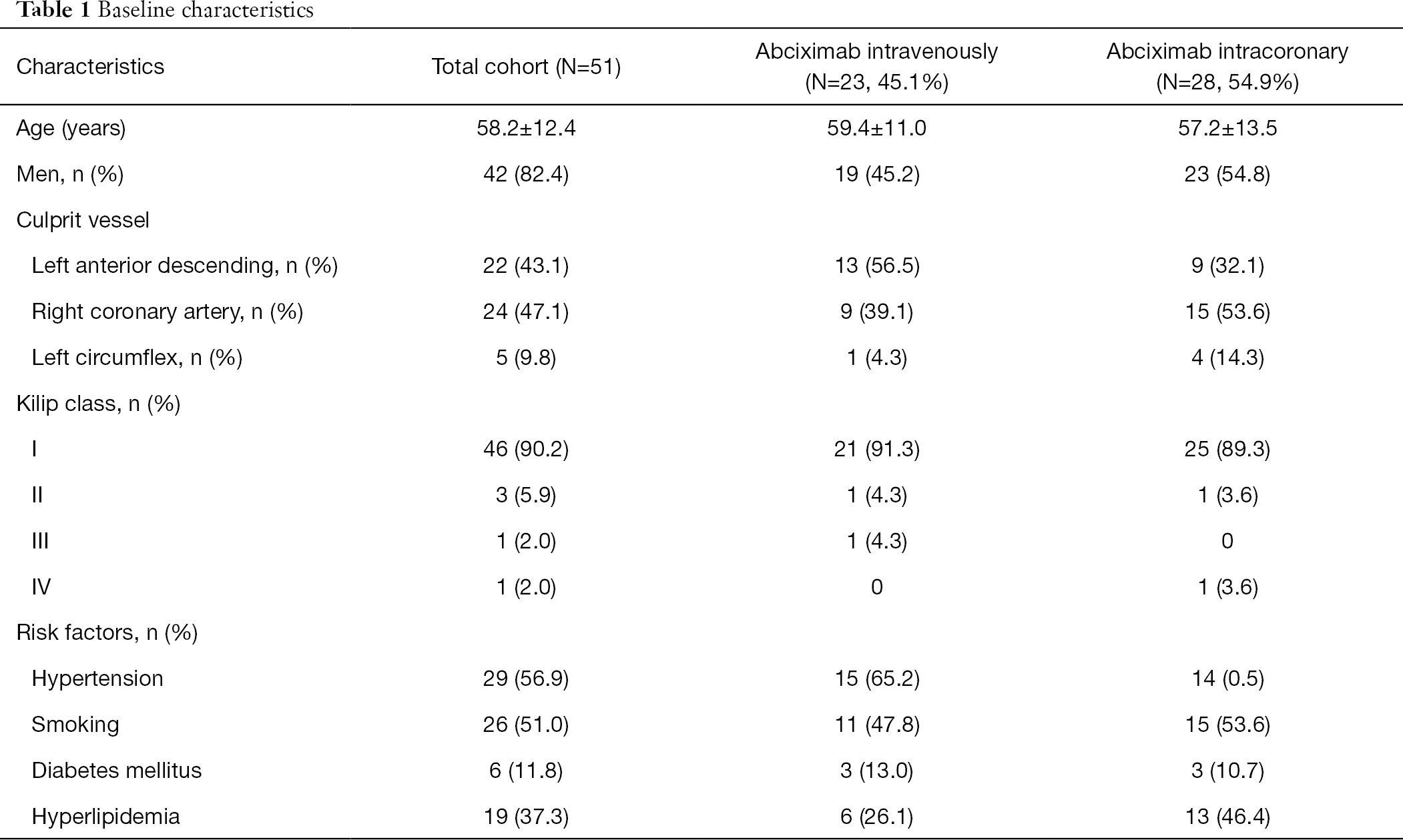 Symptom-to-balloon time was <12 h in all patients per study inclusion criteria. Median time was 199 min (130–279 min). Forty-six patients (90.2%) had Thrombolysis in Myocardial Infarction (TIMI) flow grade 3 after percutaneous intervention, 4 patients (7.8%) had TIMI flow grade 2 and in one subject (2.0%), TIMI flow grade 1 could be seen. There were no primary endpoints (composite of all-cause mortality, recurrent infarction, new congestive heart failure) within 12 months of follow-up. Table 2 depicts procedural characteristics and clinical outcomes.

The route of abciximab administration was not associated with differing clinical or CMR parameters, neither at baseline nor at follow-up (Table 5). 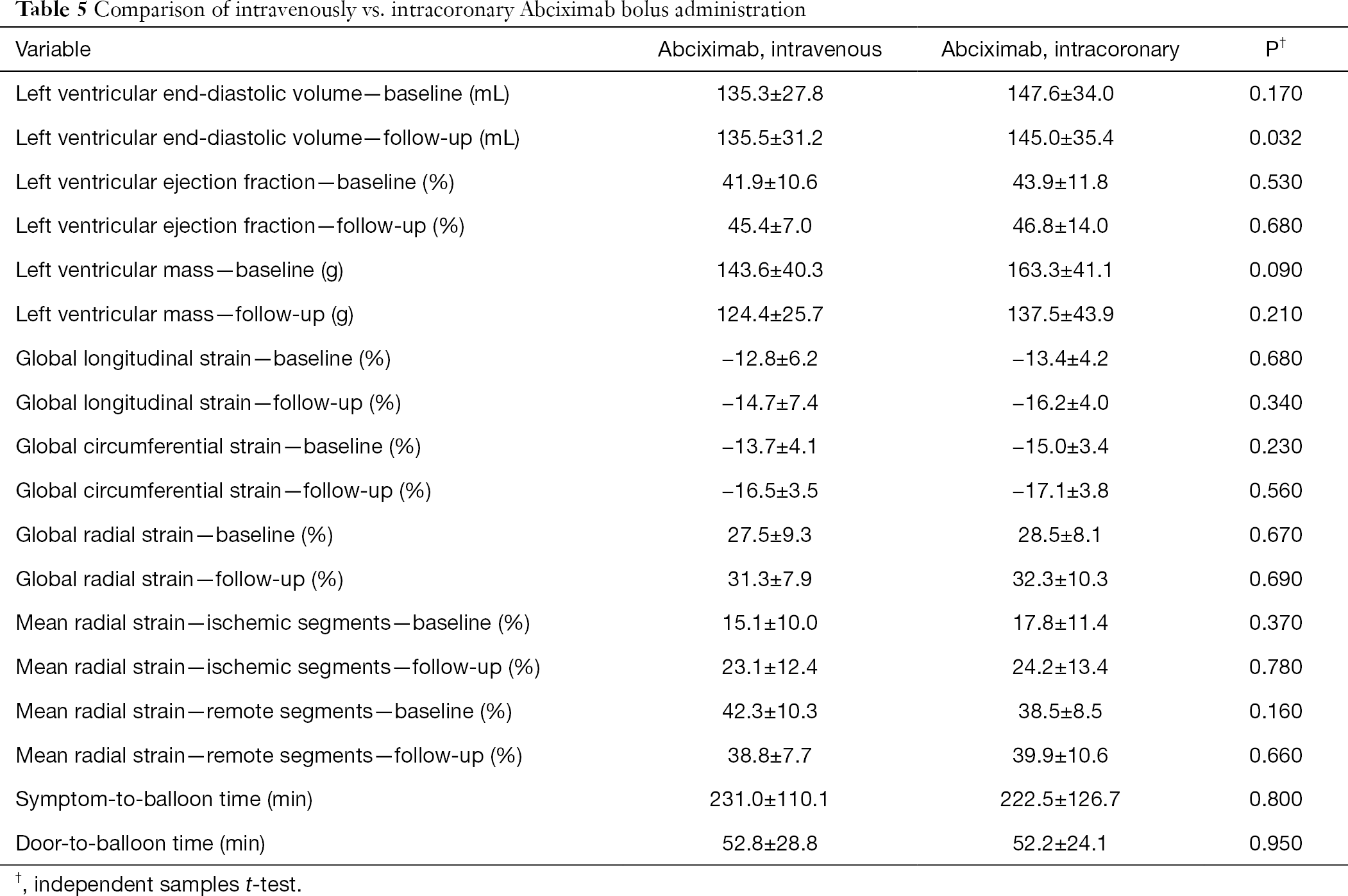 Regression analysis revealed a significant correlation between symptom-to-balloon time and mean radial strain of ischemic segments (P=0.013, Figure 1). Moreover, there was a significant correlation between acute phase radial strain and extent of late gadolinium enhancement at follow-up (P<0.001, Figure 2). Using a cut-off criterion of ≤27%, acute phase radial strain predicted a relevant infarction (defined as segmental late gadolinium extent ≥15%) with a sensitivity of 74.4% and a specificity of 69.0% (AUC 0.775, P<0.001). The corresponding receiver operating characteristics curve is depicted in Figure 3. 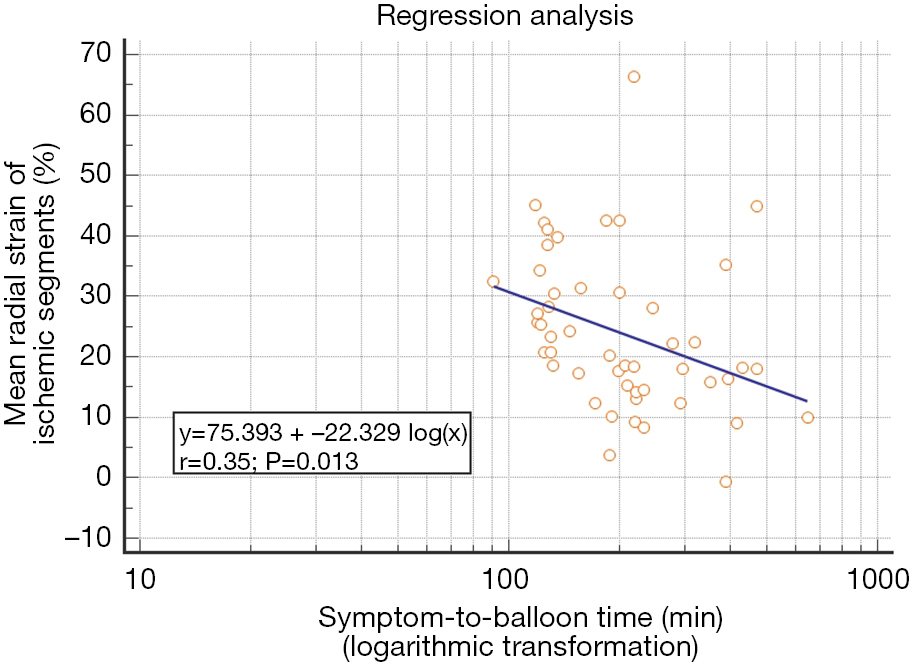 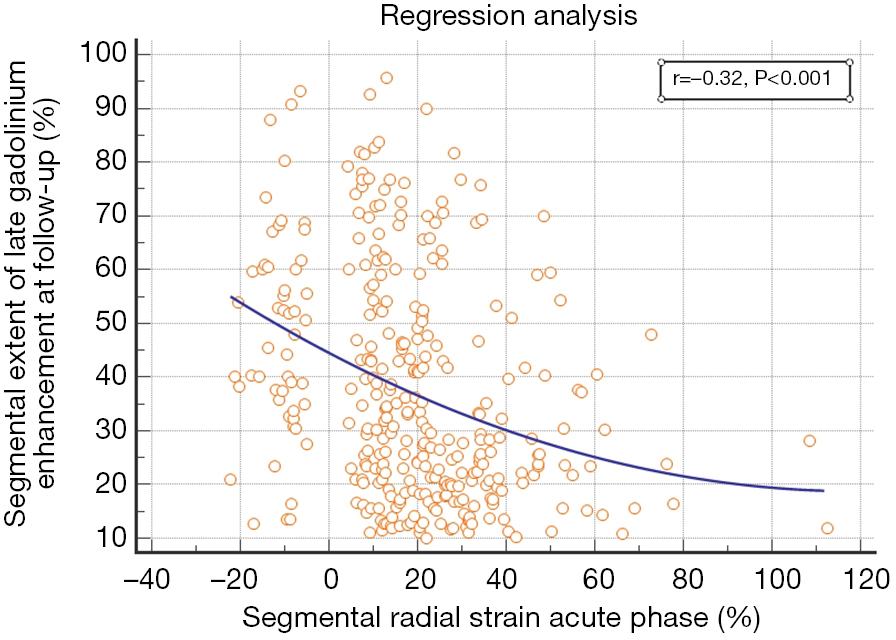 In this retrospective analysis of acute reperfused STEMI patients, CMR derived myocardial deformation characteristics are described at baseline and follow-up. Radial strain of ischemic segments was significantly reduced in the acute phase of infarction with a substantial recovery for all culprit vessels. Moreover, regional radial strain showed significant correlation to both symptom-to-balloon time and the extent of late gadolinium enhancement at follow-up, thus potentially serving as early surrogate for outcome and remodeling in STEMI patients.

Since its introduction in CMR, a growing number of studies have focused on the potential role of FT derived functional parameters in myocardial infarction. For global indices, especially global longitudinal left ventricular strain, there is a robust evidence base indicating strong prognostic value in this setting. For instance, a prospective observational study consisting of 451 revascularized STEMI patients demonstrated the incremental prognostic power of global longitudinal strain for the prediction of major adverse cardiac events when added to a prognostic model containing conventional risk factors such as left ventricular ejection fraction, infarct size and microvascular obstruction (17).

For regional strain, the situation is far less conclusive. Several studies sought to identify prognostic value of regional strain parameters but a uniform assessment and reporting still is lacking, in part due to relevant intervendor, intercenter and interobserver variabilities (16,18). A major study by Gavara et al. rigorously assessed global and segmental strain parameters in 323 STEMI patients from a large retrospective registry (19). The authors analyzed intra- and interobserver variabilities and proposed a reporting system based on AHA’s 16 segment model (19,20). In summary, they assessed cut-off values for each segment and strain direction in an external validation cohort. These cut-off values were then used to identify segments with “altered” strain in the study population. Finally, the number of altered segments was analyzed regarding endpoint prediction. Though the number of altered segments in all strain directions was associated with poor outcome, regional strain analysis did not sustain its prognostic value when combined with other potent CMR and clinical predictors. This finding might be a consequence of insufficient spatial resolution of just 16 myocardial segments, especially regarding segments adjacent to the myocardial infarction with a mixture of damaged and healthy myocardial tissue. In our study, a modified approach was therefore used. By using radial segmental strain as continuous variable, linear correlation to the extent of late gadolinium enhancement at follow-up could be demonstrated. Of note, receiver operating characteristics analysis in our cohort revealed a comparable cut-off for relevantly reduced segmental radial strain (27%) as compared to the study former mentioned (32%) (19). Prognostic value can be assumed but surely has to be examined in a larger and preferably prospective cohort.

Though analysis revealed a significant correlation between radial segmental strain and extent of late gadolinium enhancement at follow-up, a lot of scattering had to be observed. This issue was addressed in recent research comparing the performance of different FT CMR software packages in healthy subjects and patients with myocardial infarction (21). With their findings the authors confirmed the fact that interchangeability between the available vendors is not given and that reproducibility still needs improvement, especially for segmental strain analysis (coefficient of variation ranging from 15% to 90%). Nevertheless, radial segmental strain had the best test metrics so far, especially for the detection of regional left ventricular pathology (21). Our findings, in line with previous research, thus suggest segmental radial strain as preferred functional parameter for the detection and description of infarction related myocardial injury, probably by best reflecting the transmural damage that takes place in this setting (21,22).

The study cohort is too small to evaluate the prognostic impact of segmental radial strain in terms of major adverse cardiac events. In addition, all patients had 6 months follow-up MRI and thus no event was recorded in the study population within 12 months due to selection criteria (patients who experienced a “early” primary endpoint within 6 months after index event who were not able to have the second MRI were intentionally excluded). Furthermore, reproducibility at this point is insufficient, as pointed out before. Moreover, CMR derived strain measurements exhibit lower temporal resolution as compared to echocardiography, thus hindering exchangeability across different imaging modalities. Nevertheless, from a hypothesis generating point of view, our study legitimates further evaluation of this intuitive parameter in prospective STEMI cohorts.

In conclusion, feasibility of describing regional left ventricular function by FT CMR could be demonstrated. The correlation of segmental radial strain at the time of the infarction with either symptom-to-balloon-time and the extent of myocardial scar/necrosis at follow-up suggests this parameter to be used as early remodeling surrogate and prognostic tool in STEMI. Interchangeability between vendors and reproducibility must be improved substantially to facilitate application in clinical routine.

Conflicts of Interest: All authors have completed the ICMJE uniform disclosure form (available at http://dx.doi.org/10.21037/qims-21-56). The authors have no conflicts of interest to declare.

Ethical Statement: The authors are accountable for all aspects of the work in ensuring that questions related to the accuracy or integrity of any part of the work are appropriately investigated and resolved. The study was conducted in accordance with the Declaration of Helsinki (as revised in 2013). The study was approved by institutional ethics board of Ulm University (NO.: 15/18) and individual consent for this retrospective analysis was waived.