Connections between the systemic circulation and the pulmonary arterial systems are extremely rare. Multiple systemic artery-to-pulmonary artery (SA-PA) malformations, which can be congenital or non-congenital, are extremely rare in people without congenital heart disease. The non-congenital fistulas can develop in patients with inflammatory or infectious disease of the lung and pleura, cancer, or after trauma (1-3). Congenital SA-PA malformations can be detected in patients without any of the risk factors mentioned above. An SA-PA malformation can occur in single or multiple forms and connect the pulmonary vascular bed with the left internal thoracic and the left gastric arteries, the pericardiacophrenic branch of the left musculophrenic artery, the left bronchial artery, or others.

A 41-year-old female presented to the Pneumology Department with chest tightness, shortness of breath, and dyspnea lasting over 20 days. Physical examination was normal, and no abnormality was found in pulmonary function, cardiac ultrasound, and radiography (Figure 1A). The patient had experienced pulmonary tuberculosis 20 years ago, which had been cured by anti-tuberculosis treatment, and the latest chest computed tomography (CT) had shown no tuberculosis lesions. There was no obvious inducing factor for chest tightness, shortness of breath, dyspnea, and dizziness before attending the hospital.

At admission, electrocardiography and echocardiography showed normal results. According to the patient’s clinical symptoms, priority was given to the investigation of heart disease or vascular disease, so multi-slice spiral computed tomography angiography (MSCTA) examination was applied immediately, with CR to photo-realistically display the shape and number of vascular malformations. The CR revealed multiple connections between the bilateral internal thoracic arteries, right musculophrenic artery, and bilateral pulmonary artery branches (Figure 1B). This combination of features was highly suggestive of SA-PA malformation. The patient underwent conventional angiography for further investigation. Digital subtraction angiography (DSA) showed multiple anomalous communicating vessels from several systemic arteries to the pulmonary circulation, including the bilateral internal thoracic arteries and the right musculophrenic artery (Figure 2), which were consistent with the manifestation of multiple SA-PA malformations.

At the 2-year follow-up after embolization, the patient was asymptomatic and had no recurrence of clinical symptoms. However, MSCTA revealed slight hypertrophy of the right musculophrenic artery (Figure 3). Compared with the imaging results of the first review after embolization, this sign may have indicated the possibility of recurrence. 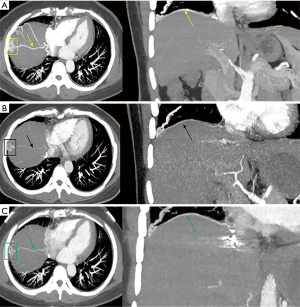 The study was conducted in accordance with the Declaration of Helsinki (as revised in 2013). Ethical approval was granted from the hospital’s ethics committee, and written informed consent was provided by the patient for publication of this case report and any accompanying images. A copy of the written consent is available for review by the Editor-in-Chief of this journal.

Pulmonary arteriovenous malformations are direct connections between a pulmonary artery and vein branch through thin-walled aneurysmal sacs (11). In this case, selective angiography and MSCTA demonstrated no direct venous connection with any of the arteries that formed the vascular malformation.

Pulmonary sequestration is defined as a mass of abnormal pulmonary tissue that cannot communicate with the tracheobronchial tree through a normally located bronchus and is supplied by anomalous systemic arteries (12). In this case, this patient could not have been considered to have pulmonary sequestration because there was no sequestered mass of lung tissue.

Multiple SA-PA malformations are extremely rare in people with normal pulmonary circulation, and the detection of abnormal blood vessels is an important guide for making clinical treatment plans. Although selective angiography is the gold standard for diagnosis, the MSCTA scan is a useful tool for diagnosis and can provide complete anatomical details of the vascular malformation, thereby providing a reference for formulating DSA or surgical strategies.

Currently, the management of SA-PA malformation is challenging and controversial. The SA-PA malformation can be treated by surgery, embolization, or it can remain under observation. Historically, surgery was the primary treatment for SA-PA malformation, including resection of the anomalous vessels, lobectomy, and pneumonectomy. Recently, transcatheter embolization for the connecting vessels has been performed as a less invasive alternative therapy (5). This patient’s vascular malformations were scattered and complicated, which might have caused complications such as pulmonary hypertension and massive hemoptysis, which can be life-threatening in the absence of timely treatment. However, radical removal of multiple reticular blood vessels may cause excessive bleeding during surgery (9). The risk of bleeding is directly related to the number of inflow arteries. After multidisciplinary team discussions, the risk of bleeding in surgical treatment was deemed high, and interventional embolization was also more difficult. Finally, the patient underwent interventional embolization in another hospital. However, this treatment is associated with recurrence, so repeated treatment might be required in the future. At the 2-year follow-up after embolization, this patient had no recurrence of clinical symptoms, while the MSCT imaging examination revealed slight hypertrophy of the right musculophrenic artery (Figure 3), signaling the possibility of recurrence. However, longer follow-up is needed to fully evaluate the efficacy of embolization.

In conclusion, DSA is the gold standard for diagnosing SA-PA malformation, but MSCTA can provide complete anatomical details of the vascular malformation, which may provide a reference for formulating treatment strategies. Additionally, CR can present CT volume data more photo-realistically and naturally.

Conflicts of Interest: All authors have completed the ICMJE uniform disclosure form (available at http://dx.doi.org/10.21037/qims-21-109). The authors have no conflicts of interest to declare.

Ethical Statement: The authors are accountable for all aspects of the work in ensuring that questions related to the accuracy or integrity of any part of the work are appropriately investigated and resolved. The study was conducted in accordance with the Declaration of Helsinki (as revised in 2013). Ethical approval was granted from the hospital’s ethics committee, and written informed consent was provided by the patient for publication of this case report and any accompanying images. A copy of the written consent is available for review by the Editor-in-Chief of this journal.