This case report describes a patient who experienced unexplained abdominal pain without obvious infection symptoms, which was found to be caused by a bamboo toothpick in the liver. Due to a lack of any special medical history and based on the patient’s symptoms, the presence of a foreign body was finally diagnosed by liver ultrasound and computed tomography (CT). The patient’s condition had been stable. This type of situation is rare.

A 55-year-old woman attended our hospital complaining that she had been experiencing paroxysmal right upper quadrant pain for 1 month. She reported that the pain only worsened with movement. She had no history of fever, weight change, trauma, or any other discomfort. On physical examination, there was tenderness to palpation across her right upper abdomen. No skin wounds, mass, or features of jaundice were found. Laboratory data revealed normal hemoglobin, leukocyte, C-reactive protein and liver enzyme levels, and platelet counts. However, an abdominal ultrasound confirmed the presence of a linear, highly reflective track in the right posterior lobe of the liver with sharp edges and no acoustic shadow (see Figure 1). An abdominal CT scan showed a hyperdense linear foreign body occupying segment VI of the liver. The adjacent liver tissue density was observed to have decreased slightly, and the limited posterior peritoneal was thickening. No thickening or perforation was seen in the stomach and duodenum (see Figure 2). The CT reconstruction images revealed the relationship between the foreign body, liver, and blood vessels (see Figure 3). 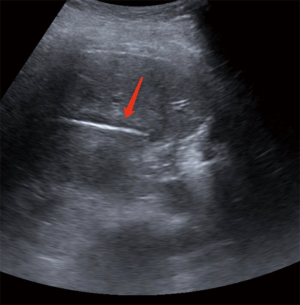 Figure 1 Ultrasound image showing a linear, highly reflective track in the right posterior lobe of the liver with sharp edges and no acoustic shadow (see the red arrow). 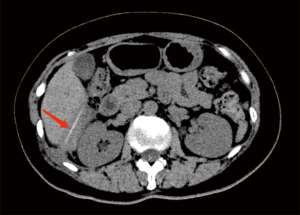 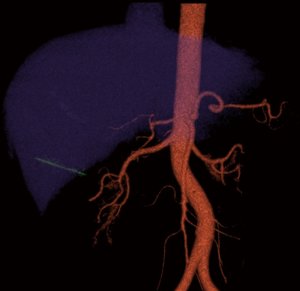 Figure 3 This CT reconstruction image clearly shows the relationship between the foreign body (in green), the liver, and the blood vessels.

After the evaluation, the patient underwent laparoscopic surgery. During the operation, a bamboo toothpick, which measured about 5 cm in length (see Figure 4), was easily extracted from segment VI of the liver tissue with no bleeding or drainage of pus (see Figure 3). No evidence of colonic or duodenal perforation was found. One-week after surgery, the patient had made an uncomplicated recovery. 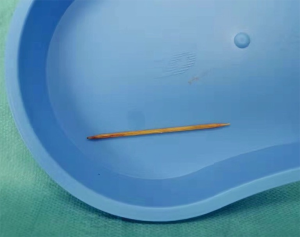 Figure 4 The bamboo toothpick that was removed from the patient’s liver.

The ingestion of a foreign body is a common phenomenon in clinical settings; however, the presence of a foreign body in the liver is an exceptional occurrence. The most common way an object migrates to the liver is from the gastrointestinal tract (notably, by passing through the gastric or duodenal wall). Consequently, such foreign bodies usually present in segments II and III of the liver (6). Such foreign bodies are usually sharp (e.g., fish bones, toothpicks, or needles) (1,7,8). However, it is rare to find bamboo toothpicks in the liver. Only a few publications have reported cases of liver abscesses caused by toothpicks in the left lobe of the liver (3,9).

Further, there have been no reports of foreign bodies found in segment VI of the liver as occurred in this case. As segment VI of the liver is close to the colon, we believe that the foreign body may have penetrated the colon wall to reach the liver. When inflammatory malabsorption or adhesions to surrounding tissues occur, they can cause liver abscesses or adhesions to the surrounding peritoneum or organs, which in turn can cause specific symptoms secondary to systemic inflammatory reactions (e.g., anorexia, fever, and vomiting) (10). No bowel perforation was found in the present case. As there was very little damage, any wounds in the intestinal wall may have healed, and there may have been less adhesion.

As stated above, most patients do not recall the inciting ingestion. Also, the interval between ingestion and symptoms may vary from 1 week to 1 year (11), making diagnosis difficult (1,3). The results of routine laboratory tests are not specific. If an object is not radiopaque, it cannot be detected (10). Thus, if foreign bodies, especially those made from wood or plastic, are suspected clinically, an ultrasound should be the first choice for the initial comprehensive liver scan (12,13). CT scanning has great diagnostic value because it provides high resolution and high precision imaging (5,10). Unlike in other cases, in the present case, the bamboo toothpick’s surface had been painted and was thus clearly visible in the CT scan. Similar to previous findings in the literature, the foreign body’s location can be found according to a CT image positioning prompt during the surgical presentation (5). Notably, in our CT reconstructed images, the relationship between the foreign bodies and liver blood vessels was clearly visible, which was very important for the preoperative diagnosis.

A magnetic resonance imaging examination (MRI) was not performed in this case. Foreign bodies usually cause a liver abscess. Prognosis depends on a rapid diagnosis to reduce morbidity and mortality (4). An MRI examination takes time, which may delay the evaluation of the disease. Further, in an MRI examination, metal foreign bodies may shift and cause other injuries. When unexplained abdominal pain occurs without any infection symptoms, even if this occurs only rarely, foreign body intake should be considered, as the migration of foreign bodies may cause severe abscesses that can be life-threatening. Given the uncertainty of foreign bodies’ nature, an ultrasound should be the first choice for initial examination. Most foreign objects can be fully displayed using CT, which plays a key role in surgery and treatment. The accepted treatment is to surgically remove the foreign body and close the perforation (14). If an abscess is found, it will also need to be drained (14). Medical treatment is more appropriate for patients with surgical contraindications and multiple liver abscesses <5.0 cm (4).

Conflicts of Interest: All authors have completed the ICMJE uniform disclosure form (available at http://dx.doi.org/10.21037/qims-20-1202). The authors have no conflicts of interest to declare.

Ethical Statement: The authors are accountable for all aspects of the work in ensuring that questions related to the accuracy or integrity of any part of the work are appropriately investigated and resolved. All procedures performed in studies involving human participants were in accordance with the ethical standards of the institutional and/or national research committee(s) and with the Helsinki Declaration (as revised in 2013). Written informed consent was obtained from the patient.