A 64-year-old female patient was admitted to our hospital due to the accidental discovery of a solid pulmonary nodule in the superior segment of the lower lobe of the right lung during a regular health checkup (Figure 1). After 2 weeks of standard antibiotic treatment, there were no significant changes to the nodule. A percutaneous CT-guided lung biopsy was subsequently performed. Before the procedure, routine blood, blood coagulation function, and electrocardiogram (ECG) were performed, and the patient's results were all in the normal range. A radiologist performed the procedure with 10 years of experience with a 64-row CT (General Electric Lightspeed, Milwaukee, USA) using an 18-gauge coaxial cutting needle (length =15 cm, PAJUNK, Geisingen, Germany), which is our most commonly utilized puncture needle. 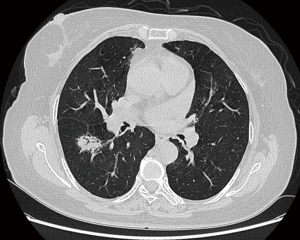 The patient lay down in the prone position and was marked on the body surface. After scanning her body at a thickness of 5 mm layer and intervals of 5 mm layer, the needle entry point and route were determined. Based on SmartStep technology, which takes the puncture point as the central plane, nine layers were scanned at a thickness of 2.5 mm layer and intervals of 2.5 mm layer, and the biopsy needle gradually penetrated into the lungs. The distance to the nodule was 8 cm from the skin and 5.5 cm from the pleura. When the needle tip was close to the nodule (Figure 2), the needle was advanced approximately 1 cm, and the patient was told to hold her breath, and then the needle was pulled out after stimulating the biopsy gun. After removing the puncture needle, the patient developed a severe cough and approximately 10 mL hemoptysis, and 2 units of thrombin were immediately administered (via injection). 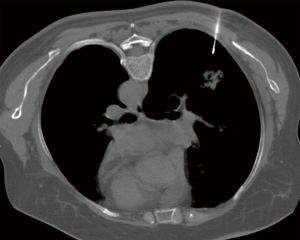 Figure 2 The biopsy needle tip was introduced near the nodule after penetrating the right lower lobe at a depth of 6 cm from the skin.

Meanwhile, the patient became restless and unconscious. CT scanning showed a significant volume of air in the left atrium (Figure 3A) and a small volume in the spinal artery (Figure 3B), and the occurrence of systemic air embolism was confirmed. The patient was immediately placed in the supine position and was given 6 L/min oxygen via a nasal catheter. Her vital signs at that time were as follows: blood pressure (BP) 110/70 mmHg, heart rate (HR) 110, respiratory rate (RR) 28 and pulse oxygen saturation (SpO2) 96%. A subsequent head CT showed no significant abnormalities, and a chest CT showed pulmonary hemorrhage around the puncture needle as well as a significant pneumothorax, which was subsequently assessed at approximately 30–35% (Figure 4).

Figure 3 An immediate CT scan reveals the air after the patient became unconscious. (A) CT showed a significant volume of air (about 25 mL) in the left atrium and (B) a small volume in the spinal artery (arrows). CT, computed tomography. 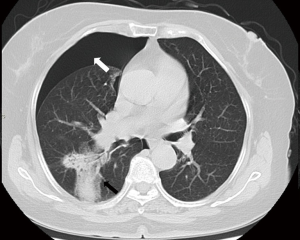 After this, the patient was transferred to the Department of Neurology for further treatment. Nervous system examination showed that she was lethargic, had a weakened pharyngeal reflex, and a positive Babinski sign. Her tongue was extended to the right, her mouth angle was skewed to the left, her left upper limb’s muscle strength was grade 0, and her lower limbs’ muscle strength was grade 1. No obvious abnormality was found in the ECG; however, the diffusion-weighted imaging (DWI) sequence of the head magnetic resonance imaging (MRI) only showed a high signal in the right parietal lobe cortex (Figure 5), which could not fully explain the neurological symptoms and physical examination. This was likely because the MRI examination could not fully reflect the severity of the cerebral infarction, as the interval between the MRI and the puncture was only 2 hours. 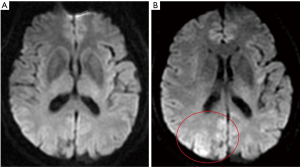 In the neurology ward, the patient was given oxygen continuously (6 L/min) via a nasal catheter which was the basic treatment for pneumothorax, and her SpO2 was stable at more than 95%. The patient’s family members rejected our suggestion of closed thoracic drainage for the treatment of the pneumothorax. Considering the pulmonary hemorrhage, we did not use thrombolytic, antiplatelet, or anticoagulant drugs to treat the cerebral infarction; only edaravone (protecting neuronal cells) and rehydration-nutritional treatment were given. Our hospital does not have hyperbaric oxygen therapy equipment. We had already contacted another hospital for hyperbaric oxygen therapy the next day and planned to perform another head MR scan before treatment if the patient’s vital signs were stable. At approximately 00:00 that night, the patient suddenly experienced shortness of breath, shallow and fast breathing, and her SpO2 decreased to 60%. Her other vital signs at that time were as follows: BP 130/85 mmHg, HR 110 and RR 44. After sucking out about 30 mL of dark red blood through a sputum suction tube, the patient’s SpO2 did not increase. The patient’s family members refused to apply invasive rescue, and the patient died as a result. Table 1 shows the timeline of important events related to the changes of the patient’s condition and corresponding management. 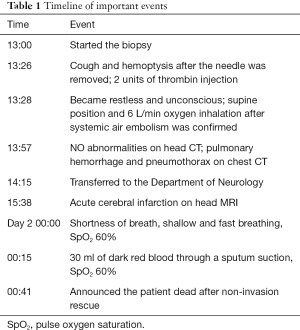 Systemic air embolism is a rare complication during CT-guided percutaneous lung biopsy, which we encountered for the first time (in almost 2,000 cases) since we launched this technology. Relevant systemic air embolism factors include the number of biopsies, needle depth, prone positions, coughing during operation, lesion located in the lower lobe, lesion located above the left atrium level vasculitis, and minor or cavity lesions (6-8). In our patient’s case, the possible relevant factors included intraoperative cough, prone position, and lesion located above the left atrium level.

In this case, we could see a small branch of the pulmonary vein on the puncture path and the inflated bronchus inside the lesion (Figure 6). When the puncture needle was withdrawn, the patient had a severe cough, which probably caused air to enter the pulmonary vein through the airway-pulmonary vein fistula. Fatal air embolism includes coronary artery embolism and cerebral artery embolism. Experiments have shown that 2 mL of air in the cerebral artery and 0.5–1 mL of air in the coronary artery could result in fatal consequences (2,11). Spinal artery air embolism is also a rare complication; so far, only one case has been reported (12). It mainly manifests as nerve damage symptoms due to spinal cord ischemic infarction, including paraplegia and motor and sensory disturbances (13).In this case, the spinal artery air embolism occurred in the left spinal artery at the eighth thoracic vertebra level, which may be related to the loss of muscle strength in the lower limbs. 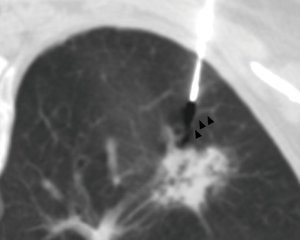 Figure 6 CT showed a small branch of the pulmonary vein on the puncture path (arrowheads) and the inflated bronchus inside the lesion. CT, computed tomography.

During the lung biopsy process, if patients have cerebral vascular embolism symptoms such as hemianopia, limb weakness, hemiplegia, lethargy, dysphasia, loss of consciousness, or coronary artery embolism symptoms (such as arrhythmia, BP drop, acute coronary syndrome, cardiac arrest, shock, etc.), the possibility of air embolism should be considered. A chest CT scan should be performed immediately to determine whether there is air in the systemic circulation. Patients diagnosed with air embolism should be placed in the supine position, right supine position, or head-down-feet-high position and should be given a high concentration oxygen and life support treatment (14). It has been shown that hyperbaric oxygen therapy is an effective method for treating systemic air embolism, which should be carried out as soon as possible after the patient’s vital signs are stabilized (15).

In this case, several complications occurred, all of which were related to the patient’s death. The direct cause of death was asphyxia caused by pulmonary hemorrhage, as the patient showed hemoptysis and pulmonary hemorrhage around the puncture needle. An intramuscular injection of hemostatic treatment (thrombin, 2 units) was administered after the procedure; however, not enough attention was paid. Hemostatic treatment should continue to be administered if persistent bleeding is suspected, which should be alerted through effective means, such as auscultation, bedside X-ray, etc. Through a subsequent investigation, we learned that the family members had helped the patient turn over before the patient had sudden dyspnea, which may have caused blood to flow into the trachea and cause asphyxiation. Patients with pulmonary hemorrhage should be placed in a diseased lateral recumbent position to prevent blood from flowing into the airway and the healthy side of the lung. In this case, the patient could not actively excrete blood from the trachea and lungs due to vague consciousness; regular sputum suction is helpful for patients to expel blood from the airway. In this case, air embolism was a rare and dangerous complication that caused obvious symptoms of cerebral embolism, which obscured the symptoms of pulmonary hemorrhage and made us underestimate the risk of pulmonary hemorrhage. This case reminds us that attention should also be paid to other complications when some serious complications are encountered.

Conflicts of Interest: All authors have completed the ICMJE uniform disclosure form (available at http://dx.doi.org/10.21037/qims-20-1290). The authors have no conflicts of interest to declare.

Ethical Statement: The authors are accountable for all aspects of the work in ensuring that questions related to the accuracy or integrity of any part of the work are appropriately investigated and resolved. All procedures performed in studies involving human participants were in accordance with the ethical standards of the institutional and/or national research committee(s) and with the Helsinki Declaration (as revised in 2013). Written informed consent was obtained from the patient’s son for publication of this article and any accompanying images.