Ureteropelvic junction obstruction (UPJO) is a common urological disease (1). UPJO not only leads to hydronephrosis, which has a series of symptoms and signs, such as back or abdominal pain, abdominal distension, and difficult urination, but also affects renal function (2-5). The biggest risk of UPJO is a renal failure (2-5). Before treating ureteral obstruction, the degree of renal functional impairment and obstruction usually needs to be considered. Dynamic renal scintigraphy of nuclear medicine is a routine method for measuring split renal functions and is widely used in clinical practice. However, due to the interference of increased intrarenal pressure, dynamic renal scintigraphy is sometimes inaccurate in evaluating the true and biggest function of hydronephrotic kidneys (5). In the baseline status, dynamic renal scintigraphy can be applied to assess present filtration or secretion ability, but not actual ability, including the potential biggest function of filtration or secretion (5). Urological surgeons need to accurately assess renal function in patients with UPJO to make appropriate treatment decisions (6,7).

Eight New Zealand white rabbits were provided by Wuhan University Center for Animal Experiment/ABSL-III Laboratory. All the rabbits were healthy adult male animals, aged over 8 weeks old, had normal renal function and a bodyweight of 2.12–2.67 kg (with a mean of 2.45±0.15 kg). The animal model of UPJO was generated using the ureteral casing method (5,15); the obstruction was unilateral and always at the upper section of the right ureter. The study was approved by the Animal Care and Use Committee of the Wuhan University Center for Animal Experiment (AUP No. 2013110).

The rabbits fasted for more than 12 hours. The residual foods were removed at 19:00 on the day before the examination, but normal drinking water was available. At this time, the function of the animal’s kidneys was at the baseline status. After injection with approximately 3 mCi of 99mTc-DTPA, the acquisition procedure was immediately initiated according to the above scanning parameters. For further details on the preparation method used before scanning and bolus injection, see (5).

The animals fasted overnight, and the residual foods were removed at 19:00 on the day before the examination. Before scanning, 75 g of compound protein foods, including 12.22 g of crude protein and 1.17 g of amino acids (lysine, cystine, and methionine), was naturally eaten by the animals as required. The animals could freely drink water but could no longer eat any other food. The duration of animal feeding was 30 to 60 min. If the foods were not completely eaten within 60 min, the animals’ feeding was interrupted artificially. In the study, the protein load was approximately 5.4 g/kg (at least 2.7 g/kg) to ensure that a saturated amount of protein was given to avoid the effect of insufficient protein load on the GFR (16). At 10 min before scanning, the animals were prepared for anesthesia.

99mTc-DTPA dynamic renal scintigraphy was performed on animals (as described above) approximately 2.5 hours after the animals began eating. For further details on the preparation method used before scanning and bolus injection, see (5). On the 1st day, the baseline GFR was measured, and on the 2nd day (approximately 24 h later), the GFR during the PLT was measured. Before the imaging agent’s injection, the same acquisition parameters as those mentioned above dynamic renal scintigraphy were used; the animals were imaged for 1 min to calculate the kidneys’ remaining radioactivity. When calculating the GFR during the PLT, a very small amount of residual radioactivity already presented in the kidneys before scanning was subtracted.

A composite image from 2–3 min was selected to outline the region of interest (ROI). The renal ROI was delineated along the edge of the functional kidney tissue; however, the nonfunctional expanded renal pelvis (for which the renal pelvis’s radioactivity was lower than the background radioactivity under the kidney) was not delineated in the renal ROI. A semilunar background ROI was outlined around the lower, outer renal margins, about 2–3 pixels from the renal ROI. The GFR was calculated according to the Gates method (17) using the measured kidney depth. In the measurement and calculation of the GFR, various influencing factors (5,18-23) were considered, and corresponding quality control was performed.

Data were analyzed with SPSS software (version 22.0; IBM Corporation, Armonk, NY, USA). The data are presented as the mean ± standard deviation (SD). A paired t-test was used in the GFR comparison between the PLT and baseline status and between the obstructed and healthy kidneys. An analysis of variance of the repeated measurement data was performed to compare the GFR and reserve function at different time points of obstruction. The Pearson method was used to analyze correlations between the renal reserve function and the baseline GFR, and the renal reserve function and obstruction duration. For the two-sided tests, the significance level was α=0.05, and a P<0.05 was considered statistically significant.

Comparison of the GFRs between obstructed and healthy kidneys 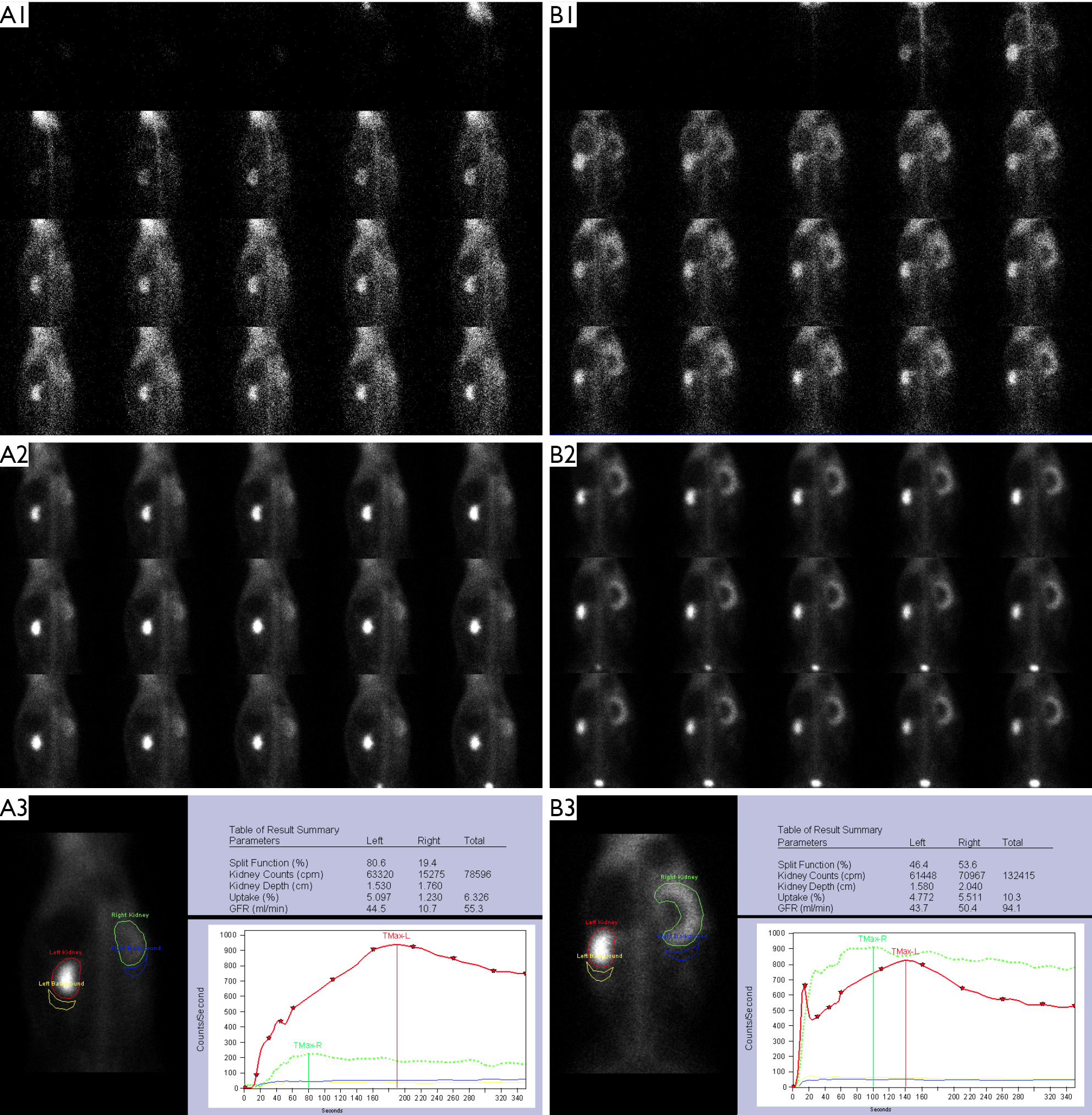 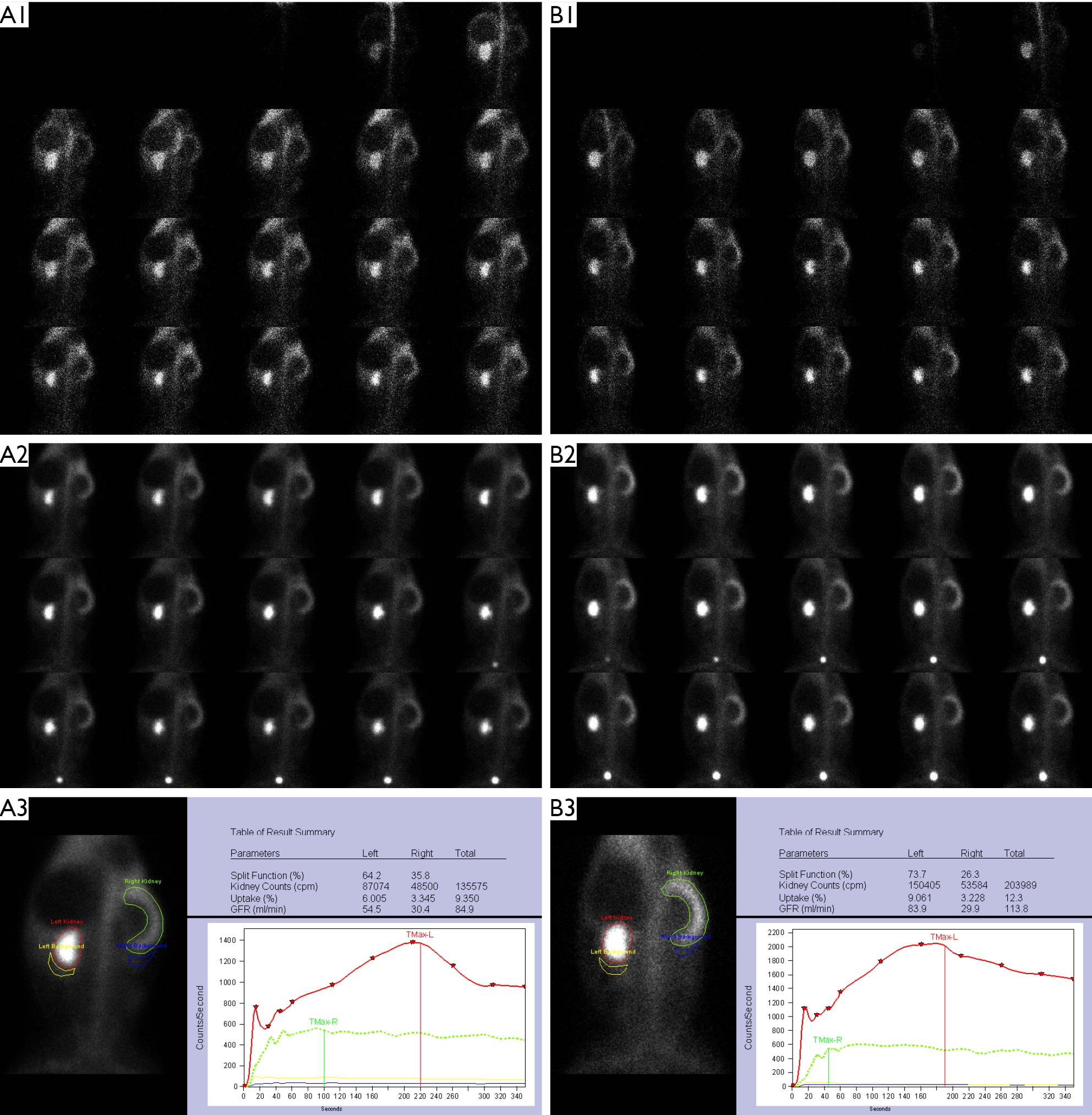 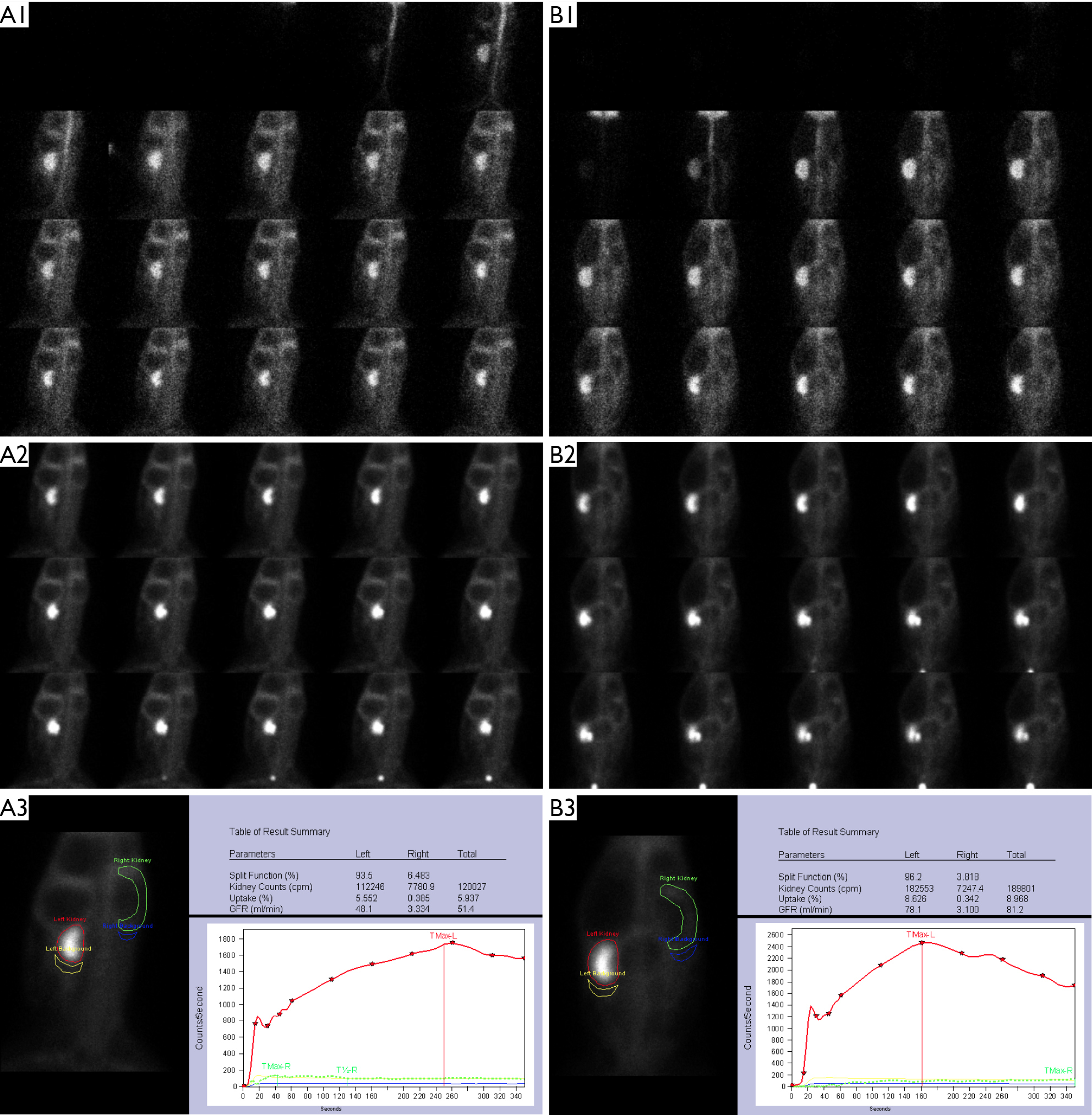 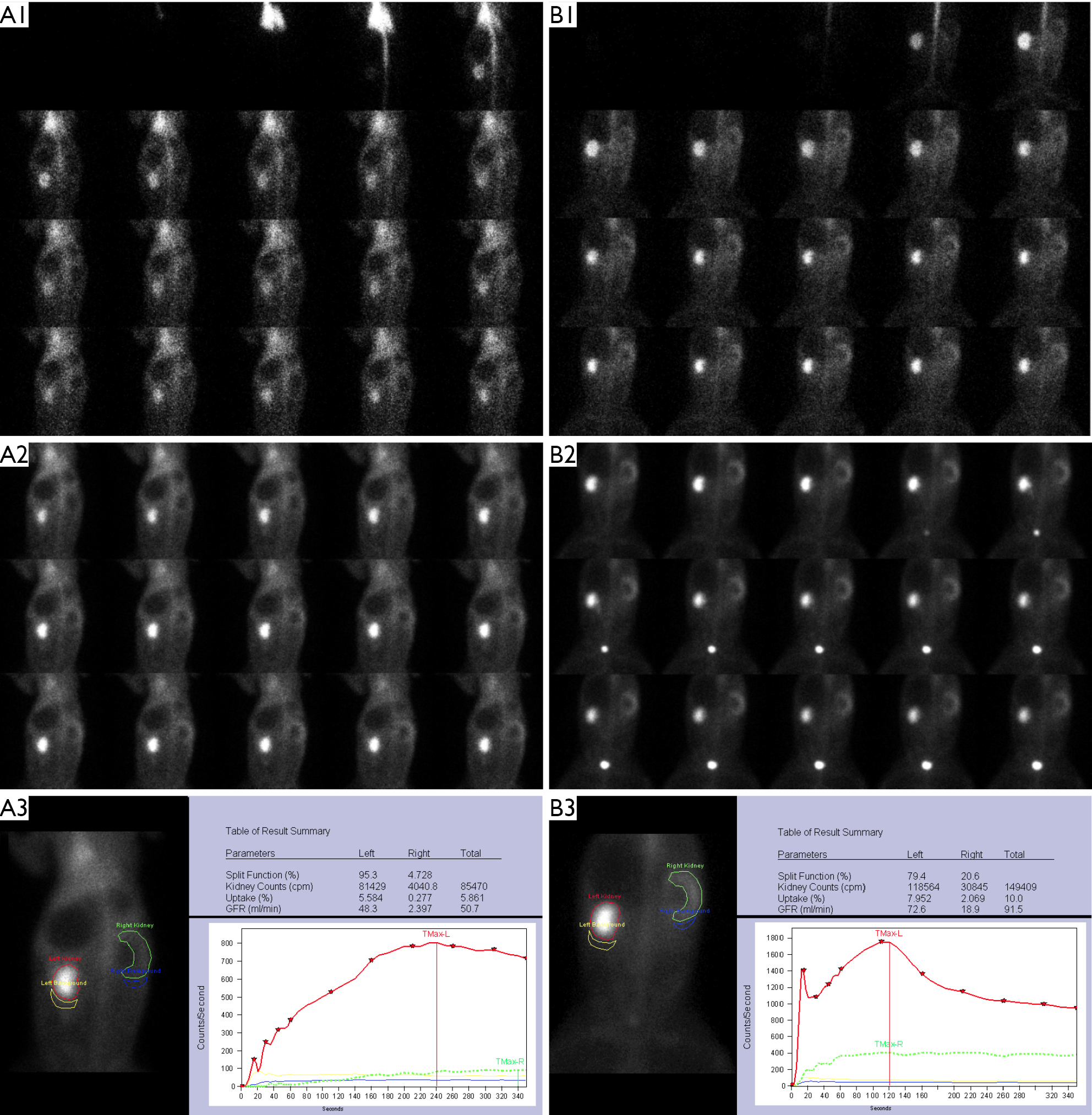 This study detected the supranormal baseline function of hydronephrotic kidneys (see Figure 1B and Figure S1). This is an incredibly new phenomenon. Previously, this phenomenon has been observed in clinical practice, but the findings have been controversial (28-31). Researchers thought such findings were impossible. Ajmi et al. (28), Moon et al. (29), and Inanir et al. (30) observed the same phenomenon; that is, that the baseline GFR in obstructed kidneys was higher than that in contralateral kidneys. However, Khan et al. (31) did not observe a similar phenomenon in the context of unilateral hydronephrosis. Moon et al. (29) speculated that the supranormal function’s reason was that the background ROI was inappropriately outlined. Similarly, Inanir et al. (30) and Khan et al. (31) contended that artificial factors caused the phenomenon. It is our view that these interpretations are unreasonable. This is a natural phenomenon in which the hydronephrotic kidney’s reserve function is gradually activated in the baseline status from a very low level that had decreased previously (see Figure 1A) and returns to the baseline function again (see Figure 1B). Thus, the hydronephrotic kidney’s supranormal function does not truly exceed normal function; rather, it is an impairment of the reserve function.

Relationship between the reserve and baseline functions of obstructed kidneys

Our study showed that the normal and supranormal baseline GFRs in hydronephrotic kidneys do not indicate an absence of impairment. Reserve function and renal function in PLT are sensitive parameters that help identify renal impairment early, and promptly remind doctors to attach importance to progressive changes in renal function caused by obstruction, and adopt timely measures to treat any such patients. Additionally, a drastically declining baseline GFR in hydronephrotic kidneys is also not an indicator of severe renal impairment or lack of function. In this study, the animals’ contralateral kidneys were completely normal, and their function could fulfill the baseline filtration requirements. Thus, obstructed kidneys can have a “rest” status with a very low baseline GFR, which may delay damage. At this time, the obstructed kidneys still have some reserve function and recoverability (6). If the residual function of a kidney is considered insignificant or nonfunctional based on the level of its baseline renal function, a step could be taken to remove the kidney surgically; however, this would be a mistake. At a certain obstruction stage, the relative stability of the baseline function cannot accurately reveal the progressive damage to an obstructed kidney. The progressively decreasing feature of the reserve function prompts clinicians to pay attention to the necessity of relieving the obstruction and protecting renal function. By detecting the renal reserve function and the renal function in PLT, we can both identify early dysfunction of obstructed kidneys and identify the hidden function of obstructed kidneys with a “resting” status. Thus, PLT has important clinical significance.

Limitations of the study

We want to thank the Wuhan University Center for Animal Experiment/ABSL-III Laboratory staff for their animal management.

Funding: The Hubei Provincial Natural Science Foundation supported this work (Grants No. 2011CHB035). The funding organization had no role in the design or conduct of this research.

Conflicts of Interest: All authors have completed the ICMJE uniform disclosure form (available at http://dx.doi.org/10.21037/qims-19-1060). The authors have no conflicts of interest to declare.

Ethical Statement: The authors are accountable for all aspects of the work in ensuring that questions related to the accuracy or integrity of any part of the work are appropriately investigated and resolved. This study was carried out following ethical standards related to the care and use of laboratory animals. This study was approved by the Animal Care and Use Committee of the Wuhan University Center for Animal Experiment (AUP No. 2013110).