Carotid plaque vulnerability was found to be associated with increased susceptibility to perioperative brain DWI lesions in CAS patients (3). Plaques with components such as a large lipid-rich necrotic core, thin fibrous cap, and intraplaque hemorrhage tend to be vulnerable (6). As a common component of carotid plaques, calcification has an important impact on the pathophysiological progression of atherosclerosis (7,8). However, the relationship between carotid calcification and perioperative ischemic brain lesions is still controversial. Although heavy calcification is traditionally considered to increase the CAS-related risk of stroke, much evidence has suggested that the size of the calcification is not associated with cerebral ischemia after CAS (9-11).

Computed tomography (CT) imaging provides detailed, rapid, high-resolution imaging of the carotid artery lumen and the plaque (12). It is extremely sensitive in the detection of carotid calcification. In clinical practice, we noticed that patients with diffuse calcification around the carotid circumference as shown on CT were more vulnerable to new infarction shortly after CAS. Therefore, the purpose of this study was to prospectively determine the relationship between the circumferential degree of calcification, along with other calcification characteristics, and ipsilateral new ischemic brain lesions after CAS.

Between January 2018 and September 2019, 96 patients who were referred to CAS treatment were enrolled in this study. All patients had symptomatic carotid stenosis of ≥50% or asymptomatic carotid artery stenosis of ≥70% according to the North American Symptomatic Carotid Endarterectomy Trial (NASCET) criteria (13). All patients underwent carotid CT angiography (CTA) within 1 week before CAS. Brain magnetic resonance imaging (MRI) was performed the same day as carotid CTA, and then repeated 1–3 days after CAS. The exclusion criteria included the following: prior carotid artery procedures (carotid endarterectomy or CAS), carotid occlusion, nonatherosclerotic carotid stenosis, and contraindications to contrast-enhanced CT or MRI. Vascular risk factors including hypertension, smoking, diabetes, coronary heart disease, and hyperlipidemia were also recorded. This study was approved by the ethics committee of our hospital (No. B2020-400R). Informed consent was waived due to the retrospective analysis design of the study.

All CT examinations were performed on a 320-row CT system (Aquilion ONE; Canon Medical Systems Corporation, Otawara, Japan). Scans were collimated at 0.6 mm, with a peak kilovoltage of 120 and auto milliampere, and a rotation time of 0.5 seconds. The scan range was from the aortic arch to the skull vertex. Through use of a power injector, 50–70 mL (according to the patient’s body weight) of contrast media (iopamidol, Iopamiron 370; Bracco, Milan, Italy) was injected into the antecubital vein at a flow rate of 5 mL/s followed by a 25 mL saline flush. A bolus-tracking technique was used in CTA scans with a threshold of 100 Hounsfield unit (HU) measured in the aortic arch.

The raw CTA images were transferred to a workstation (Vitrea fx 6.0; Vital Images, MN, USA), and multiplanar reformats were created for diagnostic reading. Assessment of carotid calcification was performed through consensus reading by two radiologists (AJ and RZ with 5 years’ and 3 years’ experience in neurovascular imaging, respectively) who were blinded to patients’ clinical information and treatment options. Calcifications were defined as hyperdense regions with a density of >130 HU on CTA images (14).

All treatments were performed by an experienced vascular surgeon with 10 years’ experience in neurovascular intervention. Clopidogrel (75 mg/d) and aspirin (100 mg/d) were given to the patients 1 week before the procedure. CAS was carried out with the patient under local anesthesia and was performed with full systemic heparinization. A guiding catheter was placed in the ipsilateral common carotid artery. When distal embolic protection devices were used, predilatation was performed with a balloon catheter, and a stent of appropriate size was selected and deployed. If stent expansion was insufficient, postdilatation was performed. Emboshield (Abbott Vascular, Abbott Park, IL, USA) and Filterwire (Boston Scientific, Natick, MA, USA) embolic protection devices were used in all the patients. The three types of stents used were Acculink (Abbott Vascular,), Precise (Johnson & Johnson, Cordis, MN, USA), and Wallstent (Boston Scientific). All three carotid stents used in this study were MR safe at 3.0 T.

Continuous variables are expressed as means ± standard deviation and were compared using the independent t-test or Mann-Whitney U test. Categorical variables were compared with the chi-square test. Univariate and multivariate logistic regression analyses were applied to determine the association between carotid calcification characteristics and new ischemic brain lesions after CAS. Statistical significance was defined as a P value <0.05. All statistical analyses were performed using SPSS 21.0 (IBM Corp., Armonk, NY, USA).

All 96 patients were included in the analysis. Baseline characteristics of the study population are listed in Table 1. The mean age of the 96 patients was 67.8±6.8 years, and most patients were men (n=80, 83.3%). The baseline data were similar between the DWI+ and DWI– groups. 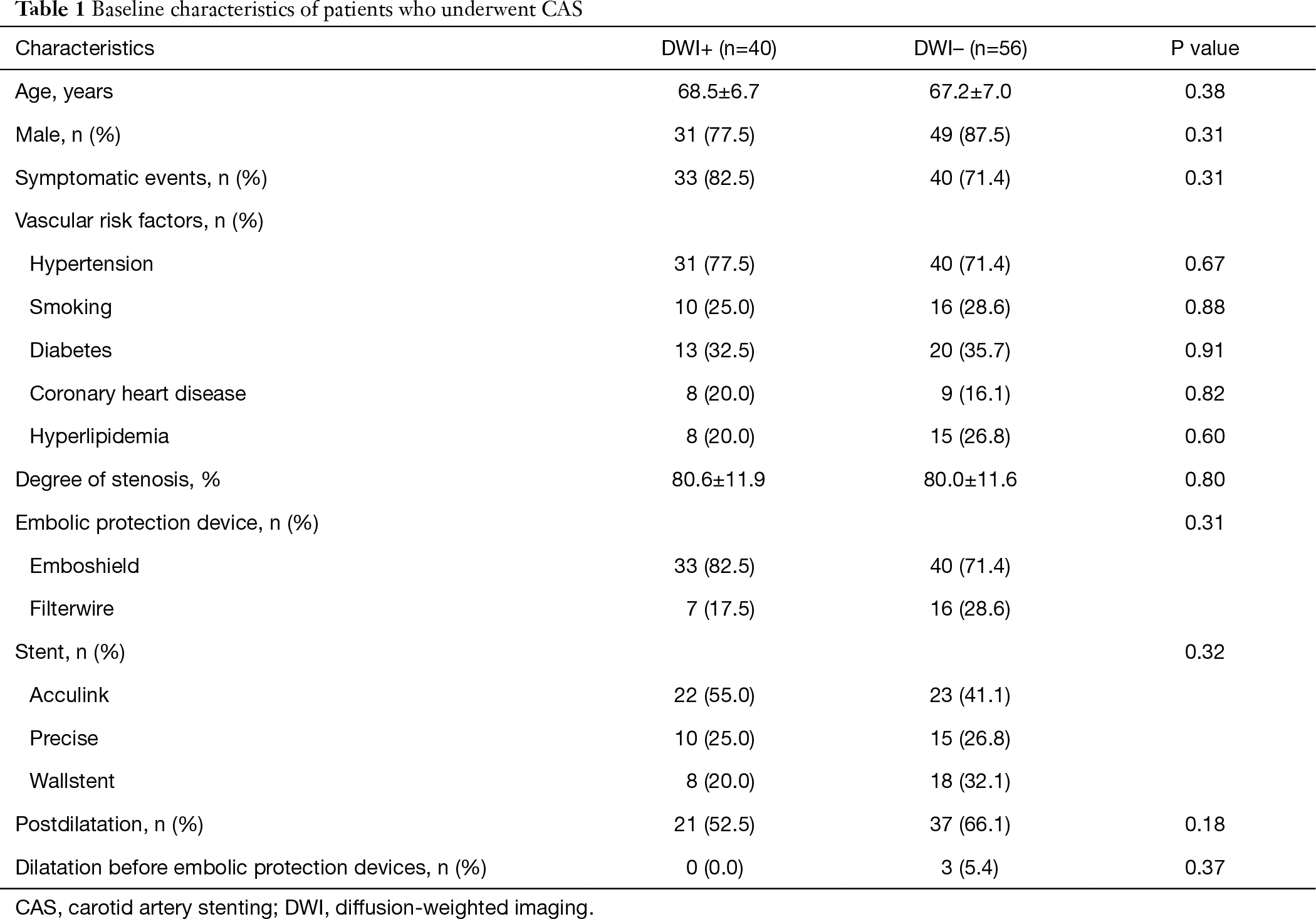 CAS was achieved successfully in all the 96 patients. New ischemic brain lesions on DWI were observed in 40 patients (41.7%). Stroke symptoms occurred in 4 of the 40 patients in the DWI+ group. Compared to the DWI– group, the DWI+ group had a larger circumferential degree of carotid calcification (P=0.01). Furthermore, 21 of the 27 patients (77.8%) with >180° circumference carotid calcification were detected as positive for DWI lesions (Figure 2). There was a possible trend toward significance for the percentage volume of calcification between the DWI+ and DWI– groups (P=0.07). No statistically significant differences were found between the DWI+ and DWI– groups with regard to all the other calcification characteristics, including the location (P=0.18), volume (P=0.37), maximum density (P=0.44), mean density (P=0.39), Agatston score (P=0.28), and total plaque volume (P=0.33) (Table 2). 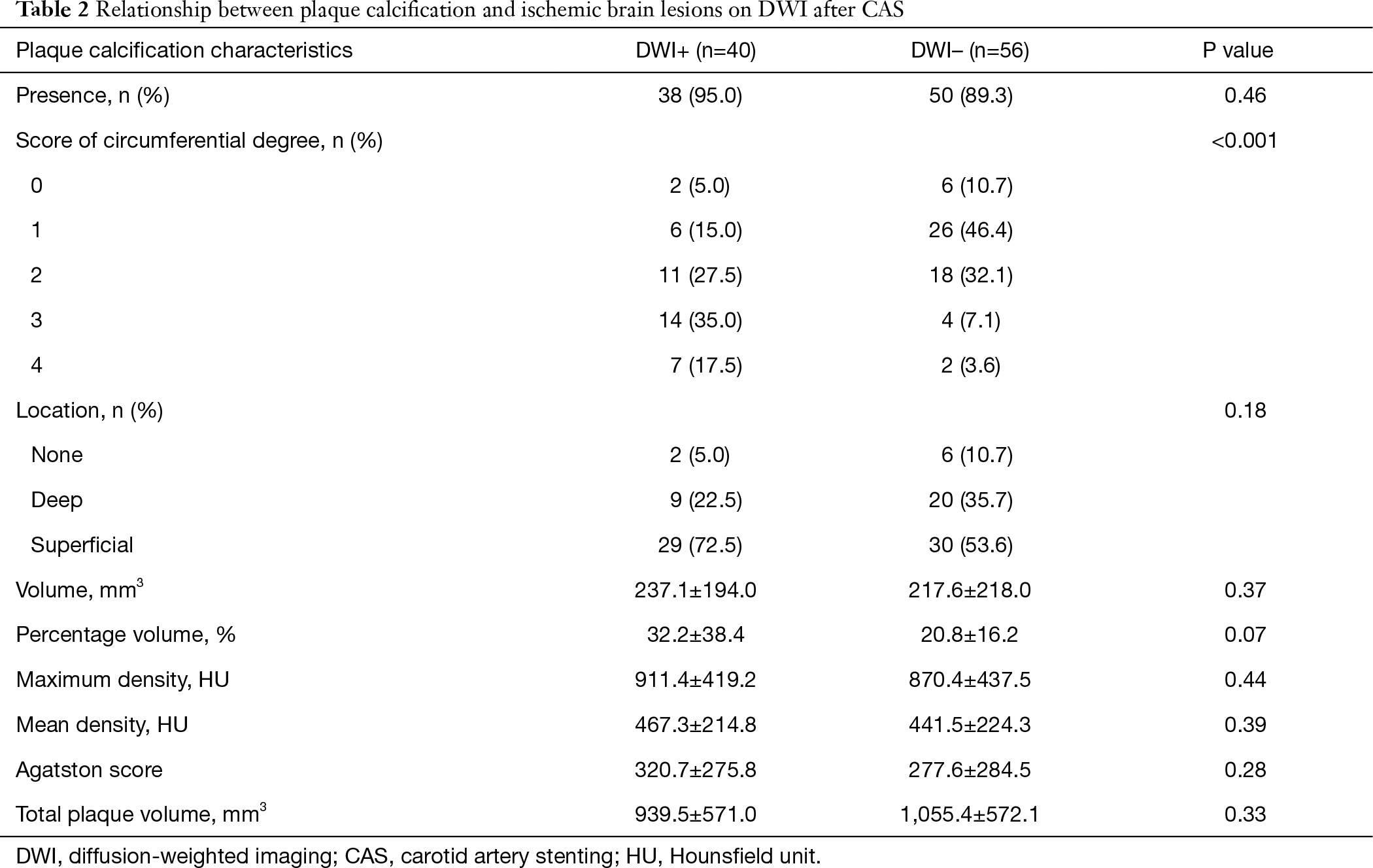 In the univariate analysis, a high score for the circumferential degree of calcification was associated with new ischemic brain lesions on DWI after CAS [score 3, odds ratio (OR): 9.7, P=0.001; score 4, OR: 5.5, P=0.046] (Table 3). In the multivariate analysis, this association remained and became more significant after adjustments for age, sex, symptomatic events, postdilatation, and dilatation before embolic protection devices (score 3, OR: 10.7, P<0.001; score 4, OR: 11.7, P=0.038).

Calcification is considered a late process in the atherosclerotic pathophysiology and is common in carotid plaques of moderate and severe stenosis. Besides atherosclerosis, renal dysfunction, metabolic calcium disorder, diabetes, and many other diseases may also lead to calcification of the arterial wall. These etiologies often coexist in elderly people. In our study, 88 of 96 patients (91.7%) had carotid calcification, while new ischemic brain lesions after CAS were only found in 40 patients (41.7%). This indicated that the characteristics of the calcification, rather than the presence of calcification, might be related to ischemic brain lesions after CAS. Two previous studies assessed carotid plaque characteristics by virtual histology intravascular ultrasound and found no significant differences in the calcium area between the DWI+ group and the DWI– group (10,11). Another study based on carotid CT also found no correlation between the high-signal DWI lesions and plaque volume of HU >60 (18). Similar results were shown in our study, which supported the notion that the size of the calcification was not significantly associated with cerebral embolism after CAS.

Further analysis by our study found an association between the degree of circumferential carotid calcification and new ischemic brain lesions after carotid stenting. As the stent is pushed open, the vessel wall is stretched to accommodate the stent expansion. However, vessel walls with different plaque components respond differently under mechanical tension, resulting in nonuniform stretching. As the hard calcified plaques are more rigid against deformation, vessel segments with soft plaques on the same circumference have to compensate by overstretching in order to achieve sufficient stent expansion (18). Therefore, when the carotid vessel wall contains considerable circumferential calcification but little soft component, the inserted stent is opened inadequately due to excessive resistance from the rigid vessel wall, with possible consequences being stent recoil and restenosis, which eventually leads to cerebral ischemia (19). Achieving adequate stent expansion requires a significantly greater force, which increases the risk of excessive stretching of the vessel wall. In this situation, the vessel wall could be injured, and the plaque could be fractured, leading to dislodging of both the calcified and noncalcified contents of the plaque (17,20).

Our study had several limitations. First, the number of patients was relatively small, and most patients had carotid stenosis of >70%. It was unclear whether patients with stenoses of 50–70% would show the same associations. Therefore, a study involving a larger sample size with a wider range of stenoses is needed. Second, although CT was an ideal imaging examination for the detection of calcification, due to blooming artifacts, overestimation of calcification might have occurred in plaques with heavy calcification (21). However, similar bone window settings were used to identify carotid calcification on the CT images of all the patients, which would mitigate the impact of blooming artifacts on the results (22). Third, we only observed whether new hyperintense lesions existed on postoperative brain DWI; however, the number and size of these lesions could vary, which might affect the patients’ rehabilitation. Finally, only calcification was assessed comprehensively in this report, and future studies with a combination of other characteristics of vulnerable plaques in addition to calcification may further improve the reliability of prediction.

The circumferential degree of carotid calcification was associated with new ischemic brain lesions after CAS. CAS should be avoided if possible for carotid stenosis with large circumferential calcified plaques.

Funding: This work was supported by the National Key Research and Development Program of China (No. 2018YFC1312301).

Conflicts of Interest: All authors have completed the ICMJE uniform disclosure form (available at http://dx.doi.org/10.21037/qims-20-1244). The authors have no conflicts of interest to declare.

Ethical Statement: This study was approved by the ethics committee of our hospital (No. B2020-400R), and individual consent for this retrospective analysis was waived.