It has not been previously possible to investigate the link between the presentation of flow related symptoms, such as pulsatile tinnitus, and flow patterns (1). In recent years, magnetic resonance imaging (MRI) has able to determine the full velocity field in 3-dimensional (3D) space through the cardiac cycle. We used MR flow imaging in vivo and in vitro with a patient-specific flow model to study the flow patterns in the dominant right sigmoid sinus and jugular vein of a patient who presented with right-sided subjective pulsatile tinnitus which cannot be heard by an examiner auscultating the head.

A 62-year-old female presented with debilitating pulsatile sound in her right ear. For 4 years she had noticed a steady ringing when yawning or clenching of her teeth. For the most recent 2 years she was also aware of a “whooshing” sound in her right ear that had the same frequency as her pulse. Soon after, the “whooshing sound” began in her left ear as well. She stated that the ringing occurred daily and was constant, and also observed that the noise became louder when she protruded her lower jaw. The patient was referred for an investigational MRI to determine whether there might be any apparent abnormalities in the flow in her sigmoid sinus or jugular vein. The study was conducted under a CHR-approved protocol. Imaging was performed on a 3 Tesla Skyra scanner (Siemens Healthcare Systems, Erlangen, Germany) using the standard clinical head and neck coil. Vascular anatomy was established with a 3D contrast-enhanced MR-Angiography study. A 2 cc test bolus was first used to determine the delay between acquisition and peak venous enhancement. Image acquisition was then performed with prescription of a coronal slab with 0.7 mm isotropic resolution using a 20 cc bolus of gadolinium-diethylenetriamine pentaacetic acid (Gd-DTPA) with an elliptic-centric acquisition timed to coincide with peak venous enhancement at the center of k-space. Finally, a time-resolved 3D phase-contrast (PC) MRI was acquired to measure the 3D blood flows in the jugular vein (2). This sequence was applied as a coronal slab with 1.3 mm isotropic resolution; velocity encoding (VENC) level =100 cm/s; and nine phases through the cardiac cycle. The patient had a dominant right jugular vein (Figure 1) with a high-riding jugular bulb. The mean flow rate was measured to be 4 mL/s. Flow visualization showed the presence of a helical flow pattern originating in the superior aspect of the jugular bulb and propagating down the descending jugular. 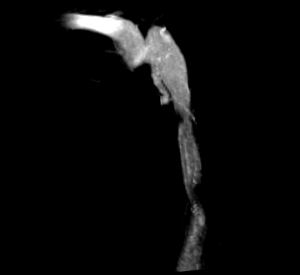 To study the effect of varying flow rates on the flow patterns, an exact replica of the patient’s right jugular vein was created, using a previously cited method (3). In short, the lumenal volume, as determined from the contrast-enhanced magnetic resonance angiogram (CE-MRA), was printed in wax using a 3D printer (Solidscape, Merrimack, NH, USA). After embedding in silastic the wax was melted out. The hollow replica was placed in the scanner and water doped with 1:100 Gd-DTPA was pumped through at a flow rate designed to dynamically match the in vivo conditions and equivalent to 3, 6 and 7 times the physiological flow rates. Time-resolved 3D MR velocity data was again acquired for each of the flow conditions. The flow data was post-processed using custom software and visualized with commercial software (Ensight, CEI Inc., Apex, NC, USA).

Data acquired from the in vitro model using flow values dynamically matched to those actually measured in vivo and demonstrated the same helical patterns (Figure 2). In the higher flow rates, the helices in jugular bulb became tighter and traveled further down the jugular vein before dissipating as the flow rate increased (Figure 3). 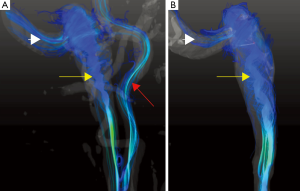 Figure 2 Streamlines in the sigmoid sinus (arrowhead); jugular vein (yellow arrows) and carotid artery (red arrow) from (A) in vivo scan, and (B) from the flow model under matched flow conditions.

Figure 3 Streamlines derived from magnetic resonance velocimetry (MRV) on the flow model for increasing flow rates, equivalent to (A) 3, (B) 6, and (C) 7 times the physiological flow rate.

This study demonstrates that flow in the jugular vein can be extremely complex and in certain geometries, and may manifest with highly vortical flow. Furthermore, the particular vortical structure will vary depending on the net flow rate. The use of patient-specific replicas provides a tool that can be used to validate in vivo findings, and also provides an ability to vary flow rates over a range that is not possible in vivo. While no definitive link was established between the observed flow conditions and the sounds that were experienced by the patient, it is known that vortical flow can be a source of sound generation (4).

The authors would like to thank Farshid Faraji for his help in handling the raw data.

Funding: This work was supported in part by the National Institutes of Health, NS059944 (DS).