The caudate lobe is located at the most dorsal domain of the liver, and the procedure for resecting the lobe is complex. The caudate lobe is surgically classified into 3 portions with prominent landmarks: (I) Spiegel portion (left protruding part from Arantius’ ligament), (II) process portion (right protruding part, caudal to the right portal pedicle), and (III) caval portion (paracaval part that is covered by the right and middle hepatic veins (MHV) and bordered on the dorsal side by the right portal pedicle). The 9 procedures for caudate lobe resection have been described (1). When the tumor is located in the paracaval portion or occupies the entire caudate lobe, it can be resected with other adjacent liver regions in patients with good liver function. When a tumor less than 5 cm in diameter is localized in Spiegel’s lobe or the caudate process, only the portion, including the tumor, should be resected. High dorsal resection (HDR) is planned only when patients have a poor functional reserve [indocyanine green retention rate at 15 min (ICG-R15) >20%] (2).

HDR enables en bloc removal of the 3 portions (Spiegel, process, and caval portions) (3) of the caudate lobe without sacrificing any other major hepatic vessels (2,4). However, this procedure is technically demanding as the operation field is deep and narrow on the liver’s dorsal side (2,5,6). As important prerequisites, preparative total liver mobilization and exposing landmarks during liver resection are indispensable (5,7). HDR is rarely performed, and the pitfalls have been insufficiently recognized. Here, we described the technical pitfalls and operative outcomes at our institution, focusing on procedural and operative perspectives.

Between September 2002 and February 2012, there were 141 patients of resection for hepatocellular carcinoma (HCC) originating in the caudate lobe. Among them, a total of 9 patients underwent HDR (Takayama’s procedure) at Nihon University Itabashi Hospital (2). Surgical indications were determined according to the tumor location within the lobe and the ICG-R15. Recently, we established an algorithm to select the optimal procedure for caudate lobe HCC based on our experience (1). When HCC (<3 cm) is localized in the Spiegel or process portion, partial resection of each portion is indicated. In patients with large HCC (>3 cm) and good ICG-R15 (<10%), left hemihepatectomy for Spiegel-HCC or right hemihepatectomy for process-HCC is the first procedure, and in those with ICG-R15 ≥10%, partial resection or ventral resection is indicated (8). When HCC (>3 cm) is located in the caval portion, concomitant total caudate lobe with right hemihepatectomy is the first option in those with ICG-R15 <10%. Irrespective of tumor size, ventral resection is indicated in patients with ICG-R15 10–20%, and HDR is indicated in patients with ICG-R15 ≥20% (2,8).

For HDR, the caudate lobe’s right boundary and the transection line at the ventral side were hard to visualize (2,5-7). Therefore, a “counterstaining technique” via the right posterior portal branch helped visualize the border between the stained and unstained area, which corresponded to that of the posterior segment and caudate process (2,4). The “tattooing technique” passing through the right hepatic vein (RHV) and MHV created a landmark in the ventral border of the liver parenchyma during liver transection (4). Other boundaries of the caudate lobe were easily recognized by the corresponding vessels or structures [left border, Arantius’ ligament; dorsal surface, inferior vena cava (IVC); ventral surface, the main trunk of the RHV and MHV; cranial extremity, bifurcation of the major hepatic veins; caudal extremity, hepatic hilum].

Liver transection started from the right side boundary line, which was revealed by the counterstaining method (2,4) and proceeded cranially towards the posterior surface of the RHV, followed by division of the caudate posterior Glisson’s branches. Creating a right-side boundary transection line is a key step to creating a good surgical plane (6) (Figure 1A). When the transection proceeded to the hepatic hilum, the Glisson’s branches to the paracaval portion was divided. On the left side, Spiegel’s lobe was transected along the Arantius’ ligament (Figure 1B). Then, after complete resection of the caudate lobe by HDR, the ventral surface of the IVC and the dorsal surfaces of the RHV, MHV, and hepatic hilum were exposed completely on the raw surface of the liver. 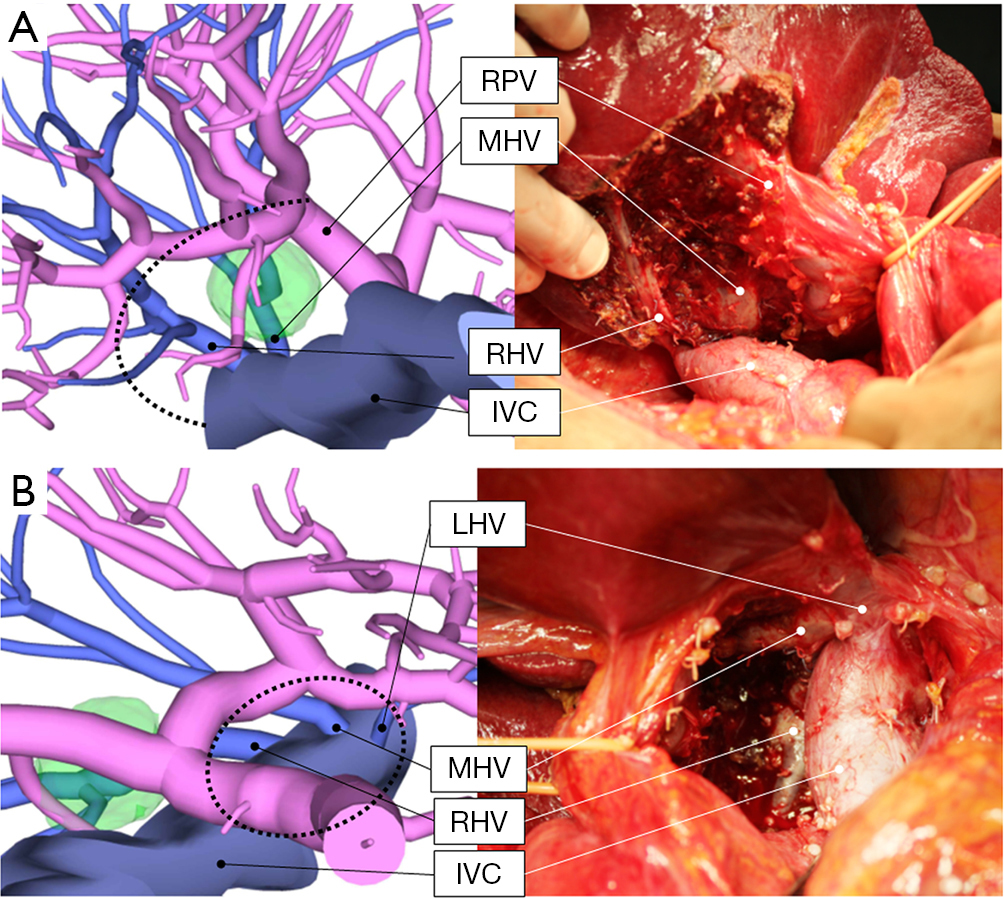 Figure 1 Surgical planes from the right and left side of high dorsal resection were visualized with main landmark structures. (A) Surgical plane from the right side. Right boundary transection line is key to having a wider operation view. Exposing the dorsal side of the right hepatic vein (RHV) is the first step. Transection continues to the right side of the inferior vena cava (IVC) via the dorsal side of the middle hepatic vein (MHV). At the hepatic hilum, thin Glissonean branches of the caudate lobe should be carefully divided. (B) Surgical plane from the left side. From the left side view, the operation field is limited because the hepatoduodenal ligament is fixed. LHV, left hepatic vein; RPV, right portal vein. 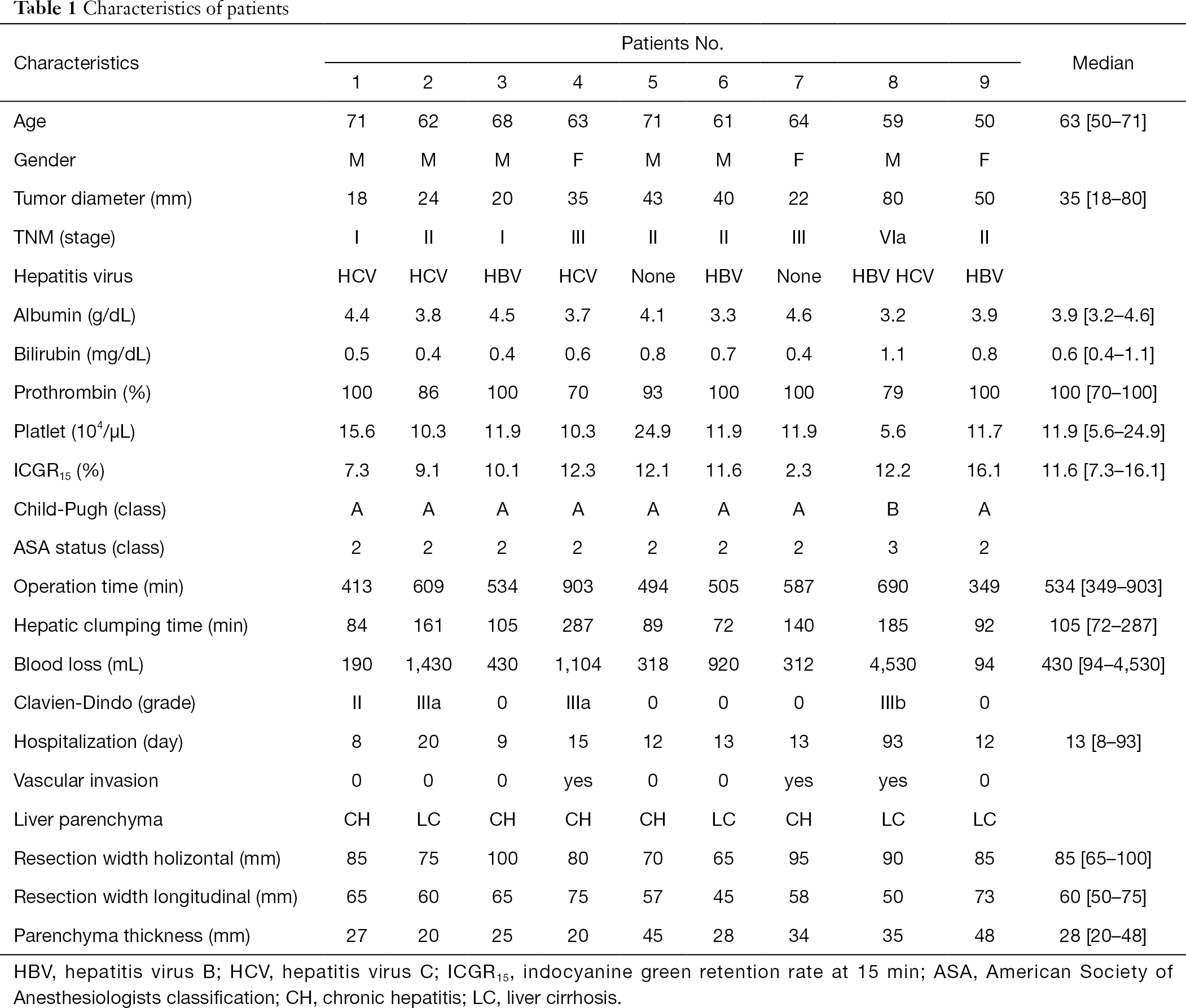 Outcomes of the operation

The median operation time for HDR was 534 min (range, 349–903 min), and the median intraoperative blood loss was 430 mL (range, 94–4,530 mL) (Table 1). One patient had a Clavien-Dindo classification grade IIIb complication [post-hepatectomy liver failure grade B according to the International Study Group of Liver Surgery (ISGLS) classification]. There was no mortality and no severe complications. The median hospitalization was 13 days (range, 8–93 days).

The median surgical margin was 0 mm (range, 0–3 mm). The median normal parenchyma thickness at the resected specimen was 28 mm (range, 20–48 mm). The 0 mm margin meant the pathological surgical margin was approximately 0 mm, but the tumor was surrounded by a firm fibrous capsule, which is unique compared to classical HCC. The surgical impact for those tumors was comparable to R0 resection (9). Therefore, we considered the surgical margin to be 0 mm, but not tumor exposure in such cases. Also, the caudate lobe was very narrow and located between major vessels, and when the tumor diameter was beyond the thickness of the normal parenchyma, we judged it to be the same as R0 throughout this article. 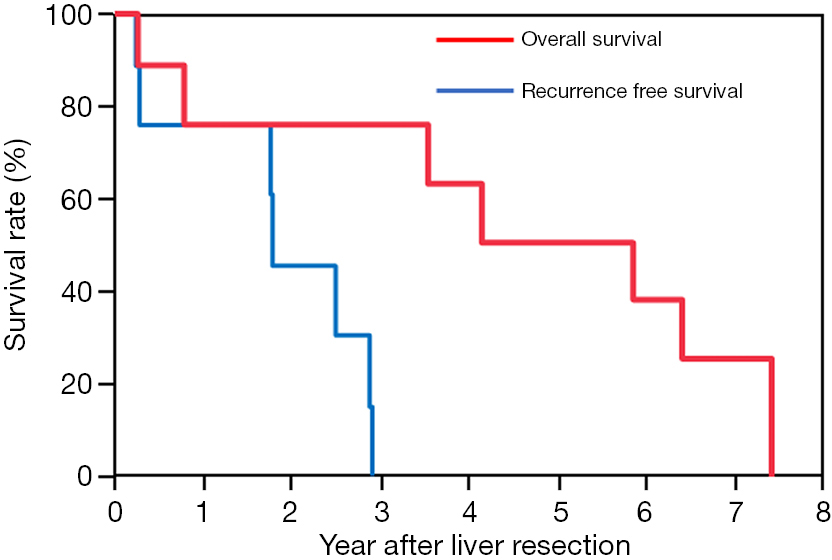 Even though the caudate lobe is located on the most dorsal side of the liver and is surrounded by major vessels, HDR was performed with minimum liver parenchyma loss, favorable operative safety, and comparable survival rates to that of other segments. This series performed HDR with low blood loss (median 430 mL) and no mortality in patients with poor liver function. HDR achieved a comparable 5-year-survival rate (50.8%) to that of the entire HCC Japanese national cohort (57.3%) (10). Since the caudate lobe is located deep inside the liver, creating a wide surgical plane contributes to liver transection safety. Therefore, exposing all landmark vessels for liver transection is essential in this specific procedure.

This study demonstrated the surgical plane and outcomes of HDR. The median parenchyma thickness at the resected specimen was only 28 mm. The caudate lobe is surrounded by major vessels, and the hepatoduodenal ligament is located at the transection line center. The operation view of HDR is limited, especially from the left side approach. For this reason, a wide surgical view from the right anterior oblique is essential, and exposing landmark vessels is the first step (2,5,7). Creating a right-side boundary line and starting transection from the right side is key to obtaining an optimal surgical plane (6). Therefore, when the tumor diameter is more than 30 mm, the tumor is always in contact with major vessels, making it difficult to obtain a good surgical view (5-7). For that reason, the surgical margin of HDR was close to 0 mm, but there was a fibrous capsule around the tumor. We avoided exposure of the tumor at the surgical margin by careful transection. Therefore, we recommend HDR for patients in whom caudate lobectomy with partial resection of a major lobe is precluded by poor liver function and tumor location at the paracaval portion. When the tumor is located close to the hepatic veins’ junction, we advise that ventral resection is the preferred procedure (8). The operation type should be selected based on the liver functional reserve. We introduced 9 procedures for caudal lobe resection, and the selection of patients was optimal for HDR according to our algorithm (2). However, HDR requires in-depth knowledge and a high skill level for liver resection; therefore, liver transplantation is another possible option. Most of the patients in our series were within the Milan criteria, indicating that they were good candidates for liver transplantation if a donor is available.

HDR is one of the most complex liver surgery procedures as the caudate lobe is located on the most dorsal side of the liver and is surrounded by major vessels (3). Accidental bleeding from the ventral side of the major vein is the most feared complication (5,7). Though the surgical view was limited, creating a good surgical plane contributes to the clearance in surgical fields. We achieved a severe grade morbidity rate of only 11.1%, which is less than other reports in caudate lobe resection (26.1–60.0%) (4,7,11). The survival rate for caudate lobe HCC was thought to be worse compared to other portions. However, the reported cases’ 5-year survival rates varied, ranging from 26% to 76% (4,7,11). In our study, the 5-year overall survival rate of 50.8% seemed reasonable, as it was comparable to the entire Japanese national study cohort for HCC (10).

In conclusion, patients with HCC of the caudate lobe with poor liver function are good candidates for HDR and can achieve good outcomes.

Conflicts of Interest: All authors have completed the ICMJE uniform disclosure form (available at http://dx.doi.org/10.21037/qims-20-964). The authors have no conflicts of interest to declare.

Ethical Statement: The authors are accountable for all aspects of the work in ensuring that questions related to the accuracy or integrity of any part of the work are appropriately investigated and resolved. The study was conducted in accordance with the Declaration of Helsinki (as revised in 2013). The ethics committee at Nihon University School of Medicine approved this study. The written informed consent was obtained from all patients.