Patients with end-stage renal disease (ESRD) are highly prone to cardiovascular diseases (CVDs) in comparison with the general population (1,2), and more than 60% of ESRD deaths are caused by CVD such as malignant arrhythmia, chronic heart failure, sudden cardiac death, and so on. Left ventricular (LV) dysfunction is one of the leading causes of cardiac death, which is common in patients with ESRD. Therefore, early detection of LV dysfunction in these patients is vitally necessary. However, conventional echocardiography is not sensitive in detecting early deterioration of cardiac function as global LV parameters of the cardiac cavity size and ejection fraction (EF) are generally normal, despite the presence of subtle LV systolic dysfunction (3).

Myocardial strain acquired by two-dimensional speckle-tracking imaging (2D-STI) has emerged in the last decade as a reliable technique for detecting subclinical LV systolic dysfunction, which has allowed advancements in LV quantification beyond LVEF (4). Moreover, global longitudinal systolic strain (GLS), derived from 2D-STI, has been demonstrated as a superior predictor of adverse cardiovascular outcomes and all-cause mortality with advanced kidney disease compared to LVEF (5-7). Nonetheless, the question has arisen regarding what ESRD patients’ factors are related to impaired LV systolic longitudinal strain. Accordingly, this study’s objective was to evaluate the factors in ESRD patients with preserved LVEF associated with impaired LV longitudinal systolic function.

A total of 112 inpatients and outpatients of our hospital with ESRD were recruited from September 2019 to May 2020. The inclusion criteria were as follows: >18 years old; estimated glomerular filtration rate (eGFR) of ≤15 mL/min/1.73 m2 by the Modification of Diet in Renal Disease formula (8) or on maintenance hemodialysis, LVEF >50% normal sinus rhythm. There were 12 patients excluded due to coronary artery disease (n=7), severe valve diseases (n=2), and suboptimal image quality (n=3). Therefore, 100 participants were finally included in this study. The Ethics Committee approved the study of the Second Affiliated Hospital of Nanchang University, and individual consent for this retrospective analysis was waived. This study was performed following the World Medical Association Declaration of Helsinki.

Comprehensive conventional TTE was performed by well-trained cardiologists in the left lateral decubitus position for optimal image quality, using a commercially available GE Healthcare Vivid E95 equipped with M5S 3.5 mHz transducer (GE Healthcare, Chicago, IL, USA). The dimension of LV at end-diastole (LVEDD) and end-systole (LVESD), interventricular septum thickness in diastole (IVSd), and posterior wall thickness (PWTd) were measured by M-mode echocardiography from the parasternal long-axis view. The LV mass was determined using the Devereux formula and was indexed by body surface area (BSA) for LV mass index (LVMI). Relative wall thickness (RWT) was calculated as the ratio of 2× PWTd/LVEDD. Hypertrophy of the LV (LVH) was defined as LVMI (male) >115 g/m2 and LVMI (female) >95 g/m2 (9). The LVEF was determined by utilizing biplane Simpson’s method. From the apical 4-chamber view, mitral peak early diastolic velocity (E) and peak late diastolic velocity (A) were assessed by pulsed-wave Doppler. Tissue Doppler assessed the early diastolic peak velocity (e') at the septal mitral annulus site. The ratio (E/e') was calculated as a reliable index of LV filling pressures (10-12). All measurements were completed according to the guidelines published by the American Society of Echocardiography (13).

To perform the speckle tracking strain analysis, three standard apical views (4-chamber, 2-chamber, and 3-chamber) were acquired by grayscale images at frame rates of 50–80 frames/sec and were stored in a cine-loop format. The analysis was executed online using GE propriety software (GE, Vingmed Ultrasound, Horten, Norway). Detailed information on the methodological procedure of 2D-STI has been previously described (14). In short, the software automatically determined the endocardial and epicardial boundaries at end-systole with automated function imaging (AFI) for each view, with adjustments performed manually until optimal tracking was achieved. The software automatically divided the LV into six segments in each view for 18 segments. Then, GLS was determined as the average of peak longitudinal strain for all the segments within the three standard apical views. For this study, GLS was represented as an absolute value. Participants were excluded if there was any suboptimal segment. As previously reported, a GLS absolute value of <18% was considered subclinical LV systolic dysfunction in participants with preserved LVEF, according to previous researches (9,12,15).

Data were expressed as mean ± standard deviation (SD) and frequencies (%) for continuous variables and categorical variables, respectively. Comparisons of continuous variables in two groups were performed using the Student’s t-test or Mann-Whitney U test. Categorical variables were compared by χ2 or Fisher’s exact test. Pearson correlation coefficients were used to assess the correlation between two variables. Univariate logistic regression was used to determine possible correlations of reduced LV systolic function (GLS <18%), and parameters with P value <0.1 or clinically relevant ones on univariate analysis were incorporated into the multivariate analysis to determine the independent associations (P<0.05). Multicollinearity between variables was not be allowed in the multivariate analysis. A sequential logistic model for GLS <18% was introduced and tested by χ2 tests to determine the incremental value of independent risk factors. All tests were two-sided, and P value <0.05 was considered to indicate statistical significance. All statistical analyses were processed with the software SPSS version 26.0 (IBM, SPSS Inc., Chicago, IL, USA). 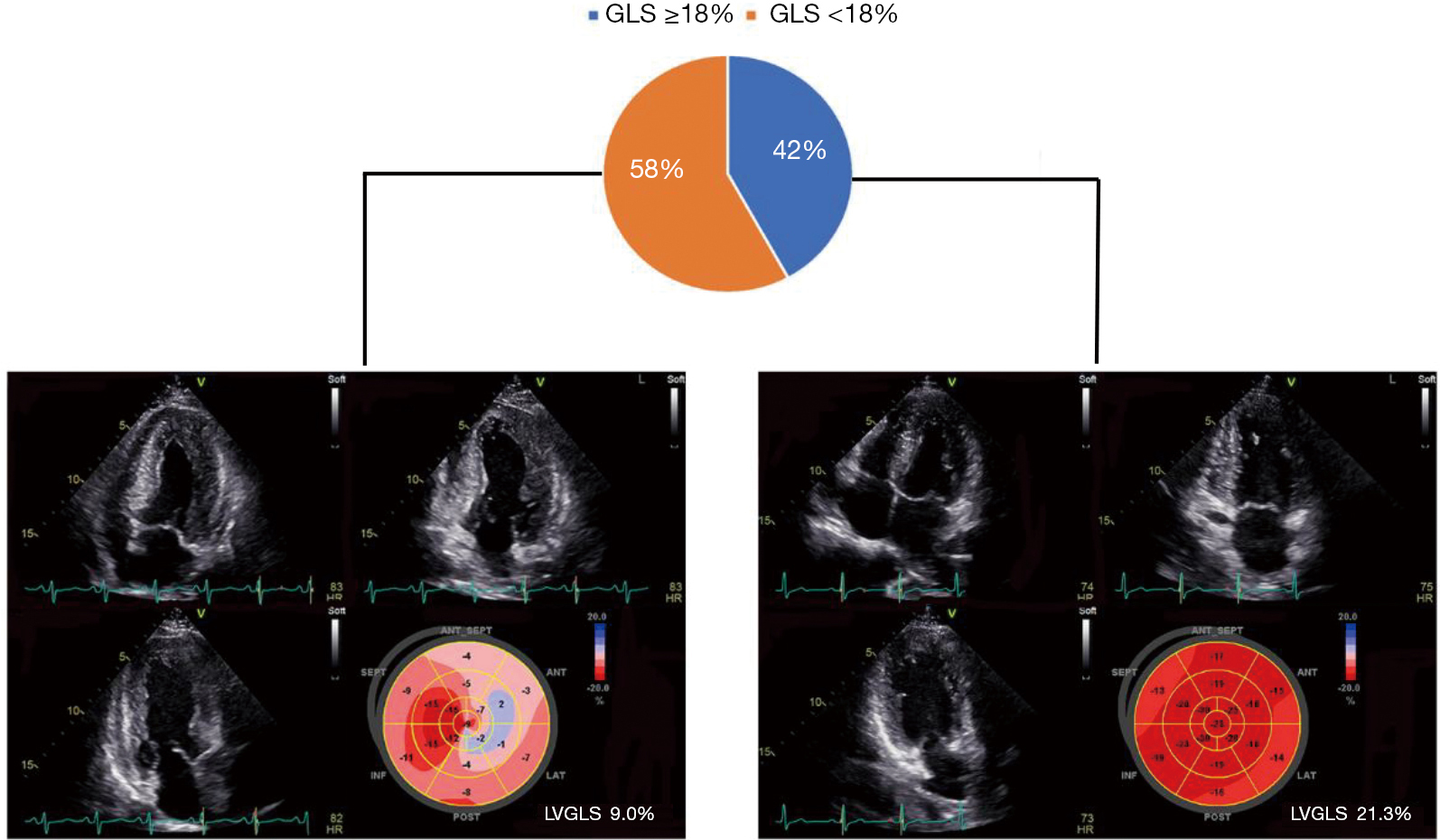 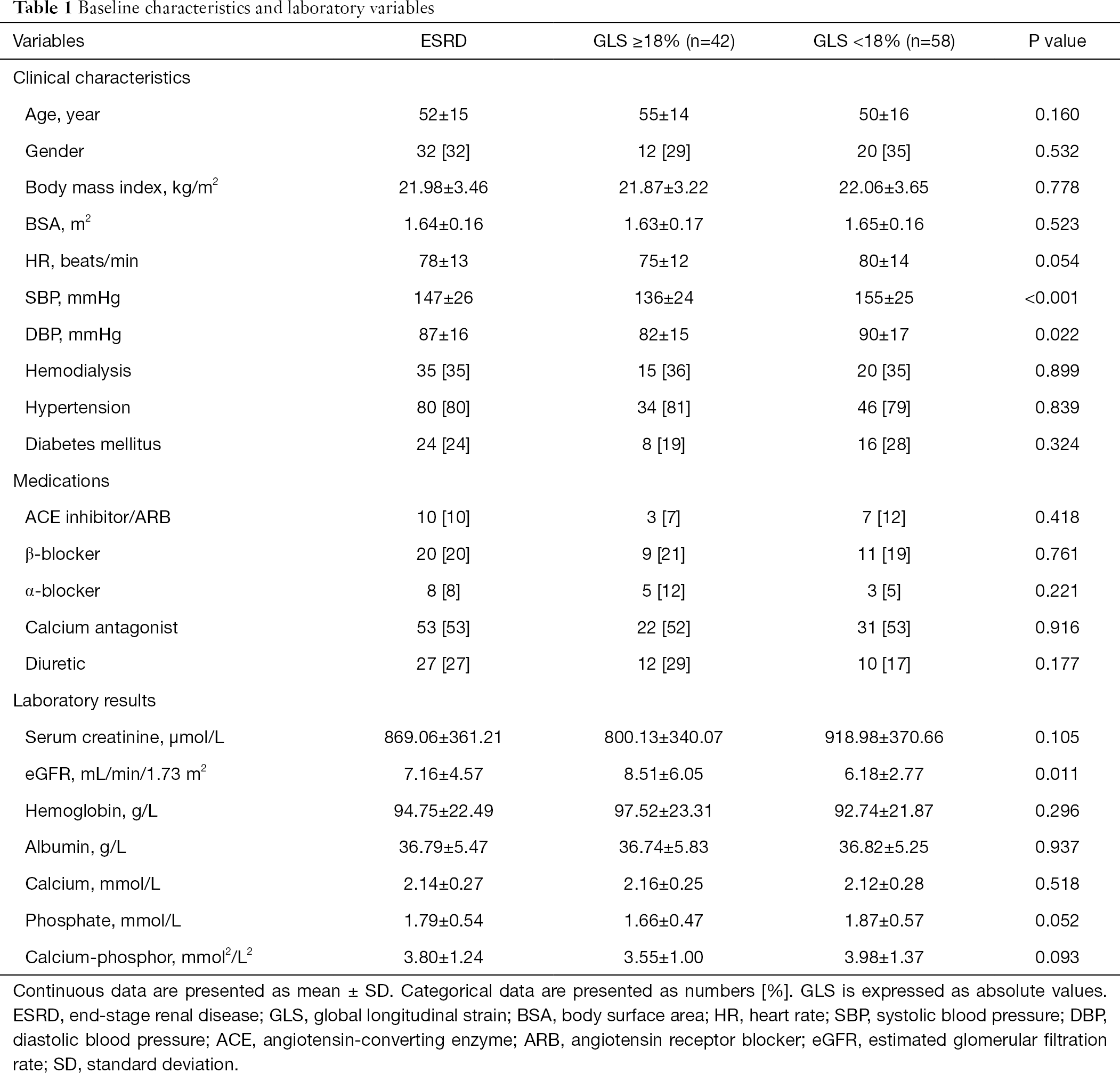 Echocardiographic parameters for patients with GLS <18% and GLS ≥18%

Association of LV geometry and clinical parameters with GLS 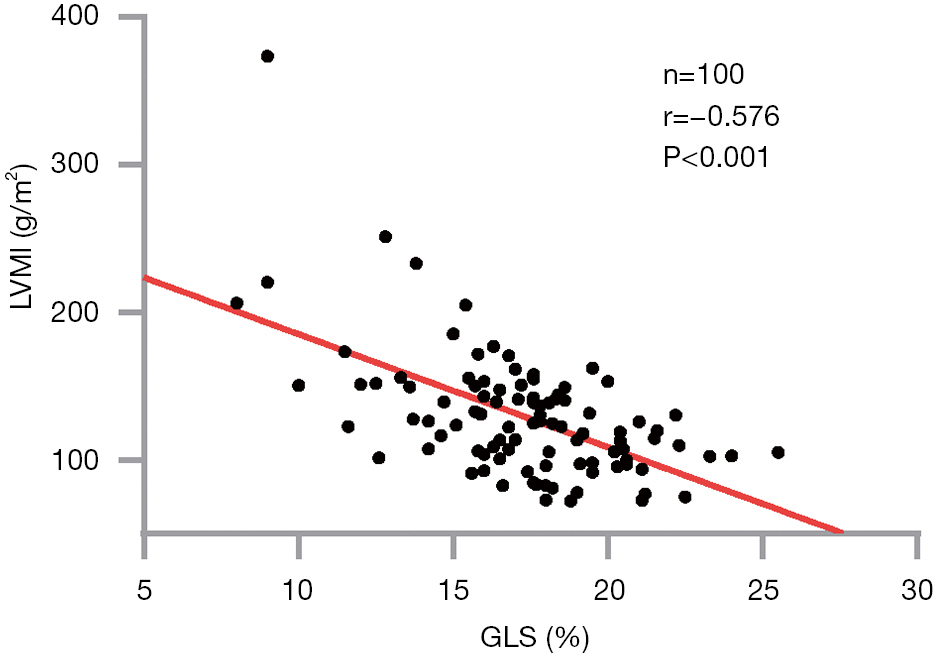 Univariable and multivariable analyses were performed to determine independent factors associated with impaired GLS (Table 3). In univariable analysis, SBP, DBP, eGFR, LVEF, LVEDD, LVESD, IVSd, PWTd, LVMI, and E/e' ratio were associated with GLS <18%. Parameters with P value <0.1 or clinical relevance on univariate analysis were incorporated into the multivariate analysis. To avoid multicollinearity, IVSd, PWTd, and LVEDD were not included in the multivariable analysis. By further multivariate analysis, an increased LVMI was independently associated with GLS <18% [odds ratio (OR): 1.028; 95% confidence interval (CI): 1.004–1.052, P=0.020]. A sequential logistic analysis for predicting GLS <18% was done, starting with multivariate logistic regression (model 1: SBP, DBP, eGFR, LVEF, LVESD, E/e'), and LVMI was added to model 1 via stepwise block analysis to assess its incremental value. Model 1 (χ2=30.0) was improved by the addition of LVMI (χ2=37.4, P<0.01), as shown in Figure 3. 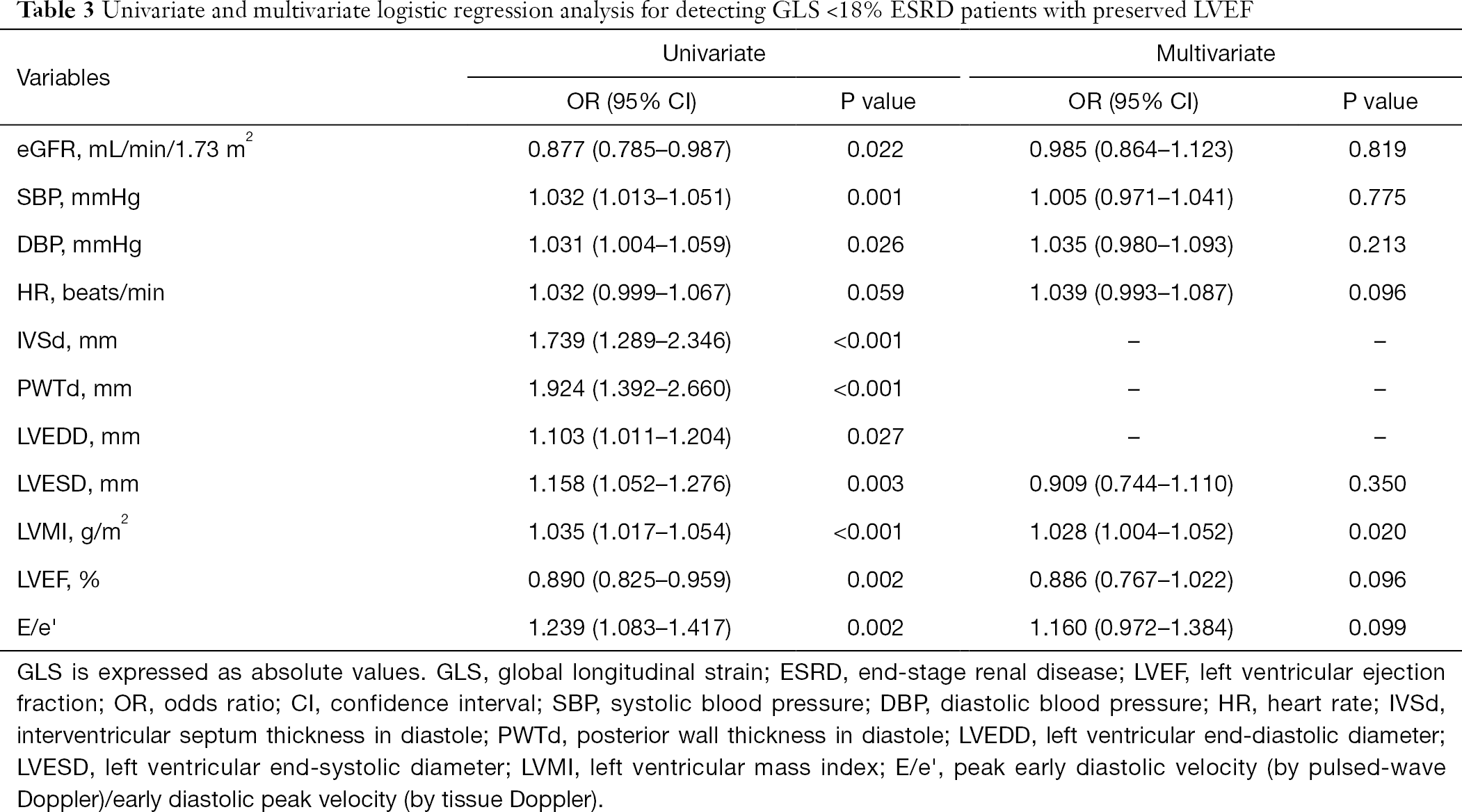 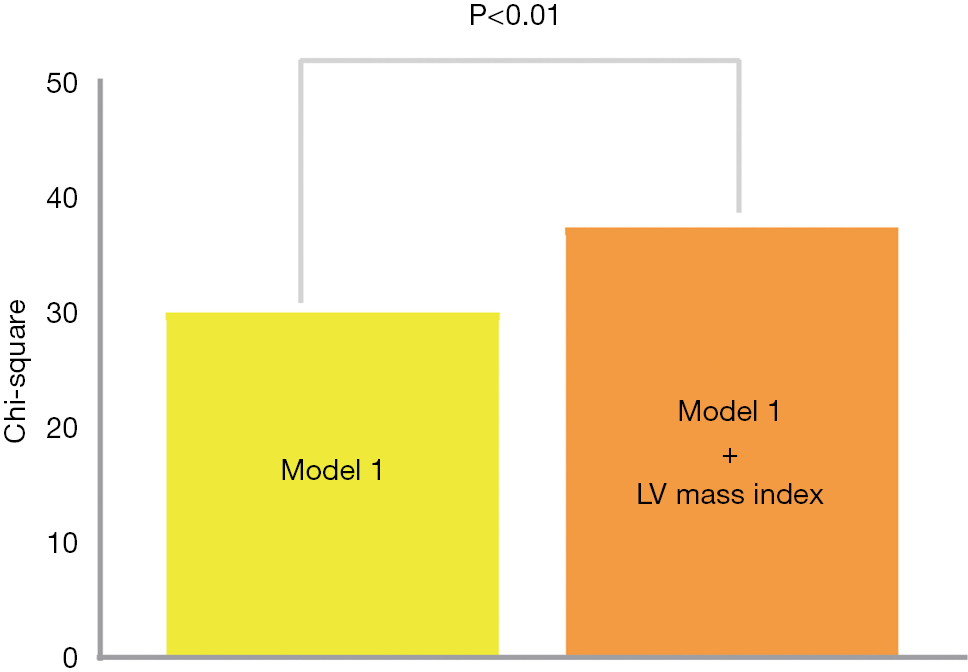 The present study’s major finding was that the frequency of LV systolic dysfunction in ESRD participants with preserved LVEF was relatively high. Over half (58%) of ESRD participants showed LV systolic dysfunction, defined by LV GLS <18% in normal LVEF. Compared to participants with LV GLS ≥18%, LV geometry was larger or thicker in those with LV GLS <18%. An increased LVMI was independently associated with abnormal GLS, which was consistent with previous studies (6,16,17).

Impaired LV GLS in ESRD patients without overt heart failure

Our study exhibited a high proportion of impaired GLS, with 58% (58/100) incidence among ESRD patients, which was similar to previous reports describing impaired LV GLS in ESRD patients with preserved LVEF. In a study by Huang et al. study (7), 42% (80/190) of hemodialysis participants had LV longitudinal systolic dysfunction defined as GLS <16%. Similarly, Rhea et al. reported 47% (66/139) of advanced chronic kidney disease (CKD) participants as impaired GLS (determined as GLS <18%) (15). The difference in the incidence of abnormal GLS in CKD patients with retained LVEF may depend on patient characteristics, such as the severity of renal function and dialysis availability. The main pathophysiological explanation may be that LV longitudinal dysfunction reflected early CKD-related myocardial changes such as myocardial ischemia, hypertrophy, and fibrosis because subendocardial longitudinal myocardial fibers were susceptible to reduced coronary perfusion and increased wall stress (18,19). Similarly, GLS was also shown to enable the detection of subclinical myocardial dysfunction of many CVDs, including hypertension and ischemic heart diseases (20).

In our study, increased LVMI was independently associated with abnormal GLS in ESRD participants with preserved LVEF, which was concordant with previous studies (6,16,17). The increase of LVMI suggested varying degrees of LVH, which was a common sequela in ESRD. Wang et al. and Nardi et al. have reported the prevalence of LVH as 74.5% and 73.7% of ESRD patients, respectively (17,21). The development of LVH was virtually attributed to the presence of all of these factors (arterial hypertension, volume expansion, calcium-phosphate metabolic abnormalities, arterial stiffness, anemia, and activation of the renin-angiotensin-aldosterone system) (22). As expected, in our analysis of 68 (68%) cases of ESRD with LVH, the prevalence of LVH in patients with GLS <18% was relatively higher than that of GLS ≥18% (50% vs. 81%). Compared to ESRD patients with non-LVH, GLS was significantly decreased in patients with LVH, suggesting that reduced GLS was closely associated with LVH. From the pathophysiologic standpoint, the close correlation between decreased GLS in ESRD and larger LVH/LVMI can be explained as follows: pathological myocardial hypertrophy induced the activation of cellular apoptotic and autophagic signals that increased collagen production within the extracellular matrix (ECM), leading to myocardial fibrosis (MF) (23). Increasing levels of MF led to ventricular stiffening, thereby impairing the systolic and diastolic function. In contrast, higher blood pressure (higher afterload) was not an independent factor for detecting GLS <18%, although it frequently existed in ESRD. The reason was most likely that hypertension was not the only driver in reducing GLS in patients with ESRD. In early-stage CKD, higher blood pressure remained the driving force behind the development of LV systolic dysfunction, but its influence diminished as the CKD stage progressed to ESRD (24).

Our findings indicated that a significant proportion of ESRD patients without overt heart failure have asymptomatic systolic longitudinal myocardial dysfunction. This high proportion of cardiac abnormalities requires close follow-up to detect the early development of heart failure and strictly control cardiovascular risk factors, including rigorous control of blood pressure for more stable and tightly controlled volume load, and early application of drugs to reduce MF [angiotensin-converting enzyme (ACE) inhibitors and β-blockers] to improve ventricular remodeling. Guidelines recommend an echocardiogram for all dialysis patients 1–3 months after renal replacement therapy initiation and every 3 years subsequently (25). Our opinion is that all newly admitted ESRD patients should undergo a comprehensive echocardiographic examination including GLS, and follow-up with serial studies at shorter intervals of 12–18 months should be necessitated as it seems to add prognostic value (26,27). Also, we believe that repeat echocardiography after about 6 months is useful for risk stratification with symptomatic changes, new clinical events, or treatment likely to affect cardiac function (27). It remains to be studied whether shorter repeated echocardiographic monitoring, including GLS, conveys comparable prognostic information.

This study had some limitations. First, there were a relatively small number of ESRD participants from a single study center. Second, the study was cross-sectional, making the findings’ prognostic significance unclear and requiring further verification. Finally, the study did not include a healthy control group. A more comprehensive analysis may be needed.

Funding: This study was supported by grants from the Key Science and Technology Research Project of the Department of Education, Jiangxi Province (190002), and the Postgraduate Innovation Special Fund project of Nanchang University (CX 2019135).

Conflicts of Interest: All authors have completed the ICMJE uniform disclosure form (available at http://dx.doi.org/10.21037/qims-20-1034). The authors have no conflicts of interest to declare.

Ethical Statement: This study was approved by the Ethics Committee of the Second Affiliated Hospital of Nanchang University and individual consent for this retrospective analysis was waived. This study was performed in accordance with the World Medical Association Declaration of Helsinki.