A sedentary lifestyle and chronic over-nutrition are the leading causes for the increasing rates of overweight, metabolic syndrome and subsequently type 2 diabetes in many countries around the globe (1-3). The metabolic syndrome is associated with fat deposition in the liver, and eventually with the occurrence of nonalcoholic fatty liver disease (NAFLD) (4), which is a main cause of chronic liver disease (5). Specifically, patients with NAFLD are at high risk of developing liver fibrosis and liver cirrhosis leading to irreversible liver dysfunction and eventually are at high risk for liver carcinoma or other fatal complications (6). It is well known that early fat deposition in the liver caused by over-nutrition and the lack of exercise is reversible (7,8). Therefore, tracking liver fat changes in patients with NAFLD is important for both risk assessment and treatment.

Measuring liver fat is feasible using either invasive or non-invasive methods. Liver biopsy is considered the gold standard for measuring liver fat in single locations (9). However, since liver biopsy is highly invasive, its use in longitudinal studies can be associated with strong discomfort for the patient and other complications. Single-voxel magnetic resonance spectroscopy (MRS) has been shown to be a very reliable way of non-invasively measuring the liver proton density fat fraction (PDFF) (10). However, single-voxel MRS has limited spatial coverage as it typically reports the result on one specific area of the liver per measurement. Therefore, neither biopsy nor single-voxel MRS can cover the whole liver and therefore cannot detect any heterogeneity in liver fat deposition. In addition, repetitive measurements could become difficult to perform using techniques with limited spatial coverage, since the selection of the exact same region during the measurement at different timepoints is more difficult to execute.

Magnetic resonance imaging (MRI)-based PDFF mapping has been alternatively emerging as a reliable and accurate technique for spatially resolving liver fat fraction non-invasively. MRI-based PDFF has been validated as a biomarker in comparison with MRS and biopsies (11,12). MRI-based liver PDFF mapping adds the advantage of spatially covering the whole organ with adequate resolution and therefore enables the investigation of liver fat distribution throughout the whole organ taking into consideration any differences between the individual Couinaud liver segments. In addition, as the whole liver is covered during the scan, placing of regions of interests (ROI) after the scan can be easily compared to previous measurements of the same subject, which is important for longitudinal measurements.

Multiple cross-sectional studies have reported heterogeneous liver fat distribution across different lobes and segments (13-16). Recently, Fazeli Dehkordy et al. (17) showed, based on PDFF mapping, a heterogeneity in liver fat distribution both at baseline and after bariatric weight-loss surgery and reported right lobe segments having higher PDFF at baseline and a more rapid reduction in liver PDFF than left lobe segments. In this study, all subjects lost weight after surgery and showed a decreasing PDFF across all liver segments and lobes. However, it is not known how the spatial distribution of the PDFF is changing in a longitudinal setting, where subjects participating in a long-term lifestyle intervention study might either gain or lose weight during the intervention.

The purpose of our study was to study the spatial heterogeneity of PDFF changes in subjects participating in a long-term lifestyle intervention study and show variable changes in body weight.

Thirty-two subjects (18 women and 14 men) participating in a German wide prospective, randomized, multicenter lifestyle intervention study at the Else Kröner-Fresenius-Center for Nutritional Medicine, Technical University of Munich, with MRI scans at two different time points within a time interval of one year were included in the present analysis. Inclusion criteria were age between 18 and 75 years and a high risk of developing diabetes mellitus type 2 by scoring more than 50 points in the screening questionnaire “German Diabetes Risk Test” (18). The subjects received nutritional counseling for one year covering multiple appointments. It included discussing nutritional protocols, information and recommendations on healthy eating and moderate energy restriction for losing weight, and individual guidance for more exercise. Further inclusion and exclusion criteria and more details about the intervention can be found at (19). The present dataset includes 17 subjects scanned before the beginning of the intervention and after 1 year and 15 subjects scanned after the end of the intervention at two time points with an interval of 1 year when weight regain was frequently occurring.

The study was approved by an ethics committee and all subjects gave written informed consent before participation in the study including repeated MRI scanning. MRI was performed on a whole-body-MRI-scanner (Ingenia, 3.0T, Philips Healthcare, Best, The Netherlands) using the built in 12-channel posterior and 16-channel anterior coil.

Complex multi-echo gradient-echo images were generated and provided as input to the fat quantification algorithm provided by the vendor (mDixon Quant, Philips Healthcare), including the following steps: a phase correction step was performed first to address eddy current-induced phase errors. Field inhomogeneity-induced misregistration effects and chemical shift-induced mis-registration effects were minimized by using the maximum receiver bandwidth. A complex-based water-fat decomposition was performed next using a single T2* correction and a pre-calibrated fat spectrum accounting for the multi-peak nature of the fat spectrum. A seven-peak fat spectrum model was used (20). The PDFF map was computed as the ratio of the fat signal over the sum of fat and water signals and the magnitude discrimination approach was used to reduce noise bias effects (21).

In each Couinaud segment (22) of the liver, a circular ROI with a diameter of 20 mm (volume of ~1,885 mm3) was placed by a researcher (JS) with 2 years of experience in liver segmentation with 3D Slicer as described by Tang (23). Liver PDFF was calculated per ROI in each segment. Mean liver PDFF was calculated as the mean of all ROIs from each segment. For mean PDFF of left liver lobe (LLL), the mean PDFF of the ROIs of segments I, II, III, IVa and IVb, and for the right liver lobe (RLL) of the segments V, VI, VII and VIII, respectively, were calculated.

Statistical analyses were performed with RStudio [RStudio Team (2016). RStudio: Integrated Development for R. RStudio, Inc., Boston, MA, URL http://www.rstudio.com/]. Linear regression was calculated with Pearson correlation coefficient analysis with 0.05 level of significance. Two-sided paired t-test was used to calculate differences in fat content between liver lobes with 0.05 level of significance. A statistical test was performed to compare the slope between PDFF changes in the LLL and mean PDFF changes and the slope between PDFF changes in the RLL and mean PDFF changes, using a z statistic defined by the difference between the slopes of the regression lines divided by the standard error of the differences between the slopes (24). The intraclass correlation coefficient (ICC) was used to calculate inter-observer agreement. 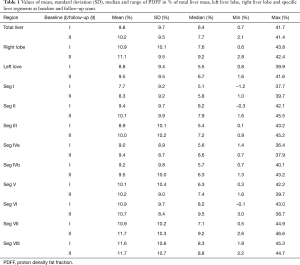 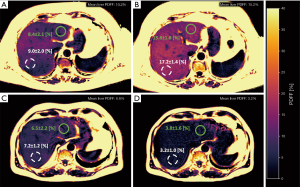 Figure 2 Changes of the liver PDFF in the LLL (A) and the RLL (B) as a function of mean liver PDFF change. The right lobe shows larger liver PDFF changes compared to the left lobe, visualized by the slopes of the regression line. PDFF, proton density fat fraction; LLL, left liver lobe; RLL, right liver lobe. 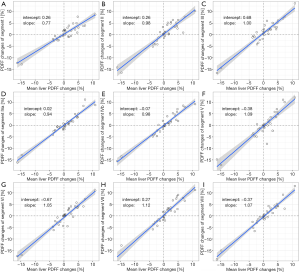 Liver fat deposition assessed by biopsy is known to be spatially heterogeneous (15,16) and liver PDFF has been reported as being spatially heterogeneous in previous studies (13,14). To address the above spatial heterogeneity of liver PDFF, different ROI sampling methods have been reported in the literature (25,26). The present method adopted the ROI sampling method introduced in (23). Inter-observer analysis in the present work showed high agreement between the two observers.

Despite some evidence for spatial heterogeneity of liver PDFF in a cross-sectional setting (15,16), only a few studies have characterized how heterogeneous PDFF changes may behave in longitudinal studies. In a previous study by Fazeli Dehkordy et al. (17), it was shown that subjects with decreasing liver PDFF following bariatric surgery have a larger liver PDFF decrease in the right lobe compared to the left lobe. The results of the present study are in agreement with the study by Fazeli Dehkordy et al. Additionally, the present study shows that liver PDFF changes in the RLL contribute stronger to mean liver PDFF changes in subjects with both increasing and decreasing liver PDFF.

The exact reasons for the observed heterogeneous changes in liver PDFF remain unclear. A common explanation suggested by other studies reporting on heterogeneous liver PDFF distribution is the difference in perfusion of the respective liver segments (13,17). Specifically, different studies have tried to explain the heterogeneous liver fat distribution by differences in venous blood flow in the portal vein depending if the blood’s origin was mesenteric or splenic. However, the above studies show mixed results and do not offer a clear explanation for the heterogeneous PDFF distribution in the liver (27-29). Despite the lack of a definite explanation for the observed spatial heterogeneity in liver PDFF changes, the present study is in line with previous studies reporting an inhomogeneous segmental and lobar liver fat distribution in subjects with NAFLD (13,14) and advocates for a high spatial resolution PDFF measurement with whole liver coverage to more accurately assess liver fat changes.

The present study has several limitations. First, the present study included participants with different levels of compliance during and after the lifestyle intervention, resulting in subjects with both increasing and decreasing mean liver PDFF over the one-year observation period. However, the key intention of the present study was to investigate regional liver PDFF changes in subjects with longitudinal mean liver PDFF changes. An additional analysis of the weight changes between the group scanned before the beginning of the intervention and after 1 year and the group scanned after the end of the intervention at two time points with an interval of one year showed no statistical differences in the extent of weight change between the two groups. Second, regional liver analysis was based on ROI drawing as suggested in previous studies (25,26) and no whole liver segmentation was performed. Third, the sample size of the present study was small and further studies are required to verify the results in larger cohorts.

Heterogeneous long-term liver PDFF changes in the left and right lobe and the liver Couinaud segments were observed in subjects scanned longitudinally during and after a long-term lifestyle intervention study with significant weight fluctuations. Given a mean liver PDFF change, the RLL, and segments in this area, showed larger PDFF changes compared to the LLL and the respective segments. Therefore, liver PDFF measurement methods with high spatial resolution and whole liver coverage should be used to track liver fat fraction heterogeneity changes in longitudinal studies.

Funding: The present work was supported by the European Research Council (grant agreement No. 677661, ProFatMRI), the German Research Foundation (DFG-SFB824/A9) and Philips Healthcare. Additional funding was provided by the German Center for Diabetes Research (BMBF: 01GI0925).

Ethical Statement: The study was approved by an ethics committee and all subjects gave written informed consent before participation in the study including repeated MRI scanning.