Figure 1A shows a schematic of the conventional PACT, which can collect only PA waves propagating towards the transducer array. The acceptance angle of each element is limited by the angular spread function, which is usually less than 60 degrees for high-frequency linear transducer arrays because of the relatively large ratio of the element width to the acoustic wavelength. Therefore, in Figure 1A the horizontal boundary segments with detectable PA waves propagating along the –x direction can be reconstructed well, while the vertical boundary segments with undetectable PA waves propagating along the ±y direction cannot be reconstructed. To broaden the detection view, a 45-degree planar acoustic reflector was used to recover the vertical boundaries (18) (Figure 1B). With the aid of the acoustic reflector, the PA waves propagating along the –y direction are redirected to the –x direction, and then received by the transducer array. While a single acoustic reflector can double the detection view, it is not enough to cover a full 360 degrees, even for large acceptance angle transducer elements. Naturally, one can add more reflectors to further extend the detection view and recover more boundaries. Figure 1C shows acoustic reflectors set at an included angle of 120 degrees. Each reflector functions individually by redirecting the originally undetectable PA waves back to the transducer array elements, and together they recover more boundary features than a single reflector. In theory, two reflectors may cause multiple acoustic reflections between them. However, we did not observe obvious artifacts caused by multiple reflections in experiments, possibly due to reflection loss and acoustic attenuation, which rendered the multiple reflected signals negligible. 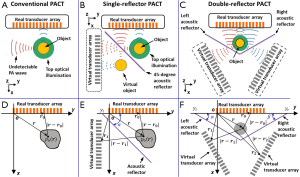 We experimentally tested the single-reflector PACT and double-reflector PACT using the aforementioned reconstruction algorithm. A 532 nm wavelength laser illuminated the target from the –z to +z direction (top illumination), as shown in Figure 1. The laser beam was generated from a second harmonic generator (OPOTEK Inc., Carlsbad, USA) pumped by a Nd:YAG laser (Brilliant, Quantel, Bozeman, USA) with 1064 nm output. This laser has a repetition rate of 20 Hz and an average pulse energy of 30 mJ. By using an engineering diffuser, the laser beam was expanded to a diameter of 1.6 cm on the top surface of the target, and therefore the laser fluence was 15 mJ/cm2. A high-frequency linear transducer array with a central frequency of 15 MHz and a bandwidth of 9-18 MHz (MS200, Visualsonics Inc., Toronto, Canada) detected the PA waves. The MS200 linear transducer array has 256 elements, with a pitch of 125 μm and an effective detection aperture of 32.00 mm. The axial resolution (x-axis) in PACT was experimentally measured to be 113 μm, and the lateral resolution (y-axis) was 257 μm at a depth of 11 mm in water. The MS200 array also has a cylindrical acoustic lens with an elevational focal length of 18 mm and an elevational resolution of 1.2 mm in the elevational focal zone. The hypotenuse of an optical prism (PS911, Thorlabs Inc., Newton, USA) was used as the acoustic reflector for the single-reflector PACT. For double-reflector PACT, glass slides were used to reflect the PA waves. The prism and slides were made of BK7 glass, which has an acoustic impedance 10 times greater than that of the immersion liquid, and hence has a reflection coefficient close to unity. Although the amplitude and phase of the reflected acoustic wave change within the critical reflection angle of 26 degrees, here for simplicity we neglect this complexity and treat all reflections as total reflection without amplitude or phase change. As only a small amount of the signal comes from reflection within the critical angle, our assumption does not severely affect the structural image quality. In future quantitative studies, we will develop a more rigorous algorithm to account for this effect.

In our study, both the direct and reflected PA waves were detected by the MS200 transducer array, which was connected to a commercial PA imaging system (Vevo LAZR, Visualsonics Inc., Toronto, Canada). The 256 signal channels were multiplexed to a 64-channel data acquisition system, resulting in an imaging speed of 5 Hz. The raw channel data were then transferred to a PC where the FBP algorithm was applied to reconstruct PACT images.

We first imaged a simple hair phantom as shown in Figure 2A. Three straight human hairs (labelled as “1-3”) were embedded in a roughly triangular and planar arrangement in a 3% w/w agar gel. The generated PA waves propagated primarily along three directions at 120 degrees relative to each other, as indicated by blue arrows in Figure 2A. Figure 2B is the reconstructed PA image acquired by the conventional PACT. The horizontal hair labelled as “1” was recovered, but hairs 2 and 3 were missed due to the limited view. Figure 2C is the corresponding PA image acquired by the single-reflector PACT. While hair 1 was also reconstructed clearly, hairs 2 and 3 started to appear with obvious artifacts. Figure 2D shows the corresponding PA image acquired by the double-reflector PACT, where all three hairs were recovered clearly. 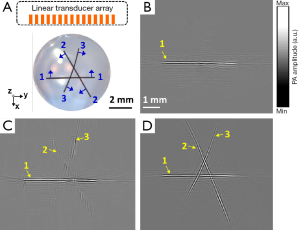 To quantitatively study the detection view enhancement, we imaged the cross-section of a tubular plastic drinking straw phantom in the x-y plane. The tube had an inner-diameter of 7.3 mm and a wall thickness of 0.15 mm. The circular tube generated PA waves in all 360 degrees in the 2D imaging plane, equivalent to the angular range from a point source at the center of the circle. Thereby we could quantitatively study the detection view of the three PACT systems. Figure 3A shows the PA image of the circular tube acquired by the conventional PACT, where the circle center was located at 11 mm away from the transducer surface. Both recovered top and bottom arcs have ~40 degrees of aperture with respect to the center, and this angle represents the receiving angle of the conventional PACT with respect to the circle center. Here the receiving angle is limited by two factors: the azimuth angle of the entire transducer aperture and the effective receiving angle of each individual transducer element. Because the azimuth aperture angle is ~55 degrees and the receiving angle of each transducer array element was experimentally measured to be ~40 degrees, the transducer element receiving angle is the limiting factor in this case. Figure 3B shows the reconstructed circular tube phantom imaged with the single-reflector PACT system. Compared with Figure 3A, there are two more arcs, so the detection view of the linear-array-based PACT has increased from 80 to 160 degrees, doubling the detection view of the conventional PACT system. Figure 3C shows the same circular tube phantom image acquired by the double-reflector PACT system. It is obvious that the detection view has been triply increased, from 80 to 240 degrees.

To verify the detection view enhancement, we imaged a complex phantom, a dehydrated leaf skeleton (Figure 4A). Compared with the hair phantom in Figure 2A, the leaf phantom has a rich vascular network and more complex features. Figure 4B shows a reconstructed image of the leaf phantom with the conventional PACT. Only boundaries close to the horizontal direction were recovered. Figure 4C shows an image of the phantom acquired by the single-reflector PACT. Some vertical boundaries were recovered, but there are still many unrecovered features. Figure 4D shows a double-reflector PACT image, which recovers most of the features identifiable in the photograph in Figure 4A. 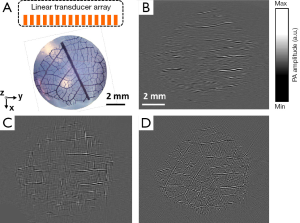 By using two acoustic reflectors, we tripled the detection view angle of a linear-array-based PACT system, from 80 to 240 degrees, while maintaining the imaging speed. We introduced virtual transducer arrays into the image reconstruction plane to remove the boundaries created by reflectors, and then we applied the FBP algorithm for image reconstruction. Imaging a complex phantom demonstrated the enlarged detection view angle of the double-reflector method. Double-reflector reflector PACT may prove valuable in biomedical imaging studies where both high image quality and high imaging speed are desired.