The number of clinical fetal MR scans is rapidly increasing due to the increase in high risk pregnancies, increased awareness of the diagnostic advantages of fetal MRI and improvement in accessibility to MRI scanners (1-5).

In vivo fetal MR imaging remains very challenging due to the movement of the fetus and the respiratory motion of the mother. Because of this, 3D acquisitions are currently difficult to apply to fetal imaging. When fetal MRI is performed in the second trimester, as frequently occurs in the United States, fetuses generally have plenty of room to move, often resulting in motion corrupted images. When fetal MRI is performed later in gestation, the fetuses have less room for motion, however the mother can be very uncomfortable during the scan and usually has a difficult time holding still. This physical motion compounds the imaging of the fetus. Since the introduction of fast spin echo (FSE) methods in the early 1990’s (6,7), few other reliable techniques have been successfully applied to the clinical imaging of fetuses. Current clinical protocols involve quick scouting scans for placement and re-orientation, and T2-weighted FSE or single-shot FSE (SSFSE) scans for quick capture of images before the fetus moves.

These techniques are not fast enough to be unaffected by both the maternal and fetal motion. In addition, these scans are generally signal starved and suffer from T2 blurring due to long echo train acquisition. Because of the limitation of motion, a fetal MR scan often requires extra time in order to achieve enough number of images that have diagnostic value, as a large percentage of the images are motion corrupted and discarded.

Morphometric techniques to combine images acquired in various planes have been investigated in order to generate 3D post-processed images of the fetal brain (8,9). After post-processing, images of excellent quality can be produced, but it is difficult to ensure all imaging features were maintained through extensive image processing methods. In addition, such methods can only be applied after the clinical data is acquired, and usually is not processed in a timely manner enough to affect clinical practice.

This study presents a novel fast 3D fetal imaging technique to alleviate the challenge of the moving fetus. Image data is acquired during a continuous scan when the mother breaths freely. The proposed 3D imaging technique provides motion robustness and time-resolved image reconstruction. Time-resolved 3D images are reconstructed by using view sharing image reconstruction whose footprint can be flexibly chosen. The motion of the fetus is captured with these images, from which the images with minimal fetal motion can be selected retrospectively. The proposed method provides isotropic in-plane spatial resolution and high through-plane resolution, which allows reformatting of the 3D image volume at arbitrary orientations. Our preliminary results obtained with this novel time-resolved 3D (also called 4D) fetal imaging technique demonstrate the visualization of the fetal brain and body.

All of the MRI scans were compliant with the Health Insurance Portability and Accountability Act (HIPAA) and the study was approved by the Committee on Human Research (CHR) of the University of California, San Francisco. Written informed parental consent was obtained.

Conventional MRI usually acquires data on Cartesian grid, where sample points distribute uniformly in k-space. Non-Cartesian acquisition strategies such as spiral and radial sampling have also been widely used due to their unique features. Radial acquisition has advantages of motion robustness, high acceleration, and flexibility for time-resolved image reconstruction with k-space center acquired at every TR (10,11). A multi-echo radial sampling in the kx-ky plane with Cartesian slice encoding has been developed for 3D balanced Steady-State Free Precession (bSSFP) cardiac cine imaging (12,13). The multi-echo acquisition collects image data during the modified dephasing and rephrasing gradient pulses where the conventional method does not acquire data, thus it provides high data acquisition efficiency. In addition, the image data acquired at different echo times allow fat suppression effect or water and fat separation, which improves visualization of the anatomy of interest (13,14). The golden-ratio based projection profile has been proposed for radial acquisition to achieve approximately uniformly distribution of the radial lines at distinct angles, which allows flexible retrospective time-resolved image reconstruction with arbitrary temporal resolution at arbitrary time points by exploiting view-sharing (15). In this study, this custom built multi-echo 3D hybrid radial sequence was applied to image the fetus while the mother breathed normally. Data was collected continuously to catch motion during the scan time. The acquired data was reconstructed retrospectively given a footprint to generate multiple time frames (Figure 1).

The acquired MR data was processed using off-line Matlab (The MathWorks, Natick, MA) programming on a Macbook Pro (Processor 2.4 GHz Intel Core i5, Memory 4 GB). Data was segmented into 20 time frames given the footprint of 9 s. Time-resolved 3D images were achieved by reconstructing the segmented data with an iterative temporal filtering (16), which in an optimal way, shared the undersampled k-space data at high frequencies from adjacent time frames. Regridding has been used for interpolating the non-Cartesian radial sampling data (17).

The reconstructed 3D images were interpolated to have an isotropic spatial resolution (both in- and through-plane), and were reformatted at different orientations of interest with Osirix Imaging Software (OsiriX Foundation, Geneva, Switzerland).

Time-resolved 3D fetal images were successfully acquired and reconstructed from three subjects. With a temporal resolution of 9 s, 20 time frames were reconstructed for the data acquired from each subject. Figure 2 shows the time-resolved images of a fetus at 22.86 weeks gestational age. Seven representative time frames of the axial, sagittal and coronal views of the fetal brain are displayed. It can be observed that the fetus was moving during the scan (note movement at the 13th time frame).

Figure 2 Time-resolved 3D fetal images were acquired during a 3-minute scan. A total of 20 frames were reconstructed, with a temporal resolution of 9 s. Seven representative frames at every four frames are shown in the axial, sagittal and coronal planes. It can be observed that the brain has turned slightly towards the midline over the course of the scan. 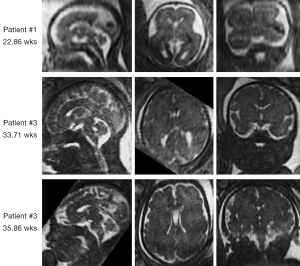 Figure 4 shows the visualization of the fetal lungs and heart at 33.71 gestational weeks at a representative time frame. The 3D imaging of the lungs (Figure 4A) could be used to provide measurements of fetal lung volumes. The trachea is full of fluid and appears hyperintense with bSSFP acquisition that provides T2-like contrast. Although no ECG-gating was applied for tracking the fetal heart beating yet, the time-averaged (through cardiac cycle) fetal heart could be captured (Figure 4B). 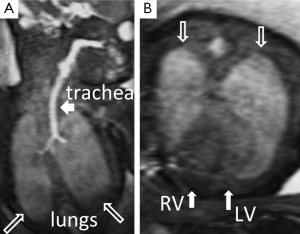 Our preliminary results demonstrate that 3D images of fetus can be successfully acquired even as early as 22.86 gestational weeks using the time-resolved imaging method. Using this method, the resulting images have minimal motion blurring and major features of the fetal brain, heart and lungs are readily identifiable.

3D imaging offers higher SNR efficiency, continuous imaging of the slab of interest, and near isotropic voxels for improved visualization in oblique orientations, however, due to longer imaging time it may confront more motion compared to a single slice 2D imaging. This study demonstrated the feasibility of time-resolved 3D fetal imaging with the developed approach, focusing on presenting its technical properties instead of evaluating its clinical application. A full evaluation of this technique against clinical settings will be conducted in a future study. In this study, we have applied bSSFP acquisition and achieved T2-like contrast mechanism. With proper preparation pulses, we can exploit our current technique to achieve various contrast mechanisms for specific clinical applications (2).

Advanced image reconstruction method such as compressed sensing and parallel imaging (18,19) could be applied to the current technique to further shorten the scan time, improve the spatial/temporal resolution, or improve the coverage to image the entire fetus during one scan.

The image acquisition of this study was similar to the work in (12,13), but the post-processing did not including the self-gating procedures and has been modified to generate time-resolved images instead of CINE images. As shown in Figure 1, it segments the data into multiple time frames given a footprint (such as 9 s used in this study). Since the radial acquisition has the advantage of averaging the motion in-plane (x-y plane), within a single time frame either mild rotational or translational motion projected in x-y plane should be tolerated. At time frames with large motion, the images obtained with the proposed approach may contain certain degree of geometrical distortion due to averaging of the signals throughout the motion. At the retrospectively selected time frames with minimal motion, we assume that the geometrical distortion is negligible. For extreme cases when no time frames could be chosen as motion-free, longer scan time might be needed or a real-time setup could be helpful.

With the golden-ratio profile acquisition in the proposed technique, the acquired data can be flexibly chosen and combined to provide best visualization of the fetus by optimizing the tradeoff between the SNR and motion blurring (12,15). In this study, since the data acquired for individual time frame was undersampled, to achieve sufficient image quality we have to limit the undersampling factor thus limit the temporal resolution, A temporal resolution of 9 s was empirically chosen to provide reasonable image quality for our current study, however, it can also be adjusted according to the actual motion of the individual subject. Furthermore, the temporal resolution should get higher with advanced image reconstruction methods.

In this study, we have obtained reasonable image quality by applying an image reconstruction window of 9 s. With the radial acquisition, we gained motion robustness by frequently acquiring k-space centers. However, the image reconstruction window of 9 s is long enough to include some of the mother’s and fetus motion, thus residual motion artifacts still exist at each time frame. Advanced image reconstruction methods could further improve image quality such as one employed by the Studholme group (8,9). The mother’s motion may include voluntary and/or respiratory motion that can be considered to be translational with respect to the fetus. Cartesian mapping of the k-space centered along the slice encoding direction provides intensity-weighted position information, from which the translational motion presented within the FOV can be tracked and used for gating (12). Since the mother’s respiratory motion, cardiac motion, and fetus’ cardiac motion superimpose but occur at different frequencies, the proposed technique has the potential to provide not only the mother’s respiratory and cardiac gating, but also fetus’ cardiac gating. The gating signals are derived from the image data and are also useful for motion compensation.

The fetus’ motion is momentary and can be both translational and rotational. With the time-resolved 3D images, the fetus’ movement cross the time frames can actually be registered by deriving the rigid transforms (both translation and rotation) between time frames. Image registration of these time-resolved 3D images can be explored to further improve the image quality and data acquisition efficiency. To further improve image quality, higher temporal resolution and higher spatial resolution  (≤1 mm isotropic) need to be further evaluated.

One of the major challenges for fetal heart imaging is fetal cardiac gating, which is not currently implemented in this study but will be investigated in our future work. Radial acquisition has the great advantage of motion robustness by averaging the signals throughout the motion. Although the residual blurring exists, this study showed the feasibility of imaging the fetal heart without cardiac gating. However, the fetal cardiac gating is critical and necessary for generating diagnostic images for clinical use.

The computation time for generating the time-resolved 3D image data was about 20 minutes, using off-line Matlab programming on a Macbook Pro. This computation time could be significantly reduced by optimizing the current coding, using high performance computing clusters, and applying parallel computing technique.

In conclusion, in this study time-resolved 3D fetal imaging was achieved within a fairly short scan time while the mother breathed freely. Images of the fetus can be retrospectively selected to capture the time point with minimal motion artifacts.