Retinopathy of prematurity (ROP) is a common cause of blindness, which afflicts neonates both in the United States and throughout the world today. Visual loss secondary to ROP is on the rise. Approximately 32,000 patients with ROP go on to develop visual impairment and permanent vision loss each year (1). Advancements in technology and infrastructure have led to improved survival of premature infants, which increases survival in individuals at risk for developing ROP (1). ROP is a vasoproliferative disorder that occurs in preterm infants due to disruption of normal development of the retina and its vasculature. While ROP can spontaneously regress in many cases, it can also lead to severe vision impairment and blindness due to retinal detachment. Screening eye examinations are essential for the timely diagnosis of ROP to prevent vision threatening consequences. Indirect ophthalmoscopy by an experienced ophthalmologist continues to be the mainstay of ROP screening, although wide-field retinal fundus photography is an acceptable alternative (2).

We have developed a prototype handheld OCT with a 200 kHz sweeping laser and a ranging distance of 12 mm (6). The prototype probe includes novel operator-assistance features such as a direct-view iris camera to more quickly center the probe, on-probe OCT display to maintain operator attention on the infant, and animated fixation targets in the probe to attract the infant’s attention. This prototype also has high-speed OCTA angiography (OCTA) functionality. OCTA, a recent development in OCT imaging, allows for detailed quantification of the retinal vasculature without intravenous injections (7-10). A retinal vascular proliferative process is likely detectable by OCTA, and so analysis of OCTA images in infants with ROP may contribute to our understanding and diagnosis of this disease.

This was a prospective, observational study carried out at the University of Washington Medical Center (UWMC) in Seattle, Washington, and was approved by its Institutional Review Board. Handheld SS-OCT/SS-OCTA images were obtained from inpatients at the time of routine ROP examinations in the Neonatal Intensive Care Unit (NICU). Written consent was obtained prior to image acquisition from the parents or guardians of all study participants. This study was performed in accordance with the tenets of the Declaration of Helsinki.

An investigational, miniature handheld SS-OCTA device (Figure 1) was used in this study (6). The device was designed for use in clinical settings for imaging young children and infants, providing rapid, non-invasive structural and angiographic imaging of retina and choroid. Briefly, this device contained a 1,051 nm swept-source laser capable of an imaging speed of 200,000 A-scans per second (200 kHz) that enables acquisition of 3D OCT and OCTA images with a scan time of 0.8 and 3.2 s, respectively. The scanning angle on pupil was up to ±36°, approximately a 6.3×6.3 mm2 scan pattern, covering the full perifoveal region. Compared to 3 mm for a typical SD-OCT, the device provided a ranging distance of 12 mm that facilitated imaging in awake infants by allowing the operators to identify regions of interest within an acceptable time frame (a few seconds). The handheld probe included a unique pupil-finding feature, known as an iris viewer, which allowed for rapid positioning and alignment of the OCT probe with the optical axis of the infant’s eye (see the insert of Figure 1A). Additionally, a real-time high-definition screen was available on the probe. Since the screen is mounted on the probe, the operator did not need to look away from the subject while positioning the probe and optimizing image quality, which improved infant safety and imaging efficiency. The total weight of the probe assembly was 948 grams. Finally, imaging was performed without the need for an eyelid speculum.

Figure 1 Swept source OCT system prototype designed for pediatric use, where built-in mini-screen on the handheld probe facilitates the imaging procedure. (A) Photograph of the full assembly of the system; insert is a typical screen shot from iris view during imaging operation; (B) photograph of the handheld probe; (C) simplified section view showing some functions on the probe that are adjustable by the operators during imaging. Unique features built into the probe include an iris view for rapid positioning and alignment of the OCT probe with the optic axis of the subject’s eye.

Study participants were infants undergoing routine ROP screening: infants less than 30 weeks gestational age, and/or less than 1,500 g birth weight, or selected infants with a gestational age greater than 30 weeks with an unstable clinical course (at the discretion of the neonatologist). All participants underwent SS-OCT and SS-OCTA imaging following pharmacologic pupillary dilation on the same day as their routine ROP screening examinations using indirect ophthalmoscopy. The imaging schedule was dictated by the ROP screening examination schedule, which was determined by the treating ophthalmologist and based on standard screening criteria. Each premature infant underwent between 2 and 7 exams with SS-OCT and OCTA, 1–2 weeks apart. The ophthalmologists performing the eye examinations were masked to the results of the SS-OCT and OCTA while determining ROP stage.

Images were obtained on awake, unsedated infants. No eyelid speculum was used. One to two drops of a mixture of 1% phenylephrine hydrochloride and 0.2% cyclopentolate ophthalmic solution (Cyclomydril, Alcon Laboratories, Geneva, Switzerland) were used to dilate the pupils before image acquisition. Four hundred B-scans (cross sectional OCT images) were acquired per volume (one scan across the eye). There were approximately two to five volumes taken per eye during each imaging session so as to maximize the quality of the foveal and optic nerve images taken. In some cases, an oral sucrose solution was administered to improve infant tolerance of the imaging. OCT images were generated using conventional OCT processing steps (11), and OCTA images were generated using a validated optical microangiography algorithm (12-14).

Two trained independent masked graders (YM and AL) viewed scans from all imaging dates for each infant. For each eye, the best quality OCT volumes including the optic nerve and foveal center were chosen and evaluated for presence or absence of several features of the retina and vitreous. Characteristics evaluated by the graders included punctate hyperreflective vitreous opacities, vitreous bands (tractional or non-tractional), ERM, CME, vessel elevation, scalloped retinal layers, hyporeflective vessels, and retinal spaces. A third trained, masked grader (MTC) reviewed all disagreements as the tie-breaker.

OCTA imaging was processed following usual convention, where image segmentation is performed on entire retinal volumes to separate the vascular networks into different layers (15). In this study, the retina was segmented into two layers: the superficial retina from ganglion cell layer (GCL) to inner plexiform layer (IPL), and the deep retina from inner nuclear layer (INL) to external limiting membrane (ELM). Maximum intensity projection was provided for visualizing blood vessel networks in the en face view. False color maps of retinal vasculature were produced by coding superficial retinal vasculature as red and deep retinal vasculature as green to better visualize the depth-resolved vasculatures (16).

As described by Maldonado et al., several specific OCT B-scan vascular features are predictive of plus disease in ROP and are components of the Vascular Abnormality Score on OCT (VASO) (17). These include vessel elevation, scalloped retinal layers, hyporeflective vessels, and retinal spaces. Vessel elevation was defined as any spiked, pointed vessel easily distinguished from the normal smooth retinal surface found in subjects who did not have severe ROP. Scalloped retinal layers were defined as an inner plexiform layer or outer plexiform layer that appeared ruffled. Hyporeflective vessels were defined as vessels with dark lumina that cast shadow columns upon the underlying retinal layers. Retinal spaces were defined as the presence of hyporeflective spaces adjacent to vessels. In contrast to hyporeflective vessels, retinal spaces did not create shadowing and represented areas of acute angulation of vessels. All VASO findings were graded only if found 1/2 disk diameter or further from the optic disk margin.

Figure 2 Typical examples of high-quality B-scan images extracted from 3D OCT scans obtained from (A) the fovea, and (B) the optic nerve. Note that the extracted images were single B-scans without averaging involved. The subject was an infant with gestational age 26 3/7 weeks, stage 2 ROP, no plus disease and postmenstrual age 37 1/7 weeks at time of imaging. White scale bar =500 µm. OCT, optical coherence tomography; ROP, retinopathy of prematurity. 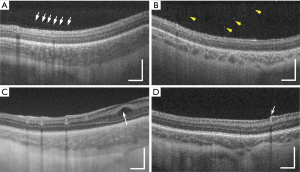 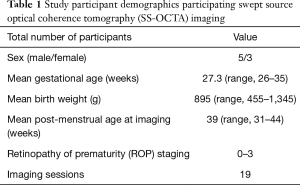 Figure 4 provides typical examples of the OCTA images acquired from the deep and superficial retinal layers, together with the en face OCT images generated from all retinal layers. With this 6.3×6.3 mm2 wide-field scan format, OCTA reveals the large retinal arteries and veins; however, capillaries are not as clearly delineated as in normal adult OCTA imaging (18-20). Nevertheless, the OCTA image may still provide valuable information regarding vessel area density, complexity, tortuosity, dilation and non-perfusion area. 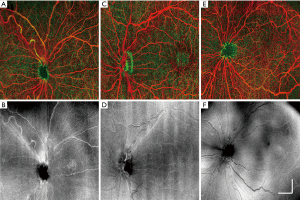 We have demonstrated that this novel handheld SS-OCT device with angiography capability can capture high-quality structural vitreoretinal images in 69/73 (94.5%) imaging sessions of 12 awake, premature neonates. We were also able to obtain high-quality en face retinal angiographic images of the macular microvasculature in 11/19 (58%) imaging sessions of 6/8 (75%) awake, premature neonates. While other investigational handheld OCT devices have demonstrated imaging in awake infants (21,22), ours is the first to include a unique pupil-finding capability as well as a real-time on-probe monitoring screen.

This device also successfully captured high-quality images of key structures previously documented in premature infants using handheld SD-OCT imaging, including some associated with ROP severity. Known potential ROP severity biomarkers captured successfully by our prototype include punctate hyperreflective vitreous opacities and vitreous bands, both tractional and non-tractional (4). Additionally, this device demonstrated vascular features known to be associated with ROP severity, such as vessel elevation (17). Therefore, this device has the potential to provide insight into ROP severity that may ultimately inform management.

There are several advantages of this prototype over the currently available handheld SD-OCT, including greater imaging speed, greater usability of the handheld probe due to pupil and B-scan visualization, higher vitreous and choroidal detail, and angiography capability. We have demonstrated all of these functions in awake premature infants without the use of an eyelid speculum or ocular contact. Limitations of our study include small sample size and an infant population that lacked advanced ROP. Greater rates of advanced ROP may be associated with poorer imaging success due to greater media opacity, systemic illness and lower imaging tolerance.

In summary, we have presented a novel, handheld swept-source optical coherence tomography device with angiography capability that can capture important vitreoretinal features, some of which are associated with ROP severity. The device is user-friendly, well-tolerated in the premature infant population, and has the potential to identify important ROP pathophysiologic and diagnostic features in at-risk premature infants.

Conflicts of Interest: Dr. Wang discloses intellectual property owned by the Oregon Health and Science University and the University of Washington. Dr. Wang also receives research support from Carl Zeiss Meditec Inc, Moptim Inc, Colgate Palmolive Company and Facebook Technology LLC. He is a consultant to Insight Photonic Solutions and Carl Zeiss Meditec. The other authors have no conflicts of interest to declare.