After the invention and development of an ultrasound (US) machine in late 1950s, it has been used for diagnostic purposes throughout the developed world in various specialties and most obviously in obstetrics and gynecology field (1,2). Diagnostic US was utilized in screening for pregnant women and it was extensively used for decades (1-3). However, the increase of power outputs and extended time of scans along with weaker regulations for the use of US machine has caused it to become increasingly difficult to ignore the contribution of increasing fetal US exposure during recent decades (3-5). Thus, the potential thermal and non-thermal insults or injury are also increased (1,3,4,6). In the official statements of the American Institute of Ultrasound in Medicine (AIUM) advocates the prudent use of prenatal US is strongly restricted for nonmedical usage as such for entertainment purposes including fetal viewing, obtaining fetal images or even fetal gender screening without clinical indications (7).

There are several sources that might contribute into knowledge or information regarding US bioeffects, including the mechanisms of action of US, epidemiological studies in human, experimental studies in animal (in vivo) and cell studies (in vitro) (8). Two components in the mechanisms of action of US which produce bioeffects are heating and cavitation. The parameter that determines the estimation of temperature tissue rise is thermal index (TI) and it should be kept at less than 0.5 as proposed by Barnett et al. (9) for nonmedical use of US as such for entertainment purposes without clinical indications. While the parameter that determines the likelihood of cavitation occurring is mechanical index (MI), which should be at less than 0.4 in medical use (10) and as low as 0.3 in nonmedical use (9). TI and MI are not sole indicators responsible for thermal and non-thermal bioeffects that occur following to US insonation, but these indexes are currently accepted as potential risk’s estimators (11).

The primary concern of diagnostic US in obstetrical examination is tissue heating (1,12). The heating effects are the results of the absorption of US energy from an US beam (13). The heating effect is highly dependent on absorption coefficient of insonated tissue and because bones have high absorption coefficient values (12-14), it tends to absorb 60 percents or more of the incident US energy. During 3rd trimester of pregnancy, fetal bones are almost completed since it has reached the final stage of organogenesis. The surrounded soft tissues are the responsible area for an inevitable rise of temperature during insonation (13) which can go up to a factor of five (4). It is considered hazardous when embryo and fetus have been exposed to US for five minutes or more, as this will elevate both embryonic and fetal temperature to 4 °C above the normal body temperature (12). Large body of evidence has also proven that heat stimulates the abnormalities in studied animal and the sensitivity varies throughout gestational stages. For example, neuronal tube closure and neurogenesis of central nervous system have been noted to become hypersensitive to thermal injury (4,15,16) and even 2 °C elevation of temperature may develop anomaly or defect (17).

The non-thermal effect (mechanical effect) of US insonation causal to acoustic cavitation is defined as the production of bubbles in liquid that may exhibit behavioral of collapse and contribute to sudden release of energy (8,12). Mechanical effect is also regarded as any biological effect from US when accompanied by elevation of temperature less than 1 °C above normal physiologic levels (18). It might then disrupt the molecular bonds and release free radicals that consequently interfere with DNA (deoxyribonucleic acid) of the cells and lead to chromosomal damage (12,19). As there are thermal and non-thermal effects of US, hence this study aimed to assess the association between US exposure time and blood constituents such as red blood cell (RBC) count, white blood cell (WBC) count, haemoglobin (Hb) concentration and platelet (PLT) count in newborns of Oryctolagus cuniculus.

This in vivo experimental study involved the use of eight female New Zealand White rabbits (Oryctolagus cuniculus). Two does (female rabbit) served as controlled group while the rest were categorized as treated group. The research was carried out in Animal Handling Research Laboratory, Universiti Teknologi MARA (UiTM), Puncak Alam Campus. The ethical approval was obtained from Committee on Animal Research and Ethics (UiTM CARE).

All pregnant does were treated equally with all external factors were kept constant (surrounding temperature: 28 °C, humidity: 60-65%). Good ventilation was provided by using BioGS air purifier, from RabbitAir, USA to evacuate harmful gases released by rabbits such as CO2 (carbon dioxide) and NH3 (ammonia) (20,21). This was critical to prevent incidental confounding factors that might affect the validity of subjects since the goal was to access the heating effect of US to a fetus in a womb.

US exposures of 30, 60 and 90 minutes were used as a teratogen, given prenatally to pregnant does at the middle of 3rd trimester pregnancy, gestational day (GD) 28-29. Gestational period was varied between 31-33 days (22). For control group, no US exposure was given. This study used Philips HD3 US machine from Koninklijke Philips N.V, Netherlands 2D operating at B-mode pulsed-US.

With an exception of the lengths of exposure time (e.g., 30, 60, 90 minutes), US parameters such as transducer frequency, focal distance, TI and MI were kept constant. Transducer of linear array, L 5-9 with the ability to transmit frequency between 5 until 9 MHz was used. Focal distance was kept constant at 4.5 cm throughout the experiments. The displayed TI and MI values were 0.2 and 1.0, respectively. The output power and intensities, spatial peak temporal average intensity (ISPTA) of US were varied from 0.4 to 0.7 W and 0.13 to 0.19 W/cm2 respectively when measured in water for durations of 30, 60 and 90 minutes of US exposures. The parameter of interest were usually determined in free-field experimental conditions where there were without reflectors or other disturbances to an ultrasonic field (23). When soft tissue replaced water along the ultrasonic pathways in researcher’s real experiment involving animal subject as a model, a decrease in intensity was expected, mainly because of soft tissues had much higher rate of attenuation as compared to water (24,25) and also with the probability of fetal bones presented in the studied area.

Forty-eight newborns were analyzed for full blood count (FBC) using haematology analyzer Coulter LH 500 from Beckman Coulter Inc. United States. Blood were drained by method of cardiac puncture using 23G sterile needle and 3 mL sterile syringe to subjects and collected in 5 mL purple cap EDTA (Ethylene Diamine Tetraacetic Acid) tubes. The tubes were gently mixed by inverting the specimens 5-10 times and were placed on automatic rotator for 15 minutes for the blood to properly mix with the anticoagulant content of EDTA tube wall. Then, they were transferred to the haematological laboratory in 2-8 °C to stabilize the blood for complete blood count analysis. The analysis must be performed within 24 hours (4 °C) after the blood withdrawal for the purpose of obtaining reliable and accurate results (26). The parameters that had been taken into account were RBC count, WBC count, Hb concentration and PLT count.

Statistical Package for the Social Sciences, SPSS version 21.0 was used to analyze the data, to make inference and draw robust conclusions. 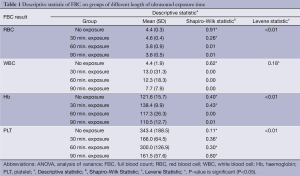 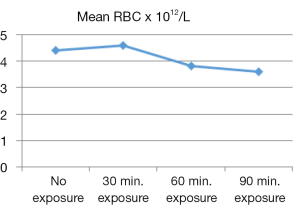 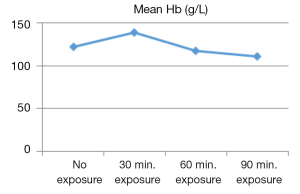 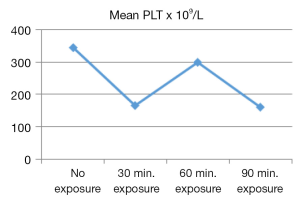 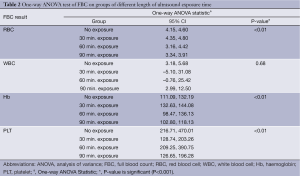 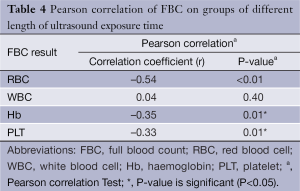 As supported by S. B Barnett, slight increase in temperature of embryonic and fetal above normal body temperature even at 4 °C elevation for five minutes of US exposure or more was considered hazardous (12). Damage to erythrocytes, haemolysis were even reported upon microwave heating in blood cells (29). In haemolysis, blood cell will become microcytic and together can develop iron deficiency (26). Hb is an iron containing compound that transports oxygen in blood. This explains why Hb concentration is also affected when RBCs undergo haemolysis. Furthermore the results of these findings were also supported by earlier research done by S.M. Dom. It was found that RBC mean value was significantly differed when US exposure was given at 3rd trimester pregnant Oryctolagus cuniculus as compared to control group with no US exposure (30). More US energy was absorbed and converted to heat by bones that had high absorption coefficient (12-14). As the insonation was given during 3rd trimester of pregnancy, the amount of fetal bones were at the highest at this time as they were highly developed in which complete organogenesis in fetus had occurred.

The findings of this in vivo experimental study suggest that there are effects on newborn of Oryctolagus cuniculus’s full blood count constituents, such as RBC count, Hb concentration and PLT count when prenatal US exposure have been given on 3rd trimester pregnant female Oryctolagus cuniculus. This scientific information can be applied in the field of US application for its safety and prudent use. This result can also be utilised to inspire other researchers to further investigate diseases that are anticipated to be associated later in life among those who had been exposed to prenatal US during fetal age.