High resolution imaging is important for accurate characterization of pathological abnormalities of biomedical specimens. Given the excellent axial resolution in three-dimensional (3D) imaging (1-4), optical coherence tomography (OCT) has been extensively used in retinal examination, vascular medicine (5,6), and dermatological study (7,8), etc. Axial resolution of the OCT is dependent on the spectral bandwidth of the selected light sources; while lateral resolution of the OCT is diffraction limited (9). In coordination with careful optical designs (10,11) and adaptive optics (AO) (12), OCT imaging can be implemented at diffraction limit (13). However, quantitative OCT imaging is till challenging due to the resolution limit to resolve individual cells or even sub-cellular structures. In principle, the resolution can be improved by increasing the numerical aperture (NA) of optical systems. However, the working distance, i.e., imaging depth, of an optical instrument can be dramatically reduced as increasing NA. Moreover, the available NA is not changeable in some situations. For example, retinal imaging is limited by optical quality, including the NA which has the maximum ~0.25, of the eye. Therefore, alternative strategies have to be considered for resolution improvement. Several numerical strategies such as deconvolution algorithms (14-17) and digital focusing (18) have been explored to improve the lateral resolution of OCT. Although digital deconvolution has the potential in theory to exceed the diffraction limit for OCT imaging (15-17), the accurate estimation of the point spread function (PSF) of the OCT system, which is required for deconvolution, is practically challenging. So far, a feasible strategy of super-resolution OCT imaging is still yet to be demonstrated.

Structured illumination microscopy (SIM) has been demonstrated to break through optical resolution limited by light diffraction. However, spatially structured wide field illumination is not suitable for scanning laser imaging modalities, such as OCT. In theory, an alternative strategy to the SIM is to combine spatial and temporal modulations, either by spatiotemporal modulation of the scanning laser profile (in the illumination path) or the recording light profile (in the detection path) (19). However, physical implementation of the illumination/detection modulation is difficult. So far, experimental validation of the proposed spatiotemporal modulation is not yet demonstrated. We recently demonstrated a virtually structured detection (VSD) based super-resolution scanning laser microscopy (SLM) to achieve resolution doubling (20). Without the complexity of structured illumination, VSD provides an easy, low-cost and phase-artifact free strategy to achieve super-resolution imaging. The purpose of this study is to demonstrate the feasibility of breaking diffraction-limited resolution in OCT imaging through VSD. OCT examination of optical resolution target verified resolution enhancement in the VSD based imaging. Super-resolution OCT identification of individual frog photoreceptors was validated to demonstrate the potential of resolution enhancement in retinal imaging. We anticipate that further development of the VSD based OCT can provide an easy, low cost strategy to achieve sub-cellular resolution tomography of the retina and other biological systems.

Figure 1 shows the diagram of the VSD based super-resolution OCT. A near infrared superluminescent diode (SLD-351, Superlum) with a center wavelength λ =830 nm and band width Δλ =60 nm was used to illuminate the sample. A dual-axis galvo (GVS002, Thorlabs) was used to scan the focused illuminating light across the sample in a raster pattern and descan light reflected from sample to the light detector. We used a two-dimensional (2D) digital camera (Pike F-032B, Allied Vision Technologies) to replace the single element sensor in conventional time-domain OCT. In the reference arm, neutral density filters were applied to adjust light intensity. A glass block was inserted into the reference arm to compensate for optical dispersion (21) of the electro-optic phase modulator (EOPM, Model 350-50, Conoptics), which was employed to introduce rapid vibration free phase modulation for OCT reconstruction (22). Briefly, EOPM shifted reference beam light phase by 0, π/2, π and 3π/2 at each scanning position. Four corresponding interference patterns were recorded at each scanning position for OCT reconstruction. The axial resolution of the system was ~4 µm (0.44 λ2/nΔλ, where n was the refractive index of the sample, ~1.4). With a 0.1 NA 5× objective, lateral resolution of conventional OCT was theoretically estimated at ~5 µm (0.61 λ/NA). In theory, the VSD can improve the resolution by a factor of 2 (19,20,23). A virtual pinhole (two times of the Airy disc diameter) was applied during reconstruction. 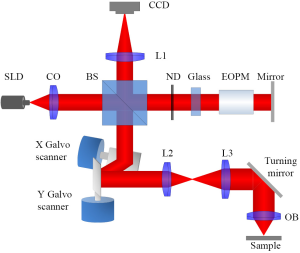 Principle of the VSD based OCT

For simplicity, formulas will be written in one-dimension. During the OCT recording, the reference mirror was adjusted to a position where the zero delay plane is superimposed with the focal plane. First, the standard four-frame phase-shifting algorithm is applied to retrieve OCT images (24). By ignoring optical magnification, the interference pattern (in X direction) recorded by the camera at a given scanning position x0 is

According to the standard four-frame phase-shifting algorithm (24), we will have

If we assume the reference intensity profile is spatially invariant within the virtual pinhole:

and constant coefficients are ignored, the Eq. [3] can be simplified as:

The second step is to apply VSD to break through diffraction limit of lateral resolution. Details of VSD have been reported in our recent publication (20). Briefly, a digital sinusoidal mask m(x) is applied to multiply with the OCT profile map:

The spatial integral of Eq. [6] yields:

where hil and hde are PSFs of the illumination beam and detection beam, respectively, and s is the reflectance ratio of the sample. Fourier transforming Eq. [7] yields:

We can see that if the carrier frequency of

is smaller than the cutoff frequency of

, the convolution in Eq. [8] can shift the high frequency of the sample toward the lower frequency to pass through

We used a standard optical resolution target (USAF 1951 1X, Edmond) and freshly isolated frog (Rana Pipiens) for experimental validation of the proposed VSD based OCT system. The optical resolution target provided a simple sample for technical validation of the OCT resolution. In contrast to simple optical target, frog retina had relatively complex 3D structures. The diameter of frog photoreceptor rod was 5-8 µm and that of cone was about 1-3 µm (25,26), which provided an excellent model to test OCT resolution before (5 µm) and after (2.5 µm) VSD data processing. All animal handling procedure was approved by the Institutional Animal Care and Use Committee of the University of Alabama at Birmingham. Frog used for preparing freshly isolated retina was firstly euthanized by rapid decapitation and double pithing. Then eyeball was detached and moved to Ringer’s solution [containing (27) in mmol/L: 110 NaCl, 2.5 KCl, 1.6 MgCl2, 1.0 CaCl2, 22 NaHCO3, and 10 D-glucose]. After hemisecting the eyeball with fine scissors, lens was removed and the retina was separated from the eyecup. Dissected retina was then moved to a chamber filled with Ringer’s solution for image recording. All procedure was conducted in a dark room illuminated with dim red light.

After we tested super-resolution OCT using the optical resolution target, we implemented super-resolution OCT imaging of freshly isolated frog retina. Figure 3A shows a cross-section image of freshly isolated frog retina acquired by conventional OCT. With ~4 µm axial resolution, we could clearly see retinal layer structure which consisted of inner plexiform layer (IPL), inner nuclear layer (INL), outer plexiform layer (OPL), outer nuclear layer (ONL) and photoreceptor layer (PRL). Enface images were acquired at the inner segment of PRL (yellow dashed line in Figure 3A) which rendered strong OCT signal and rich structure details. Comparing Figure 3B to Figure 3C, we can see that in Figure 3C more cellular structures could be observed. For example, three individual photoreceptors could be identified (three white arrows in Figure 3C), while only a single blur structure could be visualized at the same area in Figure 3B. Resolution enhancement was also confirmed by comparing light intensity profiles. The green and red curves in Figure 3D corresponded to normalized intensity profiles along the green line in Figure 3B and the red line in Figure 3C, respectively. Two individual cells were separated on the red curve (white arrows in Figure 3D), while they merged together on the green curve.

In summary, we demonstrated that VSD can be implanted in OCT imaging to break through the diffraction limit. OCT imaging of optical resolution target (Figure 2) and frog retinal photoreceptors (Figure 3) showed noticeable resolution improvement. Detailed structures that were not identified in conventional OCT images could be readily resolved in super-resolution OCT images through the VSD. Although the VSD based method can be implemented in an imaging system with a high magnification objective, we selected a relatively low magnification objective (5×) in this study for technical validation of super-resolution imaging of frog photoreceptors. Since frog retina consists of photoreceptors with variable diameters (rods: ~5-8 µm; cones: ~1-3 µm) (26,27), it provided an excellent preparation to evaluate the OCT resolution before (5 µm) and after (2.5 µm) VSD data processing.

The imaging speed of our current super-resolution OCT is relatively slow (40 s per frame). The VSD imposes a spatially resolved detector to record the diffraction profile of each scanning position, which is time-consuming and infeasible for in vivo retinal imaging due to possible eye movements during the recording. Currently, we are integrating a microlens array (MLA) based multifocal scanning system (29) to improve the speed of super-resolution OCT imaging. We anticipate that further development of the VSD based OCT can provide a practical strategy to achieve super-resolution in in vivo OCT imaging of retinal structures.