Intravoxel incoherent motion (IVIM) refers to the random microscopic motion that occurs in voxels on magnetic resonance (MR) images of water molecules (either intra-cellular or extracellular) and the microcirculation of blood. Le Bihan et al. (1-3) proposed the principle of IVIM which enables the quantitative parameters that separately reflect tissue diffusivity and tissue microcapillary perfusion to be estimated. Recently there has been a great interest in using IVIM technique to study diffused liver diseases such as liver fibrosis (4,5). Due to its relatively high blood supply, the liver is a very suitable organ for IVIM study. However, the liver is in the meantime particularly affected by physiological motions such as respiration and heart beating; meanwhile, the left liver is also affected by susceptibility artefact due to contents in the stomach. Although the theory of IVIM is very appealing, the practical application in the liver is difficult (5). In the case of liver fibrosis evaluation, reported results have been conflicting. Scan-rescan reproducibility can be unsatisfactory for quantification of the perfusion compartment of Dfast and perfusion fraction (PF), while Dslow may not be sensitive to pathological change (5-9).

IVIM analysis without b=0 data

With most of the reported IVIM analyses, the diffusion image signal decay is computed starting from b=0 s/mm2 image and then increasingly higher b-values using biexponential decay model. However, this decay process may not follow biexponential model for region of interest (ROI) based analysis. While, due to the respiratory motion and low signal-to-noise ratio, we favor ROI-based analysis for liver IVIM as opposed to voxel-wise analysis. As demonstrated in Figures 1-3, the signal difference between b=0 s/mm2 image and b=1 or b=2 s/mm2 images can be very substantial, the vessels (including small vessels) particularly show high signal without diffusion gradient while show dark signal when the diffusion gradient is on even at b=1 s/mm2. In our two published studies we dealt with this difficulty by ignoring the b=0 images, and take the assumption that the remaining signal vs. b-value relationship follows bi-exponential decay (10,11). This simplistic approach seems worked well in our cases. In our study-2 when we tested including b=0 s/mm2 image for curve fitting, there were large measurement variations among healthy subjects, and patients’ measurements partially overlapped with the healthy subjects’ results. Thus the data of these two groups could not be separated (11). On the other hand, when we excluded b=0 s/mm2 image for curve fitting, fibrosis patients’ measurement and healthy subjects’ measurement can be separated (11). The initially analyzed a few healthy volunteers and liver fibrosis’s result from our study-3 are shown in Figure 4, confirming our experience. 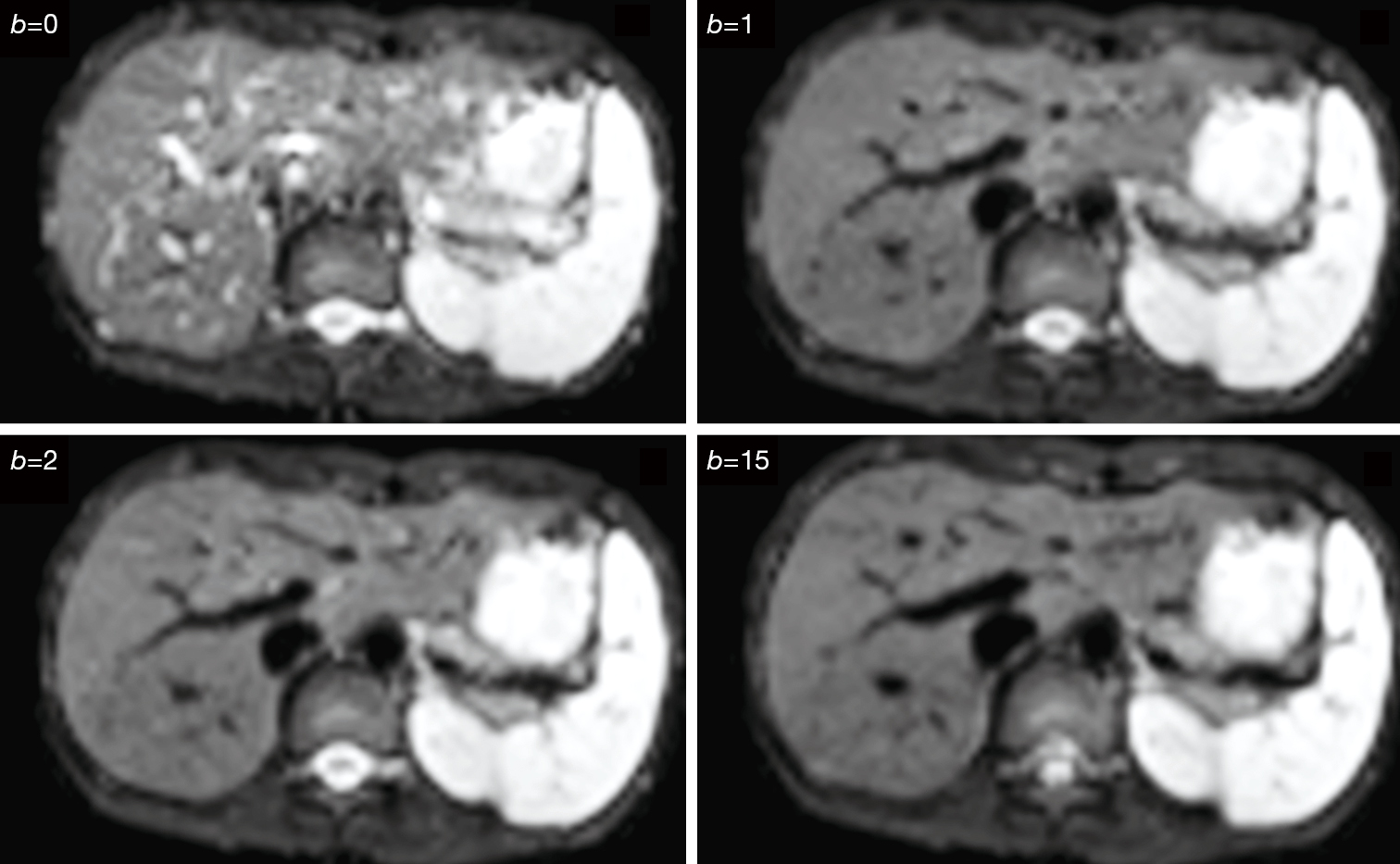 Figure 1 1.5 T liver IVIM diffusion images with b-value =0, 1, 2, 15 s/mm2. The signal difference between b=0 s/mm2 image and b=1 or 2 s/mm2 images is dramatic, particularly the vessels show high signal without diffusion gradient while showing dark signal when the diffusion gradient is on even at b=1 s/mm2. [Reproduced with permission from (11)]. IVIM, intravoxel incoherent motion. 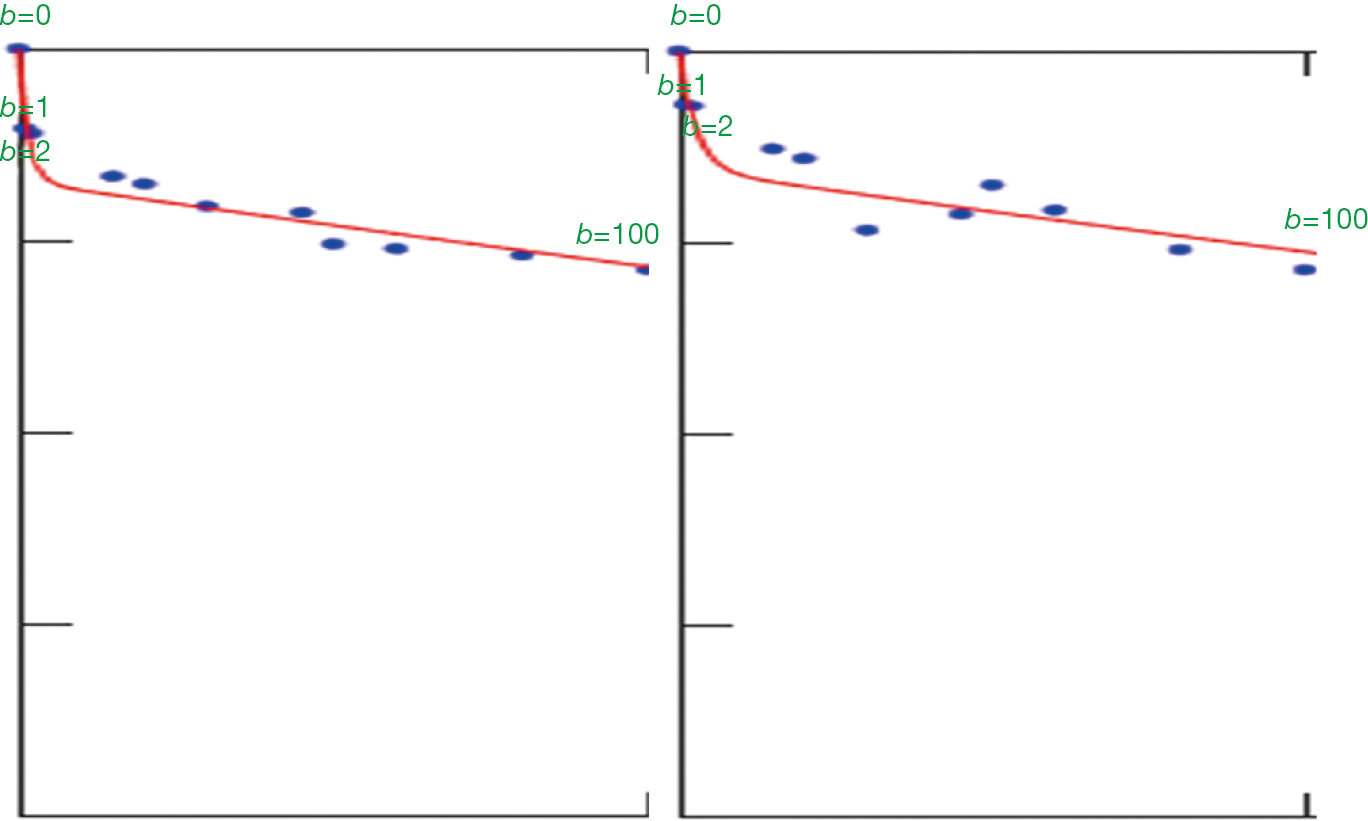 Figure 2 Two 1.5 T liver IVIM signal vs. b-value curves from b=0 to b=100 s/mm2. Note there is a sharp decrease of signal between b=0 vs. b=1, while the decrease of signal between b=1 vs. b=2 is much smaller. Thus the curves do not follow bi-exponential decay pattern. The ROI on liver parenchyma was drawn to avoid signal contamination from large vessels well; however, inevitably some very small vessels would have been included in the ROI. IVIM, intravoxel incoherent motion; ROI, region of interest.

Figure 3 Two 3T liver IVIM signal vs. b-value curves from b=0 to b=800 s/mm2. Note there is a sharp decrease of signal between b=0 vs. b=3, while the decrease of signal between b=3 vs. b=10 is much smaller. The signal decay curves between b=3 and b=800 are more likely to follow bi-exponential decay pattern. The ROI on liver parenchyma was drawn to avoid signal contamination from large vessels well; however, inevitably some very small vessels would have been included in the ROI. IVIM, intravoxel incoherent motion; ROI, region of interest. 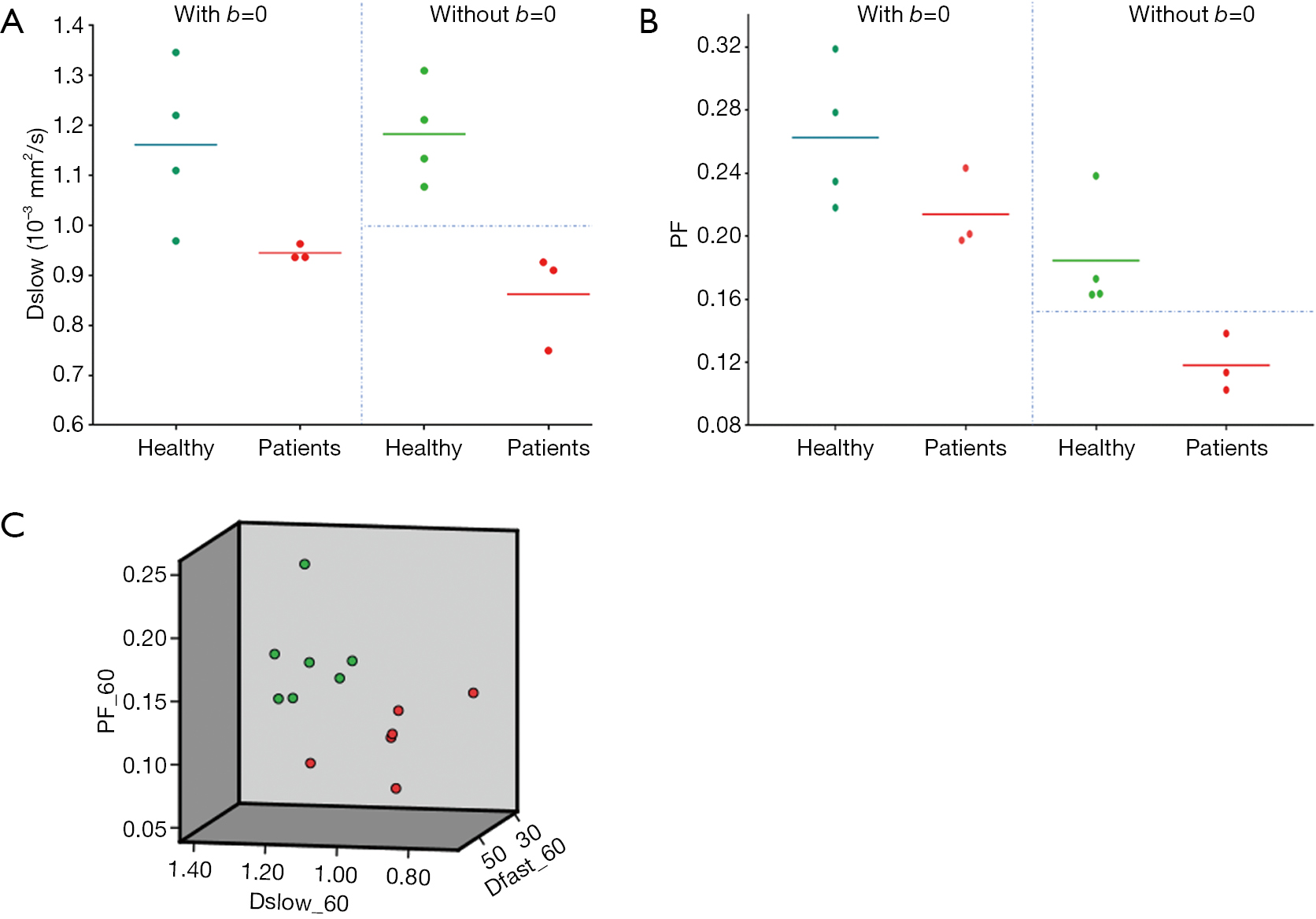 SI(0)ve can provide vasculature information of the living liver tissue. To precisely model the very fast initial signal decay, very dense sampling of very low b-value is required. In most of clinically practical cases, the sampling may be insufficient (i.e., not enough very low b-values). For practical approximation, this information weighted by area may be approximated by

Alternatively, relative SI(0)ve information can also be computed by

where SI(1) refers to the measured liver signal intensity when b=1 s/mm2. This SI (b=1) can also be replaced by SI (b=2) or SI (b=3). SI (b=2) or SI (b=3) may be preferable in cases when SI (b=1) may contain residual high blood signal. Understandably, multiple signal averaging (NEX >1) is strongly favored for data acquisition at b=0 s/mm2 and b=1 s/mm2 data to improve measurement consistency of SI(0)ve/area and SI(0)ve/rel.

Carefully select b value distribution and the threshold b-value

For liver IVIM analysis, to have sufficient and appropriate b-value distribution is important (5,15-17), and recently we used number of b-values of ~15. Generally, more b-values will improve fitting stability, so at this stage we would recommend acquiring as many b-values as practical. With current MRI technology, multiple slices covering the whole liver can be obtained with respiration-gating and 15 b-values in approximately 5 min.

For segmented fitting, selecting the right threshold b-value is more important than we initially thought (11,18). For detecting liver fibrosis, we have empirically demonstrated that threshold b=60 s/mm2 works better than threshold b=200 s/mm2 (9,11). It has been shown that PF offers best value in separating healthy liver vs. fibrotic livers, Dslow is generally not sensitive and Dfast tends to be unstable and difficult to be fitted precisely. For segmented fitting, choosing lower threshold b-value allows more data points to fit Dslow and therefore to fit PF and thus increases fitting reproducibility for PF (19). In addition, lower threshold b-value allows more perfusion component to be included in the Dslow calculation, and thus would increase the sensitivity of Dslow to liver pathologies.

Incorporating all IVIM parameters for differentiation

It has noted that while PF and Dfast are correlated, these two parameters are not directly in linear proportion to each other. The perfusion compartment (PF and Dfast) and diffusion compartment (Dslow) are not significantly correlated (11). For some cases, separation of healthy volunteers and fibrotic livers are only possible when all three parameters are taken into consideration (10). Though separation of healthy livers and fibrotic livers can also be achieved by statistical means such as classification and regression tree (CART) analysis (10), we expect the 3D visualization tool we used can be convenient in practice (Figure 5). If the data acquisition and post-processing method are standardized, then the normal liver’s data will occupy a space cluster, and if a new data entry falls out of this normal value cluster, pathology is suspected. Although we used a flat plane to separate patients and healthy volunteers (10,11), it should be noted that healthy livers and fibrotic livers do not have to be separated by a flat plane. 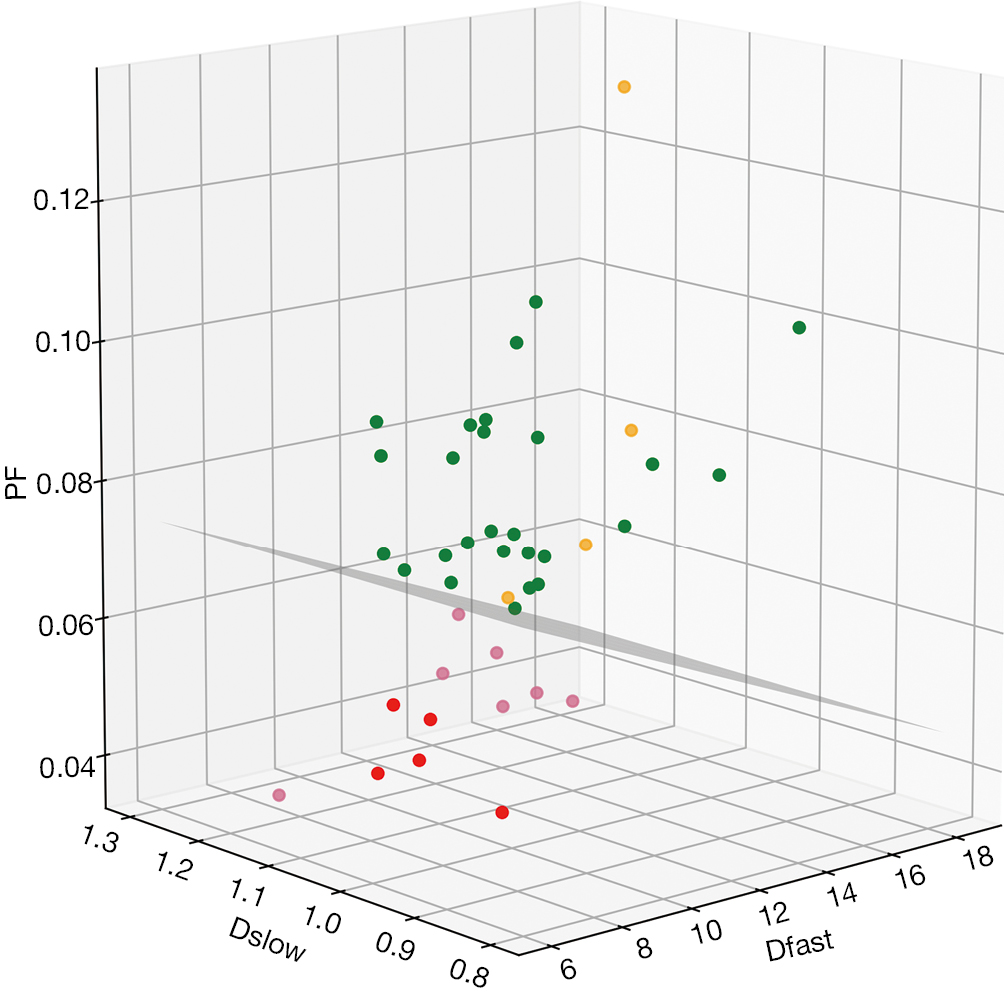 A number of measures should be considered to achieve good IVIM results. Subject (patient)’s cooperation for scanning is important to obtain high quality data for analysis. They should be well trained to maintain a shallow and regular breathing during MRI data acquisition. The balloon for respiratory-triggering should be placed on the upper abdomen where the respiratory motion is most visually evident. The more the radiographer gains experience in acquiring liver IVIM images, the more likely good quality images will be obtained. A trained radiographer may do an on-the-spot checking of image quality, and re-scan the patient if the initial IVIM image data is not of sufficient quality. As the respiratory liver displacement is more on the z-axis direction (head to foot direction) rather than in transverse plane (X-Y axis plane), some authors suggested that to scan the liver in the coronal plane may decrease the amount of motion artefact (20). Since respiration motion may be the most significant source of measurement imprecision, IVIM can also be acquired with a single-breathhold (Figure 6). This single-breathhold approach may have important potential, its validation in patients should be considered. As post-meal and fasted status may influence blood flow to the liver, it can be recommended that patients fast for 6 hours before liver IVIM imaging (21,22).

Drawing ROI should be careful so to avoid signal contamination from large vessels, liver border, and other artefacts. The consistency of ROI drawing also should be a research topic to be further addressed.

I thank our colleagues, collaborators, and research students who have worked, or are working with us for liver IVIM diffusion analysis. Particularly, I thank Dr. Jing Yuan, currently at Hong Kong Sanatorium & Hospital, who initiated our first liver IVIM study at the Third People’s Hospital of Shenzhen, China; Dr. Olivier Chevallier of Université de Bourgogne, Dijon, France, for experimenting with us on IVIM tri-exponential decay analysis and single breathhold IVIM data acquisition. I also thank Professor Peter C. M. Van Zijl of Johns Hopkins University, USA, for discussion of the appropriateness of not including b=0 image for IVIM analysis.