Type 1 diabetes (T1D) results from autoimmunity that triggers selective and progressive destruction of pancreatic beta cells. Islet transplantation (Tx) has emerged as the most promising therapy to restore normoglycemia in T1D patients (1). However, even with the success of the Edmonton protocol, the outcome of islet Tx remains suboptimal. According to the most recent report from the Collaborative Islet Transplant Registry, insulin independence 1 year after transplant is achieved in 50% of patients. Unfortunately, islet graft loss causes a decline of independence to below 30% at 5 years (2). Therefore, there is an urgent need for developing strategies and methods for monitoring transplanted islet grafts. Various imaging modalities have been suggested for islet visualization and monitoring after Tx. These include magnetic resonance imaging (MRI) of small paramagnetic iron oxide nanoparticles (SPION)-labeled islets (3-5), PET imaging of 18F-FDG-labeled islets (6,7) and GLP-1-targeted islets (8,9), SPECT imaging of 111In-labeled GLP-1R agonist (10,11), ultrasound imaging (12) and bioluminescence imaging (13). While significant efforts have been made to advance imaging of islet Tx into the clinic, limitations of each modality have so-far hindered wide clinical translation [reviewed in (14)].

Magnetic particle imaging (MPI) is an emerging tracer imaging modality that directly images the magnetization of iron oxide nanoparticles (15), and is specific, sensitive, linearly quantitative, and translatable. MPI has already been utilized for tumor imaging (16), lymph node staging (17), cell tracking (18-21), vascular imaging (22), pulmonary embolism detection using ventilation/perfusion (23), traumatic brain injury (24), and other indications. The technique visualizes the nanoparticle distribution in the sample, and the images can be acquired as both a two-dimensional (2D) projection image (akin to X-ray), as well as in a 3D tomographic image (akin to X-ray CT) (18,25-28). MPI’s specificity results from its high image contrast, since magnetic particles serve as the only source for signal and are thus the only visualized element (29). MPI’s sensitivity derives from the direct detection of the electronic magnetization of SPIONs, which is 108 times larger than the nuclear magnetization of protons seen in MRI (30). This translates to an MPI sensitivity in the hundreds of cells with current hardware and available magnetic nanoparticles (18). MPI’s linear quantitation arises from the linear signal change with nanoparticle concentration, which occurs independently of tissue depth, including in the lungs and bone (19). MPI is also safely translatable, as it uses biocompatible iron oxide nanoparticles (31), does not employ ionizing radiation and uses magnetic fields within limits for safe human use (32).

Isolated islets were labeled with dextran-coated Ferucarbotran SPIOs (VivoTrax, Magnetic Insight Inc., Alameda, CA, USA) at a concentration of 280 µg Fe/mL in CMRL 1066 media for 48 h and washed in PBS prior to Tx. Labeling efficiency was assessed by staining with anti-dextran antibody (Stemcell Technologies, Vancouver, BC, Canada) performed on paraffin-embedded islet sections (34).

We need to note that because islets for the calibration curve (islet phantoms) and for Tx came from different batches and were of different quality, we did not include specific estimates of total islet number in the post-mortem groups.

Data are presented as mean ± SD. Statistical comparisons between two groups were evaluated by Student t-test and corrected by one-way ANOVA for multiple comparisons using GraphPad Prism 5 (GraphPad Software, Inc., La Jolla, CA, USA). Correlation and linear regression analysis between measured iron content in the phantoms and the number of labeled islets was assessed using GraphPad Prism 5 as well. A value of P≤0.05 was considered to be statistically significant.

All animal experiments were performed in compliance with institutional guidelines and were approved by the Institutional Animal Care and Use Committee at the Massachusetts General Hospital.

Labeling of pancreatic islets with iron oxide nanoparticles resulted in 95% islet labeling, which was confirmed by staining with anti-dextran antibody (Figure 1A). Similar results were obtained in our previous experiments with other iron oxide preparations (3,37). Imaging of labeled islet phantoms revealed direct correlation between the iron content obtained from MPI image analysis and the number of agarose-embedded islets (R2=0.988, P<0.0001) (Figure 1B,C). 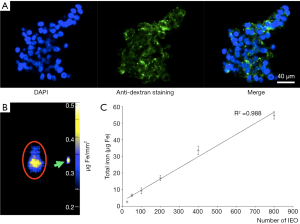 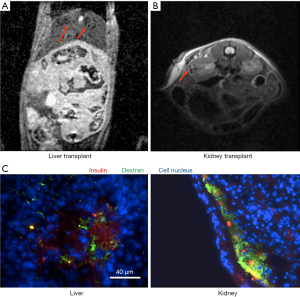 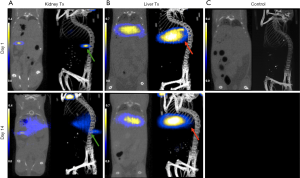 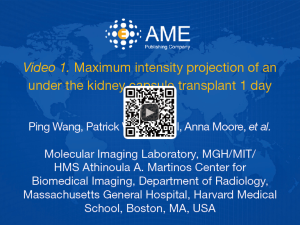 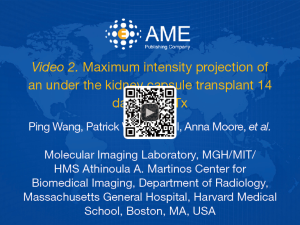 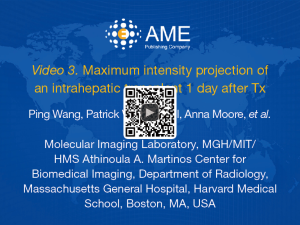 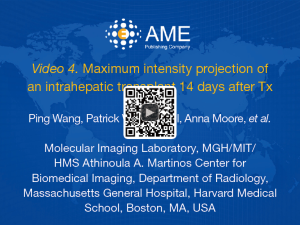 The sensitivity of MPI made some of the images unusable due to contamination from surgical instruments, animal feed, and feces, which are discussed below.

Islet Tx has a potential to restore normoglycemia in T1D patients, who otherwise rely on multiple daily injections of insulin. Clinically, transplanted islets, similar to their endogenous counterparts are significantly more suitable for the human body than exogenously supplied insulin because they have the ability to perfectly time internal insulin release, thus keep blood glucose in normal range.

With this study we set the goal to demonstrate quantitative MPI imaging of baboon islets and accurate localization of islets with a co-registered CT, as well as to describe possible challenges for future in vivo studies. In contrast to MRI, MPI enables quantification of islet number (18). In Figure 1, we demonstrate the linearity of MPI signal by measuring six different IEQ phantoms. The quantification shows the MPI signal increases linearly with the number of labeled IEQs (R2=0.988). In vivo, the quantitation could be used to monitor the change in MPI signal over time as a marker of graft deterioration. In this study we used 800 IEQ per transplant to establish the feasibility of detection in vivo. In the future studies we will use smaller number of islets based on the fact that 100–300 islets were easily detectable in the phantom study. However, there are several considerations that have to be taken into account. In the case of MRI, which has low sensitivity, iron is only detected in its compartmentalized form in islet cells/islet clusters. Following islet death, the iron oxide tracer is released in the interstitium where its local concentration is too low to be detected by MRI. The released nanoparticles are then taken up and broken down by Kupffer cells in the liver over the course of several weeks (38). In the case of MPI with much higher sensitivity, if the released iron nanoparticles have not been cleared, they are detected even if outside of the islet cells. Because of the short timeline of our experiment, signal decreases were not obvious between days 1 and 14 following liver Tx. In the future, it would be beneficial to use iron oxide nanoparticles with fast clearance. In spite of these issues, unlike MRI, MPI allows for the detection of the signal coming specifically from the islets immediately after Tx as magnetic nanoparticles serve as the only source for that signal. The specificity of MPI is also demonstrated in Figure 3, where in the case of the kidney transplant it was possible to distinguish between the signals from the kidney and from the liver where the released nanoparticles accumulated. This means that if the animal is monitored over time, MPI could provide information on iron metabolism and biodistribution after release from the islets.

As seen above, the sensitivity of MPI for detecting small quantities of iron presented us with new challenges. A number of animals produced unusable images due to the use of metal surgical instruments, contaminated feed, a feces signal, and contaminated paper products. We noticed that some initial specimens produced signal at surgical sites (Figure S5) that we attributed to the microscopic shavings shed from metal instruments used in Tx, which we remedied in later animals. We also noted that some animals produced significant signal in their gut attributed to a significant amount of iron in mouse chow. Later animals were fed a laxative, which demonstrably eliminated the feces signal. Last, during imaging, we observed background signal from the use of recycled paper products used to position the animals, which we rectified in later images.

Beyond islet tracking, MPI is more widely applicable to research developing treatments for diabetes such as novel stem cell replacement therapies (43,44), and understanding islet rejection. For example, studies that have recently advanced to phase I trials (43,44) successfully demonstrate application of human embryonic stem cell (hESC)-derived pancreatic progenitors for restoring normoglycemia. Protocols describing generation of insulin-producing beta-cells by differentiation of human pluripotent stem cells (hPSCs) along the pancreatic lineage have also been developed and are now widely available for diabetes researches (45). Regardless of the source of beta-cells used for Tx there remains a need to detect and monitor these transplants over time in experimental animals and in humans. MPI could also be used for development and testing of drugs for islet protection. As magnetic nanoparticles can be synthesized to carry a payload, islets could also be treated and labeled at the same time prior to Tx. In our previous studies we have already shown protective effect of theranostic magnetic nanoparticles carrying siRNA directed towards genes responsible for islet damage (34,46). We believe that MPI could assist researcher and clinicians in detecting grafts from various sources and monitoring them over time. Finally, as islet Tx surgeons try to find sites more suitable for islet survival (47,48), the approach described above could assist in establishing those new sites.

Here we have shown that MPI has great promise for visualizing, quantifying, and monitoring islet Tx. The lessons learned in these post mortem animals are now being applied as we work to translate these initial results into in vivo islet tracking studies. We believe that MPI could play an important role in monitoring the grafts, both by directly imaging of the graft itself, as well as through indirect measurements of signal in RES organs such as the liver.

Ethical Statement: All animal experiments were performed in compliance with institutional guidelines and were approved by the Institutional Animal Care and Use Committee at the Massachusetts General Hospital (No. 2005N000066).