Human immunodeficiency virus (HIV) infection and antiretroviral therapy (ART) are established independent risk factors for osteoporosis and elevated prevalence of fracture (1-3) as well as avascular necrosis (AVN) (4,5). Areal bone mineral density (aBMD) derived from dual X-ray absorptiometry (DXA) is the standard clinical parameter for the diagnosis of osteoporosis and assessment of risk of osteoporotic bone fracture (6,7). However, data from 138 HIV-infected women and 402 controls showed an increased incidence of fragility fractures in HIV-infected women despite similar aBMD (8). Another study demonstrated that only four of 11 HIV infected women with fractures were diagnosed as osteoporotic by DXA (9). Thus, increased risk of fracture is not solely explained by aBMD. In addition, bone microstructure might play an important role in the context of bone strength in this population. There is increasing evidence that HIV infection and its treatment are associated with bone quality changes that do not impact BMD but do increase fracture risk.

Data supporting this theory have been reported for the extremities (10,11), however, no study has determined whether central skeletal sites are affected similarly. The proximal femur is an important anatomical site for fracture, and femur fractures are usually accompanied with high morbidity and mortality (12). As HIV-infected individuals live longer through effective ART, HIV-related bone deterioration is superimposed upon age-related bone deterioration and is expected to result in greater rates of fragility fractures than in the general population in the near future (13,14). In addition to the effect of HIV infection, it has been shown that ART exacerbates bone loss (15,16).

In-vivo imaging of the trabecular bone microstructure at the proximal femur with high-resolution magnetic resonance imaging (MRI) is quite challenging due to signal-to-noise constraints and has been accomplished only recently with advanced MR pulse sequences and improved hardware (17). Further progress in the field has now enabled very high spatial resolution in the proximal femur (18,19), which was previously only achieved in the extremities (20-23). In addition, novel coil correction methods (24) and image analysis approaches (25-28) complement the in-vivo assessment of structural bone integrity in the proximal femur. Lastly, the development of advanced image registration techniques allow the comparison of structural bone parameters across a set of MR images at corresponding anatomic locations, e.g., the femoral head, greater trochanter, femoral neck, as well as the total femur (29,30).

The purpose of this study was twofold. First, to apply recently developed MRI methods and post-processing techniques to quantify the trabecular bone microstructure in the proximal femur in anatomically corresponding volumes of interest across HIV-infected subjects and uninfected controls; second, to compare the MRI results with microstructural assessments of the distal radius and distal tibia using HR-pQCT as well as with aBMD from DXA measurements.

In our main study, 8 HIV-infected men and 11 uninfected control men were included. Informed consent was obtained before scans. HIV-infected participants were recruited from the UCSF Department of Infectious Diseases and the UCSF 360: Positive Care Center. Patients were diagnosed with HIV an average of 10 years prior to enrollment and were on stable long-term ART. Exclusion factors included use of bisphosphonates, thyroid hormone replacement, steroids and illicit drug use. Controls were recruited from the general population and were age-matched to the HIV-infected subjects. All HIV-infected individuals completed the Community Healthy Activities Model Program for Seniors (CHAMPS) Physical Activity Questionnaire for Older Adults. The questionnaire used revised Metabolic Weight Values (MET) to adjust for the older population (31). MET-hours per week (including light, moderate, and vigorous activity levels) were calculated for each HIV-infected individual. In an ancillary study, 20 HIV-infected men and 18 age- and BMI-matched uninfected control men were recruited through the same mechanisms described above and informed consent was obtained. These participants were scanned with HR-pQCT but not MRI or DXA. The purpose of this ancillary study was to obtain more closely BMI-matched groups to investigate whether BMI alone could be driving differences in bone quality between HIV-infected and control individuals.

Automatic coil correction by nonparametric nonuniform intensity normalization (N3) (24) was applied to all MR scans. The proximal femur was then semi-automatically delineated and the segmentations were used to prescribe three different volumes of interest based on image registration to a common template (30) as depicted in Figure 1. The volumes of interest were: femoral head, femoral neck, and trochanter. At each region, local bone enhancement fuzzy clustering (26) was applied to segment the trabecular bone and assess the following four bone parameters: fuzzy bone volume fraction (f-BVF), trabecular number (Tb.N), trabecular spacing (Tb.Sp) and trabecular thickness (Tb.Th), as previously described by Majumdar et al. (21). 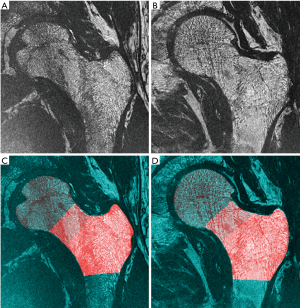 Figure 1 Representative coronal cross-sections of high-resolution magnetic resonance images of the proximal femur of a healthy control (A) and an HIV-infected patient (B) with their corresponding femoral regions highlighted with different shades of red in (C) and (D), respectively: femoral head (dark red), femoral neck (red), and trochanter (bright red).

DXA scans of the lumbar spine (L1 to L3) and the proximal femur (total femur and femoral neck) were obtained using two different scanners (Prodigy, GE/Lunar and Discovery, Hologic), and aBMD was calculated. Online available conversion tables from the manufacturers were used to convert aBMD values between the different scanners.

Differences between bone parameters of HIV-infected men and healthy controls were assessed for each imaging modality with two-tailed unpaired Student’s t-tests as well as with general linear models. The required significance level was set to P<0.05.

Figure 2 Representative coronal cross-sections of high-resolution magnetic resonance images of the proximal femur of a healthy control (A) and an HIV-infected patient (B) with segmented and thresholded images depicted for each region of interest (head, neck, and trochanter). The HIV-infected patient has relatively lower bone volume fraction, fewer and thicker trabeculae, with greater separation between trabeculae. HIV, human immunodeficiency virus.

Densitometric results from DXA showed no significant differences between groups for all measurements (lumbar spine and the proximal femur).

To the best of our knowledge, only two published studies have investigated bone quality in older HIV-infected individuals (10,11). However, these studies investigated bone quality only at the extremities using HR-pQCT and reported conflicting results. Biver et al. (10) found trabecular bone microstructure alterations with lower Tb.N and higher Tb.Sp at the distal radius, as well as lower DXA aBMD at the total femur and ultra-distal radius, in HIV-infected men (median age =64 years) compared to healthy age-, BMI-, and gender-matched controls. In contrast, Yin et al. (11) did not find significant differences in structural HR-pQCT parameters of trabecular bone at the distal radius and distal tibia between HIV-infected women (mean age =58 years) and uninfected controls, but found lower DXA aBMD at the spine, total hip and ultradistal radius in HIV-infected women.

A limitation of our study is the sample size. With the limited sample size we may not be powered to detect aBMD differences between HIV-infected subjects and healthy controls as reported in previous studies in the literature. Importantly, our data show that even with the small sample size, we were able to detect differences in trabecular microstructure using high resolution imaging techniques. Furthermore, the trabecular bone impairment which was most significant in the femoral head might be attributable to AVN which is prevalent in HIV infected subjects (4,5). However, we do not have conclusive evidence of AVN in these subjects.

In conclusion, we have identified impaired trabecular bone microstructure in HIV-infected men compared to uninfected controls, while DXA detected no significant differences between groups. We also found that these differences were more pronounced in the femoral head. This initial study highlights the relevance of MRI and HR-pQCT as powerful and necessary imaging tools in the assessment of bone health in this population. Larger-cohort studies incorporating these advanced imaging tools are needed.

Ethnical Statement: The study was conducted in accordance with the Committee for Human Research at our institution and followed all regulations. Informed consent was obtained before scans.