﻿ Rosette-forming glioneuronal tumor in the pineal gland and the third ventricle: a case with radiological and clinical implications

A 39-year-old man presented with a more than 20 years history of episodic headache and vertigo, and impaired vision and memory disorders of 1-year duration. Computed tomography (CT) scan of the brain showed ventriculomegaly due to a well-defined hypodense lesion in the pineal gland and the lesion showed faint heterogeneous contrast enhancement (Figure 1A). No calcification was noted. Magnetic resonance imaging (MRI) confirmed a well-defined 3.2 cm × 2.2 cm × 3.0 cm solid-cystic mass in the pineal gland. It was iso-hypointense on T1 weighted and iso-hyperintense on T2 weighted sequences. Contrast enhancement showed mild dotted enhancement inside the mass (Figure 1B). Coronal image showed the mass involving the tectum (Figure 1C). Sagittal image of the lesion showed ring-shaped enhancement and the lesion involving the posterior third ventricle and extending to the coping of the fourth ventricle, but without ventriculomegaly of the fourth ventricle (Figure 1D). Hydrocephalus was observed. No satellite lesion was noted. There were no abnormal findings in other regions including the fourth ventricle. 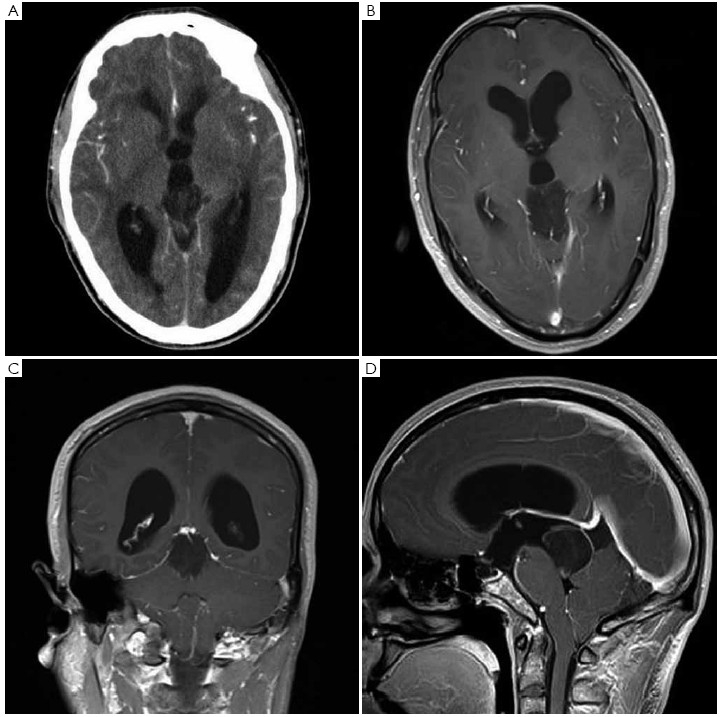 Figure 1 A. CT shows ventriculomegaly due to a well-defined hypodense lesion in the pineal gland and the lesion showed faint heterogeneous contrast enhancem ent. No calcification was noted; B. MRI confirms a well-defined 3.2 cm × 2.2 cm× 3.0 cm solid-cystic mass in the pineal gland. Contrast enhancement shows mild dotted enhancement inside the mass; C. Coronal MR image shows the mass involved the tectum; D. Sagittal MR image of the lesion shows ring-shaped enhancement and the lesion involved the posterior third ventricle and extended to the coping of the fourth ventricle, but without ventriculomegaly of the fourth ventricle

An external ventricular drain was inserted and the patient clinically improved. The patient underwent a stereotactically guided suboccipital transtentorial craniotomy. At surgery, it was observed that the solitary tumor arise from the pineal region with extension into the aqueduct. Most of the lesion was soft, with a pinkish-grey color, and fresh, with clear boundaries. In the post-operative course, the patient developed VI left cranial nerves palsy and dysmetria. No recurrence of the tumor has been observed on radiologic images during 42-months’ follow-up.

Histopathology exhibited both a neurocytic and an astrocytic component. In some areas neurocytic rosettes were observed (Figure 2A). The nuclei of the tumor were small and round, and no atypia or mitosis was detected. At the center of the neurocytic rosettes was an eosinophilic core, an absence of vessels, positive staining with synaptophysin (Figure 2B). Immunohistochemical findings showed: glial fibrillary acidic protein (GFAP) (+), neurofilament (NF) (+),Neuronal nuclei (NeuN) (+),neuron-specific enolase (NSE) (+), Syn (foci+), VIM(+), Olig-2 (+), Ki-67 (<1%, local 10%). The final histopathological diagnosis was RGNT in pineal gland, involving the tectum and the third ventricle (WHO grade I).

RGNT was first described by Komori in 1998 (6). A total of approximately 46 patients have been reported prior to our patient (6,7). Patients commonly present with headaches and ataxia (3,7-9). In general, the major primary symptoms include a headache with high intracranial pressure because of an increase of volume, ataxia, dysarthria, and vertigo (2,5,7,9). As to our case, the patient has a history of headache more than 20 years. The long antecedent clinical history is consistent with the known indolent behavior of this low-grade, WHO grade I, neoplasm. There is a wide spectrum of presenting symptoms of RGNT. The clinical features of our patient are similar to those previously described. However, the patient also has symptoms of impaired vision and memory disorders maybe due to the tumor arises in the sensitive region, The pineal gland, also known as the ‘third eye’, is linked with certain disorders in the human body, and the symptoms of tumors developed in the region of the gland include headache, seizures, nausea and vomiting, changes in visual perception and memory disorders. This possible complication of an RGNT is reported here for the ﬁrst time.

According to the literature, these tumors have been described to be soft, gelatinous, and generally well demarcated, and sometimes minor to moderate infiltration has been observed (8-11). In the present case, most of the lesion regions had these characteristics. The lesion was totally resected, but the VI left cranial nerves palsy after surgery suggests careful section must be performed, avoiding permanent neural injury.

Generally, a typical RGNT appearance on MRI scan has been described as T1 iso-/hypointensity and T2 hyperintensity, and some enhancement is observed (3,8,12,13). In addition, calcification can be seen on CT (9,12,13). Obviously, the radiographic feature in this pineal gland example is similar to those in the typical fourth ventricular location. However, this tumor largely involves the pineal region, the posterior third ventricle and the cerebral aqueduct, which causing hydrocephalus. In our opinion, other lesions in the pineal gland should be included in the radiological differential diagnosis, such as cystic hemangioblastoma, pilocytic astrocytoma, germinoma, pinealocytoma, ependymoma, choroidal papilloma.

WHO 2007 states that the tumor contains both a neurocytic and an astrocytic component (8). The histologic features in this case were identical to those described for RGNT of the fourth ventricle, including the dual neurocytic component and pilocytic component, the immunostaining for synaptophysin in the core of rosettes. Our case satisfies those criteria. Based on the literature, tumor cell proliferation indices as assessed by MIB-1 labeling of Ki-67 antigen are low, the MIB-1 staining of the Ki67 antigen is 0.35-3.07, and the mean value is 1.58% (4,9) . In our case, Ki-67 <1% in most portion of the lesion, but local lesion reach 10%. No recurrence of the tumor has been observed on radiologic images during 42-months follow-up. Routine follow-up examination of cranial MRI will be recommended in order to estimate the long-term prognosis. On cytology the main differential diagnosis are pilocytic astrocytoma, DNT, oligodendroglioma, neurocytoma, and pineocytoma, which display histopathological features similar to RGNT.

Komori et al. (6) analyzed 11 cases that had distinct clinicopathologic features and proposed RGNT of the fourth ventricle to be an independent type of tumor. In our case, the lesion primarily situated in the tectal/pineal and acqueductal regions, and a few more cases suggested that an RGNT may not be limited in distribution in the fourth ventricle (14-18). Recently seven cases of RGNTs remote from the fourth ventricle have been described: one in the optic chiasm, one in the third ventricle, one in the spinal cord and four in the pineal gland (14-18). Our patient is the fifth case with RGNT arising in the pineal region. Nevertheless, as for whether the pineal region is another predilection site of RGNT, further studies are needed to clarify the histogenesis of RGNT.

There have been 36 reported patients with RGNT. We present the fifth patient with a RGNT in pineal gland and the eighth reported patient with RGNT outside the fourth ventricle. The clinical data are consistent with the histological low grade character, obviating the need for routine postoperative adjunctive treatment. Long-term follow-up is essential to confirm the presumed indolent course.