Androgen receptor increases and negative expression of GCDFP-15 in primary ductal adenocarcinoma of the lacrimal gland: a case description

Primary ductal adenocarcinoma (PDA) of the lacrimal gland is a rare and aggressive tumor, with a 44% 5-year disease-specific survival rate (1,2). The present study describes the malignant infiltrating PDA case of a patient with a good prognosis. After a precise diagnosis was made using quantitative imaging and immunohistochemistry and followed by radical tumor resection and 1 month of postoperative radiotherapy, the patient was discharged in good health.

All procedures performed in this study were in accordance with the ethical standards of the institutional and national research committee(s) and with the Helsinki Declaration (as revised in 2013). Written informed consent was obtained from the patient for publication of this case report and accompanying images. A copy of the written consent is available for review by the editorial office of this journal. The patient was a 70-year-old Chinese man with no previous medical history of breast or salivary gland tumors. He complained of significantly decreased vision with an occasionally diplopia of the left eye and progressive painless swelling in his left upper eyelid, temple, and orbit lasting for about 1 month. Ophthalmological physical examination at the First Affiliated Hospital of Xi’an Jiaotong University, Shanxi Province, China, on November 15, 2016, revealed more significantly impaired vision in the left eye compared with the right eye. A physical examination showed normal vision in the right eye and a mild proptosis of the left eye with an irregular mass in the orbit, which was more prominent in the superior orbit. There was no pulsation or thrill of the firm mass in the left eye on palpation. 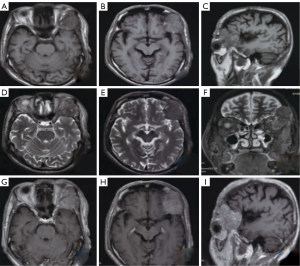 The patient was discharged after 1 month of postoperative radiotherapy. A telephone follow-up was performed 5 years later. As of this writing, the patient is alive without any complaints of complications or symptoms related to possible recurrence at the primary site or metastasis to the brain, lungs, or digestive system. He declined attending the hospital for any further diagnoses and treatments.

PDA of the lacrimal gland is a very rare, highly aggressive malignant epithelial tumor, accounting for 2% of all epithelial lacrimal gland tumors (3). It often carries a poor prognosis (4) and predominantly affects middle-aged and older adult men (1).

The tumor usually begins in the upper eyelid and is accompanied by clinical symptoms of lid pseudoptosis, exophthalmos, dystopia, pain, and reduced visual acuity (5). Due to an insidiously painless swelling of the orbits for months, most patients are diagnosed at an advanced stage. Our patient was diagnosed and treated after experiencing painless swelling in his left upper eyelid, temple, and orbit lasting for about 1 month, with the imaging findings showing malignant signs, including an irregularly shaped mass, bone erosion, and heavy calcification. Some researchers have suggested that calcification within a lesion in the lacrimal gland should be considered an uncharacteristic imaging feature of ductal adenocarcinoma of the lacrimal gland (6); however, this needs to be confirmed by more studies. A number of differential diagnoses were suggested based on imaging results, including adenoid cystic carcinoma (AdCC), plasmacytoma, and metastatic tumor. The most common primary tumors are lung and breast cancers, which may lead to secondary metastases to the bone marrow cavity of the orbital wall via the bloodstream and may then progress further to destroy the bone cortex, forming irregular soft tissue masses in the subperiosteal space. In the case reported here, there were no primary tumors in the lung and breast, and only some spotted, ill-circumscribed nodular calcifications on CT imaging of the soft tissue; meanwhile, there was a large heterogeneously isointense mass on T1W MRI, a hypointense mass on T2W MRI, and obvious heterogeneous enhancement on CE-T1W MRI. The images showed no obvious enlargement of the cervical lymph nodes.

Histopathological and immunohistochemical analyses play a prominent part in diagnosing ductal adenocarcinoma of the lacrimal gland. A previous study reported a case in which local bone destruction of the medial wall of the left orbit on CT imaging was not caused by invasion of the tumor but possibly by compression from the tumor since both histopathological and immunohistochemical tests of the tissue near the local destruction of the orbital wall were negative (6). PDA of the lacrimal gland shares some histological and immunohistochemical similarities with salivary duct carcinoma, and they are often classified according to the histological classification of salivary gland tumors (4,5). Therefore, researchers tend to borrow concepts relating to the well-studied and the histopathologically similar invasive ductal carcinoma or salivary duct carcinoma. Researchers found that GCDFP-15, AR, and human epidermal growth factor receptor 2 (HER2) could be biomarkers of PDA of the lacrimal gland in confirming diagnosis and further predicting prognosis (1,6). A poor prognosis has been demonstrated to be associated with overexpression of HER2 (1). In a study of breast cancer subtypes, GCDFP-15 was thought to be a favorable prognostic factor and was not independent from other factors such as AR and HER2 (7). One study even demonstrated that the mammalian/mechanistic target of rapamycin (mTOR) pathway proteins were activated in ductal adenocarcinoma of the lacrimal sac and speculated that mTOR inhibitor may be a potential candidate for treatment of PDA of the lacrimal gland (8). mTOR is a serine/threonine kinase, which regulates cell growth and metabolism and is regarded as one of the most promising therapeutic targets in different types of carcinomas. It has been shown that mTOR inhibitors can prolong survival in some types of carcinomas (9). However, in one reported case, a 46-year-old female patient with overexpression of HER-2 showed no evidence of metastasis after 5.5 years (1). Unfortunately, there was no evidence of GCDFP-15 or mTOR in this female patient. Researchers did not know why the tumor of this female patient was different from those found in the other cases of lacrimal duct carcinoma (1). Examination of the histology of the specimen from this female patient showed a circumscribed lacrimal duct carcinoma with a thick hyalinized band of fibrous capsule (1). A circumscribed lacrimal duct carcinoma is supposed to be a variant of lacrimal duct carcinoma (1). In our case, the infiltrating and poorly differentiated ductal adenocarcinoma of the lacrimal gland showed comedo necrosis when the histology of the specimen was examined. In our patient, the immunohistochemical analysis showed that the tumor cells were positive for AR (+) and CK (+) and negative for GCDFP-15 (–), ER (–), PR (–), S100 (–), PAP (–), and CD117 (–). Due to limited laboratory resources, we did not study HER-2 or mTOR. Our patient achieved an optimal subjective long-term response with disease control and symptom resolution; however, his vision did not recover. Another case report described a 79-year-old Japanese female who had a primary ductal adenocarcinoma of the lacrimal sac with cervical lymph node metastases with GCDFP-15 (+), AR (+), CK (+), mTOR (+), and HER-2 (–). She had been experiencing persistent swelling in her left lower eyelid for approximately 8 months. We conclude that, when conducting physical examinations and imaging, an earlier awareness or recognition of this malignant tumor is essential to achieving optimal diagnosis, prognosis, and future treatment.

A study on a cohort from the orbital database at Moorfields Eye Hospital in which 19% of cases had primary adenocarcinoma showed that cranio-orbital resection did not appear to improve the survival of patients with lacrimal gland carcinoma (10). Unfortunately, no data were reported on the level of ARs and expression of GCDFP-15 in the 19% of patients with primary adenocarcinoma from this orbital database. In the case reported here, even in the absence of palpable lymphadenopathy, a comprehensive therapy of complete excision of the involved lateral rectus and cranial tissue with lymph node dissection as well as postoperative adjuvant high-dose radiotherapy was performed immediately to achieve early locoregional control, which can prevent the recurrence or progression of the condition. Future studies are needed to confirm this therapeutic option for patients with primary ductal adenocarcinoma of the lacrimal gland who have elevated AR expression and negative expression of GCDFP-15.

In conclusion, we present a very rare case of PDA of the lacrimal gland with imaging, histopathology, and immunohistochemistry data and share our experience in diagnosis and treatment. It is very important to recognize PDA of the lacrimal gland as a distinct entity, as this can aid in defining its management and formulating a prognosis, which is especially helpful in overcoming the difficulties that may be encountered in the diagnosis of such unusual tumors. In addition, further studies will be needed to clarify the relationship between patient prognosis and immunohistochemistry of AR (+), CK (+), GCDFP-15, HER2, and mTOR.

Conflicts of Interest: All authors have completed the ICMJE uniform disclosure form (available at https://qims.amegroups.com/article/view/10.21037/qims-22-312/coif). The authors have no conflicts of interest to declare.

Ethical Statement: The authors are accountable for all aspects of the work in ensuring that questions related to the accuracy or integrity of any part of the work are appropriately investigated and resolved. All procedures performed in this study were in accordance with the ethical standards of the institutional research committees and with the Helsinki Declaration (as revised in 2013). Written informed consent was obtained from the patient for publication of this case report and accompanying images. A copy of the written consent is available for review by the editorial office of this journal.