With larger blood volume flowing into a cardiac chamber, by stretching muscle fibers, increased contraction force could be detected (1). This phenomenon is called the Frank-Starling mechanism, allowing the output of a cardiac chamber to be synchronized without external regulation (1). This sort of relationship could be demonstrated not only for the left ventricle (LV) (2), but for the left atrium (LA), as well (3,4). In recent studies, increased LA contractility facilitated by increased LA preload could be seen, however, only up to a point, beyond which LA contractility did not increase further (3,4). Similar detailed analysis for the right atrium (RA), however, was not performed. Novel cardiovascular imaging methods including three-dimensional speckle-tracking echocardiography (3DSTE) allows detailed analysis of such relationships in a non-invasive way even in healthy subjects (5-7). The present study aimed to investigate the Frank-Starling mechanism in the RA represented by its volumes, volume-based functional properties and strains respecting the cardiac cycle in healthy adults by 3DSTE.

The present single center retrospective cohort study consisted of 179 healthy adults (mean age: 33.2±12.0 years, 92 males), in case of whom laboratory, electrocardiographic and echocardiographic findings were normal. They had no symptoms, drug use, known disorders or any pathological signs, which could theoretically affect the results. None of the healthy subjects were athletes or had performed significant or prolonged exercise 1 week before 3DSTE examinations. All subjects had undergone complete two-dimensional (2D) Doppler echocardiographic examination extended with 3DSTE-derived echocardiographic data acquisition. 3DSTE-derived data analysis was performed at a later date offline (8-10). 3DSTE data acquisitions and analyses were performed in the 3D echocardiographic laboratory at the University of Szeged with 12-year experience with 3D echocardiography. All data were analysed by two experienced physicians (AN, ÁK). The present study is a part of the Motion Analysis of the heart and Great vessels bY three-dimensionAl speckle-tRacking echocardiography in Healthy subjects (MAGYAR-Healthy) Study, which was organized for physiologic studies among others following acquisition of 3D echocardiographic datasets of hundreds of healthy adults (‘Magyar’ means ‘Hungarian’ in Hungarian language) (3,5,8,9). The study was conducted in accordance with the Declaration of Helsinki (as revised in 2013). The study was approved by the Institutional and Regional Human Biomedical Research Committee of University of Szeged (Hungary) (No. 71/2011 and updated versions) and informed consent was taken from all the subjects.

For 3DSTE studies, the same Toshiba ArtidaTM echocardiographic machine (Toshiba Medical Systems, Tokyo, Japan) was used with a PST-25SX phased-array matrix transducer with 3D capability (8-10). Firstly, 3D echocardiographic dataset was digitally acquired with 26.8±1.1 vps from the apical window, offline analysis was performed at a later date. Six RA-focused sub-volumes were acquired within 6 cardiac cycles, during a single breath-hold, from which a pyramid-shape 3D full volume was automatically created. RA was examined with the help of auxiliary apical 4-chamber (AP4CH) and 2-chamber (AP2CH) longitudinal views and short-axis views focused on the basal, mid-atrial, and superior RA regions (Figure 1) with the help of 3D Wall Motion Tracking software version 2.7 (Toshiba Medical Systems, Tokyo, Japan). In longitudinal views, reference points at the lateral edge of RA-tricuspid annulus (TA) moving towards the septal edge of the RA-TA were traced. RA appendage, superior and inferior venae cava and coronary sinus were excluded from the measurements. 3D wall motion tracking helped creation of the virtual 3D RA model (8-10). 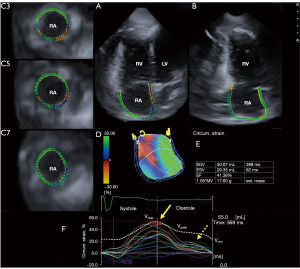 The following RA volumes were determined (8,10):

The following RA strains were determined at RA reservoir function in end-systole (peak strain) and at atrial contraction in end-diastole (at RA systole) (9,10):

Continuous data were presented as mean ± SD, while categorical data were shown as frequencies and percentage, where appropriate. P value less than 0.05 was considered significant. Normality of distribution was evaluated by Shapiro-Wilks test, followed by Levene’s test to assess variance of homogeneity. Analysis of variance (ANOVA) was used for normally distributed datasets and Mann-Whitney Wilcoxon test was used in other cases. For categorical variables Fisher’s exact test was used. Linear regression plots showing associations between Vmax and peak RA strains have been created. Statistical analysis was done by Medcalc software (Mariakerke, Belgium).

Subjects were integrated into 3 groups according to the mean value of Vmax ± SD: Vmax <30 mL, 30 mL ≤ Vmax ≤60 mL and >60 mL. No differences between demographic parameters could be detected between the groups examined. All RA volumes respecting the cardiac cycle of all cases and calculated separately for females and males and their indexed equivalents increased with Vmax (Table 1). RA stroke volumes increased with Vmax regardless of the phase it was measured in. While TAEF representing the reservoir phase remained unchanged with the increase of Vmax, a significant increase in PAEF representing the conduit phase could be detected, in case of Vmax >60 mL. AAEF representing the booster pump function did not change with the increase of Vmax (Table 2).

The RA is located on the right side of the heart and has a unique structure and morphology with an appendage (12). Its wall is thin, the posterior wall of the RA is smooth, while the anterior part is formed by the pectinate muscles. Superior and inferior caval veins, sinus coronarius and smaller veins enter into the RA, while blood passes to the RV through the tricuspid valve. The RA has a special role in the pacemaker function (sinus node) and conduction as well (12,13). Due to its complex structure and function, there is a limited opportunity for its non-invasive clinical evaluation. 3DSTE seems to be capable of detailed assessment of volumetric and contractile RA features at the same time (13).

In a recent study, similar LA analysis was performed in healthy subjects by 3DSTE (3). Compared to these findings, RA functional properties showed different patterns with increasing RA volumes as compared to findings with LA (3). While atrial volumes and stroke volumes showed similar increase with increasing atrial volumes, emptying fractions in reservoir and booster pump functions remained unchanged for both atria. However, emptying fraction for conduit function (PAEF) was significantly enhanced for RA and deteriorated for LA. When peak strains representing the systolic reservoir phase were assessed, LA-RS and LA-3DS were larger in healthy cases with larger LA volumes, but only up to a point, similar significant findings could not be detected with RA. RA-RS and RA-3DS showed non-significant increase with increasing RA volumes in healthy subjects. While CS and LS of both atria did not show relationship with increasing volumes, RA-AS was the highest when Vmax was the highest. When atrial strains at atrial contraction were examined, LA-RS and LA-3DS behaved similarly to peak strains. Similar, but non-significant pattern could be detected for RA. While CS, LS and AS of LA did not change with increasing LA volumes, an obvious significant reduction with increasing volumes could be demonstrated for RA suggesting different behaviour of LA and RA with increasing atrial volumes.

The most important clinical implication of the study was that RA and LA seem to behave differently with increasing volumes with partially different atrial deformation response even in healthy circumstances. However, we could ask: what could be the reason for these differences? RA and LA show alterations in their morphology, size and volume during the cardiac cycle with pressure and venous inflow (12,14). Atrioventricular valves (tricuspid vs. mitral valves) with their structural differences (for instance in the number of leaflets or in the length of papillary muscle and tendons) could affect the results as well (15,16). Essential differences in central pumps of the pulmonary (right ventricle-engined) and systemic (LV-engined) circuits are also known and well documented (11,17). However, further studies are warranted for better understanding the human physiology and pathophysiology of the RA for which novel non-invasive imaging methodologies like 3DSTE (or magnetic resonance imaging) theoretically make optimal opportunities.

There were several important limitations:

Increasing RA volumes do not cause significant increase in RA contractility represented by strains, but reduction in strains in longitudinal and circumferential directions could be detected in end-diastolic booster pump function. In contrast to LA, obvious signs of Frank-Starling mechanism could not be detected for RA.

Conflicts of Interest: Both authors have completed the ICMJE uniform disclosure form (available at https://qims.amegroups.com/article/view/10.21037/qims-22-307/coif). AN serves as an unpaid editorial board member of Quantitative Imaging in Medicine and Surgery. The other author has no conflicts of interest to declare.

Ethical Statement: The authors are accountable for all aspects of the work in ensuring that questions related to the accuracy or integrity of any part of the work are appropriately investigated and resolved. The study was conducted in accordance with the Declaration of Helsinki (as revised in 2013). The study was approved by the Institutional and Regional Human Biomedical Research Committee of University of Szeged (Hungary) (No. 71/2011 and updated versions) and informed consent was taken from all the subjects.