A 68-year-old male patient with hypertension for 20 years was admitted to our hospital due to lumbodynia of unknown etiology for the past two months. Polyuria, urgency of urination, and urodynia were absent. The patient denied history of trauma or surgery. No abnormalities were found in the physical examination. Laboratory examination revealed no abnormalities of the liver, renal function, blood, or urine analysis. The patient received imaging examinations.

First, the patient underwent an ultrasound examination of the urinary system by a Resona7 ultrasound system (Mindray, China) equipped with an SC6-1U (1–6 MHz) transducer. The grayscale ultrasound image demonstrated a multi-locular cystic mass with multiple septa (≥6) and calcification in the upper part of the left kidney. The mass was approximately 9.1 cm × 6.4 cm, with an irregular shape and sharp margins (Figure 1A). Color Doppler flow imaging (CDFI) displayed dot-linear blood flow signals in some septa (Figure 1B). In CEUS, the parameters of the machine, including depth, gain, and focus, were thoroughly adjusted for the optimal display according to the operator’s experience. During the whole process of CEUS, the mechanical index setting was 0.078. Meanwhile, 1.2 mL UCA SonoVue (Bracco, Milan, Italy) suspension was injected through the patient’s cubital vein followed by 5 mL saline flush. The timer was started when the contrast agent injection was completed. Taking the normal renal parenchyma as a reference, the SonoVue reached the mass in 14 seconds after administration, and the wall and septa of the mass showed homogeneous mild hyper-enhancement in the cortical phase (Figure 2A). The mass had many uneven thickened septa (the thickest septum was approximately 6 mm) without obvious wall nodules. In the parenchymal phase, the wall and septa displayed hypo-enhancement (Figure 2B,2C). No enhancing solid components were observed during CEUS. According to CEUS-adapted Bosniak classification (5), the mass was classified as Bosniak III. Then, CT examination was performed with a uCT780 scanner (UNITED IMAGING, China), with injection of the contrast agent iohexol (300 mg/mL, dose 1.5 mL/kg). Unenhanced CT revealed 8.7 cm × 6.3 cm low density mass within multiple linear slightly high-density shadows and patchy calcification in the left kidney (Figure 3A,3B). Contrast-enhanced CT (CECT) demonstrated a few thickened (≥3 mm) continuous enhancement septa during the nephrographic phase of the mass. Meanwhile, most areas of the mass displayed no enhancement during the whole scan (Figure 3C,3D). According to Bosniak classification, version 2019 (4), the mass was classified as Bosniak IIF.

Figure 1 Ultrasound showed a complex cystic lesion with many septa. (A) The septa were thick and uneven. Some septa had calcification; (B) Color Doppler flow imaging displayed dot-linear blood flow signals in some septa. 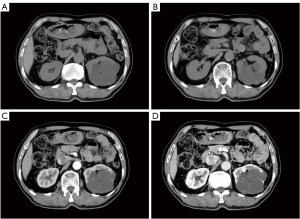 Thereafter, the patient underwent left nephrectomy to remove the mass. Macroscopically, the mass measured 9.0 cm × 8.0 cm × 7.0 cm. Microscopic examination showed that the tumor consisted of lymphatic and blood vessels (Figure 4A). Immunohistochemistry revealed positive expression of CD31, CD3, D2-40, and ERG (Figure 4B-4E). Based on the morphological and immunohistochemical analyses, the final pathological diagnosis of the mass was a renal hemolymphangioma. No evidence of malignancy was found. The patient had rapid postoperative recovery and was subsequently discharged with recovery from the hospital after 12 days. To date, the patient has been following-up for 2 years, and no abnormalities were found in regular imaging examinations every 6 months.

Hemolymphangioma is an extremely rare, benign tumor originating from mesenchymal tissue, which may be caused by the developmental defects or abnormalities in angiogenesis and lymphangiogenesis. The tumor consists of abnormal lymphatic and blood vessels with polycystic spaces (9), and is usually found in the head, axilla, and neck. Although it is considered a benign neoplasm, hemolymphangioma can invade surrounding organs and recur after treatment (10-12). Surgical resection is often the main treatment, although it can recur after surgery. The recurrence rate after complete resection of the lesion is 10–27%, and the recurrence rate after partial resection is 50–100% (13). In general, hemolymphangioma presents as a large cystic mass with various-sized cavities and thin walls. Some reports (14,15) indicated that the tumor size varies due to the anatomical location and relationship with the neighboring tissues. Hemolymphangioma has historically demonstrated a female predilection (2.25:1 female to male) and presentation in the third to fourth decades of life (11). A literature review indicated that that the clinical symptoms were nonspecific, and atypical abdominal pain or compression discomfort of nearby anatomic structures was the primary reported manifestation (16).

Hemolymphangioma often presents as a well-defined multi-ocular cystic mass on imaging (2,13). However, these appearances are similar to some complex renal cystic masses, such as lymphangioma. Lymphangioma can occur in any part of the body, usually due to congenital abnormal development of lymphatic vessels, pathologically manifesting as lymphatic structures. It is challenging for any imaging modality to accurately differentiate the two types of tumors. The final diagnosis is based on a combination of clinical, radiological, and histopathological findings. D2-40 is a marker of lymphatic endothelium, which is strongly expressed in lymphatic endothelium, but not in blood vessel endothelial cells (17). CD31 is regarded as the most sensitive and specific immunohistochemical marker for the detection of endothelial differentiation. CD34 is strongly expressed in hemangiomas and other vascular tumors (18). Positive expression of D2-40 and CD31/CD34 can provide an important basis for the diagnosis of hemolymphangioma.

Herein, we reported a rare renal hemolymphangioma, which appeared as a large, complex cystic mass on imaging and was classified as different class by CT-based Bosniak classification, version 2019 and CEUS-based Bosniak classification. For better specificity and reporting standardization in the categorization of renal cystic masses, CEUS-based Bosniak classification needs to be improved, based on the unique characteristics of the CEUS examination. Although renal hemolymphangioma is often difficult to diagnose due to its low incidence, nonspecific clinical and imaging features, it is necessary for doctors to further accumulate experience and make a comprehensive judgment in combination with other clinical data and imaging findings to improve diagnosis, treatment, and outcomes.

This manuscript has been released as a preprint at Research Square source (Wang H, Yang D, Luo Y, Peng YL, Ling WW. Contrast-enhanced Ultrasound Findings of Hemolymphangioma of the Kidney: The First Report in the Literature, Research Square, 2020. DOI:10.21203/rs.3.rs-54604/v1).

Funding: This research was supported by a grant from the Sichuan Science and Technology Program (No. 2020YFS0211).

Conflicts of Interest: All authors have completed the ICMJE uniform disclosure form (available at https://qims.amegroups.com/article/view/10.21037/qims-22-518/coif). The authors have no conflicts of interest to declare.