Meningeal carcinomatosis (MC), also known as carcinomatous meningitis or leptomeningeal metastasis, is an unusual phenomenon characterized by the metastasis of cancer cells to the leptomeninges. The incidence of MC in patients with solid tumors is 5–8% and that in patients with hematologic malignancies is 5–15% (1). Early diagnosis and timely treatment of MC are crucial for improving the prognosis of patients. However, the early-stage diagnosis of MC remains challenging, with nonspecific presenting symptoms and insufficient sensitivity of auxiliary examinations. Contrast magnetic resonance imaging (MRI) is very suggestive in the diagnosis of MC, which shows irregular or nodular leptomeningeal or dural enhancement. In contrast, traditional MRI sequences of patients with MC often have no specific brain lesions (2). Here, we describe a case of superficial cerebellar microbleeds and siderosis associated with MC. To our knowledge, there have been no published reports about susceptibility-weighted imaging (SWI) findings of MC.

A 66-year-old female was referred to our hospital due to sudden diplopia with dizziness for 7.5 hours. The patient had a history of lung adenocarcinoma for 1 year and was treated with gefitinib. Physical examination revealed right abducens nerve palsy. Acute ischemic stroke was initially considered because there was no obvious abnormality on brain computed tomography (CT) scan. The patient was subsequently treated with oral aspirin 100 mg/day, clopidogrel 300 mg loading dose followed by 75 mg/day, and atorvastatin 20 mg/day. One day later, the traditional MRI sequence did not reveal any abnormal lesions. However, SWI showed that multiple superficial microbleeds and siderosis were distributed on the surface of the bilateral cerebellum (Figure 1A-1C), but not in other regions. Cerebral microbleeds (CMBs) or superficial siderosis were favored to represent cerebral amyloid angiopathy (CAA) and hypertension. The patient had no cognitive impairments or dementia after a comprehensive neuropsychological assessment. Monitoring of 72-h ambulatory blood pressures showed a normal level. 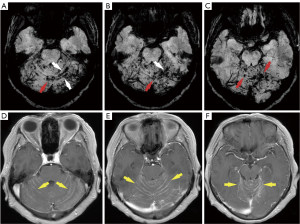 CMBs may arise from a broad spectrum of different etiologies, such as CAA, hypertensive vasculopathy, brain abscess and primary intracranial tumors. Recent studies have shown that superficial cerebellar microbleeds and siderosis may be new markers of CAA (3,4). The distribution of CMBs and the clinical course of patients can be useful to identify the etiology of CMBs. Specifically, CMBs distributed in deep brain territory or infratentorial regions are related to hypertensive vasculopathy, whereas multiple microbleeds strictly distributed in lobar brain regions are usually associated with CAA (5). However, our patient had no previous history of hypertension or recurrent cortical hemorrhage, the clinical symptoms excluded cognitive impairment, and the superficial microbleeds and siderosis were limited to the cerebellar cortex. In addition, other imaging markers of CAA or hypertensive vasculopathy include white matter hyperintensity (WMH), lacunar, enlarged perivascular space (PVS), and cerebral atrophy (6,7), which were not found in our case. Hence, we believe that the evidence of the coexistence of MC with CAA or hypertensive vasculopathy is limited.

Early laboratory studies demonstrated that the blood-brain barrier (BBB) of the MC mouse model was disrupted and that capillary permeability was increased (8,9). Other studies have also shown that BBB disruption might play a pivotal role in the pathogenesis of CMBs or cortical superficial siderosis (cSS) in cerebral small vessel disease (CSVD), especially CAA (10,11). In our case, the distribution of superficial microbleeds and siderosis shown by SWI is consistent with the contrast MRI findings. Therefore, we speculate that the superficial microbleeds and siderosis may be secondary to MC. The underlying mechanism can be explained by the leakage of leptomeningeal vessels due to BBB disruption (12).

To our knowledge, there have been no case reports examining the use of SWI in MC. This case highlights that MC should be added to the list of superficial cerebellar microbleeds and siderosis differential diagnoses. At present, the pathological mechanism underlying these imaging findings remains unclear. Therefore, further studies are needed to confirm these findings further and to clarify the potential mechanisms.

Conflicts of Interest: All authors have completed the ICMJE uniform disclosure form (available at https://qims.amegroups.com/article/view/10.21037/qims-22-727/coif). The authors have no conflicts of interest to declare.