Diffuse large B cell lymphoma (DLBCL) is an aggressive lymphoma and the most common form of non-Hodgkin lymphoma. Despite the increased use of position emission tomography-computed tomography (PET-CT), its role in surveillance imaging remains under debate (1,2). PET-CT imaging is superior to CT alone in detecting active disease and therefore plays a major role in determining response to therapy. However, CT gives a better description of the lesion’s characteristics and morphology (3).

PET is frequently used to differentiate between malignant and benign lesions in various organ systems. Its role in defining lesions of the musculoskeletal system is less clear. One study used fluorine 18 fluorodeoxyglucose (18F-FDG) positive uptake depicted by standardized uptake value (SUV) to determine if it can discriminate between benign and malignant bone lesions (4). Results revealed a sizeable amount of overlap between the two lesions with some benign lesions having high 18F-FDG -uptake.

This report describes the use of PET-CT for clinical follow-up of a patient with DLCBL in which a hypermetabolic focus with progressively increasing FDG activity on PET-CT could have been misdiagnosed as malignancy.

A 65-year-old male with a history of transformed DLBCL presented to clinic for follow up. The year prior, he was treated with a T-cell therapy that targeted the B-cell antigen CD19 (5). He was assessed as a partial responder two months afterwards (Figure 1). Five months after the start of therapy, during surveillance imaging, a small hypermetabolic focus was observed adjacent to the left humeral head with a maximal SUV (SUVmax) of 6.3 and was thought to be degenerative (Figure 2). Four months later PET-CT revealed the same hypermetabolic focus with a SUVmax of 12.2 (not shown). Of note, the patient reported a chronic history of arthritis in both shoulders. At the time of imaging, his arthritis had intensified in the recent weeks due to increased activity. PET findings were thought to be atypical for arthritis. Due to location and increasing metabolic activity, there were concerns as to whether the finding related to a new lymphoma. Two months later, the patient still complained of mild left shoulder pain that had not changed from his previous clinic visit. PET-CT at this time showed increased uptake near the anterior left humeral head with a SUVmax of 13.0 (Figure 3). The focus amplified somewhat in size and significantly in intensity since initial appearance. 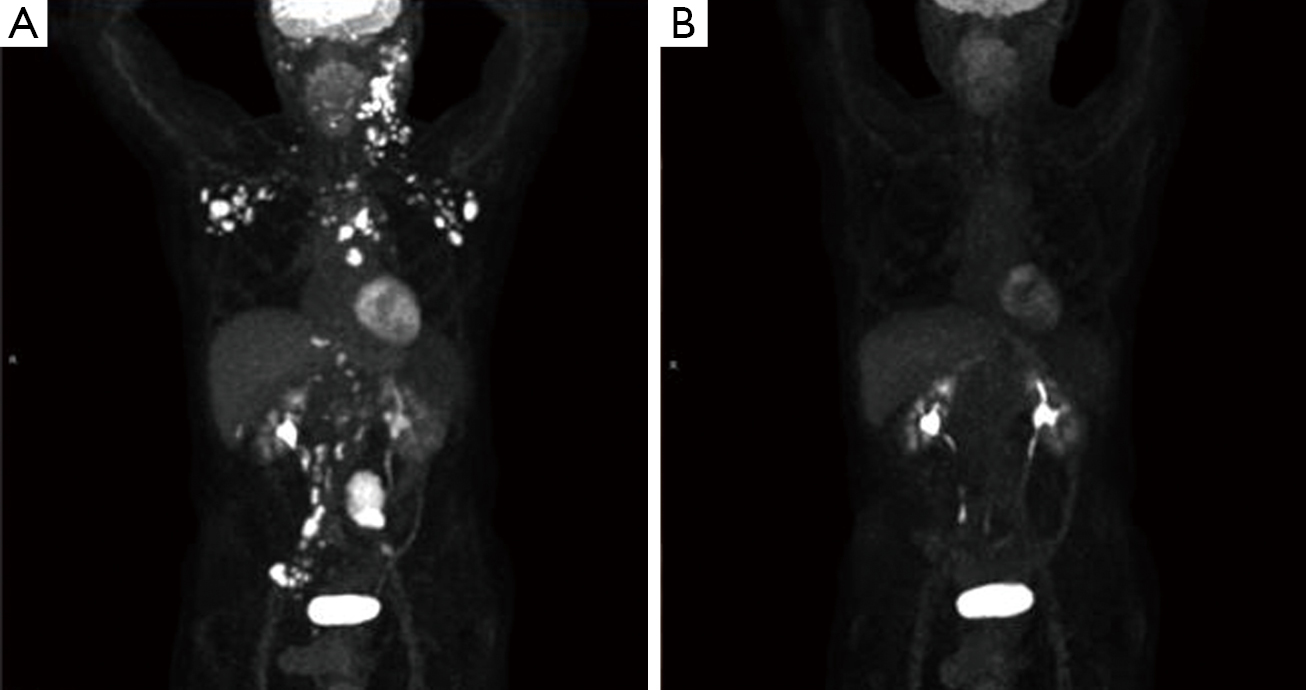 Figure 1 Anterior maximum intensity projection (MIP) images of the 18F-FDG PET (A) obtained prior to therapy in September of 2014; (B) MIP PET images obtained 2 months after patient started his chemotherapy in November 2014, which was labeled as a partial responder because of the remaining mild retroperitoneal disease. PET, position emission tomography; 18F-FDG, fluorine 18 fluorodeoxyglucose. 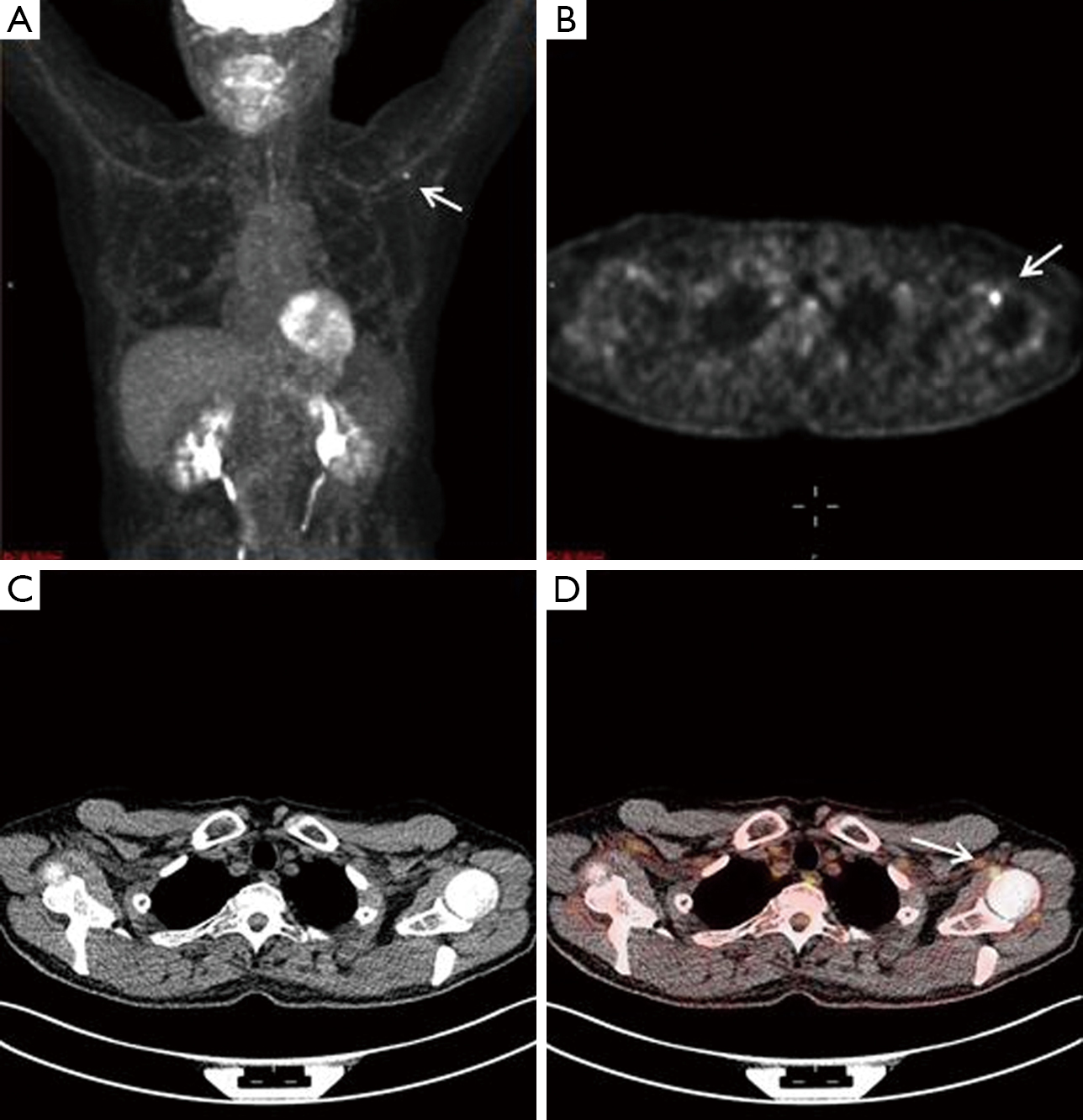 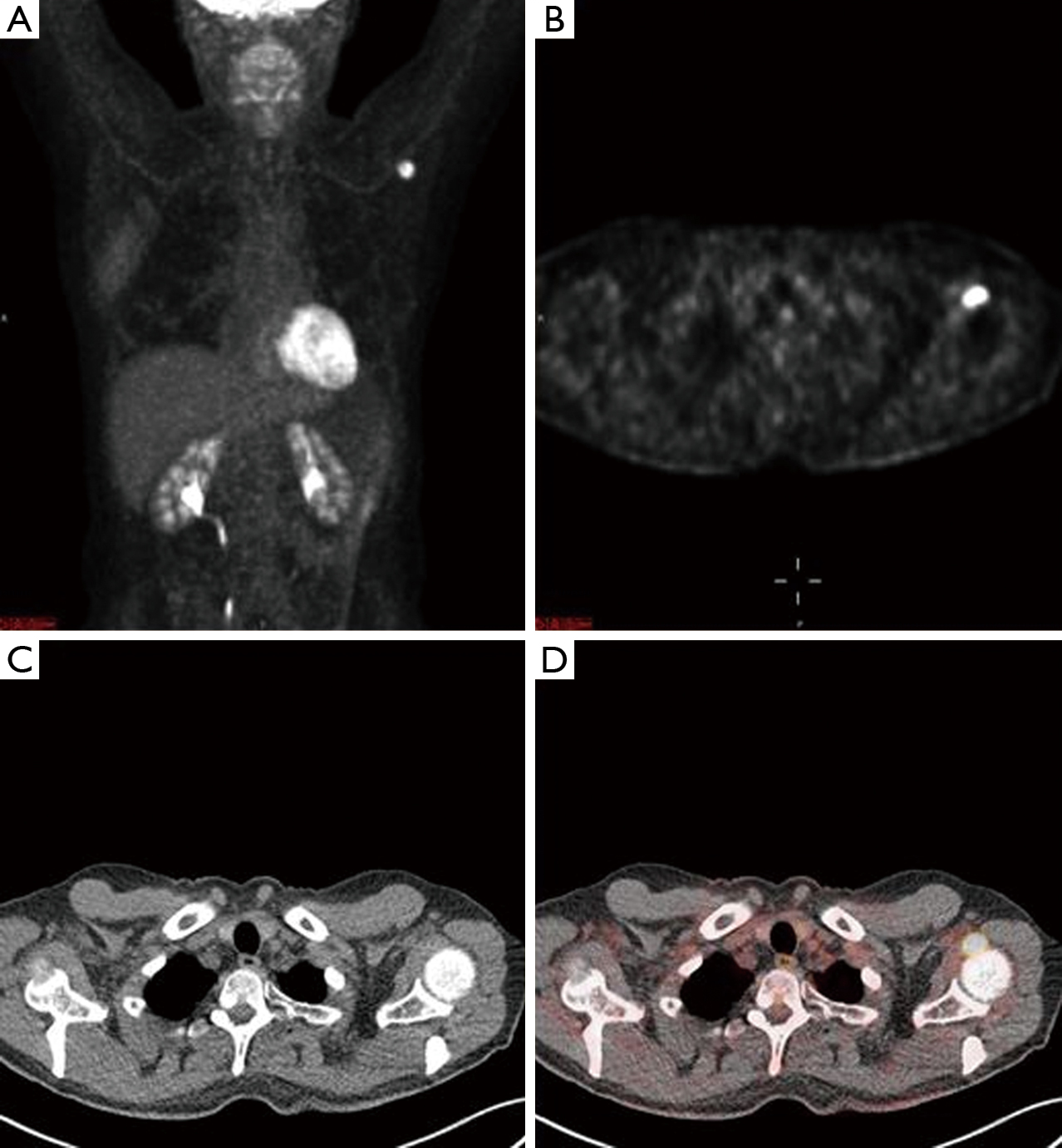 Figure 3 18F-FDG PET image obtained at 11 months after the start of the therapy. The FDG-avid lesion increased in intensity since the prior, with a previous SUVmax of 6.3 increasing to 13.0. PET, position emission tomography; 18F-FDG, fluorine 18 fluorodeoxyglucose.

An magnetic resonance imaging (MRI) was obtained to further delineate the findings observed on PET-CT. MRI of the shoulder revealed a corresponding 1.6 cm × 1.4 cm mass like lesion of decreased signal intensity on T1/T2 imaging with the appearance of pigmented villonodular synovitis (PVNS) (Figure 4). Repeated PET-CT imaging performed about 2 months later showed the same hypermetabolic activity that persisted near the left humeral head with a higher SUVmax of 16.3 (Figure 5). MRI findings remained relatively stable with a possible minor increase of the left synovial space lesion to 1.7 cm × 1.5 cm with mild heterogeneous post contrast enhancement (not shown). Once the diagnosis of PVNS was reached it was ultimately decided to discontinue further MRI imaging unless the patient worsened clinically or on PET imaging. 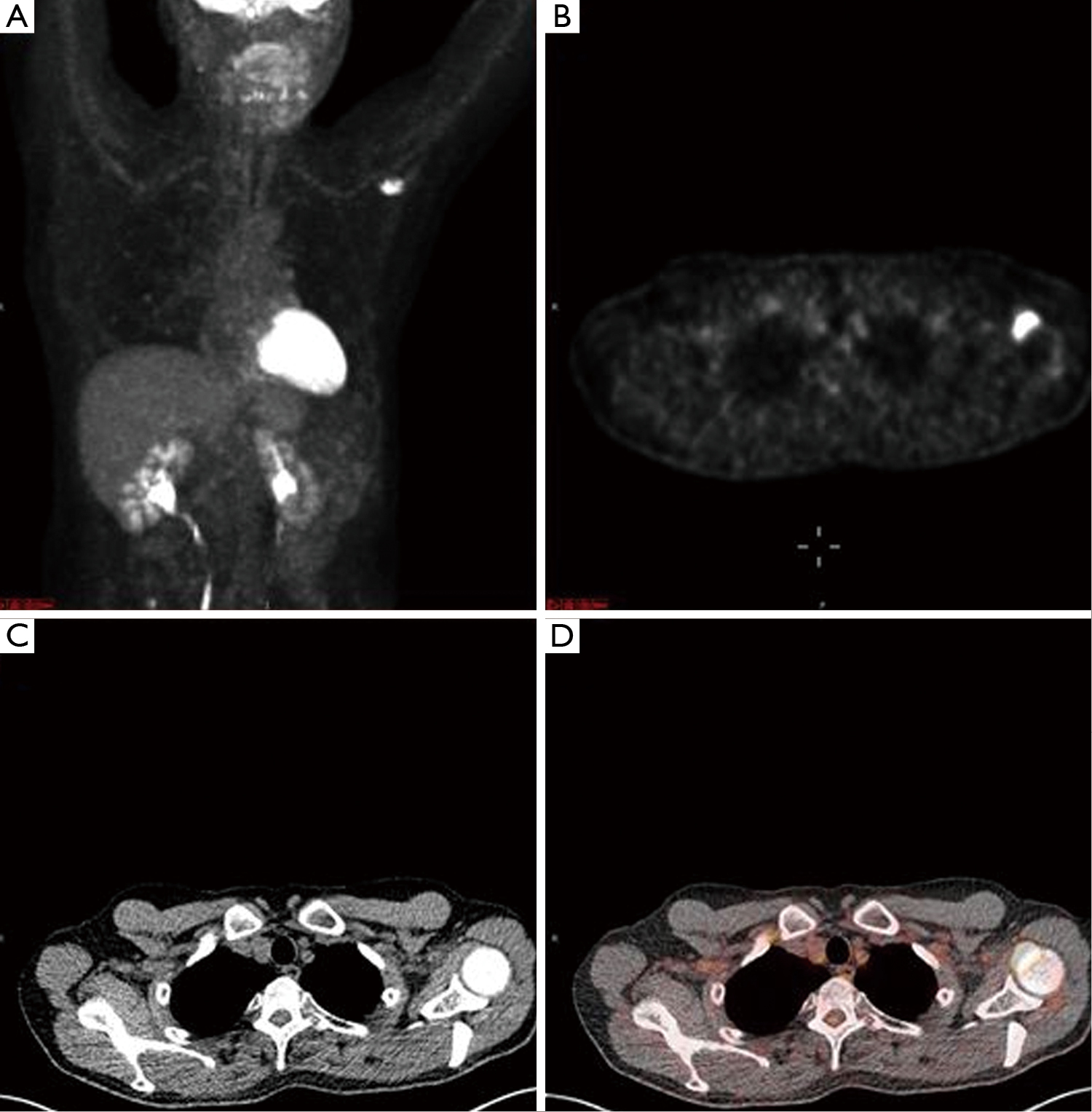 PVNS is a rare condition of unknown etiology with a prevalence of 1.8 cases per 1 million (6). The synovium characteristically displays inflammation and the overgrowth leads to the formation of a benign mass. The synovium in PVNS also produces extra fluid which causes swelling and pain in the affected joint (6,7). Localized PVNS, the more common type, primarily involves tendons that support the joint while the diffuse type involves one compartment or an entire synovium. It primarily affects the knee with reports ranging from 66–80% of cases. Other sites include hips, ankle, shoulder and elbow in descending order of prevalence (6,8).

It is currently unknown how many, if any, patients with a history of non-Hodgkin lymphoma also presented with PVNS over the course of treatment and/or follow-up. PVNS is often an incidental finding and the nonspecific nature of clinical symptoms often delays definitive diagnosis to an average of 2–3 years (8). Another reason for the delay in diagnosis lies in the fact that PVNS can mimic other conditions such as joint effusions, amyloidosis, severe osteoarthritis, myeloma and metastatic disease as well (6).

MRI along with clinical presentation confirms the diagnosis of PVNS. It also provides further detail in identifying lesions for surgical treatment. Characteristic findings include nodular intra-articular masses that display low signal intensity on T1, T2 sequences (57%) and proliferative synovitis (86%) with a hyperplastic and hypervascular synovium (7,9,10). Increased iron content in PVNS lesions explains the low intensity signal observed on MRI. The MRI findings of PVNS may be quite specific for the diagnosis as in the current case. In contrast, the MRI of lymphoma shows T1 signal that is isointense to muscle and a slightly increased T2 signal compared to adjacent musculature. Thus, recurrent lymphoma was excluded as an etiology in the current case. Contrast enhanced CT, the less favored imaging modality, demonstrates hyperdense areas due to hemosiderin deposition (10,11). Additionally, hypervascular areas around the affected synovium can also be observed. CT images of the left shoulder in our patient, demonstrated a modest increase in tissue density of the lesion as well (Figure 6). 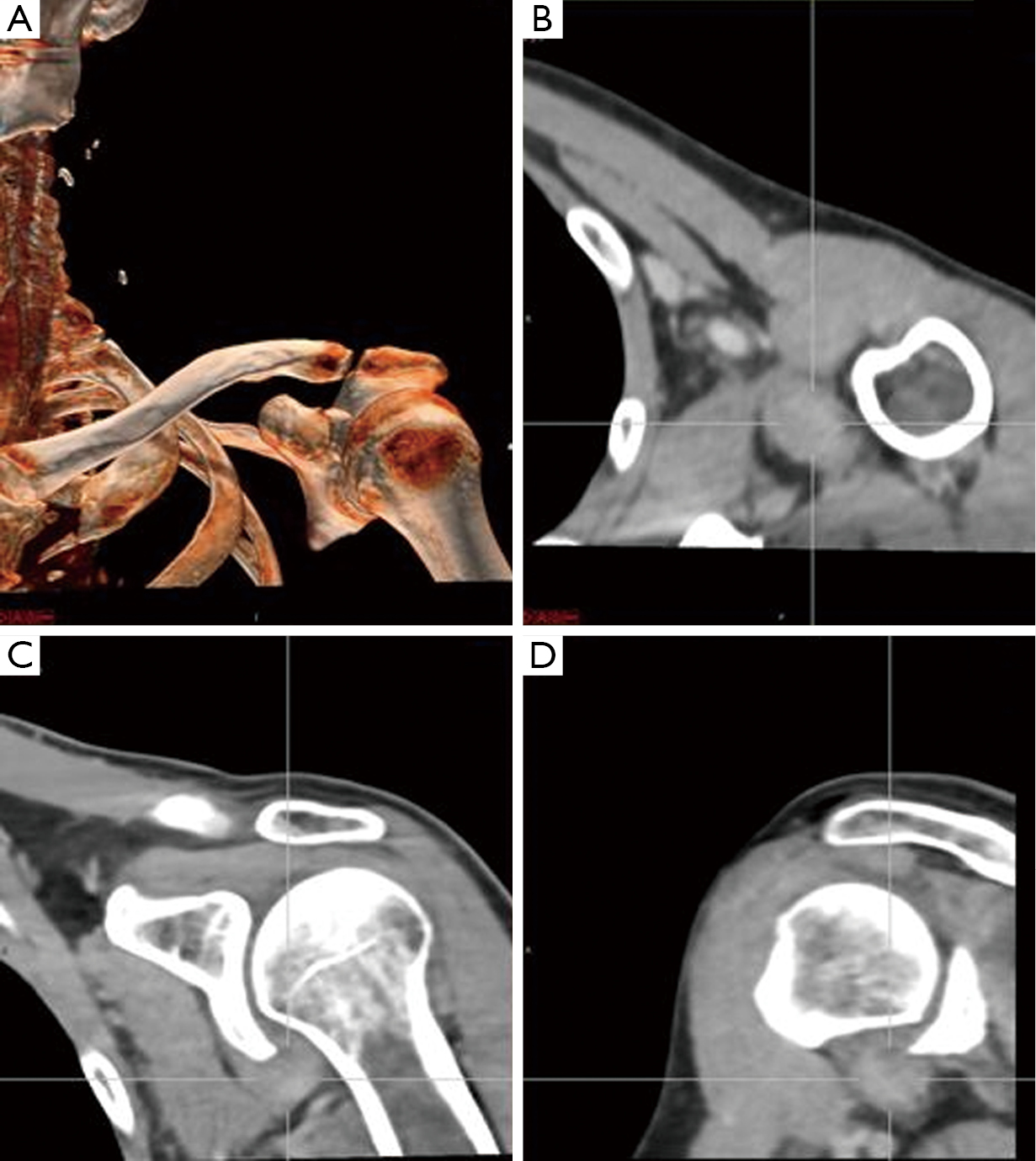 Figure 6 Contrast computerized tomography obtained at 11 months after the start of the therapy (August 2015). The 1.6 cm × 1.5 cm lesion near the left humeral joint (cross-hair) has a CT density of 99 vs. 85 HU of normal muscle density. This lesion was not discernable on the CT portion of the PET-CT study, which was obtained with patient’s arms over his head as opposed to his arms on his side on the dedicated contrast study. CT of the neck was acquired on a Siemens Dual energy source CT, FLASH. (A) 3D; (B) axial; (C) coronal; (D) sagittal images. PET-CT, position emission tomography-computed tomography.

Of particular interest, the SUVmax of the lesion in this case increased significantly over the course of eight months (from 6.3 to 16.3). This observation provides another example of a benign soft tissue tumor displaying a high and variable SUVmax. Further investigation needs to address utility of 18F-FDG PET-CT in surveillance imaging and also the discrimination of malignant or benign soft tissue tumors. Imaging physicians should be aware of such diagnosis so that PVNS can be entertained in the differential diagnosis and the misperceived diagnosis metastatic disease could be avoided.

FDG-PET positive lesions found on surveillance imaging post therapy are likely thought to be of metastatic nature especially when increasing activity is noted. This case served as a reminder that not all FDG-positive lesions are a result of metastasis of the primary lesion even though it might be present in the vicinity of previously detected malignant lesions as was in the case presented. Since 18F-FDG is not a tumor specific agent, its diagnostic power in discriminating between malignant lesions from a benign is limited. While some studies have investigated SUVmax role in distinguishing between metastatic and benign lesion it is not completely reliable. Both awareness of manifestations of PVNS as a focal FDG avid lesion along with the utilization of PET-CT studies might decrease the false positive diagnosis of metastasis and/or upstage a patient with a known metastatic disease.

This work was sponsored by the NIH Intramural research program.